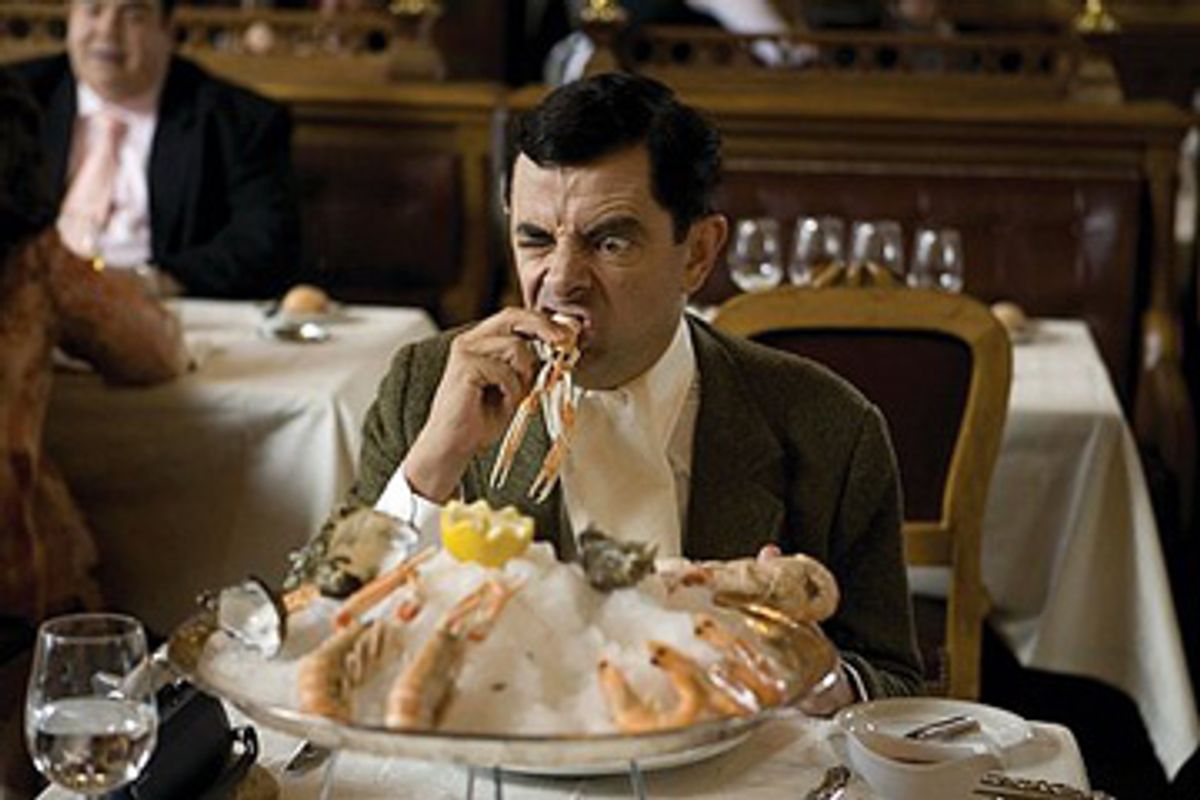 Rowan Atkinson's facial expressions have the precision of emoticons: When he's angry, dejected, annoyed or puzzled, you can read it all in his backslash eyebrows, in the angle bracket of his mouth. And you have to, because as Mr. Bean -- the character he brought to life first in a popular British television series and later in the 1997 picture "Bean" -- he's virtually silent. When Mr. Bean does speak, he squeezes out the words, only one or two at a time, in a strangled, guttural monotone; you can almost count the seconds it takes for his thoughts to take shape in his brain and travel by ramshackle go-cart to his vocal cords before they emerge, triumphantly, from his lips. In "Mr. Bean's Holiday," when a pretty French waitress compliments him on his French -- he has pronounced the words oui and non exquisitely -- he responds with the wrong word at just the right moment: "Gracias."

It seems that many moviegoers and critics have relegated the Mr. Bean character and the Mr. Bean movies (this one included) to the kid-stuff pile, that sad category of third-tier entertainment that's good enough for little tykes but not intelligent enough for adults. Where people get these ideas, I have no clue. I've already spotted some yawning, hipper-than-thou reviews on Rotten Tomatoes, claiming that Atkinson is just ripping off Jacques Tati. These critics seem to have grasped the obvious homage of the movie's title -- an unmissable riff on "M. Hulot's Holiday" -- and stopped there, deciding with a snort that Tati's brand of physical humor is genius, while Atkinson's is just vulgar.

"Mr. Bean's Holiday" does pay obeisance to Tati, but perhaps even more so to Chaplin, Keaton and Lloyd: This is silent-movie comedy stripped of art-house pretensions, not steeped in them. Atkinson shows a clear admiration for Tati's way with a sight gag, but he has none of Tati's measured, test-tube preciousness. If your idea of a fun night out is tittering "Oho!" behind a gloved hand, then "Mr. Bean's Holiday" probably isn't for you.

"Mr. Bean's Holiday" -- the director is Steve Bendelack; Hamish McColl and Robin Driscoll wrote the screenplay, from a story by Simon McBurney -- may be a gentle-spirited picture. But the character of Mr. Bean (who was co-created by Atkinson and Richard Curtis) is anything but gentle, or even lovable. Bean is an irritating naif: Despite his haplessness, he asserts his imagined superiority in every situation. In "Mr. Bean's Holiday," this insouciant English miscreant, his matchstick limbs clad in trousers and tweedy jackets that look as if they've been shrunk in the wash, wins a trip to Cannes, France, and a video camera. The first leg of his trip brings him to Paris, where he needs to hop a train to Cannes, a train he actually doesn't miss. But he persuades a friendly bystander to videotape him boarding the train, a task that should be simple but, because of Mr. Bean's insistence on cinematographic perfection, isn't. And so the bystander, who happens to be a famous Russian director en route to Cannes himself (played by Karel Roden), is the one who misses the train. His young son, Stepan (Max Baldry), has already boarded. When Mr. Bean realizes what has happened, he tries to help the kid, as much as Mr. Bean ever cares to help anyone at all: He's a deeply selfish character, occasionally motivated by a good impulse but quick to eschew generosity when it stands in the way of getting what he wants.

So Mr. Bean, motivated by his consuming desire to get to the beach (and videotaping every mundane detail on the way), suffers a series of mishaps: He leaves his passport and wallet on top of a pay phone. When he tries to board a bus leaving a French marketplace, the ticket flies out of his grasp and becomes stuck to the foot of -- what else? -- a chicken, which is shortly thereafter hustled onto a truck headed out to the countryside. Bean "borrows" a bicycle to pursue the chicken: His single-mindedness is one of his purest qualities. Out in the country, he stumbles onto the set of a yogurt commercial, being filmed by a highfalutin director (Willem Dafoe, in a marvelous, tossed-off performance) and featuring a sweet French starlet (Emma de Caunes). Mr. Bean eventually befriends her, but not before executing a comically precise goose step in a borrowed Nazi costume. Because in Mr. Bean's world, any opportunity to do a goose step is not to be missed.

In fact, there isn't an obvious joke that Atkinson, as Mr. Bean, won't pursue. Obviousness isn't a deterrent to Bean, or to Atkinson; it's the key to the universe. Bean knows, as Atkinson does, that the fact that we've all seen a sight gag before is a plus, not a minus; if anything, the more often you've seen a sight gag, or a bit of physical humor, the funnier it becomes, as long as an actor puts his stamp on it. Even the angle of an elbow, the arch of an eyebrow, can make a difference.

The Mr. Bean character gives Atkinson endless opportunities to make that kind of selfish self-determination work. When, navigating the aisle of a jostling train car, Bean spills his latte onto a fellow passenger's laptop, he doesn't just sneak off in shame: He must stop to drain the coffee out of the keyboard and back into his cup, even scooping the last bit of foam off the surface of the keys. And with his new toy, the video camera, he's less interested in capturing the beauty of the scenery around him than in turning the lens on himself, obsessively capturing every grunt, every self-satisfied expression. He never misses a chance to remind himself of his own supremacy in the world.

Until, of course, the end, when Mr. Bean opens himself, just a little, to that world and actually ends up helping -- inadvertently, but still -- some of his fellow human beings. "Mr. Bean's Holiday" is beautifully worked out, and the movie's final sight gag, set to Charles Trenet's shimmery seaside masterpiece, "La Mer," is a gracefully orchestrated bit of silliness that's a visual love sonnet to Chaplin, Lloyd, Keaton and, yes, Tati: Atkinson's Mr. Bean, a man of few words, carries their memory in his rubbery bones. When it comes to knowing where he came from, he's got the beat.