Scarlett Johansson stars in this enjoyable, whimsical adaptation of the bestselling novel. 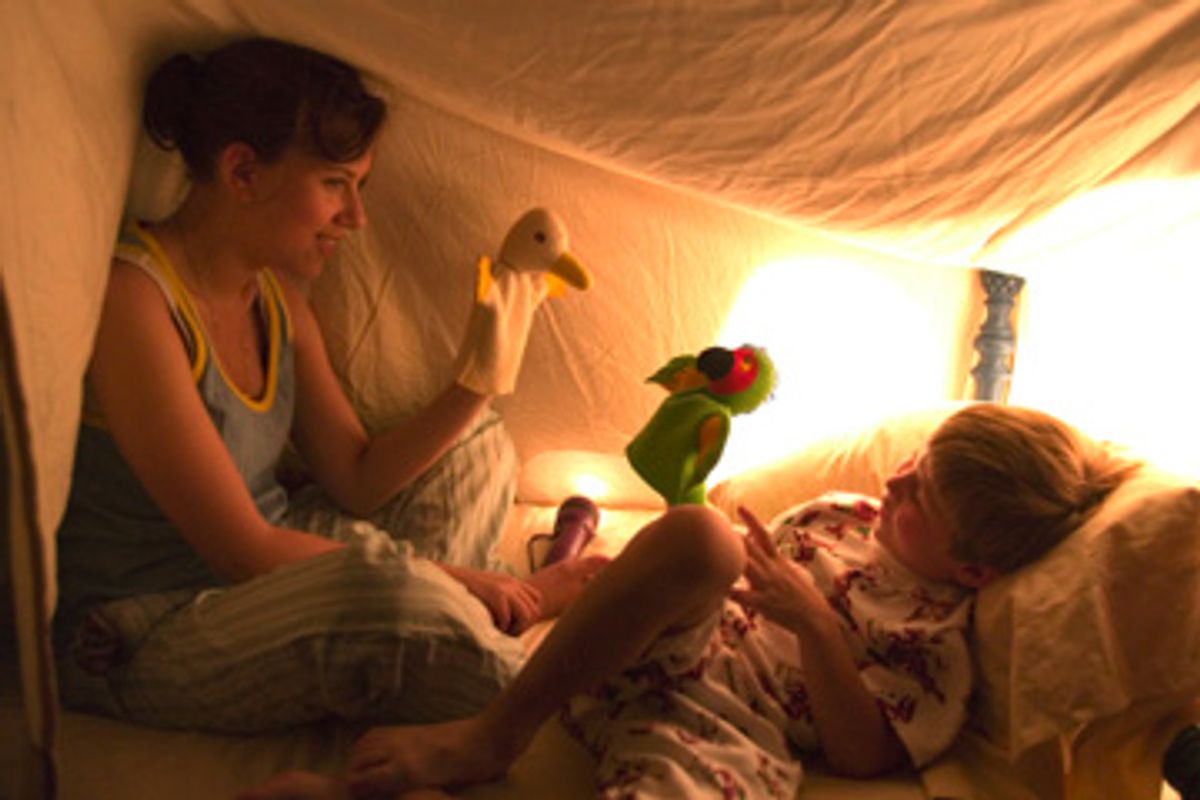 The more cluttered the mainstream-movie landscape becomes, the more we hear of "troubled" movies, pictures that critics and bloggers are primed to dislike long before they're even screened -- if they're even screened. "The Nanny Diaries," directed by Shari Springer Berman and Robert Pulcini -- the filmmakers behind the marvelous and inventive "American Splendor" -- was supposed to open last spring; the Weinstein Co., after consulting its inscrutable Ouija board, first delayed the picture's release until Sept. 7, and then suddenly pushed it forward to Aug. 24. Before that, we all heard vague murmurs about reshooting and reediting. The bright lights who write the previews over at IMDb were long ago chattering about why "the filmmakers behind the trenchant, intellectually challenging 'American Splendor' chose this chick-lit cream puff of a book for their follow-up." Tying their thinking caps even more firmly around their hollow skulls, they further mused, "If the trailer is any indication, the comedy is as broad and obvious as it comes -- think Lindsay Lohan vehicle and you're on the right track."

No wonder the moviegoing experience -- specifically, the act of trekking to the multiplex to see a picture -- is in trouble. "The Nanny Diaries" is an adamantly unterrible picture, a reasonably enjoyable diversion made by filmmakers whose intelligence and judgment are apparent even when they're working from a "cream puff." (Berman and Pulcini adapted the movie themselves from the perfectly entertaining 2002 novel by Emma McLaughlin and Nicola Kraus, a supposedly semiautobiographical but obviously highly varnished story of a college-grad nanny who goes to work for a frightful rich-bitch mom on New York's Upper East Side.)

"The Nanny Diaries" has some problems: It loses too much steam in the last third, and it feels perhaps 10 minutes too long. It also suffers from that overused and lazy technique, voice-over-itis. But this "troubled" picture is far more enjoyable than slick, aggressively hyped duds like "The Devil Wears Prada." It may be polished, but unlike that picture, it doesn't feel canned. And we can suffer worse fates than getting to look at Scarlett Johansson for an hour and 40 minutes: The role doesn't demand much of her -- she's simply playing a young woman in her first, lousy job out of school -- but the performance is at least subdued and believable. It's the kind of turn for which you get out the carving knives only if you really have nothing better to do in life.

Johansson plays Annie, a Jersey girl who has just graduated from college with a semiuseless anthropology degree. Her mom, a hardworking nurse (played by Donna Murphy), wants her to go into finance. But Annie, like most people of her age, isn't quite sure what she wants, so she falls into a job that she thinks, at first, might be fun: She becomes the caretaker for a preschool-age kid with the ridiculously pretentious name of Grayer (Nicholas Art), whose mom is an icy trophy wife known only as Mrs. X (a deliciously reptilian Laura Linney).

The job seems OK at first, until Annie realizes that the high-strung, controlling Mrs. X is a monster to work for, the kind of woman who has no job and yet who thinks shopping is far more important than spending time with her child. But Mrs. X is also deeply unhappy in her sham of a marriage to Mr. X, a captain of industry played with villainous relish by Paul Giamatti: The tensions between them cause their child a great deal of suffering. Annie, mistreated and underappreciated, bonds with her young charge -- he's a decent kid, despite the fact that his parents are assholes -- and also with the other nannies, many of them women of color, or women (of all ages) who have come from other countries to make a better living, often leaving their own families behind to care for rich American ones.

"The Nanny Diaries" isn't heavy-duty satire, but it doesn't turn a blind eye to class and race issues, either. Annie falls for a cute guy in the X family's building: Not wanting to get too attached to him, owing to their class differences, she refers to him only as the "Harvard Hottie." (He's played, breezily, by Chris Evans.) But the movie is smart enough to show that even though Annie pays lip service to the idea that money can't buy happiness, she hypocritically continues to assume that it does. In a brief scene, late in the movie, Annie learns something about the money/happiness equation from the Harvard Hottie, a mark of the story's generosity toward its characters.

Berman and Pulcini add perhaps a few too many whimsical touches, including tableaux of Upper East Side life set up as if they were Museum of Natural History dioramas. Still, they never veer too deeply into the territory of "cute." Some of the actors here just don't have enough to do. Alicia Keys appears as Annie's best friend from home, and it's a pity she doesn't get more screen time: She's lively and likable. But whatever its faults are, "The Nanny Diaries" is hardly the disaster that the gossipmongers -- including, perhaps, even the studio that made it -- want us to believe. Troubled? Maybe. But at least it has a pulse. It's hardly DOA.