For three years, I "reported" on Elvis and aliens for the Weekly World News. Now it's published its last issue. The checkout aisle -- and my career -- will never be the same. 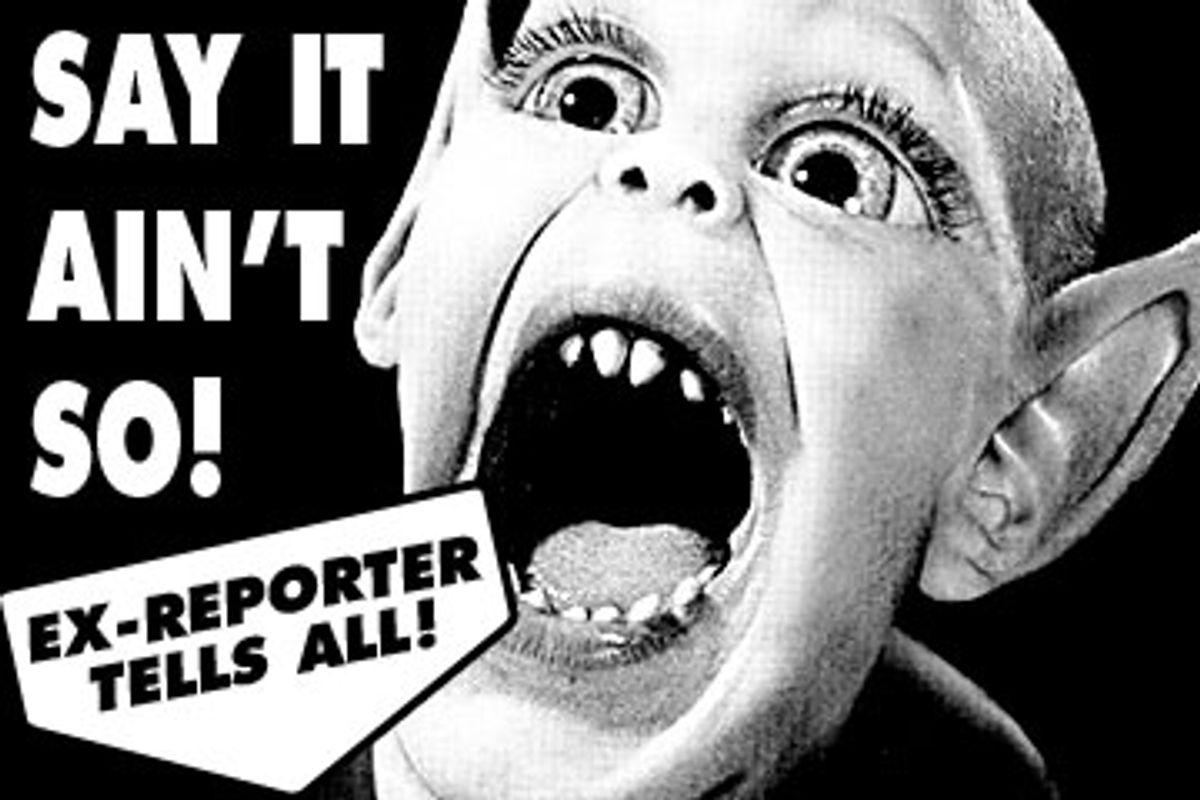 When I heard that the Weekly World News was suspending publication after 28 years with its Aug. 27 issue, I hoped that the story was as true as the stories in the paper itself, the ones about Elvis and Bigfoot and Bat Boy and the rap artist who had "reverse Tourette's syndrome," which forced him to say something nice every time he tried to curse. That is, not true.

My interest went beyond being a faithful reader: The Weekly World News was my livelihood. I wrote a lot of those stories.

For three years, under various pseudonyms (including Jake Anderson -- a play on Jack Anderson, the great muckraker of my youth), I "reported" that the real reason for global warming was that teenage space aliens were stealing our glaciers for party ice, that the judicial system was in chaos because a thief stole "the book" that judges throw at them, that leftovers from the Last Supper were found in a man's fridge, and that a man who killed a fly was arrested for "pesticide" (the police chief chided, "That's why we have a SWAT team"). And several hundred more "scoops."

The WWN burst onto supermarket shelves in 1979, birthed from a black-and-white printing press that was abandoned after the National Enquirer switched to color. The Enquirer ran "two-headed baby" stories and the Star cornered the market on celebrity meltdowns, but though the News shared an airline hangar-size office in Boca Raton, Fla., with several other tabloids, it distinguished itself by playing primarily for laughs.

I first encountered WWN, like most people, while waiting in a checkout line. The tabloids were always arranged in a hanging hierarchy, from top to bottom, according to "prestige." The Enquirer was the highest (which should give you an idea of the standards we're talking about here), followed by the Star, Globe, Sun, Tatler and, on the very, very bottom, in glorious black-and-white, the Weekly World News. I'd pick it up, pulled in by an absurd headline, and invariably laugh out loud. Occasionally there were so many funny items, I'd throw it in my cart, but never without first disclaiming to the checker, "Can you believe some people think this is real?"

You could never shake the suspicion that some folks actually believed that "February Sues for More Days" and that there was a "Hide-and-Seek Player Found After 34 Years," or that a "New Study Reveals Stitch in Time Only Saves Eight" -- and that was part of the paper's charm, of course. Nobody, not even the editors, knew how many readers put stock in their stories. But the fact that the advertisers consisted almost entirely of psychics, lucky-charm purveyors and astrologers -- and not a single car manufacturer (or even vacuum cleaner salesman) -- indicated that there were indeed consumers who believed the front-page claim that the News was "The World's Only Reliable Newspaper."

As both a writer and a reader, what I loved most about the WWN was that its stories existed in a parallel universe in which literally anything could happen. Spain's most popular matador battled bunny rabbits, not bulls; after 27 futile years a scientist found a "watched pot that boils" when his wife told him he had to put water in the pots; and a judge was scolded for having a "tip jar" on his bench. Who wouldn't want to live in a world where a traffic cop is so honest he gives himself a ticket for DUI, or a minister starts a Church of the Hokey-Pokey because "for every season, there's a left foot in, and a left foot out"?

Long before I wrote for them, I wondered how the staff came up with their nutty concepts. I imagined that the "newsroom" had a dartboard consisting of subjects (Bigfoot, aliens, Elvis, hookers, etc.), verbs (invades, marries, kidnaps, discovers) and objects (see "subjects"). Three darts later, you had your story.

Then one day I spotted an online ad from WWN seeking new "reporters." I wrote back that I was thrilled at the opportunity, because who else would tell me that Hillary was dating a space alien? I further mentioned that the "mainstream" media always censored my best scoops like "Man Doesn't Stop for a Red Light in 30 Years, and Never Has an Accident or Gets a Ticket." The editors asked me to send in that story as a sample, and I was off and running.

Part of the fun of "reporting" for the WWN was constructing a scenario under which such a thing, though highly unlikely, could be remotely possible. In this case, I knew the driver couldn't live in a big city where he'd be behind other cars that stopped for lights. So I placed him in a small town, so small that for years it didn't even have traffic lights. When the town put them in, Earl (the driver), who was colorblind, sued, claiming the lights discriminated against colorblind people. He lost, but folks in the town agreed that since everyone knew Earl and his distinctive red truck, if he honked at an intersection he'd be granted the right of way. Ergo, he never had to stop, and broke no law. His one near-accident occurred because the other driver was deaf, and couldn't hear him honk. Groused Earl, "They shouldn't let deaf people drive. I could've been killed." Plausible? Of course not. Would you place 1,000-1 odds that it didn't happen? I wouldn't.

Once I was "in," I often described my job, without a hint of exaggeration, as "thinking of the stupidest shit possible." I once pitched a story positing that the U.S. government had data confirming that the one commonality linking all mass killers, including the Columbine shooters, was that they never masturbated. Rather than issue this report, which would save lives but promote onanism, the government preferred to let occasional slaughters take place. My editor rejected it on the grounds that it was "too plausible."

During my stint at the News I turned down chances to write for (the much better paying) Enquirer, because I didn't want to engage in celebrity trash-talk. WWN avoided celeb gossip, with the exception of Elvis and politicians (for instance, Donald Rumsfeld: "Rumsfeld Changes His Name to Rumsfeldstiltskin and Tells Rogue Nations 'Guess My New Name or We'll Invade You,'" "Homeland Security Chief's House Robbed Five Times in a Week"). By those standards alone, I considered it a higher calling.

But psychic and "magic dot" ads don't pay top advertising rates and more and more celebrity tabloids battled WWN for valuable rack space. WWN might have repositioned itself and gone after the ironic Onion crowd. It could have made itself "cool" to read, not "weird." But odd and myopic to the last, WWN failed to adapt to a changing demographic. And so, for now -- while the Web site lives -- the supermarket checkout line will be an emptier, less imaginative place.

Stan Sinberg also writes for MAD Magazine, as well as being a long-time humor columnist and travel-writer. You can reach him at stan@stansinberg.com.