Since high school, I'd battled my curvy body into "skinny" jeans. But it wasn't until I wrestled my young daughter's round belly into stylish, slim pants that I knew the fashion madness had to stop. 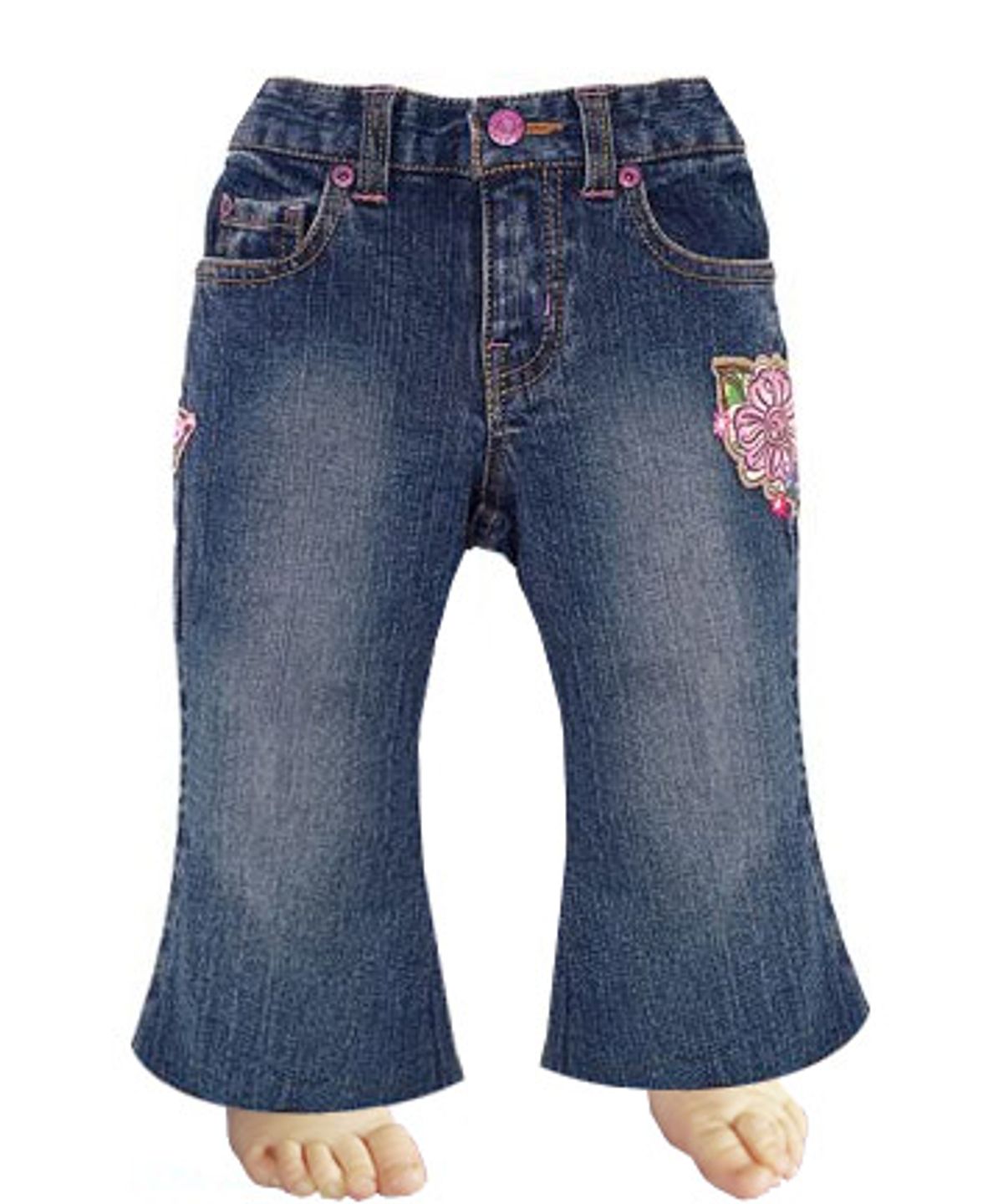 Most mothers have a certain look in mind for their children, and mine for my 1-year-old daughter, Jessie, is of a stylish tomboy. Which is why last winter, I ordered her a pair of bluejeans with front pocket flaps, embroidered designs and a slight flare at the ankle.

On the first day she was to wear them, I dressed her as I always do -- hoisting up the jeans over her dimpled thighs and edging them over her diaper. But when I went to close them, the zipper wouldn't budge. Unlike Jessie's other pants, the jeans did not expand to accommodate her melon-size belly. It was an image I'd seen before: the uncloseable zipper of jeans I wear only at my thinnest, that unbridgeable gap in the pants we dub our "skinny jeans."

I encountered my first skinny jeans in high school. Under the tutelage of my best friend, Hazel, who had the bone structure of a gazelle, I bought a pair of Levi's 505s and tapered them to fit like a second skin. They were so tight at the ankle that I could barely take them off. But they looked good, and, wearing them to parties, I started to get noticed by boys. Home at night, I'd wiggle out of them by hopping around my room on either foot until I collapsed on my bed to peel them off. Only then would I see the long, red imprints of the tapered seam running down each leg. I'd put on my pajamas and revel in the reclaimed ability to breathe. Those jeans were my first encounter with the potential pleasure, power -- and pain -- of fashion.

When I couldn't pull up Jessie's zipper, I turned her over like a present I was unwrapping to check the size on the tag: 18 months, three months older than her actual age. At her last doctor's appointment she'd come in at the 95th percentile for height but only 50th for weight. (And I admit I felt a momentary thrill about her improved prospects for a happy life should she maintain such proportions.) Yet, even with those numbers, Jessie's baby body looks like a miniature polar bear -- all rear end and stomach. I adore her shape, but mostly I love the unselfconscious way she parades it. When she's standing at the bathtub, squealing as she waits for me to wash her, I want to hold on to her naked expression of joy forever. Sometimes I put my cheek against her back and nuzzle it, just to feel her soft, plump skin.

I cuddled her older brother, William, when he was a baby too, but while William's body awes me, I sensed his difference from me from the moment I learned he'd be a boy. When he was born, I felt as if a life moved through me and into the world. When Jessie was born, I felt that a part of myself had broken off and begun to grow on its own. Her body even reminds me of mine -- the thick, powerful thighs, full bottom and soft belly. But she is a former self -- the person I was before I knew the word "fat" and how important it is to hide it.

Still, Jessie isn't overweight. Why didn't her jeans fit? I held them up and saw that the waist pulled in unforgivingly and the outer edges curved out at the hips, then tapered down to the ankle, where they flared out. They were nothing like William's pants, which hung straight down from his waist like twin tree trunks. And then I realized with a small, sick feeling that the jeans had been cut to mimic the curves of a grown woman. Without meaning to, I'd bought my daughter her first pair of skinny jeans. Whose fault it was -- society's, my own -- didn't matter. There we were: a mother, a baby girl and a pair of form-fitting jeans.

I'm not proud of what I did next. In my defense, I did what I've done all my life when faced with a pair of too-tight jeans: I altered the playing field to make them fit. I stood Jessie up on the bed, and as her stomach flattened out, I pulled the zipper up in one quick motion and snapped the pants closed before she could exhale.

An hour later, I took them off.

I couldn't stand the look of her, the waist of the jeans cutting into her belly like a corset. I whisked her into her bedroom and unsnapped the waistband, not sure which of us was more relieved.

I'll never forget the mark on Jessie's belly when I freed it. It was simultaneously strange and familiar -- a reddish, weblike band of indentations. Since high school, I'd seen variations of that pattern etched on my own stomach and thighs. But it looked raw and menacing on her baby-white skin, like sharp tracks in snow.

I threw out my skinny jeans years ago, when I realized they'd never work on the body I was born with. Jessie will someday have to figure out what kind of shape she has -- gazelle, penguin or something in between. And maybe she'll have her own skinny jeans, but I hope not for long. For now she lives without the burden of too-tight fashion. It suits her. By the time I'd fished her sweatpants out of a drawer and threw the new jeans in a box for Goodwill, the marks had already begun to disappear.

Katherine Ozment is a freelance writer living in Cambridge, Mass.