Did Chertoff lie to Congress about Guant

He told the Senate that Pentagon interrogation methods were "plain vanilla," but e-mails reveal his top staff met weekly with FBI officials who said they were torture. 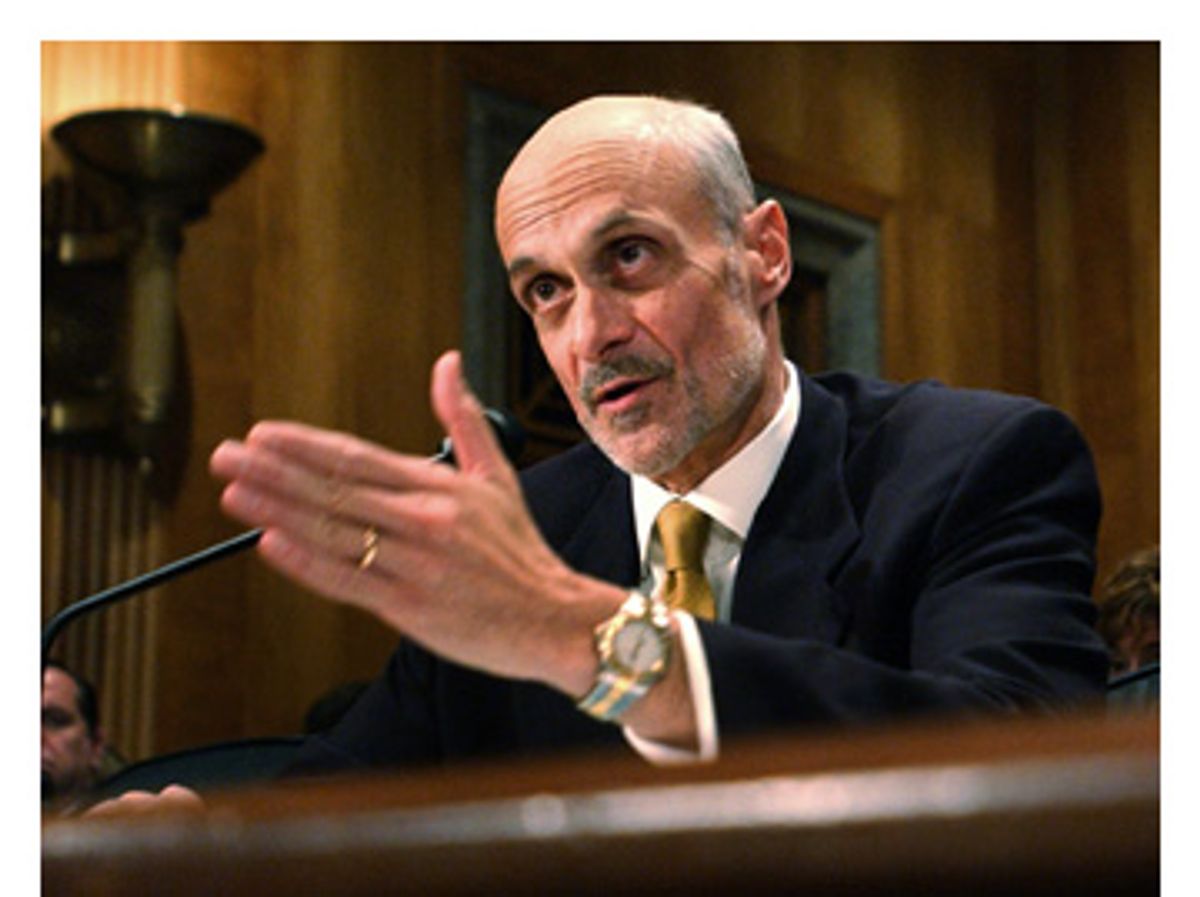 Attorney General Alberto Gonzales will leave office Sept. 17 with a reputation for being untruthful. During his repeated appearances before Congress earlier this year to explain the firing of eight U.S. attorneys, Gonzales answered "I don't recall" or some variation as many as 70 times at a sitting. When his replacement comes to Capitol Hill for confirmation, lawmakers hope they will hear nothing but the truth.

But one of the men most often mentioned as his replacement may have some of the same trouble with the truth. Since rumors of Gonzales' departure surfaced last week, speculation about his successor has centered on Michael Chertoff, the secretary of the Department of Homeland Security. Just as Gonzales, under oath before Congress, failed to recall whether there was dissension within the Bush administration over a controversial war-on-terror-related policy, so Michael Chertoff seems to have suffered a similar lapse of memory while under oath before Congress when pressed on a different terror-related policy. Gonzales pleaded ignorance of a rift within the administration over warrantless wiretapping; Chertoff has denied knowledge of interrogation techniques that are tantamount to torture, despite regular attendance by his top aides at meetings on the subject.

"If Mr. Chertoff is nominated, the Senate needs to ask him some very tough questions about what he knew about the abuses at Guantánamo," said Hina Shamsi from Human Rights First.

When Chertoff appeared before the Senate Committee on Homeland Security and Governmental Affairs on Feb. 2, 2005, the subject was not interrogations. The panel was weighing Chertoff's nomination to his current post as secretary of homeland security. He was promptly confronted on the topic, however, by Sen. Carl Levin, D-Mich. Levin's staff had dug up copies of curious FBI e-mail traffic about interrogations at the Guantánamo prison in 2002 and 2003, when Chertoff was head of the criminal division at the Department of Justice.

That was a pivotal year at the military prison. The Pentagon was institutionalizing a brutal interrogation program approved by then-Secretary of Defense Donald Rumsfeld. Interrogation teams at the prison employed forced nudity, sleep deprivation, isolation and sexual humiliation, among other tactics. During that time, for example, a detainee named Mohammed al-Kahtani was forced to stand naked in front of a female interrogator, to wear women's underwear, and to perform "dog tricks" on a leash. He was interrogated for 18 to 20 hours on 48 out of 54 consecutive days.

FBI interrogators assigned to Guantánamo had balked at the methods employed by the DOD. Given its long institutional knowledge about legal and effective interrogations, the FBI thought the military interrogations were extremely problematic. E-mail strings documenting the FBI's objections have been well publicized.

At the February 2005 hearing, Levin questioned Chertoff about an e-mail obtained by Levin's staff: a May 10, 2004, communication from one FBI official, with the name redacted, to another FBI official, T.J. Harrington. The e-mail rehashes the FBI objections to the military interrogations at Guantánamo back in 2002.

Under questioning from Levin that day in 2005, Chertoff disavowed any knowledge of abusive interrogation techniques being employed at Guantánamo and said he was unaware of those meetings. "I was not aware during my tenure at the Department of Justice that there were practices at Guantánamo, if there were practices at Guantánamo, that would be torture or anything even approaching torture," Chertoff told Levin. He told the committee he was unaware of "any use of techniques in Guantánamo that were anything other than what I would describe as kind of plain vanilla ... I do not know what the meetings being referred to are, what the techniques are being referred to, and who the people are."

Chertoff was sworn in to the Homeland Security post on Feb. 15, 2005, two weeks after the back-and-forth with Levin.

A month later, after pressuring the Justice Department, Levin obtained another version of the same FBI e-mail describing meetings about torture. It still contained redactions, but it does list the names of the DOJ criminal division officials who attended the meetings with the FBI. One of them was Alice Fisher, Chertoff's top deputy. Chertoff's counsel, David Nahmias, also attended, as did two other senior criminal division officials, Bruce Swartz and Laura Parsky. Swartz, the e-mail showed, had relayed the FBI's concerns to the Defense Department's Office of the General Counsel. (The e-mail is reproduced on page 2 of this article.)

If some of Chertoff's top staff were involved in weekly meetings in which "the DOD techniques" were discussed, it remains unclear how he could be totally unaware of any of those discussions. "The secretary always testifies truthfully," said Laura Keehner, a DHS spokeswoman.

Other close observers of these developments are not so sure. "Either he lied to Congress or he is a very out-of-the-loop manager of the division," said Caroline Fredrickson, legislative director of the ACLU. "It smacks of Alberto Gonzales saying he did not know anything about these U.S. attorney firings."

And if Chertoff is nominated, it is also unclear how much this questionable history will matter when he faces another Senate hearing. "This is unresolved," Fredrickson said, "which means Congress needs to resolve it."