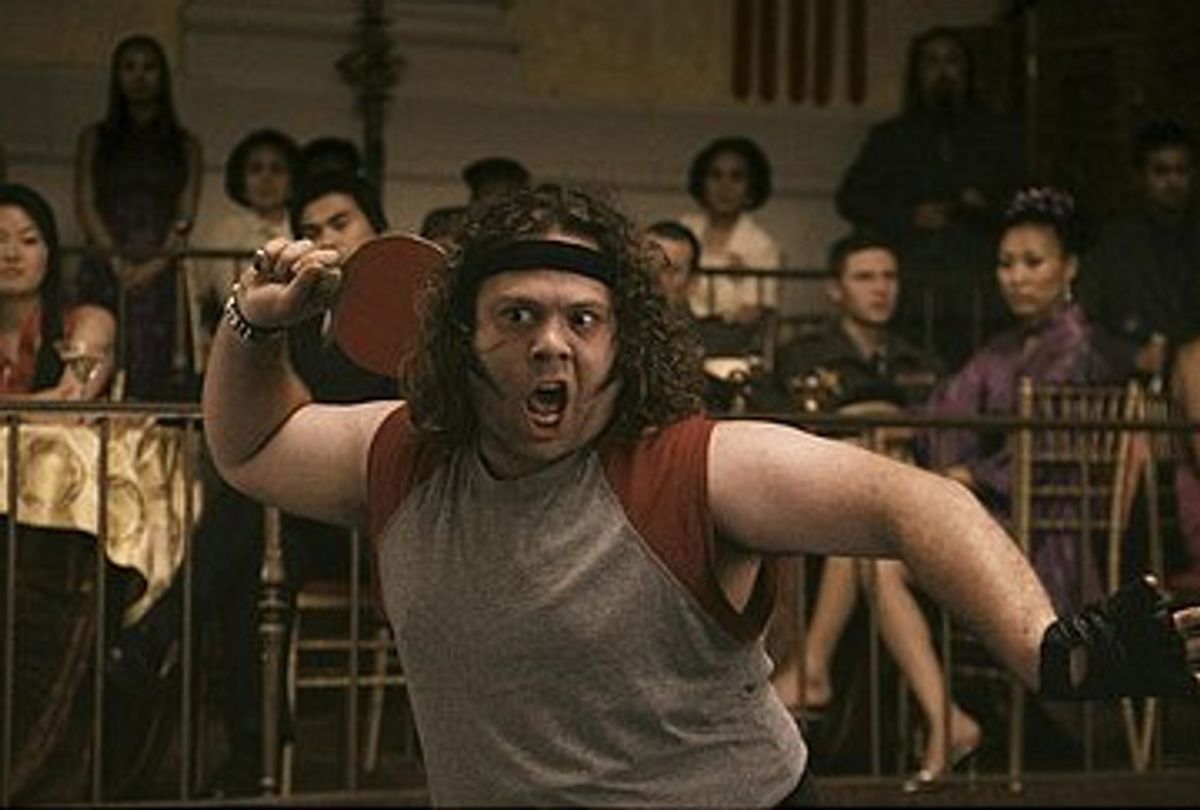 "Balls of Fury" looks as if it cost $2.38 to make. And that's one of its more endearing qualities. Writers Robert Ben Garant and Thomas Lennon (the team behind "Night at the Museum" and television's "Reno 911"), after deciding that the worlds of martial arts and competitive Ping-Pong were two great tastes that might taste great together, give us an absurd little comedy without enough flavor, period. Dan Fogler -- who won a Tony for his role in "The 25th Annual Putnam County Spelling Bee" -- plays Randy Daytona, a former Ping-Pong prodigy who left the sport behind in the late '80s after suffering a humiliating defeat at the hands of an arrogant East German opponent in too-tight shorts (played by Thomas Lennon). Now Randy is just a novelty act -- he wraps his girth in a sequined tuxedo jacket and performs assorted paddle tricks for clueless seniors at a third-rate gambling resort.

Then FBI agent Ernie Rodriguez (George Lopez) shows up and asks Randy to help catch a treacherous fiend named Feng, a Ping-Pong kingpin who hosts a deadly underground tournament. (Feng turns out to be Christopher Walken in a lacquered pompadour and an assortment of jewel-toned, high-collared Infant of Prague costumes.) Randy, reluctant at first, ends up giving in for personal reasons, which means he needs to get into shape, fast. He heads to Chinatown to train with blind Ping-Pong master Wong (James Hong), and along the way he falls in love with Wong's niece Maggie (Maggie Q), a killer Ping-Pong player herself.

You might laugh, at least a little, at the heavy-duty kitsch decor of Feng's Fu Manchu-style lair (which happens to be located somewhere in South America). All gold and cheap lacquer, with the occasional rice-paper wall, it jumbles Japanese and Chinese influences with cheapie, reckless abandon. (When a big shoot'em-up ensues at the palace, Feng urges the gunmen not to damage his priceless "reproductions.") There are sex slaves in "Balls of Fury" (although they may not be exactly the sort you're expecting), as well as lots of furious Ping-Pong and a few brief, uncomplicated but reasonably satisfying martial-arts sequences. Maggie Q, the Vietnamese-American actress who appeared earlier this year in "Live Free or Die Hard," makes those sequences fun to watch: She's lithe and muscular, and approaches the whole enterprise as nothing more than a lark.

But "Balls of Fury" is all setup and no payoff. Garant and Lennon have no trouble spinning out crazy ideas; they just don't know what to do with them once they've got 'em. Fogler's slobby charm is probably supposed to grow on us -- he spends much of the movie in old Def Leppard T-shirts, his puffy hair semi-controlled by an assortment of sweatbands -- but slightly better grooming wouldn't have made his character any less funny (to the extent that it's funny at all). Walken is amusing to look at, at first, but you can almost see him counting the minutes until he can cash the paycheck. The movie does pull off an occasional great goofball line ("It is better to die like a tiger than live like a pussy"), but its rhythms are too slack, and the gaps between the funny bits become longer and longer. "Balls of Fury" is intended as nothing more than a here-today, gone-tomorrow zany entertainment, and at the very least, it has a good-natured, slightly raunchy spirit about it. But ultimately, it's a hollow enterprise, all ping and no pong. It doesn't bounce; it splats.