Why Blockbuster is gaining on Netflix 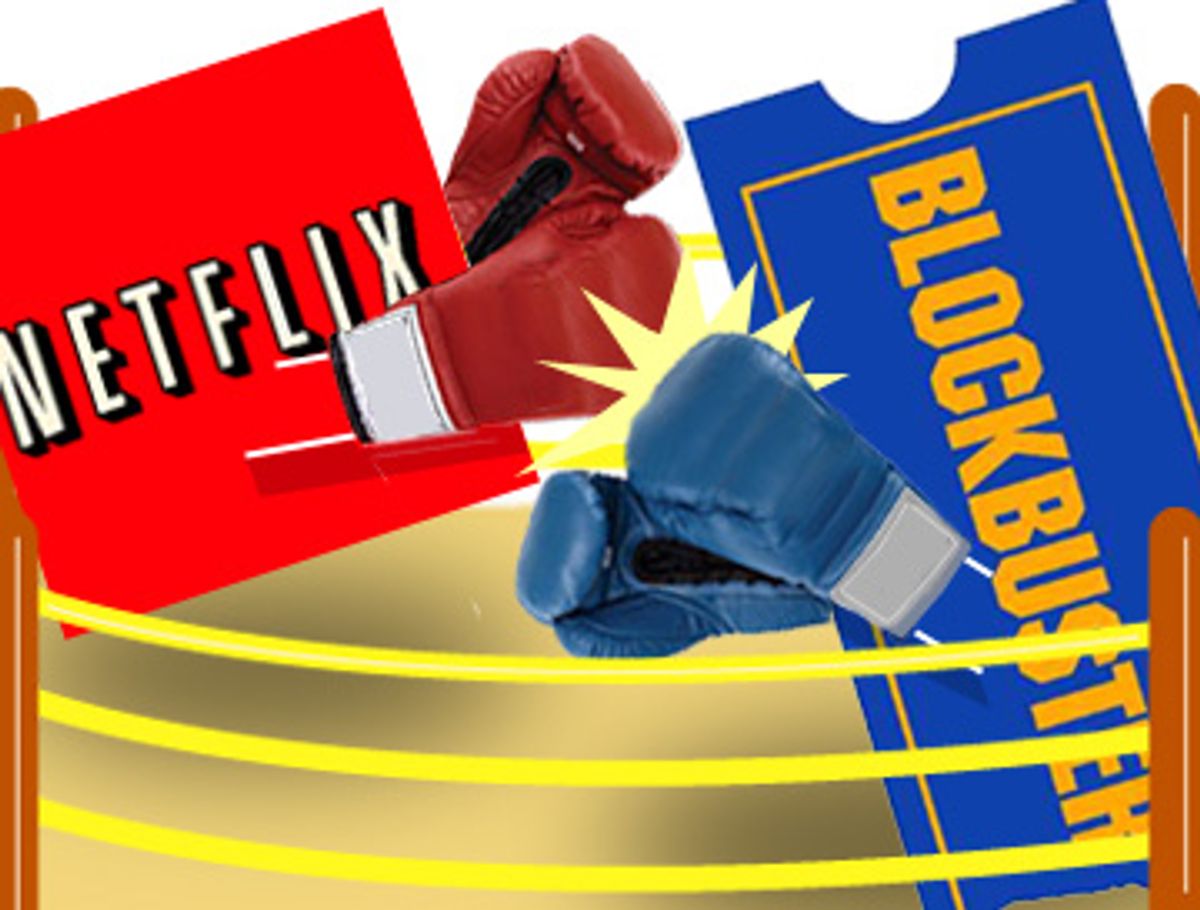 Netflix, like TiVo, Apple and Harley Davidson, is that rare big company still capable of eliciting uncynical, drooling affection in legions of otherwise well-functioning adults. Though there are whiners -- people who occasionally complain about its policy of "throttling" the speed at which DVDs are sent to high-use customers -- Netflix is rivaled only by Starbucks as a legal, cheap way to regularly juice the brain's dopamine receptors. Even if you've been subscribing for years, a jolt of joy shoots down the spine at the sight of a red envelope or two waiting for you in the mail. It's always something of a pleasant surprise, isn't it, that such a thing works at all, let alone that it so rarely disappoints?

But having copped to my Netflix fix, I'll now admit a transgression. For several weeks, I've been trying the DVD-by-mail service administered by Netflix's competitor Blockbuster, and I've found it pretty much on par with the red-envelope pioneer -- and, in some ways, it's much better.

In the last couple of years, Blockbuster has invested hundreds of millions into developing and marketing its Web service, and for the first time, it is threatening Netflix's dominance. Though Netflix claims 6.7 million subscribers, in late July it reported that it lost 55,000 users during its second financial quarter, Netflix's first ever decline in total subscribers. During the same period Blockbuster added 525,000 people, bringing its subscriber base to 3.6 million. Some people, clearly, are ditching Netflix for Blockbuster. I signed up to Blockbuster to see why that may be. After using it, I found just one thing keeping me from switching permanently: Netflix, unwisely, has decided to lock me in, keeping me tied to its service at pain of losing the hundreds of ratings I've added to its service. But more on that in a second.

In general, Blockbuster's service works exactly like Netflix's. On the Web site, you choose a list of movies you'd like to see; the company sends you the DVDs in that order, according to availability. Like Netflix, Blockbuster imposes no due dates and late fees. Depending on your service plan, you keep one or two or three DVDs at home, and get a new one each time you mail back an old one.

Blockbuster's three-at-a-time plan is $17 a month. In an effort to stem Blockbuster's rise, Netflix just reduced its three-at-a-time price from $17 to $16 (and, for some people, $15). But for a dollar more, Blockbuster has one great advantage over Netflix -- instead of dropping your disc in the mail, you can take it to a Blockbuster store and get a new movie immediately in return. This, it turns out, is an enormous convenience -- great enough that it should prompt even die-hard Netflixers to look anew at Blockbuster.

Are you, like me, one of those fickle folks whose preference for movies varies with the tides? Throughout the week, you're delighted at the prospect of turning Saturday into a double-feature of "L'Avventura" and "A Passage to India," but come the weekend you find your mood affords nothing more epic than Harold and Kumar's trip to White Castle?

Why our preferences shift so swiftly is ripe for psychological research, but for now it suffices to point out that such mood disorders make for a big problem for Netflix, which demands that you choose two days ago what you're going to watch today. Blockbuster's plan is a boon to instant gratification; a typical Blockbuster store has nowhere near the selection of an online DVD service, but at least you have the option, now, of trading in one of your highbrow movies for "Dude, Where's My Car?"

There are other benefits to this setup. When you return your movie to a Blockbuster store, the company credits your online account immediately and quickly ships out the next available DVD in your queue (at least in my experience; Blockbuster, like Netflix, doesn't guarantee shipping dates, and adjusts mailings based on your usage pattern). If you drop a Netflix movie in the mail on Friday night, your mail carrier will only pick it up Saturday, and your next title will ship out Monday, to arrive at your house Tuesday. Blockbuster beats that by a day: Take your movie to a store Friday night, and in addition to getting a new one immediately from what's available there, the next title in your queue will ship out Saturday, for delivery at your house Monday. Even though you're paying for three movies at a time, Blockbuster, then, can often load you up with more -- the three you get in the mail, and any others you get in the store. (In the $17 plan, Blockbuster lets you make five in-store exchanges every month; until recently, it allowed unlimited exchanges.)

There are some small caveats: Anyone who switches from Netflix to Blockbuster will notice a service that's still a little rough around the edges. Blockbuster's Web site works well enough (and many of its features, from the star-rating widget to the little blurbs that pop up when you roll your cursor over a movie, are copied straight from Netflix), but it looks and feels a bit clunky compared to Netflix's superb site. Netflix describes each movie in its catalog in a succinct, 100-word paragraph; Blockbuster's descriptions, which are from the All Movie Guide, run several times as long, so long that they're often too big to fit on a DVD envelope and are inelegantly truncated instead. Netflix's site gives you reviews of each movie from critics as well as regular people; Blockbuster doesn't tell you what the critics thought. Netflix allows you to set up several queues on a single account -- you can keep one queue just for the kids -- but at Blockbuster you can only have one queue.

Netflix claims to offer 85,000 titles while Blockbuster claims 75,000; I couldn't find a single DVD that was not in both catalogs. I did experience one delay with Blockbuster that I did not with Netflix, though -- the first disc of the first season of "The Sopranos" was available immediately at Netflix, but Blockbuster shipped it out after a short delay. I asked Mike Kaltschnee, who runs the blog Hacking Netflix and who is a high-volume user of both services, which one had the movie he wanted more often. Availability varies, he says, by when and what kind of movies you're renting; in general, he's found Netflix to have slightly better availability. (One time, though, he had to wait three months for Netflix to send him "Lost in Translation.")

There are other reasons to stick with Netflix. Its customer service is legendary; the company quickly addresses complaints -- by phone! -- whereas Blockbuster, while trying harder, can still leave something to be desired. Netflix is also moving quickly to boost its own instant-gratification plan -- it offers subscribers a program to stream full-length movies over the Internet. Though the service isn't perfect -- you can only watch the movies on your computer, not your TV, and only a computer running Windows and Internet Explorer; just 4,000 movies are available to stream; and on slow connections, image quality is lacking -- I found it a nice addition, especially since each movie is free. If you're ever lonely and uninterested in your three DVDs, you'll surely find something to watch online.

But the main reason I'm sticking with Netflix is much more simple: I can't leave. Over the years at Netflix, I've built up a queue of 360 movies, and I've rated nearly 700. These ratings are important to me; they represent a history of my movie watching, and I've spent many cumulative hours compiling them. I've long thought of these ratings as my own data -- data that I have the rights over -- but according to Netflix, I'm not allowed to take them with me when I leave. The only way to transfer my queue and my ratings from Netflix to Blockbuster -- and from Blockbuster to Netflix -- is by hand: I've got to manually redo everything, representatives of both services told me.

Though it wouldn't be hard for a determined programmer to create one, Hacking Netflix's Kaltschnee says he knows of no good hacks to transfer movie information between the two services.

And Steve Swasey, a spokesman for Netflix, told me that the company would oppose any such effort. The data that people put into Netflix is "proprietary" information, he says; though each customer controls his individual ratings, every rating is used to fuel Netflix's recommendations engine, and that engine is a competitive advantage for Netflix. Trying to pull out your ratings after you've enjoyed the recommendations "is like asking for your money back from Disneyland after you've enjoyed the rides," Swasey told me. (Blockbuster also does not offer a way to export your queue and ratings to other services.)

Netflix's position is understandable; like any company on top, it guesses it has nothing to gain by making it easier for customers to walk away. But in the war between Netflix and Blockbuster, I hazard that data portability would benefit any service that adds it first. Netflix's users are fiercely loyal; if Netflix makes it easier for them to leave, many would see the move as a sign of the company's faith in its own product and would, paradoxically, see more reason to stay.

Not long ago, the tech blogger Dave Winer ran into Kevin McEntee, the head of engineering of Netflix, at a tech conference. According to Winer, he and McEntee discussed the possibility of letting Neflix users take their data to other services. "It may not be obvious, but Netflix is a social network, and the more the networks open and let the user's data be portable, the more power it gives developers to do interesting things with the data," Winer wrote. "Netflix has always had a great attitude about customers. It would make sense for them to be the first to trust us with our own data."

Correction: I originally wrote that Hacking Netflix's Mike Kaltschnee waited three months for a movie from Blockbuster; actually, it was Netflix that made him wait.