Many are still struggling on the Gulf Coast. But casino and real estate investors are living large -- thanks to Republican officials. 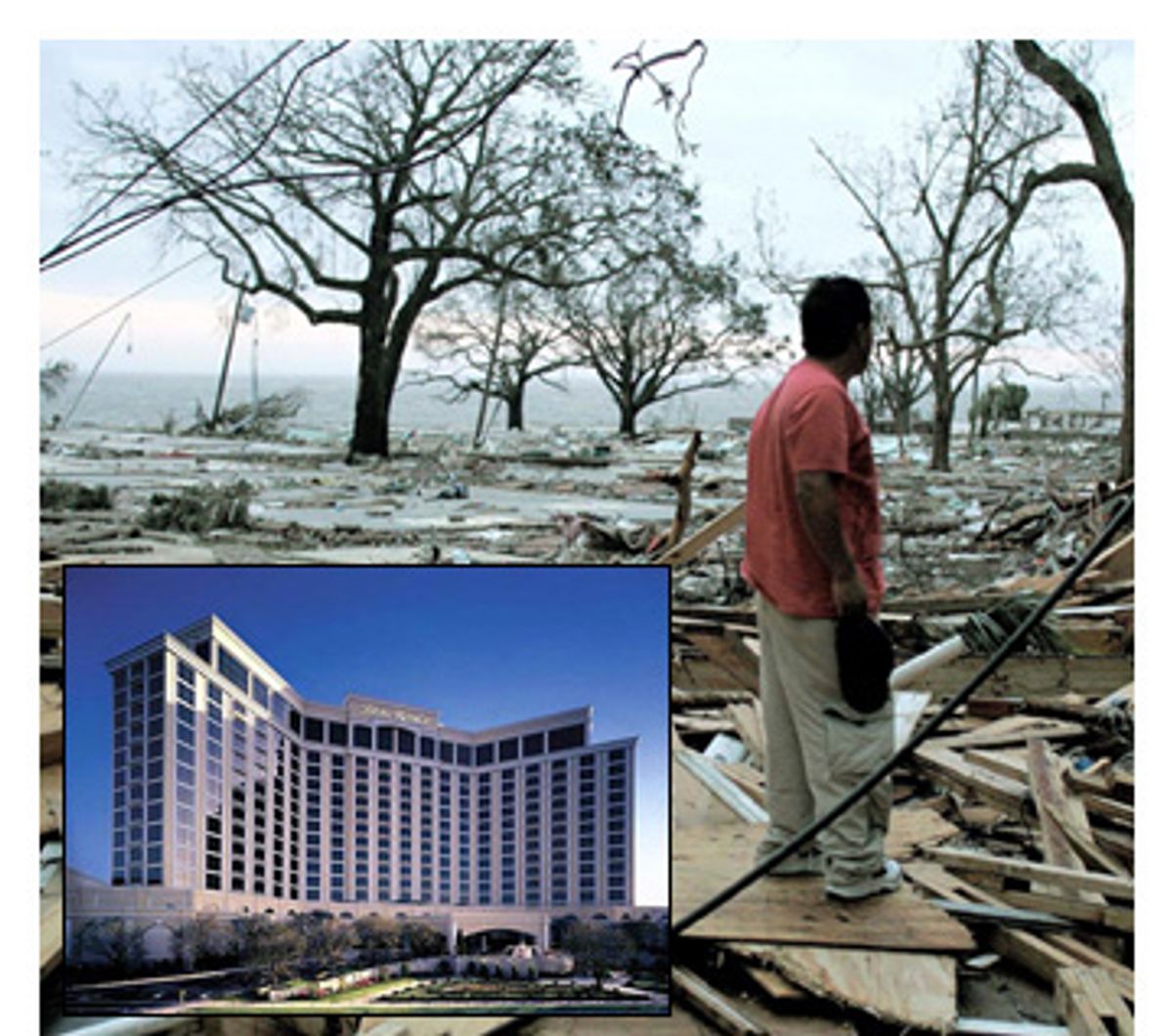 As residents of Mississippi's Gulf Coast gather today to commemorate the second anniversary of Hurricane Katrina, they will recall a cataclysmic storm that spared no one, rich or poor, from its destruction. Virtually every structure along the 90-mile stretch of coastline was either wrecked or swept away after Katrina's 140-mile-an-hour winds and 40-foot storm surge came ashore like a steamroller from hell. Yet, while the national media has focused its attention on New Orleans, it has given relatively little coverage to the hurricane's impact elsewhere, even though the destruction to coastal Mississippi, which bore the full brunt of the storm, was as bad as, and in some places worse than, the calamity that struck New Orleans when the levees there broke.

Two years later, some of these areas are still distressed. One reason for the lack of attention paid to the Gulf Coast may be the massive investments made in the region by casino, hotel and real estate interests. That has created the appearance of a recovery that business promoters say has brought, and will continue to bring, enormous growth to the area. But many locals say that the casino-led development has done little to alleviate post-disaster conditions for most residents, including the 37 percent of the population -- approximately a half million people -- who earn below what federal guidelines deem low to moderate income. Moreover, maneuvering in Washington by the state's Republican leaders has diverted aid money away from some of the people who need it the most.

Hurricane Katrina "leveled everybody" on the Gulf Coast, says Reilly Morse, a civil rights lawyer from Biloxi who works for the Mississippi Center for Justice, a statewide organization that provides legal assistance to low-income residents. "For a very short while, everybody had the same experience, and that spawned a sense of community that I don't think ever existed before." But since the aid money began flowing, said Morse, "there's really been two recoveries here: one that generally favored homeowners with resources, and another one that basically priced the poor out of the housing market."

Katrina's impact is still visible from U.S. Highway 90, which hugs the coast from New Orleans to the Florida panhandle. The two Mississippi bridges destroyed in the storm have been rebuilt. But a visitor driving east from Gulfport to Pascagoula encounters mile after mile of empty lots where homes, motels and retail outlets used to be. The slow pace of reconstruction is evident from the many housing trailers provided by the Federal Emergency Management Agency still peeking through the trees.

"We've still got a mighty tall mountain in front of us," Haley Barbour, the state's Republican governor, admitted this week after releasing an otherwise upbeat report on Mississippi's recovery. The official story is that Mississippi is back, thanks to nearly $24 billion in federal aid negotiated by Barbour, a former Washington lobbyist. The federal funds, he claims, have benefited all citizens in the stricken area and allowed most people who lost their homes to rebuild. As a result, only about 17,000 people remain in FEMA trailers today, down from about 36,000 less than one year ago. That is little consolation, however, to those who must still endure the cramped quarters and toxic fumes that permeate the trailers.

The $23.5 billion in federal funding that Mississippi's governor and its two Republican senators managed to obtain was unprecedented in scope for a state recovering from a natural disaster. But the distribution of the $4 billion the state obtained specifically to help residents rebuild their housing, thanks to Barbour, has been badly skewed toward wealthy homeowners.

Under the Department of Housing and Urban Development's Community Development Block Grant program, 70 percent of the funds are supposed to be allocated to low- and moderate-income people. But the governor successfully lobbied to waive that requirement, undercutting its impact on Katrina survivors. As a result, only 25 percent of the money has reached the poorer segments of the population. Renters, who make up 40 percent of the population in some sections of the coast, have received nothing. "Only a minuscule fraction has actually gotten into the hands of those that need it most," said Morse.

Meanwhile, Mississippi officials are touting the spectacular return of the casino industry to the Gulf. In November 2005, Barbour called the state Legislature into a special session to pass a law allowing casinos, once restricted to barges, to be built on land within 800 feet of the coast. The new law -- which the gaming industry had been seeking for years -- sparked a flood of investment from casinos, hotels and condominium developers. Since Katrina, nine casinos have opened for business on the coast. Eight of them are in Biloxi, whose mayor, A.J. Holloway, has relentlessly promoted the industry.

State officials predict casinos will bring in a record $3 billion in revenue to the state this year, 10 times what it was in 2006, when they earned a little over $300 million. "I hate to think where we would be today in this post-Katrina world were it not for the revenue and jobs created by this industry," Holloway declared last week.

The first casino to open after the storm was the spectacularly garish Beau Rivage Resort and Casino, a subsidiary of MGM Mirage. Badly damaged during Katrina, it was quickly rebuilt in time for Labor Day 2006, at a cost of $1.3 billion. The latest project to get off the ground is "Margaritaville," a $700 million joint venture between soft-rocker Jimmy Buffett, who was raised in nearby Pascagoula, and Harrah's Entertainment. When it opens in 2010, it will include a 420-room hotel, a spa and a convention center, all spread along Biloxi's publicly owned beach.

But to many locals, the casinos -- and the hotels, shopping malls and condominiums that accompany them -- are hardly the answer to the region's devastation and economic crunch. They believe that the Biloxi model for development has made it difficult for many local residents to remain in the area, and they chafe at the idea that the post-Katrina emergency is over.

"We're still a long way to recovery, maybe 30 percent [there]," says Bill Stallworth, the only African-American on Biloxi's City Council and the driving force behind the East Biloxi Coordination and Relief Center, a local advocacy organization founded after the disaster struck. Instead of casinos and high-rise condominiums, local organizations are advocating for low-income housing and daycare centers that would make life easier for casino workers and local residents. "There's a shortage of affordable housing, but we see boutiques, stores, rich houses and casinos being built," says Sharon Henshaw, a Biloxi native who launched another group, Coastal Women for Change, after Katrina. "We want the people to understand that we are nowhere near recovery."

During the 19th century, Biloxi was a resort town for wealthy white families from New Orleans and other Southern cities, and the center of a booming seafood and canning industry that rivaled Baltimore's in size and influence. Those industries, built initially on slave labor, also brought in thousands of Eastern Europeans and created unusual inroads for the Catholic Church in a largely Protestant state. But the city was strictly segregated until 1963, when Gilbert Mason, a prominent doctor and a longtime member of the state NAACP, organized a series of "wade-ins" to integrate the city's public beaches.

African-Americans soon became an important political and economic force in the city. Biloxi's population was further transformed in the late 1970s, when the seafood and shrimping industry recruited thousands of Vietnamese who had left their homeland in the wake of the Indochina War. During the 1990s, Biloxi's economic base expanded with the construction of several casinos, which the state Legislature had legalized with the stipulation that they confine their gambling to vessels and barges.

But Katrina's wrath wrecked everything within a mile of the coastline and laid waste to much of the city. The surge sent tons of water into the bay north of the peninsula, flooding the inland township of Turkey Creek, a historic community founded by former slaves in the 1860s. Television pictures captured much of the devastation, including the casinos yanked off their moorings and thrown crazily across nearby highways. Altogether, 238 people lost their lives in the area, and more than 3,000 homes and commercial structures in Biloxi were wiped out.

Because of its proximity to the water, the area around East Biloxi, the district represented by Stallworth, has become ground zero for the casino and real estate boom. Almost immediately after the storm, developers literally began walking around offering large sums of money to people willing to sell their property; some, despairing of putting together the resources to rebuild, took the money and left.

The developers "want to make the place so inundated with casinos that Biloxi becomes a little Las Vegas," says Jackie Washington, an East Biloxi resident who lost her home in the storm. "All the way around the water, they're trying to box us in." Like her, many of East Biloxi's other residents have chosen to stay and have banded together with local environmental activists, clergy and Vietnamese citizens' groups to seek a more balanced approach to recovery. They have found a champion in Stallworth.

To keep the casinos at bay, Stallworth and the activists at the East Biloxi Coordination and Relief Center came up with an interesting strategy: They began helping people buy scattered plots of land near their homesteads and organized volunteers to repair and rebuild houses. Once locals created a "checkerboard" of their properties, Stallworth says, condo developers could no longer come in and buy everything out. The strategy appears to be working; the pressure from the casino interests "is starting to abate," Stallworth says. So far, he says, volunteers working through the relief center have repaired 500 homes and built around 18 new structures.

Local activists say they have been forced to take matters into their own hands because the state has made it so difficult for low-income people to tap into government funds. Many of the initial aid beneficiaries were people who owned palatial homes on the waterfront. Yet even today, thousands of low-income applicants are still waiting for help. Washington is one of them. She applied for assistance in May 2006, and received her first response from the state two weeks ago. But the notice didn't say how much she might receive or give a date when she might expect a check. "The red tape to get it -- that's what really and truly hurts," she said.

Meanwhile, residents of other cities on the coast have watched Biloxi's influx of casinos with a mixture of fear and envy. Most of Biloxi's neighbors, including the city of Gulfport, Mississippi's second largest, adopted "smart growth" plans after the storm, designed to balance business development with the housing needs of residents. (Biloxi, under the leadership of the pro-gambling Mayor Holloway, did not.) They are concerned not only about the economic impact of casinos but also about the potential environmental effects of development.

In the town of Bay St. Louis, west of Biloxi, a group of residents have gone to the state's supreme court in a bid to overturn a decision by the Hancock County Council, made before the storm, to rezone 1,100 acres of coastal wetland to permit large-scale condominium development, without any height or density restrictions.

Coastal Community Watch, the local environmental group behind the lawsuit, has voiced concern that further destruction of wetlands on the coast can only increase the state's vulnerability to storms like Katrina. More recently, a commission of citizens recommended a ban on any new construction of casinos in Bay St. Louis, which has one gaming establishment. In the wake of Katrina, "everybody realizes we have to change," said Bob Davis, a member of that commission. "But a lot of us don't want Bay St. Louis to become a little Biloxi."