Hey, Americans can too find the U.S. on a map!

Miss Teen South Carolina flubbed her answer. But it was the question that did real damage. 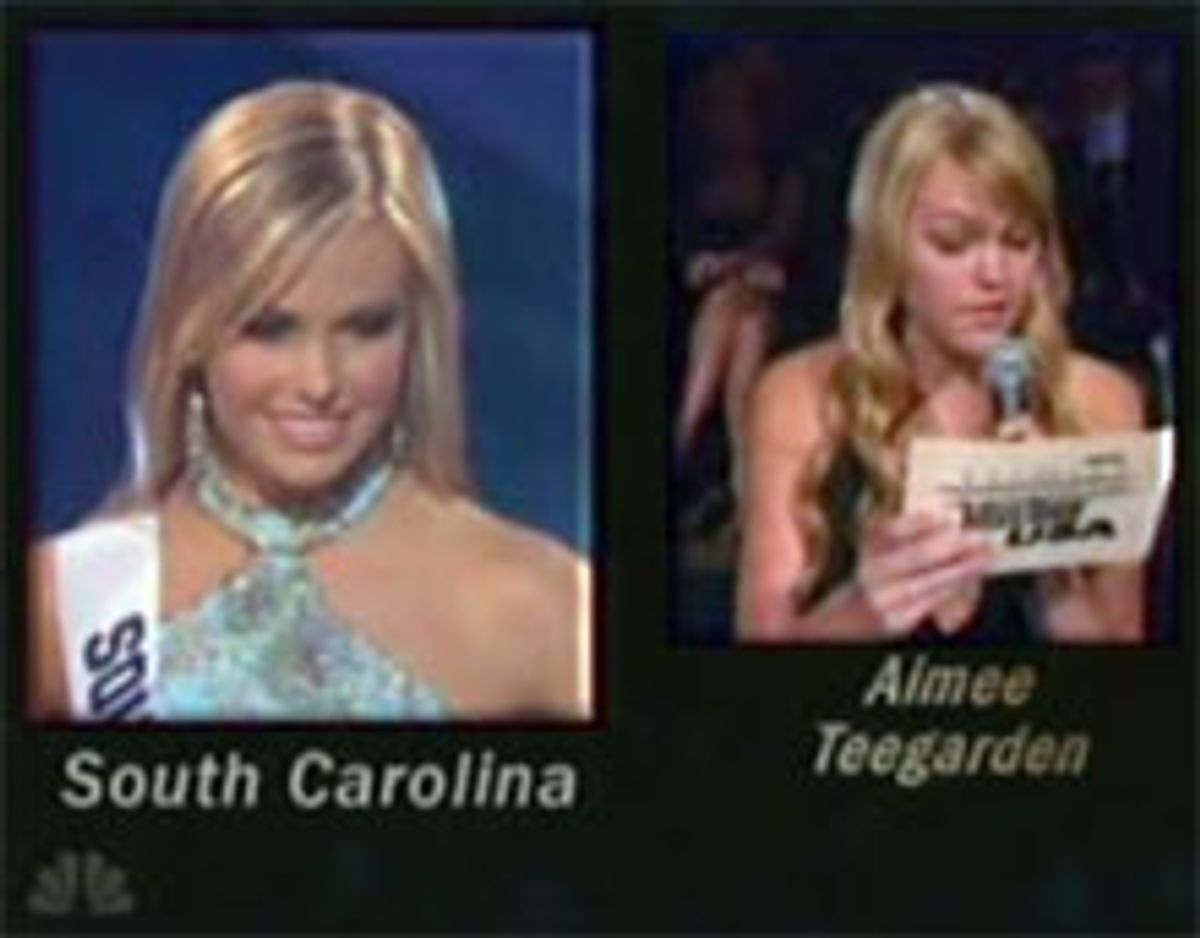 This is a tech column, but in the course of scouring the Web in search of fresh tech meat, I often come upon questionable little factoids or scraps of urban legend that merit reconsideration. Let's look at one recent doozy:

Can Americans find the U.S. on a map?

Like other members of the tech-savvy youth, you've surely become enraptured by the struggles of 18-year-old Lauren Caitlin Upton, Miss Teen South Carolina, who leaped into YouTube infamy this weekend by royally flubbing her theory as to why Americans are bad at geography. My colleague Rebecca Traister has already masterfully wended through the cultural implications of the case; Traister refers to a couple of Salon staffers who say Upton's getting a bum rap, and I confess I'm one of them.

Upton is hard to like, much less defend -- look at her Facebook page! But I feel bad for her. Clearly she's as sharp as a marble, but I buy her excuses -- she was nervous, she couldn't hear the question. And there's something else that bothers me about the Upton kerfuffle: The question was wrong.

Upton was asked, "Recent polls have shown that a fifth of Americans can't locate the U.S. on a world map. Why do you think this is?"

But no survey I can find supports this number, and, indeed, the most respected studies looking into what Americans know about the world paint a far rosier picture.

In 2006, the National Geographic Society interviewed 510 young Americans -- people aged 18 to 24 -- about geography. Interviewers handed people a blank map of the world and asked them to identify various countries. "Nearly all (94 percent) young Americans can find the United States on the world map, and Canada (92 percent) and Mexico (88 percent) are nearly as familiar," the survey found. (Read the full PDF here.) "Wide majorities can find bordering bodies of water including the Pacific Ocean (79 percent) and the Gulf of Mexico (75 percent)."

So most Americans, it turns out, can find America on the map. They can find Canada and Mexico and even the Gulf of Mexico. You have to ask what's done more damage to the nation's image: Upton's bad answer, or the pageant's flawed question, which has erroneously convinced millions across the globe that Americans don't know their own country?

Granted, there are lots of things Americans don't know about the world. In the National Geographic survey, most respondents couldn't find the United Kingdom, Egypt, and Indonesia on a world map, and more than 60 percent couldn't find Iraq on a map of the Middle East. But I wonder, are these numbers so bad?

Remember, people in the survey were trying to place countries on unlabeled maps. That is, they were the sort of maps nobody ever uses, maps that, indeed, run contrary to the very aim of cartography. A map is a reference object; we make maps precisely so that we don't have to memorize where things are, so that we can, instead, look up where things are.

We are, moreover, living in a golden age of maps. A decade or more ago, it might have been important and necessary for Americans to know, in their heads, that Indonesia is an archipelago in Southeast Asia just to the north of Australia and southwest of Singapore -- that information, then, would have been relatively tough to figure out. Today you can find that much by typing nine letters -- Indonesia -- into a computer, then clicking one button. You can, if you want, even download a searchable representation of the entire globe and navigate the streets of Jakarta from your home. These possibilities go far in explaining why, as the National Geographic survey shows, young people who use the Internet are better at geography than those who don't.

Any real discussion of geographical illiteracy would have touched on this revolution in maps. Maybe it's not so bad if people don't know where things are, Upton could have answered, because people can easily find where things are, and there's less appreciable difference, in our era of instant knowledge, between knowing things and knowing how to find things.

Upton, I'm sure, was not thinking about any of this, and neither, of course, was the pageant expecting so sophisticated an answer. That's because nobody really cares what our Miss Teens think about the origins of geographical illiteracy, a subject that would stump even experts. The only answer that Upton was expected to give -- the only answer that would not have landed her on YouTube -- is one you might call B.S., the sort of answer you give in school when you haven't done the reading.

Instead of talking about "U.S. Americans," Upton should have pointed out that the children are our future and that we ought to teach them well and let them lead the way; she could have inveighed against leaving any child behind; she might have noted that it takes a village.

She was asked a dumb question, and the world's beating her up for the sin of not being able to arrive quickly enough at the sort of meaningless sound bite that we expect from our politicians.