This is a Hong Kong action movie that even people who think they don't like Hong Kong movies should see. 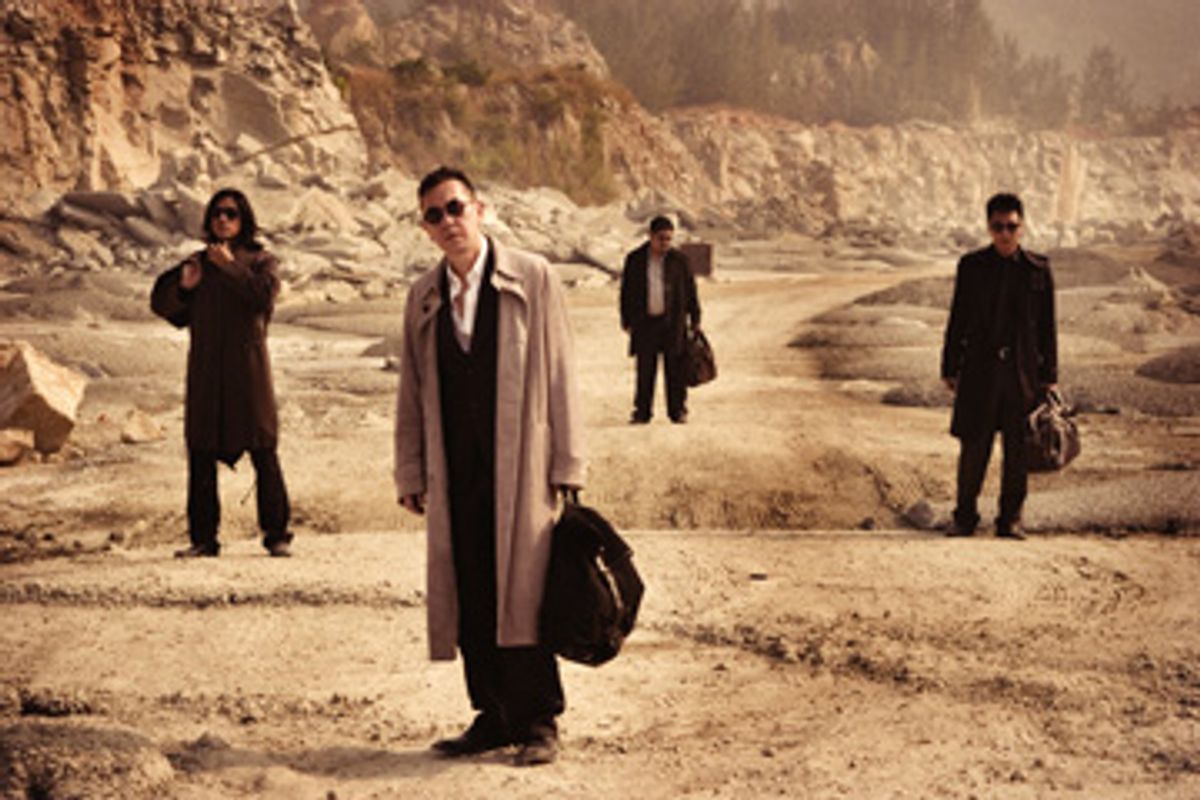 People who know and love Hong Kong films already know and love Johnnie To. His crime-thriller duo "Election" (2005) and "Triad Election" (2006) are firm favorites among the Hong Kong film crowd, although those two pictures barely scratch the surface of his career: To has made more than 40 movies over the past 25 years, which means there's plenty for enthusiasts to mine.

To doesn't need any special pleading among people who follow Hong Kong cinema. Yet I still meet people who praise "The Departed" (an entertaining and beautifully made picture) but who draw a blank when I mention Andrew Lau and Alan Mak's "Infernal Affairs," the extraordinary cop drama on which "The Departed" is based. I don't blame their reaction on ignorance: I just think that a lot of movie fans who might enjoy the work of some of the Hong Kong filmmakers are intimidated by the clubby insiderishness of so many of the fans. It's hard to know what you might like when you don't even know where to start.

That's why I'd put To's "Exiled" -- which opens in New York today, in Los Angeles next week, and in other U.S. cities over the next few months -- into the category of Hong Kong movies that even people who think they don't care about Hong Kong movies should see. "Exiled" is an action picture -- a fairly violent one -- and as you might guess from the title, it's a movie about dislocation, about being forced out of the world you know, unable to re-enter. But it's also about finding a sense of community within that dislocation; there can be solace, if not outright joy, in being a band apart.

At the beginning of "Exiled," two hit men, Blaze and Fat (Anthony Wong and Lam Suet, respectively), show up at the home of Wo (Nick Cheung), an associate and old friend, to kill him. Two other men, Tai and Cat (Francis Ng and Roy Cheung), show up at the same time to try to protect him. These five guys have known each other for years: At one point we see an old snapshot of them all together, a bunch of gangly kids who haven't yet outgrown their teenage awkwardness. Wo, who has been in hiding after botching the murder of the group's own boss, Boss Fay (Simon Yam), is now trying to set up a home for his wife, Jin (Josie Ho), and infant son. Blaze knows he's going to have to kill Wo eventually, and the reality of that pains him. But for now, he doesn't even hesitate to approve a decision made by the group: They'll help Wo pull off one last job, so his family will be provided for after his death.

That's only the barest description of the setup, and it doesn't even begin to capture how funny "Exiled" is, admittedly in a dry, existentialist vein. With the mission to kill Wo temporarily put on hold, the gang hustle together to assemble furniture for the empty apartment the couple have just moved into, their meaty, killers' fists turning to the more delicate tasks of fitting legs onto tables and patting armchair cushions into place. They cook up pots of food and have a few drinks. Then they set up a camera on a self-timer and crowd together for a group portrait -- except someone stumbles and sends the whole bunch into a laughing, sprawling mess just as the shutter clicks, a moment that represents both the mess of their friendship and the solidity of it.

The violence in "Exiled" is stylized -- even more so than in, say, Sam Peckinpah's "The Wild Bunch" (which To references, directly and indirectly) or in classic Hong Kong action pictures like those made by John Woo. In "Exiled," when bullets hit flesh, they instigate not spurts of blood but sprays of reddish powder, almost like smoke. The effect is probably meant to represent arterial spray, but the effect is poetic, almost ethereal, in the way it suggests the spirit being ejected from the body. It's the kind of stylization that allows us to look at movie violence without flinching, but which also makes that violence more intimate, less remote. The gunplay often -- though not always -- takes place in close quarters (an empty flat), or in settings that feel incredibly fragile or vulnerable (a glamorous restaurant covered by a dome of glass panels). At one point, a door caught in a crossfire hangs in midair, first turning one way, then the other. We're not talking about violence that takes place in mean cities with wide-open streets; in "Exiled," To keeps everything closer to home.

Lots of people are drawn to Hong Kong action movies for the action, and Lord knows that's a big enough draw. But over the years I've gotten far more pleasure from the actors in Hong Kong films than I have from even the most gorgeously staged gunfights. Many actors from Asian cinema -- people like Chow Yun Fat, Maggie Cheung (who starred in To's 1993 "Heroic Trio") and Gong Li -- do cross over to work in Hollywood and Europe, although Hollywood, in particular, seems at a loss as to what kinds of roles to give them. (I give you Exhibit A, the dum-dum "Memoirs of a Geisha." And although he at least gets roles, Hollywood has never known what to do with Chow Yun Fat.)

Better to catch these wonderful actors in movies made by directors who know how to use them. Anthony Wong, a huge star in Asia, gave a wonderful supporting performance in last year's "The Painted Veil." In "Exiled," he plays Blaze not just as the archetypal crook with a conscience; the weight of his responsibilities manifest themselves in his every step, and in his eyes -- which may be why they're covered with hipster dark shades for much of the movie. Wong makes us see both the tenacity and the tenderness in this "bad guy": Blaze's face often shows a weird mix of hangdog resignation and wary watchfulness. He knows he can't change fate, but that doesn't stop him from keeping an eye out for ways to try.

Josie Ho, as Wo's wife, Jin, has a smaller role, but both the performance and the conception of the character are astonishing. Ho gives a wordless performance here: When the hit men come to the family's home, Wo pours Jin a glass of whiskey. She downs it, grabs the bottle from him, and drinks three or four more shots in succession, her eyes blazing with anger and frustration, knowing that she can't stop what she believes is about to happen. In a later scene, she takes the performance even further, in an expression of grief and fury that comes straight from Greek tragedy via silent film.

"Exiled" is peppered with the usual male posturing: We get lots of shots of the guys standing around in their leather jackets or raincoats, cigarette smoke swirling around their heads, because, face it, that stuff looks great on film. Ho's performance is a silent but potent rejoinder to all of that machismo. Her character, one of the few women in the movie, is a mute presence, a supposedly powerless observer in a world ruled by men. She may say nothing. But she sees everything.