The party's culture of concealment has led to embarrassment and personal destruction. Isn't it about time for the right to cure its homophobia? 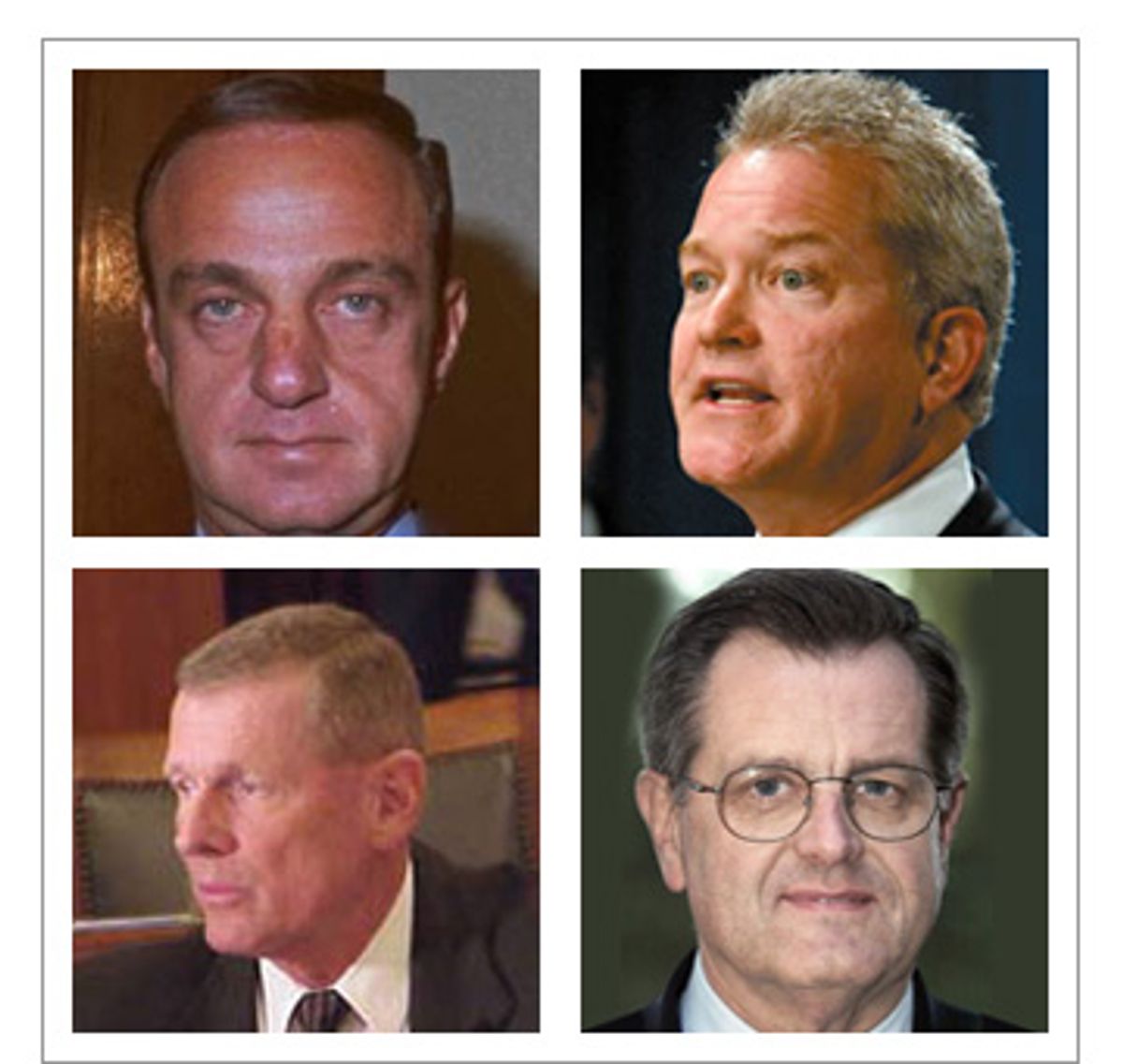 That was the cry of the lovelorn schoolteacher in the classic 1997 film "In and Out," after her diffident fiancé reveals his true orientation (and dumps her for Tom Selleck). Ten years later, more than a few discombobulated Republicans must be muttering the same question, despite the fervent denial of Sen. Larry "Wide Stance" Craig that he is, indeed, gay. As one embarrassing episode follows another, with almost predictable regularity, perhaps it is time for Republicans and conservatives to ask themselves an obvious question: What makes the Republican Party -- and the conservative movement more generally -- so attractive to closeted homosexual men?

Somewhere in the textbooks of psychosexual pathology there may be a straightforward answer, so to speak. Does the party draw closeted men because they can hide behind Republican homophobia? Or does the party promote homophobia as a political ruse while closeted men run the show? Whatever the answer, the result is routine humiliation and personal destruction. Even worse, the party's culture of concealment encourages right-wing gay-bashing, such as Tucker Carlson's grotesque boast that he and another adolescent thug beat up a gay man who "bothered" him in a bathroom years ago.

Telling such manly tales may relieve the insecurities of Republicans who must contemplate the ever-mounting archive of homosexual history in their party's ample closet. But only Republicans who are truly in denial can ignore the long parade now led by the reluctant Craig -- a conga line of right-leaning queens that dates all the way back to the late Roy Cohn, Joe McCarthy's infamous henchman and an intimate friend of the Reagans'. Perhaps, like Cohn, today's closeted Republicans believe that they aren't really gay at all, except for a few minutes in bed (or in the men's room).

No matter how Cohn deluded himself about his sexuality, however, he was among the founders of modern conservatism, along with late fundraiser and activist Marvin Liebman, who finally came out and denounced the homophobia of the right several years before his death. Both of them lived to witness the conservative resurgence of the Reagan era, led by the likes of Terry Dolan, who operated the National Conservative Political Action Committee from deep within his lifelong closet, attacking "the growing homosexual movement" until not long before he died of AIDS, and Arthur Finkelstein, the renowned Republican political consultant who worked for the NCPAC and dozens of Republican senators, often emphasizing their opposition to gay rights and in particular to gay marriage -- at least until three years ago, when Finkelstein married his male partner in their home state of Massachusetts.

Hypocritical as Finkelstein may be in his mercenary way, at least he is no longer living a lie, having been outed more than a decade ago in the pages of Boston Magazine. Over the past few years, the frequency of outing on the Republican side of the aisle has intensified.

On the first day of the party's New York convention in 2004, the closet doors were flung open again when Rep. Ed Schrock, a Republican from Pat Robertson's home district in Virginia, was forced to drop his bid for reelection. The outing Web site BlogActive.com exposed the secret homosexual life of the 63-year-old retired career Navy officer, Vietnam veteran and member of the House Armed Services Committee.

Hiding in the next Republican closet to be aired out was Jim West, then mayor of Spokane, Wash., an important politician in the Northwest with a strong reputation for opposing gay rights and advocating the removal of gay teachers from schools and daycare centers. In 2005, the Spokane Spokesman-Review revealed that West had been leading a double life, trolling for male sexual partners on the Internet and allegedly abusing two teenage boys who came under his care as a Boy Scout leader. These gamy stories led to West's ouster as mayor by the end of the year. (He died of cancer several months later.)

Then in 2006 came the stunning Mark Foley scandal, which featured the curious "Don't ask, don't tell" behavior of the Republican congressional leadership when confronted with evidence that the Florida representative was pursuing teenage male pages. The Republicans seemed to hope that they could conceal Foley's creepy behavior toward the boys in their care until after the midterm elections. Thanks to Lane Hudson, the gay rights activist who disclosed Foley's misconduct to the media, that scheme backfired badly. The reverberations amplified perceptions of the Republican Congress as decadent and self-serving, leading to the midterm debacle that returned control of Capitol Hill to the Democrats.

The November 2006 election results had scarcely been confirmed when a former male prostitute named Mike Jones convincingly accused right-wing evangelical preacher Ted Haggard of joining him in narcotics-fueled sex romps. Following the familiar cycle of denial and confession, Haggard stepped down as the head of his Colorado Springs, Colo., church and as president of the National Association of Evangelicals, a position he had not hesitated to use on behalf of Republican candidates, notably including George W. Bush. Until his downfall, Haggard had participated in a weekly telephone conference with Bush and other evangelical leaders. The White House and his former comrades on the religious right sought to downplay Haggard's influence after his confession to "sexual immorality."

Around that same time, Michael Rogers of BlogActive.com -- the gay blogger who outed Schrock in 2004 -- posted the first allegations concerning Larry Craig's misbehavior in men's rooms around the country. Having learned about Craig many months earlier from men who reported their encounters with him, Rogers had been warning as early as January 2006 that he was planning to out a senator. His initial reports on Craig attracted the attention of the Idaho media, which nevertheless held back the story until the senator's arrest in a Minnesota men's room and misdemeanor plea became public.

The Craig scandal overshadowed still another embarrassing saga from the closets of the red states. During the first week of August, Glenn Murphy, a Republican county chairman from Indiana, mysteriously stepped down as president of the Young Republican National Federation. In a letter to the nation's Young Republican leaders, he claimed that he was obliged to resign because of a pending major business opportunity. That explanation seemed unlikely in light of news concerning an investigation of Murphy for sexually molesting another man after a party. That young gentleman, a guest in a house where Murphy was staying, awoke the next morning to find the chairman's mouth on his genitalia.

Murphy's star may no longer rise, but his tale is a portent for the future. So long as Republicans promote homophobia, the party's closets will be crowded.