IRobot's newest vacuuming robot has improved cleaning power and better handling to get around your filthy home. But is the Roomba happy? 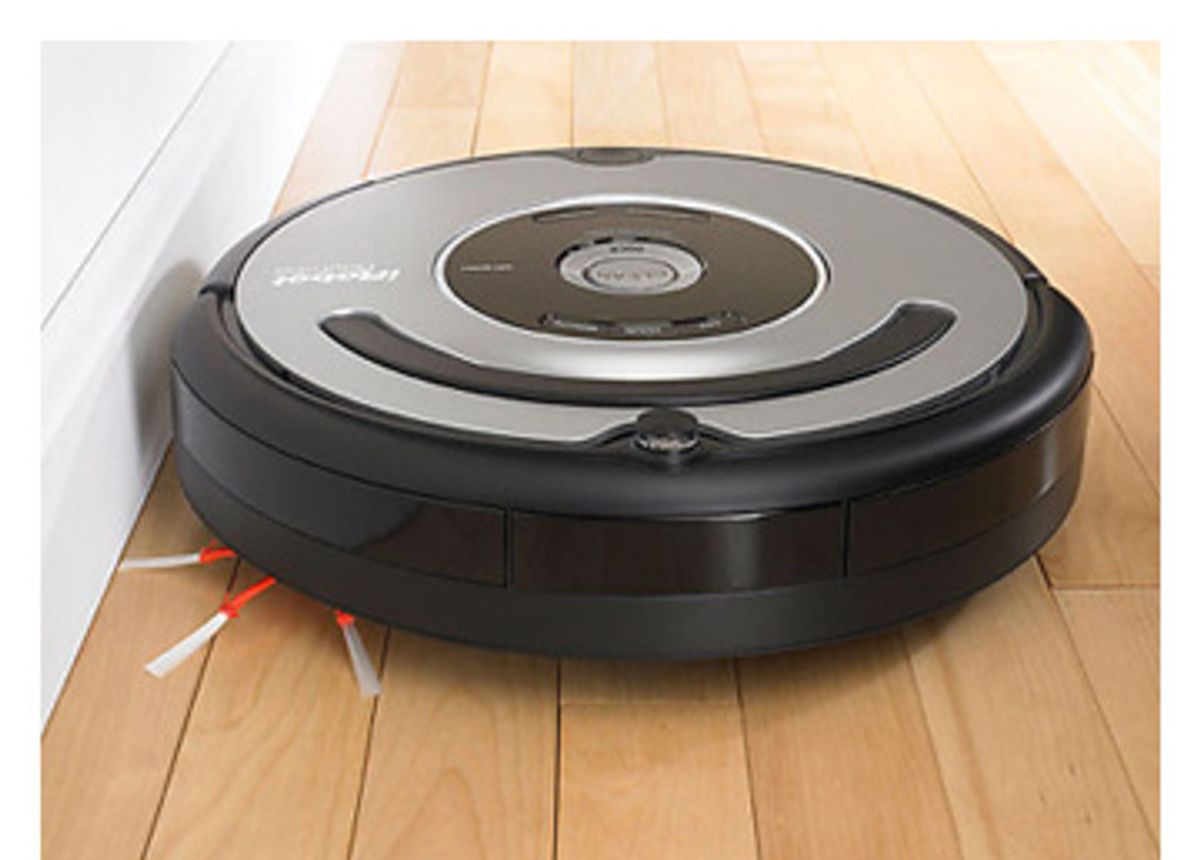 Will the robots forget about all this when they take over? Or will they want payback? Because it's Labor Day 2007 and I am flagrantly flouting the spirit of the holiday, mercilessly forcing our future robot overlords' kin to clean my apartment. No, it's worse than that: Like a 21st century Simon Legree, I am taking pleasure in my dominion. I've been fostering kittens all summer and the carpet in my bedroom is so full of cat litter the pebbles jam up between my toes when I go barefoot. There's also cat food and catnip and paper receipts and coins and lint clogging the pile, and were I not a sadist, I'd get out the Hoover and do the work myself.

But why should I? A week ago I got the Roomba 560, the newest incarnation of the robotic vacuum cleaner that glides around your house automatically, cleaning up the floors by itself, without a lick of effort from any human. I feel that I should feel bad, but in truth, I'm giddy.

For my cruelty I offer this self-serving justification: This robot was designed to clean, and it claims to love to do so (it has a voice: female, soothing). IRobot, its manufacturer, has thoroughly upgraded the Roomba over previous versions; compared to my old model -- the Roomba Discovery -- the Roomba 560 is a more game servant, vacuuming my apartment with more determined expertise and greater apparent joy. This vacuum cleaner sucks -- regularly, on schedule, hard and with nimble poise, dancing around my house in an outwardly blind search for dirt, a dash that ends in remarkably clean floors.

IRobot's big improvement is in cleaning power. The Roomba 560's rotating brushes are hardier than those of the old model, and its vacuum is more effective; consequently it'll pick up trash -- coins, twist ties, paper, nuggets of food, dead leaves, and all manner of other dust and debris -- that the old version would just glide over.

The 560's traction is also better than that of previous Roombas. I've got a half-inch-high rug in my living room that my Discovery would often fail to negotiate. The new Roomba climbs up and cleans the rug, eliminating a spot I used to have to do by hand.

I also found the new Roomba exceptionally capable of disentangling itself from trouble. The habitat of the tech reporter is characterized by an overgrowth of cables. Stray audio and video cords can be found littering every corner of my house, and my old Roomba often slurps up one of these and gets stuck.

The 560 is much more discerning in what it eats. Once, it sucked in an RCA video cable that was hanging from my TV unit. After a few unpleasant sounds -- call it indigestion -- the Roomba spit out the cable and went along with its work. It passed the ultimate tangle test -- negotiating the warren of computer cables under my desk -- so well that I considered offering it a 401K.

The improvements make for nearly hassle-free vacuuming. The worst thing about my old Roomba was the pre-cleaning. IRobot claims to have built advanced guidance systems into its robots, but to get your room clean with previous models you had to remove most obstacles from the room first. Trust me: You quickly begin to resent a cleaning robot that only deigns to work if you rearrange furniture and pick up shoes, backpacks, cat dishes, magazines, clothes and your various artifacts of a life well-lived.

I still had to pre-clean for the new Roomba -- the area under my dining table just wouldn't get done if I didn't move the chairs first -- but the 560 did remarkably well even in a room that wasn't vetted for its safety. Press the Clean button and watch it begin to work -- it traverses the room in spirals, odd zigzags, and along the walls and corners, in a cycle that lasts 35 minutes to more than an hour, depending on the size of your place and the Roomba's remaining battery charge.

A couple of times I let it roam all over my one-bedroom apartment, and it never once got stuck anywhere. Because the 560 has an infrared proximity sensor built in its front, it didn't knock anything over either; unlike the old version, the robot slows down a bit before it's going to bump into something, treating your house with the kind of gentleness that one expects from good help.

Like previous Roombas, the 560 comes with two battery-operated "virtual walls." These devices shoot out an infrared beam that confines the robot to a single room, which is helpful if you only want to clean a small area. The 560's virtual walls connect to the Roomba via radio signals, which allows them to turn on only when your robot turns on. Because the 560 comes with built-in scheduling, the system allows for completely automated cleaning -- the Roomba and the virtual walls can be set to all go on when you're not home, with the Roomba venturing back to its dock when it's done.

The 560's virtual walls also include a new "lighthouse" mode. The lighthouses are supposed to guide the robot through your house -- you place one outside each room, and the robot will clean up that area before it goes to the next room.

Unfortunately, I found that the device acts less like a lighthouse than a crossing guard; it does not attract the Roomba so much as it prevents the robot from entering certain areas at certain times. In practice, then, the robot will clean the rooms in which you've set up lighthouses as well as other rooms where it may accidentally venture, making the lighthouse mode a bit useless.

The new Roomba, like the old Roombas, will not function as a replacement for your traditional vacuum cleaner. There will be places in your house it won't be able to get to -- perhaps behind the toilet, or maybe the recessed areas around your cabinets, or under the bed. The Roomba also takes longer to do a room than it would take you to do it. If you've got a friend coming over in 20 minutes for a visit you hope might include an extended tour of the bedroom, you're better off vacuuming there by yourself.

But the Roomba never tires, it never complains, and it's a glutton for dirt. Much has been made of Roomba owners' tendencies toward anthropomorphization. People name their Roombas, they let their pets play with them, and they clog up YouTube with the sort of how-cute home videos that normal people make about their kids.

When you get a Roomba you understand why. You just can't stop watching the thing work. And as you watch, you're moved to wonder: As it glides around your floors so effortlessly, as it accedes to your every command, is the Roomba ... happy?

Does it lament its lot in life, the fact that you've purchased its servitude ($350 for the Roomba 560) and expect it to pick up all your garbage? Maybe for a second or two, as it sucks up the muck around the litter box, you feel a twinge of empathy. Then you go back to the crossword.

Watch a video demonstration of my robot pal.