"Big in every way" 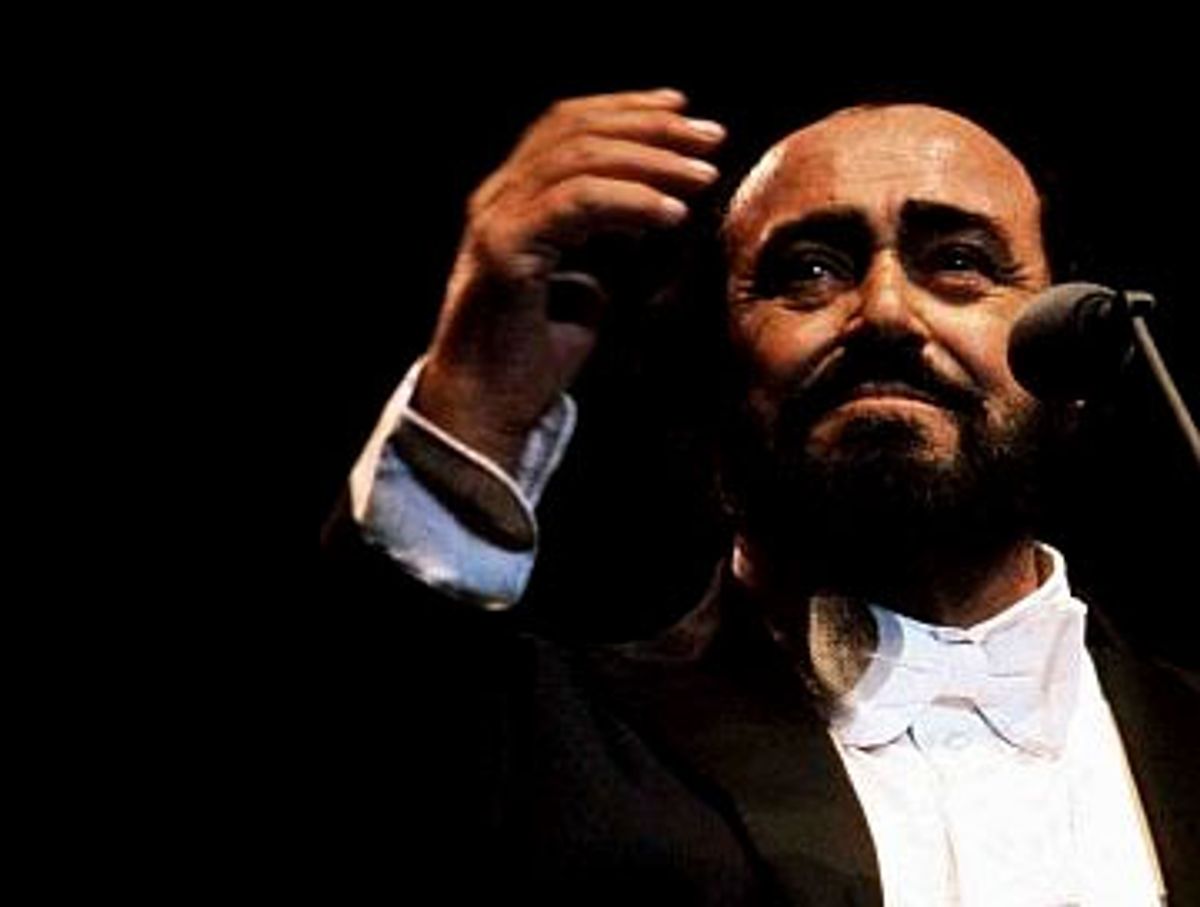 In January 1972, I sang my first "I Puritani" opposite Luciano Pavarotti in Philadelphia. Luciano's career was then just beginning to take off. The first time I stood on stage with him and heard him sing, I thought: My God, this man sings so beautifully. I never heard Caruso live, of course, but I can't imagine being more touched by a voice than I was when Luciano sang Arturo to my Elvira.

Before the end of 1972, Luciano and I sang "Lucia" in San Francisco. I'm not exaggerating when I tell you that our engagement out there created civic pandemonium. Luciano had become a superstar in the blink of an eye, I was at the top of my game, and together we knocked San Francisco for a loop. Every night we sang, the opera company had to turn thousands of people away. The crowds outside the opera house were almost as big as those inside.

... The Pavarotti that people talk about now is such a contrast to that chubby, funny guy who used to take walks with me in San Francisco, who'd sit in my dressing room and tell jokes during performances, and who'd cook us spaghetti afterward. In the early days, when Luciano got fat, I think he was tortured by all the jokes made about his appearance. On the surface, he's now adopted a very cheerful attitude about his weight, but it's probably a source of great sadness to Luciano that he can't control his appetite.

From "Beverly: An Autobiography," by Beverly Sills with Lawrence Linderman (Bantam Books, 1987)

Jean-Pierre Rampal, flutist: "Many clams, down the hatch"

I introduced Luciano Pavarotti to Elaine's [restaurant in New York]. My son, Jean-Jacques, and I had been to hear him give a Madison Square Garden concert ... Luciano invited us backstage after the event. He said there was going to be a reception.

As usual, the greenroom filled up as Luciano was changing, and I happened to notice that what little there was of the buffet was fast disappearing. Like most artists, Luciano doesn't eat before a concert.

So when Luciano came into the room, I immediately pulled him aside.

"There isn't enough food here to satisfy a Mimi!"

Moments later we were seated in the middle of Elaine's, pondering the menu. "Vongole al forno!" cried Luciano.

The first dozen clams arrived, and Luciano wolfed them down the way you'd expect a tenor who'd performed before forty-five thousand people would.

In no time at all, Luciano had managed to consume about four dozen of the delicious little beasts. Jean-Jacques ... looked on, wide-eyed. Actually, that's only about twenty-four mouthfuls. And I must admit that four dozen clams don't frighten me in the least, either. (Early 1970s)

From "Music, My Love: An Autobiography," by Jean-Pierre Rampal with Deborah Wise (Random House, 1989)

1980 TV special with Luciano Pavarotti: After he heard me sing, he decided we should do our comedy bit on the tennis court instead. He tried to jump the net and fell flat on his face.

The things I'd dreamed about for years. Being on Johnny Carson's "Tonight" show is right at the top of the list ... I agonized for days over what I would wear, what he would say, what I would say, and on and on ...

I waited in the wings for my introduction. I took a deep breath, and when I heard Johnny say my name, I walked out through the curtains, waved hello, walked toward him, and took my seat. This was really it. The only thing I remember Johnny saying to me, "I hear you don't like three things -- liver, lamb, and opera." By the time he got to the word things, I knew exactly what was coming. This was one of those quotes I'd given to the press. But here I was sitting next to [fellow guest] Pavarotti, probably the greatest living opera singer in the world. For a moment I froze, but then Mr. Pavarotti came to my rescue by saying, "I don't like liver or lamb, and perhaps tonight I don't like opera either." How sweet of him! I grabbed his hand and told him how wonderful he was, and the next day I bought some of his albums. And after listening to them, I've decided that I do like opera, after all. (Los Angeles, mid-1980s)

One day as we were doing our [voice] exercises, there was a knock at the door. Dr. [William] Gould [an ear, nose and throat specialist] entered with a very imposing-looking man. It was Luciano Pavarotti. After we were introduced, the doctor asked me to sing something for him.

"I just want Luciano to hear your voice," he said to me.

I was terribly intimidated, but I didn't dare refuse, so I asked him what I should sing.

I sang the first thing that came into my head, several verses of a song I hadn't thought of for a long time. It was called "You Bring Me Joy." Luciano Pavarotti complimented me, saying such things as, "You have a voice that could pierce the heart." (New York, late 1980s)

The International Pavarotti Competition ... I decided to enter ... the finals in Modena [Italy] ...

Luciano Pavarotti and Tito Capobianco were the jury ...

After I had completed the aria, I was in a state of shock, having sung for the great maestro. He said, "Thank you, thank you. Next!" Well, I thought that was some experience, and all he said was "Thank you." I was hoping for more, but more wasn't coming. About an hour later I was walking behind the theatre when by chance I bumped into Signore Pavarotti himself. I said, "Hello." He responded, "Yes, the Irishman. You have a very nice voice. Very pure, but for such a big man, the voice should be bigger." It was now my turn to say, "Thank you," and I did. I felt honored that he liked my voice, whatever size it was. (1995)

The annual Pavarotti and Friends concert in Modena, Italy on 12 September 1995. [Fellow U2 band member] Edge and I brought our parents along, who were big opera fans. Pavarotti picked us up from the runway of the airport in a white Mercedes. We drove fifteen miles to his house, through the gates, up a hill, round a corner, round a bend, past the house and up to a table. He got out and bellowed, "Pasta!" A beautiful woman walked out with the food and we sat down and ate. It is at the table that friendships are really made. He is an extraordinary individual, big in every way -- big heart, big voice, big girth, big appetite.

From "U2 by U2" (Bono, the Edge, Adam Clayton, Larry Mullen Jr.) with Neil McCormick (HarperCollins, undated)

I've had to fight a few weird matches -- those against myself. Nightmares, sleep disturbance, jet lag, weariness after long-haul flights -- who hasn't experienced these things? ... What bothered me most of all was claustrophobia ... I hated feeling hemmed in.

I had to take a firm grip on myself not to lose it completely. It nearly happened once, after a concert by the three tenors Luciano Pavarotti, Plácido Domingo and José Carreras in the Munich Olympiahalle. Barbara [Feltus, Becker's wife] and I met the singers backstage after the event. We were going to a huge restaurant afterwards, where there'd be thousands of guests of honor. There were about ten of us in the stadium's lift: the conductor, the singers, wives, girlfriends. The lift got stuck. Not for a couple of minutes, but for half an hour. Thanks to my height I had space and air. Domingo, my wife and Pavarotti all held hands, hoping it would be over soon. Then Pavarotti began to sing "Ave Maria." I didn't say anything. I was just thinking of my own little unimportant life, and trying to hold myself together, though the thought of what would happen if no one rescued us soon almost drove me mad. The tenors sang one song after another, and everyone hummed along. Anxious arias -- what a scene that was. Then there was a jolt -- the rescue. The concert in the lift was over. (Early 1990s)

From "The Player: The Autobiography," by Boris Becker with Robert Lübenoff and Helmut Sorge (Bantam, 2004)

Chelsea [Clinton] loved the opera and whatever she loved, the President loved. So there Clinton and I were with Chelsea and her date in the main box at the Met to hear Luciano Pavarotti in Verdi's "Aida," which, just my luck, runs nearly three hours. They say you know at your first opera whether you're going to be an opera person or not and I had my answer, all right. If I had been sitting anywhere else, I would have nodded off in the first act. There in the main box with the President and Chelsea, with everyone watching, I had to avoid that at all costs ...

We went backstage afterward to meet Pavarotti, but he was nursing a cold and was on doctor's orders not to talk too long. In fact, he probably wouldn't have performed that night if the general manager had not told him that with Bill Clinton in the audience, the show must go on. As Clinton and Pavarotti talked, all I could think about was getting back to the house in Chappaqua to play a great twenty-hand card game with changing trumps called "Oh Hell!" which Clinton had recently learned from Steven Spielberg and then taught me. (New York, 2001)

From "What a Party! My Life Among Democrats: Presidents, Candidates, Donors, Activists, Alligators, and Other Wild Animals," by Terry McAuliffe with Steve Kettman (Thomas Dunne Books/St. Martin's Press, 2007)