The Petraeus road show will roll into Washington with dubious claims that troop increases have reduced violence. 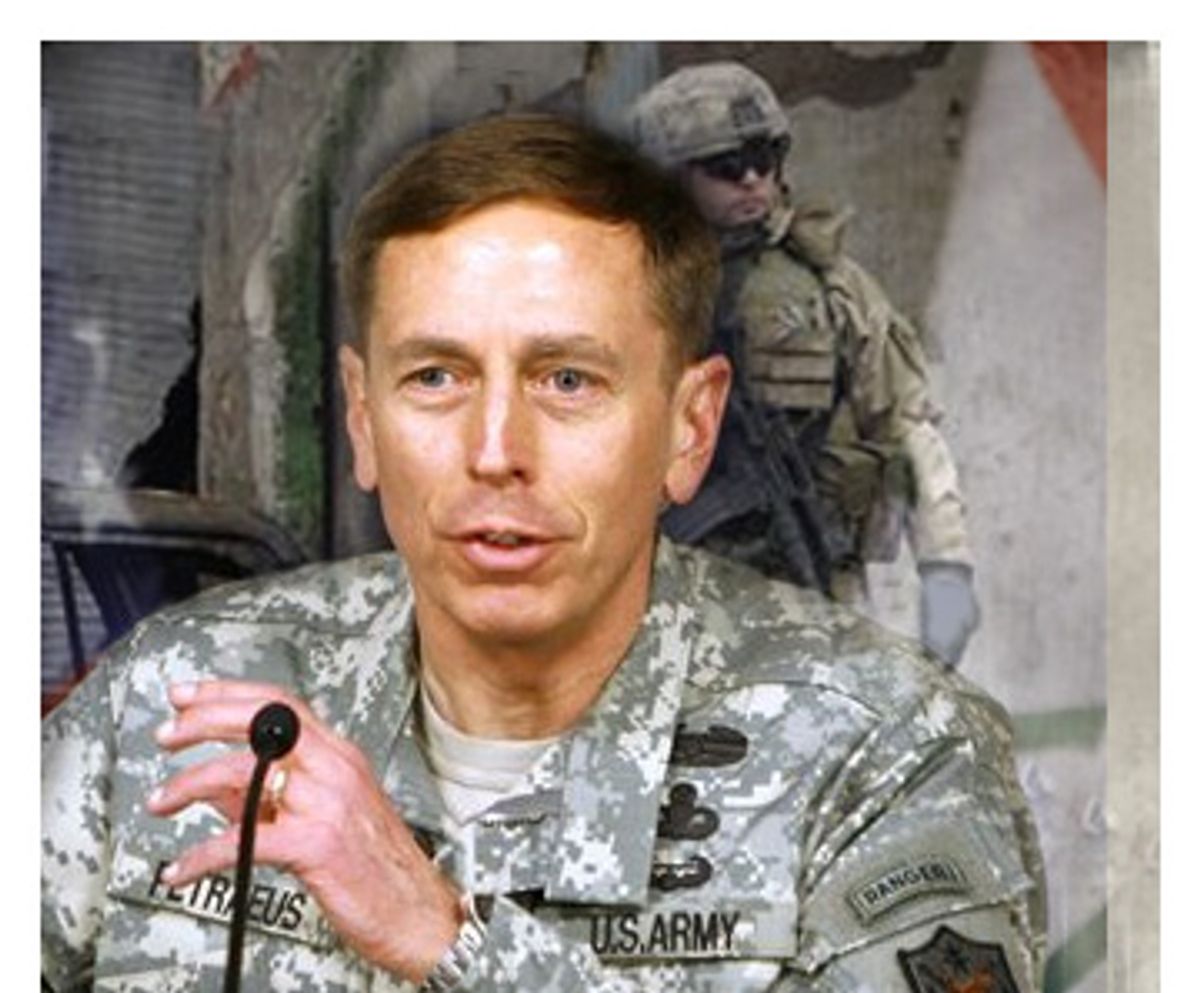 When Gen. David Petraeus testifies Monday on the effects of the American troop escalation in Iraq, don't expect him to dwell on the strategic irrelevance of the "surge," which was supposed to revive chances for political reconciliation among that country's warring ethnic and religious factions. Were the surge to be judged by that original metric -- a reduction in violence sufficient to encourage real cooperation among the warring sides -- then it has certainly failed so far.

The commanding general can be expected to sidestep such unpleasant topics and to focus attention instead on Anbar province, which President Bush himself has declared an exemplary "success" -- and on the Pentagon's hotly disputed casualty and incident statistics, which supposedly prove the value of the surge.

As the most astute journalists have observed, there are few sources, if any, for reliable data about Iraqi civilian deaths, whether at the hands of sectarian killers or ordinary criminals (or the police/militia forces that the United States has armed and trained). It requires truly extraordinary gullibility on the part of mainstream reporters to accept any such statistics from the Pentagon, whose leaders have misled us so badly about Iraq from the beginning. Where civilian casualties are concerned, it is worth recalling that the Pentagon and the Bush administration initially did not bother to count them -- or at least refused to release whatever counts they had compiled. Estimating the number of civilian dead and wounded was left to nongovernmental sources such as Iraq Body Count and the Lancet, the renowned British medical journal.

But now the White House and the Pentagon, up against growing domestic pressure for withdrawal from Iraq, would like to convince us that they have happy numbers showing that more U.S. troops has meant fewer dead Iraqis. The underlying methodology may be highly questionable, as the Government Accountability Office has argued. (Petraeus has retorted that the GAO methodology is wrong because it makes the same alleged mistakes as the CIA and the Defense Intelligence Agency -- a somewhat confusing response, since the DIA is the Pentagon's own agency.) The data may be subjected to massaging, coloring, lipsticking and a host of other cosmetic procedures, as the Washington Post noted Thursday in an important story by foreign editor Karen DeYoung. The results may depend on how military analysts decide to enumerate each specific incident -- determining whether a killing should be categorized as sectarian, combat related or criminal. And such results can be altered depending on the political needs of the moment.

Indeed, the Pentagon has reportedly gone back over the 2006 data in anticipation of the upcoming hearings on Iraq policy. Meanwhile, however, the safest assumption is that the numbers cited by Petraeus and U.S. ambassador to Iraq Ryan Crocker to measure the success of the surge reflect the broadly flawed approach criticized last year by the Iraq Study Group. Complaining that Bush administration statistics routinely underestimated violence in Iraq, the group's report sardonically warned that "good policy is difficult to make when information is systematically collected in a way that minimizes its discrepancy with policy goals." Does the phrase "weapons of mass destruction" sound familiar?

Although a variety of news media and independent organizations question the information provided by the White House and the Pentagon, the Bush administration does enjoy the assistance of certain enablers in Washington. Among the most notable is Michael O'Hanlon of the Brookings Institution, who has been promoting the supposed success of the surge ever since the Pentagon escorted him on a tour of selected sites in Iraq earlier this summer. Along with several other Brookings analysts, O'Hanlon maintains an "Iraq Index" of selected data, which was recently updated to reflect his assessment of "significant" improvement on the Iraqi battlefront.

While examining the freshly updated material on O'Hanlon's site, however, it is possible to find numbers that aren't quite so uplifting. If the civilian casualty numbers have been fiddled with and fudged, what about the number of Iraqi police and soldiers killed each month? Consider the same six-month periods -- and let's call them "Friedman Units" -- in 2005, 2006 and 2007 for a fair comparison. Between March and August 2005, a total of 1,501 Iraqi police and troops were killed. During the same period last year, a total of 1,124 were killed. And from March through August of this year, a total of 1,212 were killed -- an uninspiring increase of 88 overall, although the month of August itself showed a marked drop.

Whether the escalation has made any substantial impact on Iraqi security will remain arguable, perhaps, although the numbers above, bolstered by many others, suggest strongly that it has not. There is, however, one number that can only rise as we deploy more U.S. troops to Iraq: the number of American combat deaths. For the six-month Friedman Unit in 2005, that statistic was 384; for the FU in 2006, it was 345; and for the FU just completed in August, the number was 577.