This nasty action thriller is way too pleased with itself to be fun. 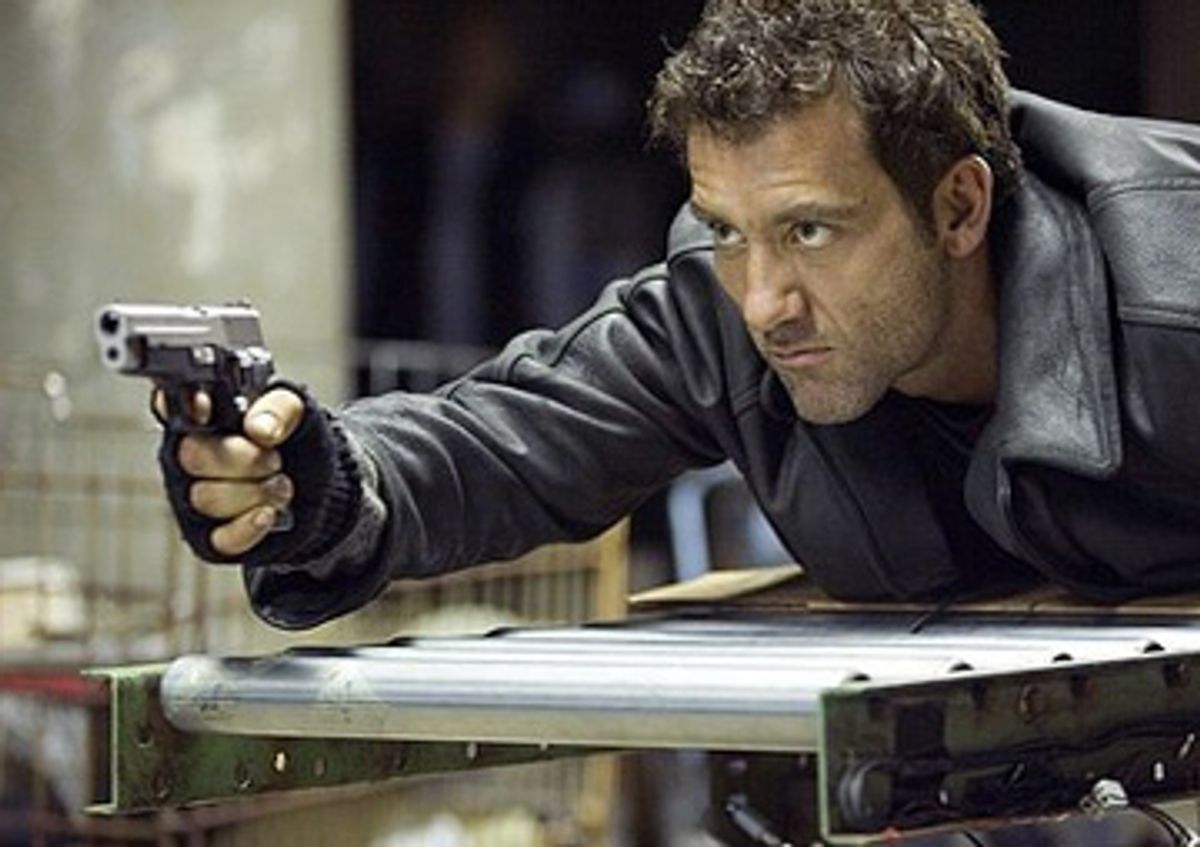 A truly sick action thriller needs at least a dash of humility to be effective: Movies like Robert Rodriguez and Frank Miller's "Sin City" or the Rodriguez-Quentin Tarantino double feature "Grindhouse" are unrepentantly twisted, violent and depraved, but they at least spring from a fresh, bubbling country stream of feigned innocence. No matter how many horrors or perverse delights these movies parade before us, the filmmakers' unspoken and completely bogus subtext is always: "We didn't mean to show you naked boobies or exploding sternums -- honest!" That obvious self-deception is part of the game, and part of the fun. "Shoot 'Em Up," on the other hand, is the kind of movie you get when you remove that faux-innocent pretext: The picture is so over the top it disappears up its own ass.

The premise of "Shoot 'Em Up" makes it sound like good, lowbrow fun: Clive Owen plays a guy known only as Smith who, one night while sitting at a somewhere-anywhere urban bus stop munching a carrot, can't help noticing that a heavily pregnant young woman has just run past him, terrorized. A bunch of baddies are after her and her unborn child -- but why? Smith doesn't stop to ask; he simply acts, first saving the woman and then helping deliver her baby. (He cuts the umbilical cord by blasting through it with a bullet.) The mother is killed by the baddies; impulsively, he snatches the infant and tries to find a safe haven for him, namely, a bordello where he happens to know a lactating hooker named Donna (short, perhaps, for Madonna?), played by Monica Bellucci. The evildoers are led by a sniveling, smirking baldy named Hertz (Paul Giamatti), and the plot -- which sometimes pretends to make sense and at other times doesn't bother -- supposedly has something to do with gun control. Heavy, man.

Writer-director Michael Davis has tried to make a gleefully nasty thriller packed with noisy, comic-book action, the kind of thing where guys fly through the air a lot, John Woo-style, firing two guns at once. But the picture is just a catalog of strained camera moves and preprogrammed gags, with no wit or style. The movie struts like a peacock, pleased with itself for being so supposedly transgressive. When Hertz squeezes a female corpse's nipple, the camera moves in with calculated delight -- we get lots of time to relish how sick he is, just in case we're slow on the uptake, which Davis assumes we must be.

The opening section of the picture owes a lot to the daring baby rescue scene from Woo's "Hard Boiled" (Davis has cited the movie as one of his chief inspirations), but the conceit is so overextended, it's wearying. It should be fun to watch Giamatti play a bad guy, but he sneers in a single shade of beige: A good villain has many colors in his or her palette. (It doesn't help that the camera zooms in on his cheeks so he looks piggish and gross.)

The only things that make "Shoot 'Em Up" remotely worth watching are Bellucci and Owen. Bellucci doesn't have much to do here, and the grayish, grainy tone of the picture (the cinematographer is Peter Pau) makes her beautiful skin look like the surface of the moon as viewed by Neil Armstrong. But she gamely struts through the ridiculous paces the movie puts her through, and in her fur jacket and miniskirt outfit -- and, in some scenes, considerably less -- she's marvelous to look at.

Owen doesn't play his role for laughs, which is exactly why the performance, unlike the movie around it, works: Here, he's the same grave, conscientious presence he was in Alfonso Cuarón's harrowing, starkly beautiful "Children of Men." In some ways, as a cranky, disillusioned guy pressed into service to save an innocent, he's playing the same character, only this time he's stuck at the center of a smug cartoon. In the movie's best sequence, he boards a bus with his rescued charge, who appears to have been shoved into a cut-off sweater sleeve for warmth. He spies another bus rider with an infant: Her baby has a hat; thus, his baby must have a hat. He removes one of his socks and tenderly pulls it over the baby's ears -- the excess dangles jauntily like a conventional stocking cap. The moment is wonderful because Owen makes his character's thought process so clear and so readable, and we can see the pleasure his character takes in his own ingenuity. The performance is unforced and natural in a movie that's otherwise pure calculation. The sum of the movie's exploding parts adds up to nothing -- not even just good, sick fun.