Russell Crowe and Christian Bale slide into this western remake like it was a favorite pair of chaps. 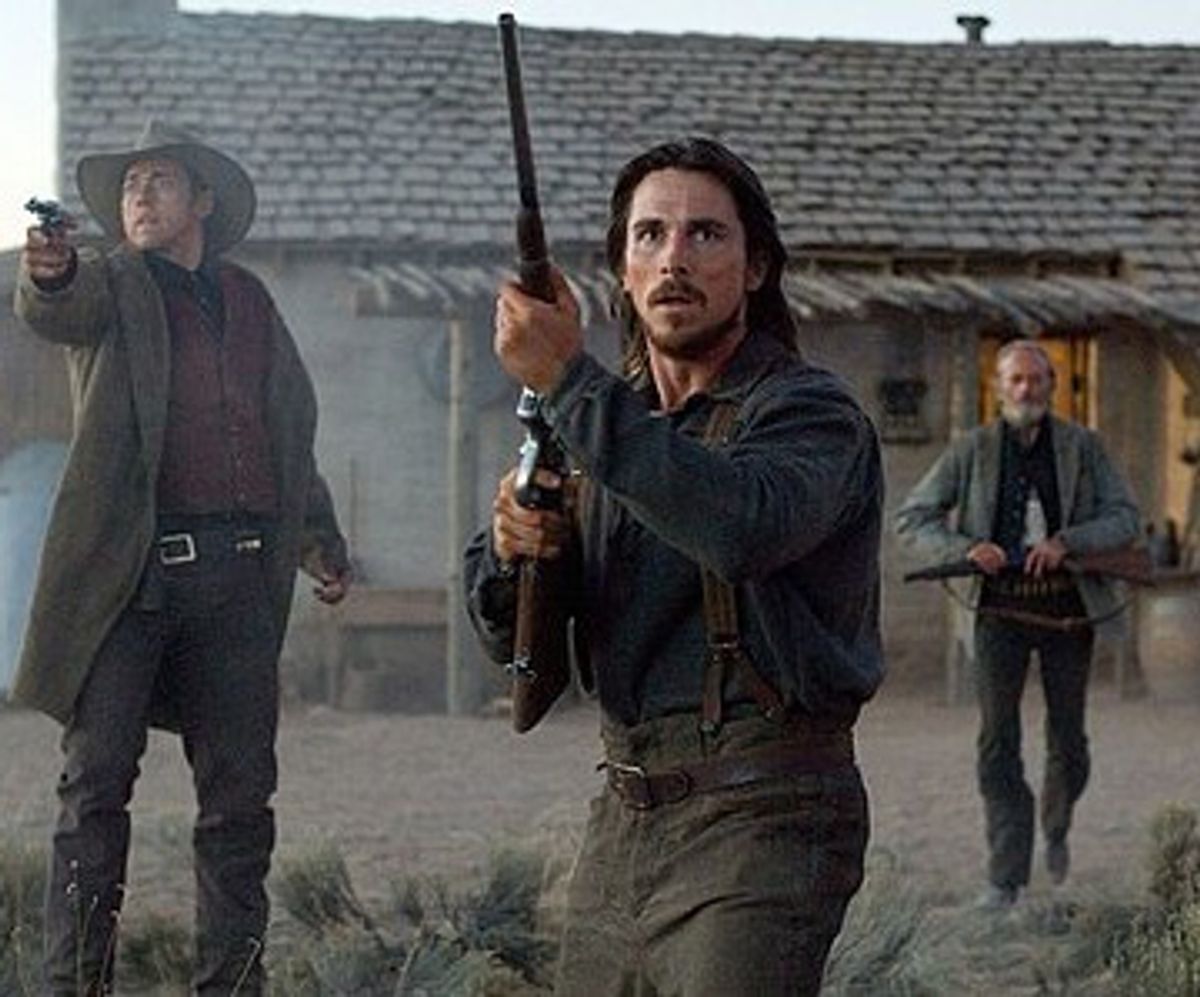 It's a shame westerns have been so out of fashion for years, considering we have so many terrific young actors -- or, better yet, actors nearing or in middle age -- to put into them. In the '50s, filmmakers like Anthony Mann and Budd Boetticher had at their disposal performers like James Stewart (the darker, postwar James Stewart), Robert Ryan, Randolph Scott and Lee Marvin. People who aren't familiar with '50s westerns tend to think of them as throwaway entertainment, but the reality is that in the '50s, even as the United States was supposedly well on its way to glorious prosperity, westerns, once a wholesome staple of American moviemaking, were becoming complex, neurotic and fascinating. Smart filmmakers were preserving (and improving on) the visual drama of the genre, even as they were also breaking new territory: These new westerns were markers for the stress points of American life, for the thin spots where our postwar dreams were surely going to fall short, and they had actors whose faces looked as if they were made to tough out the rough road ahead.

James Mangold's "3:10 to Yuma" -- a remake of Delmer Daves' 1957 picture, based on a story by Elmore Leonard, about a down-on-his-luck rancher who forges a curious bond with an outlaw -- isn't in the same league with the work of Mann or Boetticher. Overall, the picture is accomplished, intelligent and, in places, a little dull. Mangold isn't an economical filmmaker, and parts of "3:10 to Yuma" suffer from needless bloat. The new version doesn't use the same kind of blunt, visually arresting shorthand as Daves' original.

And yet somehow, maybe just barely, Mangold -- whose last picture was the heartfelt and satisfying Johnny Cash biopic "Walk the Line" -- succeeds on his own terms, largely because the actors he's working with here, Russell Crowe and Christian Bale, so comfortably inhabit the movie, and the genre that cradles it. Bale plays Dan Evans, a sharpshooter and Union Army veteran who lost part of his leg in the war. With the small pension awarded him by the government, he has moved his wife, Alice (Gretchen Mol, who somehow manages to look both luminous and careworn), and two sons (played by Logan Lerman and Benjamin Petry) to a small Arizona ranch. A drought has nearly ruined Evans' livelihood, and the property's deed-holder, knowing the railroad is eyeing the land, hopes to drive him and his family off it.

By a stroke of luck, Evans helps the authorities capture Ben Wade (Crowe), a raffish, wily and seemingly unprincipled outlaw with dead aim and a penchant for holding up stagecoaches and railroad cars. For a sum that will allow him to save his ranch, Evans joins a posse (one of its member is played by a grizzled Peter Fonda, another by the marvelous Alan Tudyk, of the late, lamented "Firefly") that will escort Wade from Bisbee to Contention, a three-day journey. There Wade will be herded onto a train headed for the federal prison in Yuma. The catch is that Wade's men -- led by his right-hand man, Charlie Prince (Ben Foster) -- want their leader, and they'll spare no bullet to get him back.

In Daves' version of the movie -- which Mangold says he saw at age 17 and never forgot -- Evans was played by a drawn, weatherbeaten Van Heflin; Glenn Ford's Wade was a seductive, creepy operator, the kind of guy who's neither smooth nor rough but perched somewhere on the jagged line between. They're both terrific performances, but Bale and Crowe match them, reinventing the characters in ways that honor, without imitating, the men who first played them. Mangold and his screenwriters, Michael Brandt and Derek Haas, have taken Halsted Welles' earlier screenplay and fleshed it out, adding some interesting details (Wade's battle scars, both emotional and physical, are their invention, and they were probably intended to add some topical currency to the picture) and some superfluous ones (the posse encounters a group of railroad baddies, led by Luke Wilson, that feels like padding the movie doesn't need). "3:10 to Yuma" is flabby in the middle, but its climax -- more protracted and yet also more suspenseful than in the original -- is beautifully staged, and exciting to watch. I wasn't even sure I liked "3:10 to Yuma" all that much as I was watching it; but by the end, I was already thinking I might like to see it again.

Mangold and cinematographer Phedon Papamichael pay their respects to many of the visual traditions of the older westerns, showing us dusty, underpopulated towns and landscapes that hover uncertainly between bleakness and beauty. They even give us a shot, a stagecoach driver's eye view, over the backs of a team of galloping horses -- a charming, affectionate touch.

Still, it's hard to make westerns these days: Not everyone gets the point. A few of the supporting actors don't know what to do with the slightly stiff, saddle-leather dialogue -- they don't know how to break it in, make it feel lived-in and alive. But if you concentrate on Crowe and Bale, none of that matters too much. This new "3:10 to Yuma" riffs on the themes of the original: the potential complexity of friendships between men, the feelings of duty men have toward their families, and the anxiety they suffer when they can't measure up.

Those may be trademark post-World War II, pre-"Feminine Mystique" themes, but they're timeless ones, too. Bale and Crowe slip into these roles as if they felt it were an honor to do so. It must be great fun to work on a western, to have opportunities to look cool while you're handling a gun, to wear rough jeans and leather and beat-up hats. But both Bale and Crowe take their characters seriously; they don't treat the movie as a joke or a lark. Crowe's Wade is the kind of roguish romancer we've seen him play before -- his manly-man demeanor charms a barmaid, played by Vinessa Shaw, almost instantaneously. But he doesn't downplay Wade's ruthlessness either -- in fact, his Wade doesn't seem to see ruthlessness and charm as contradictions. His eyes can be gently mocking or icily appraising, but even then you can't tell exactly what he wants: He's a man who's simultaneously looking for ways to connect and betray, as if he can't tell the difference anymore.

Bale, looking gaunt and haunted, is Crowe's match in every way. Watching his early scenes, I wondered if Bale were doomed to play the quintessential broken man who's responded to life's hardships by insisting, doggedly, on doing what's right. Of course, that's part of what his character is. But Bale pushes the role out even further, without ever appearing to push it at all. He takes moments that could be corny or overbearing and scales them down instead of blowing them up. The effect is something both casual and meticulous, a way of paying homage to the genre's past and nudging it toward the future. Crowe has been in westerns before (he appeared in Sam Raimi's 1995 "The Quick and the Dead," which is great fun), but here, he and Bale show what actors who are just a little older, and a little wiser, can bring to a genre that's been somewhat out of fashion. More westerns, done right, could mean better movies for actors to grow into.