All the recent toy recalls have revived fears about toddlers and toxins. How should parents protect their children? 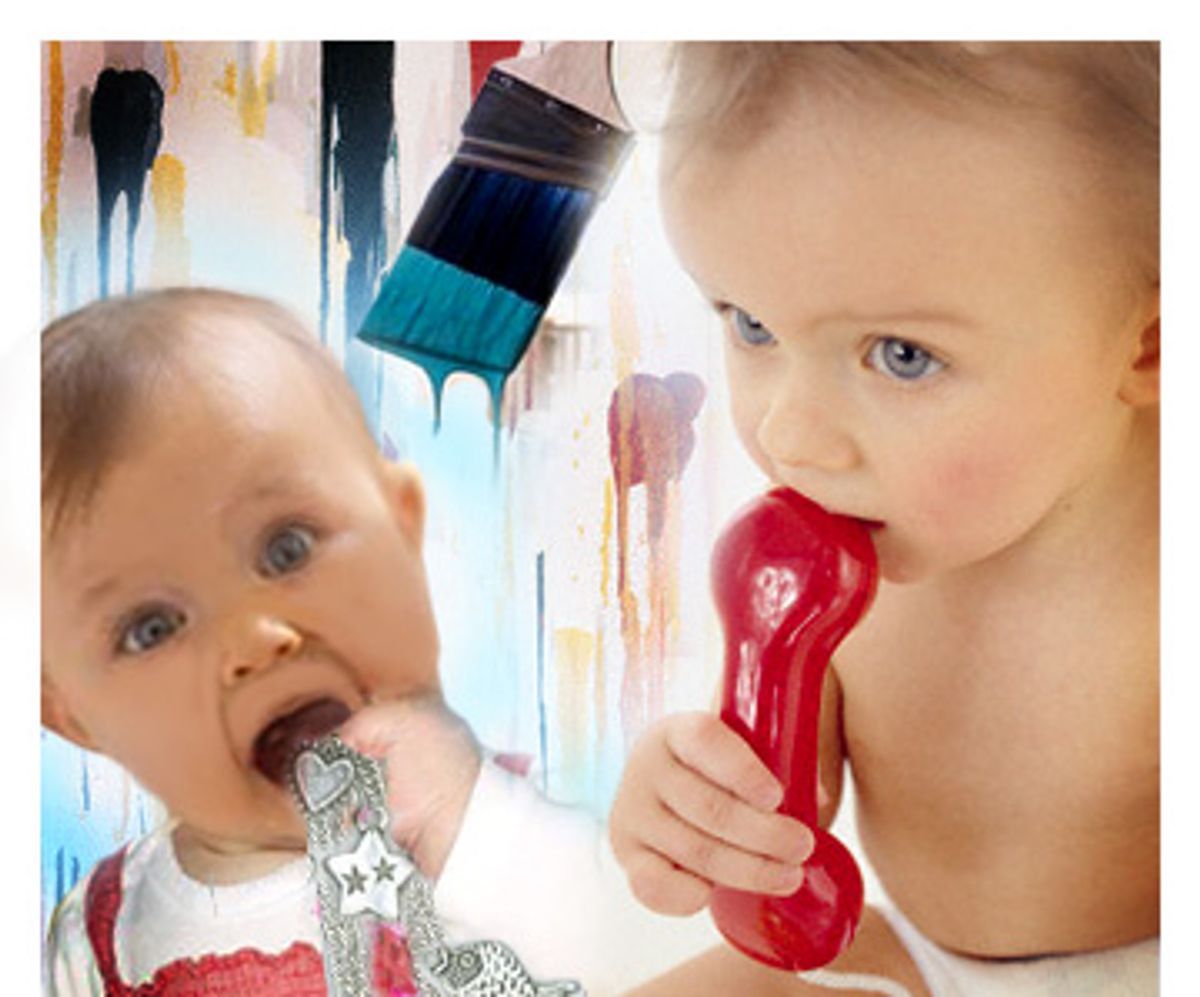 My 6-month-old-daughter is too young to play with Dora the Explorer or any of Dora's toxic-tainted friends. But all the recent toy recalls have given this new mom a case of lead on the brain. With new recalls coming out several times a week, I wanted to learn what the ubiquitous neurotoxin could do to our daughter and how I could avoid exposing her to it. I even went to the hardware store and bought two lead test kits to see if there's any lead lurking in our apartment.

While the downfall of beloved big-name brands like Elmo and Barbie makes the headlines, pediatricians are especially concerned about lead in cheap children's jewelry, like the kind often sold in vending machines and at 99-cent stores. "The ingestion of those small objects can cause serious harm," explains Dr. James Roberts, associate professor of pediatrics at the Medical University of South Carolina. That's what happened in 2006 to a 4-year-old in Minneapolis, who died of lead poisoning after swallowing a charm from a bracelet that Reebok had given out for free with the purchase of children's shoes.

Lead is so commonly found in this type of jewelry that environmental health experts advise parents to simply avoid such jewelry altogether, especially for very young children. The lead-based paint on children's toys can also present a problem if a child chews or sucks paint off the toy -- a particularly troubling prospect, as infants and toddlers love to put everything in their mouth.

Pediatricians often use a blood test to screen children for lead exposure at age 1 and again at 2, since a child who's been moderately exposed may not present any obvious symptoms. Exposure can cause irreversible damage to a child's brain and nervous system. A child who swallows large amounts of lead may also develop blood anemia, severe stomachache or muscle weakness, according to the Centers for Disease Control and Prevention. At very high levels, lead exposure can lead to seizures, coma or death.

The effects of lead on the developing brain are especially disturbing. "Lead is known to cause toxic injury to key portions of the brain that are involved in impulse behavior, attention and decision-making," says Dr. Leo Trasande, assistant director for the Mount Sinai Center for Children's Health and the Environment. Early lead exposure has been linked to lower IQ, attention deficit hyperactivity disorder, and even criminal behavior later in life. "If the exposure happens when they're 2, and they're trying to learn at age 5 or 6, it's too late to take the lead out of the environment," says Roberts. Lead interferes with the efficient development of pathways in the brain that promote learning, and once those pathways are established they're generally set for life, according to Dr. Helen Binns of Children's Memorial Hospital's lead evaluation clinic, in Chicago.

After a child's lead level is elevated, it's hard to get it down, which is what makes preventing the exposure in the first place so important. Lead exposure can be treated with drugs that help accelerate the excretion of lead from a child's blood through the urine, a process called chelation. "Chelation is not a very effective strategy. I do use it sometimes," explains Binns. The problem is that the majority of lead in a child's body is in the bone, not the blood. "Lead is tightly bound to the body in the bone, and excreted only very slowly over time. So, once you have retained lead in your body you're going to have an elevated level for quite a long time -- years," she says.

The first thing parents should do when they discover their child has a recalled toy, advises Roberts, is not to panic. (Recalled products are listed here.) He suggests inspecting the product to see if it is showing any signs of wear. "If there are teeth marks, that might be a red flag," he says. A pediatrician can then take a blood sample to check a child's lead level.

The toy chest, though, is not the only place where lead resides. Pediatric cardiologist Darshak Sanghavi points out that it's more likely that your child will be exposed to lead through old paint in your home than from a new toy. While lead in house paint and gasoline in the U.S. was banned decades ago, the lead threat still persists.

According to the CDC, nearly half a million American children have high enough lead levels in their blood to cause irreversible health effects. Most homes built before 1978, when the use of lead paint was banned in residential settings, still have lead paint under the more recent coats. Of the 77 million homes in the U.S. built before 1980, 57 million of them contain lead paint, according to the Department of Housing and Urban Development. During renovations or sanding for repainting that lead can get loose. Peeling paint in a poorly maintained home can expose the lead-contaminated layers underneath. When children eat paint chips, suck on window sills, or play in areas contaminated by lead dust and then suck their hands, they can be exposed.

Many other countries still don't have bans on lead in the residential environment, or if they do, they're very poorly enforced. Scott Clark, a professor of environmental health at the University of Cincinnati, tested paint sold for residential use in China, Malaysia, Indonesia, India, Singapore, Ecuador, Peru, Nigeria, Egypt and the Seychelles, and found high levels of lead in some of the paint from nine out of 10 countries. Only Singapore came up lead-free. "It's a shame that our kids are being exposed" to lead-contaminated toys manufactured in other countries, says Clark. "But there are going to be many more exposed in the countries it's coming from."

While some exposure to lead is inevitable, says Binn, "you can do things to have a safe and healthy home for your child." Ward Stone, a New York state pathologist, who discovered lead-tainted jewelry in his own 10-year-old daughter's jewelry box in March 2007, suggests getting a home lead check kit from a hardware store and running some tests yourself. The Consumer Product Safety Commission cautions that such home tests may not always be accurate, but Stone dismisses those concerns. "They're a failed agency when it comes to doing something about the products coming into this country," he says. "They're just using that as a defense to make themselves look like they know what they're doing, when they haven't done what they should have done."

Even though my family doesn't own any of the recalled children's products, I was inspired to give our home a lead check. I bought two Pro-Lab Lead Surface Do-It-Yourself Test Kits at a local hardware store. (I wasn't the only one with the bright idea. One local hardware store was sold out of the kits and at another I bought the last ones.) Moistening the chemically impregnated cloth test pads with eye droplets of water, my husband tested toys, paint on the walls, the kitchen chairs and the changing table, and even some ceramic dishes in our apartment. In each case, the test pads stayed white, indicating no lead.

Then our landlord decided to have some touch-up painting done on the outside of the building, which involved sanding down layers of old paint. Some dust from the sanding filtered in through the cracks in an ill-fitting shut window, and came to rest on the window sill in our bedroom. That dust turned the test pad bright pink, a positive reading for lead.

I was concerned about the dust, but our pediatrician reassured me that because our daughter didn't touch it, much less eat it, she should be fine. The doctor advised us to clean up the dust to prevent exposure when our daughter is old enough to toddle around. That took plastic gloves, detergent and elbow grease. At my daughter's one-year checkup, she'll have a blood test to check her lead level, just like hundreds of thousands of kids around the country.