Or how we were supposed to judge the "surge." 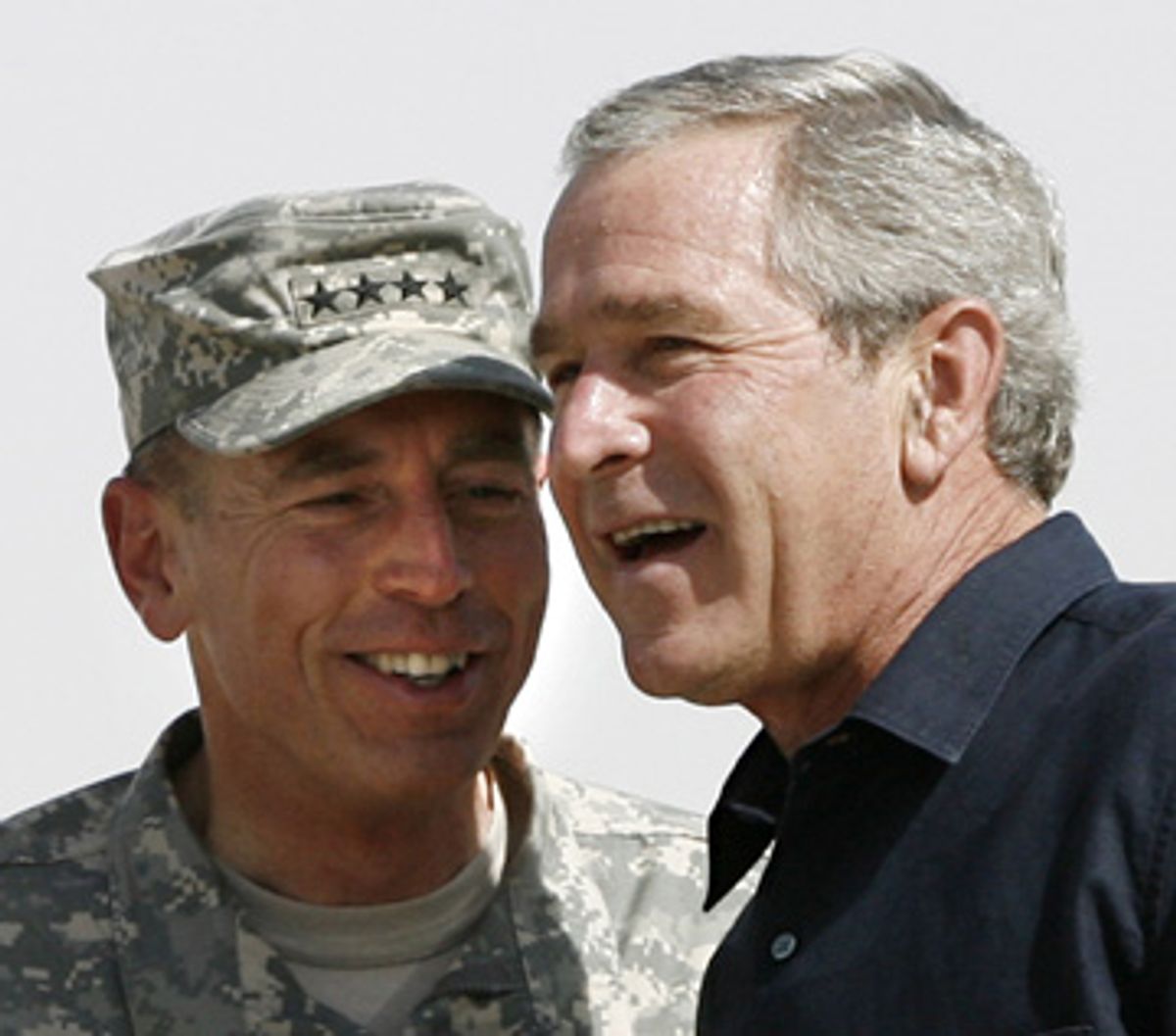 As Gen. David Petraeus and ambassador Ryan Crocker testify at a joint hearing of the House Armed Services and Foreign Relations committees today, let's remember what they and other "surge" enablers have told us about how we should be measuring what they say.

Gen. David Petraeus, April 26, 2007: "Success will take continued commitment, perseverance and sacrifice, all to make possible an opportunity for the all-important Iraqi political actions that are the key to long-term solutions to Iraq's many problems ... Success, in the end, will depend on Iraqi actions. As I noted during my confirmation hearing, military action is necessary but not sufficient. We can provide the Iraqis an opportunity, but they will have to exploit it."

Reality, Sept. 10, 2007: The Government Accountability Office says the Iraqis have met just one of eight political benchmarks. Petraeus himself said that he expected the summer "would be a time of tangible political progress," but that "it has not worked out as we had hoped."

Ambassador Ryan Crocker, May 3, 2007: "Without some sense by the American people that things are moving forward [toward political reconciliation] again over the period of the next several months, it's going to be very hard to sustain the kind of support that Iraq really needs. We need it in the near term."

Reality, Sept, 10, 2007: A new CNN poll shows that 57 percent of the American people believe the Iraqi government is "not capable" of meeting the benchmarks it has agreed to meet. Sixty percent of the American public now wants the U.S. to set and stick with a timeline for withdrawing U.S. troops from Iraq "regardless of what is going on in Iraq at the time" -- the highest number the CNN poll has recorded yet.

Gen. Peter Pace, June 22, 2007: "If you're trying to define [the success of the "surge"] in terms of level of violence, you've really put yourself on the wrong metric ... "If you had zero violence and people were not feeling good about their future, where are you? So it's not about levels of violence. It's about progress being made in fact in the minds of the Iraqi people, so they have confidence in their government, in the way forward."

Reality, Sept. 10, 2007: Petraeus will make his case today based on Page's "wrong metric"; he'll argue -- dubiously -- that sectarian violence in Iraq is down 75 percent since the "surge" began. The "minds of the Iraqi people"? As Think Progress reports this morning, a new ABC/BBC/NHK poll has 65 to 70 percent of Iraqis saying the "surge" has "worsened rather than improved" security in their country. Seventy-eight percent of Iraqis -- as close to unanimous as you'll get in any poll -- say conditions in their country have gotten worse since the winter, which is when the "surge" began.