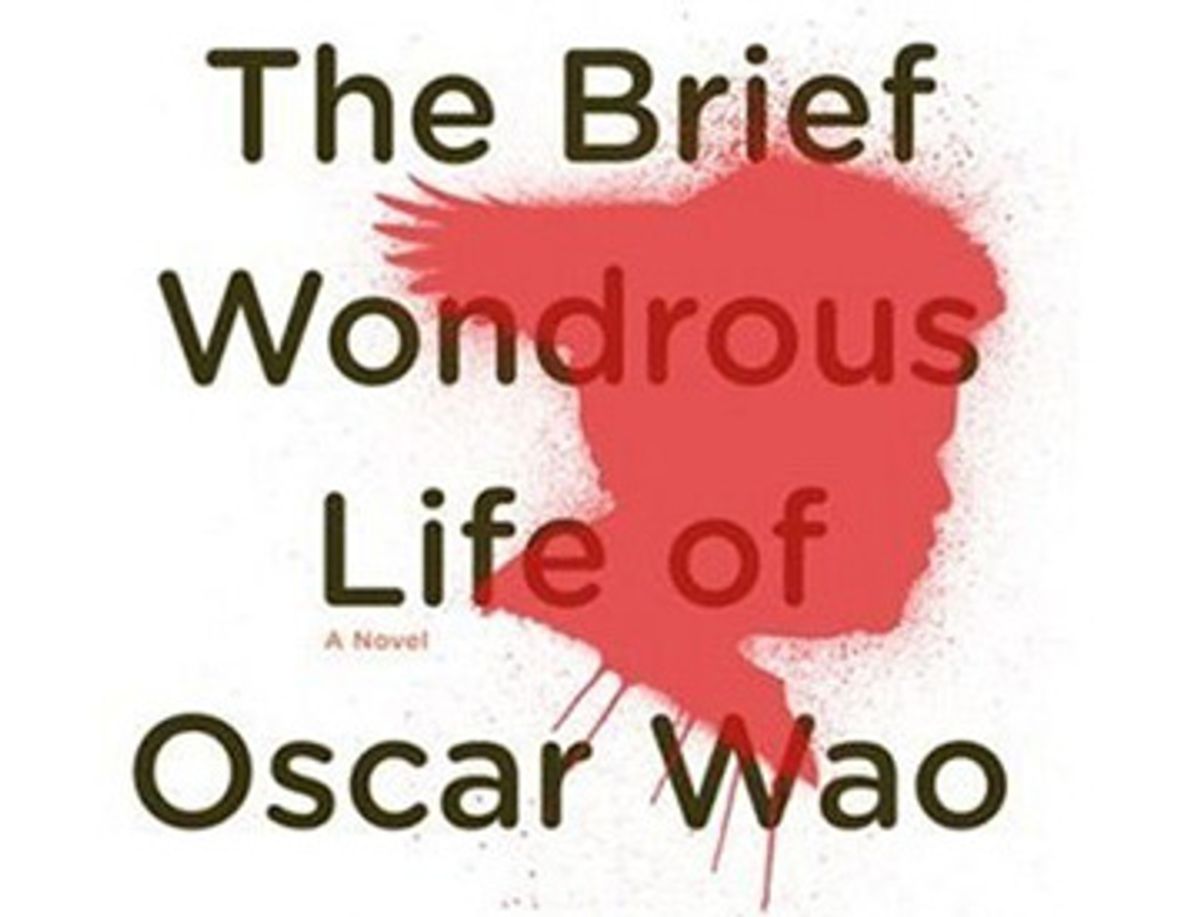 As a short story writer, Junot Díaz found the magic alchemy of subject and style fast -- maybe too fast. "Drown," his debut collection, was published in 1996 to explosive acclaim. This was back in the Clinton era, halcyon days for political correctness and diversity initiatives, when globalism was not yet tethered to terror in the American mind. "Drown" issued a yawp from the Jersey barrio, a shout-out from a homeboy who hadn't escaped and wasn't sure he wanted to -- and it soared past the gatekeepers into the pages of the New Yorker.

Eleven long years later, "Drown" has become that oxymoron, the contemporary classic, and its author a darling of MFA programs nationwide. By assaying the Dominican-American diaspora in lapel-grabbing prose, Díaz himself became something of an oxymoron: a Guggenheim Award winner who is de facto spokesperson for an entire immigrant community.

"It's like a f-----g knife in me," Díaz said in an interview last year of the intense pressure of producing a follow-up.

With his first novel, "The Brief Wondrous Life of Oscar Wao," Díaz extracts that knife and lets it all out. A relentless, capacious and sometimes spastic voice guides us through a saga spanning three generations and two nations. In its dogged humor and reflexive candor, the voice of the novel's narrator, Yunior, will immediately remind Díaz's readers of its earlier incarnation in "Drown": a punchy, hyperattentive adolescent looking for ways to get laid without looking lame. Now, years of wayward philandering have left Yunior longing for something authentic. The wisecracking vulnerability is still here in spades, but a remorseful tone colors everything in this novel, from the title to its final pages: "I wish I could say it worked out," Yunior reflects while recounting bad dreams, bad sex and an increasingly listless life. "It's not exactly what I dreamed of as a kid."

Even as he alternates between tales of the eponymous Oscar and those of Oscar's family -- sister Lola (who also narrates briefly), mother Beli and grandfather Abelard -- Yunior's voice dominates nearly every page, and the novel finally reads most powerfully as his own coming-of-middle-age story, with its minor keys of loss, self-betrayal and regret.

Oscar's story is set against the backdrop of the political histories of the Dominican Republic and its domineering neighbor to the north, onto whose soil he was transplanted as a young boy. Overweight, awkward, overly cerebral and uncool, he's a classic suburban Middle American nerd who, much like Yunior, happens to be a Dominican-American nerd in New Jersey, and thus subject to additional expectations of machismo. Oscar's obsession with "Star Trek," fantasy games, J.R.R. Tolkien, comics and Japanese animation mark him as an archetypal "otaku" (Japanese for über-geek, before the term and the anime became cool). His use of polysyllabic words and pretentious dialogue -- sitting next to an unrequited crush, Oscar feels "the heat off her body was vertiginous" -- not to mention his diligent hours of writing, suggests that Díaz is rendering a kind of portrait of the artist as a young, fat Latino.

Early chapters detailing Oscar's childhood, adolescence and traumatic college years are among the novel's strongest, especially as Yunior further insinuates himself into the plot, taking the geek under his wing in part to get closer to his sexy older sister Lola, "who could smile open a sun," but also out of sympathy and empathy: "In those days I had a dream of wanting to be a writer," Yunior confides, half hoping that Oscar might be able to teach him. As the two become college roommates, Oscar begins looking more like Yunior's nerdy doppelgänger. Where Yunior is fit ("I could bench 340 pounds), Oscar is slovenly, a hopeless trainee. Where Yunior is a cavalier Casanova on campus, Oscar "has the worst case of no Toto (pussy)-itis I'd ever seen." Yet Yunior knows Oscar intimately, decoding his moods, gestures and utterances as if delineating a shadow self.

When Oscar posts a greeting to visitors on the door of their room, Yunior identifies it as Elvish, a language from "Lord of the Rings," pleading to the reader in a parenthetical aside: "Please don't ask me how I knew this." As the two commence a short-lived exercise regimen, Yunior says: "I guess I knew more about him than I liked to admit."

Díaz wrings considerable humor out of Yunior's confessions to shades of uncoolness, but Oscar's true obsession and raison d'être are far more earthbound than his sci-fi fantasies: finding transcendent love. "Dude fell in love the way the rest of us fall asleep" -- and unlike most of the rest of us, Yunior adds, Oscar "would actually be heartbroken" when rejected, driven to madness by grief, loneliness and longing.

Oscar's emotional rawness and authenticity, his willingness to die for love, exasperate and then engross Yunior, and the novel traces the strands of Oscar's peculiar emotional DNA back through familial and national histories, in particular those of his mother, grandmother and grandfather, all three of whom suffer injustice and brutality at the hands of Rafael Leónidas Trujillo, the Dominican Republic's iron-fisted ruler from 1930 to 1961. The plot interweaves period chapters set in Santo Domingo with those in New Jersey and New York as if hoping to diagnose Oscar's addiction to love and Yunior's encroaching self-loathing via personal and political histories. Accounts of betrayals, beatings, tortures and other manifold perversions of humanity darken Dominican narratives filled with beautiful and strong women seeking love, and proud men crushed by their perceived failure to navigate a ruinous social system. "Nigger please," Díaz writes, apparently addressing us: "There were no papers, no civil rights groups, no opposition parties; there was only Trujillo."

In the Dominican Republic, yes, but in the republic of the novelist and his hero, there is also ... Tolkien. "Wao" is a smorgasbord of languages and a celebration of their diverse powers of meaning; Díaz uses Oscar's immersion in fantasy, with its linguistic precisions and elaborately imagined details, as a means of confronting, not escaping, the suffocating absurdities of history and passion. An overactive imagination, even one as tragically self-delusional as Oscar's will become, may be the only means of sustaining love's power in a world gone mad with corruption and iniquity. "What more scifi than the Santa Domingo?" Díaz asks. "What more fantasy than the Antilles?"

Díaz switches seamlessly between urban slang and quasi-Victorian archness. Mock-heroic phrasings invoke Homer; obscenities glide by like grace notes; and popular culture -- "This is your chance. If blue pill, continue. If red pill, return to the Matrix" -- provides a lexicon that somehow seems able to tame, if not contain, the screaming banality of daily life and the madness of the past. "Homeboy dominated Santo Domingo like it was his very own private Mordor," Díaz writes of Trujillo, and keeping a beautiful daughter from his raging lusts was "like keeping the ring from Sauron." (Mordor, of course, being the heavily fortified, inescapable region of evil in Tolkien's world and Sauron its evil inhabitant.)

That Díaz interweaves these references is ballsy and arresting: He's a geek-punk, and he doesn't care if you don't get it. The principal languages are, of course, English and Spanish, the latter of which features in passages that are not translated, and some of which, for this gringo at least, remain so -- effectively communicating the sense of permanent outsiderdom that is the province of the immigrant, the alienation from new and old.

"Wao" opens with a nod to "magic realism," the most hackneyed tradition associated with Latin American fiction in the United States, introducing "Fuku Americanus," or "the Curse and the Doom of the New World," brought into being by the European colonization of Hispaniola and, more specifically, Columbus' peregrinations circa 1492. But in Díaz's hands, the "magic" gives way to "realism" in the first few paragraphs. The broad strokes of his global curse suddenly become very personal: "It's perfectly fine if you don't believe [in this]," the narrator tells us. "In fact it's better than fine -- it's perfect. Because no matter what you believe, fuku believes in you." Not surprisingly, fuku is eventually reconfigured as "fuck you."

It's a fitting translation, for "Wao" is a novel of attitude trumping all. Díaz mixes it all up, betraying both a heroic faith in his readers to sort out the inconsistencies and no small degree of authorial arrogance -- even gleefully conflating narrator and author: "While I was finishing the novel, I posted the thread fuku on the DR1 forum," he writes in the opening pages. "The talkback blew the fuck up." Later, a brutal torture scene is compared to "one of those nightmare MLA panels: endless."

Yunior or Díaz? Sci-fi or history? Blue pill or red? It doesn't matter what you believe, Díaz seems to be saying. He believes in you.