The real reason Bush is withdrawing troops from Iraq

Bush says his troop drawdown is due to the success of the surge, but his own advisors -- including Gen. Petraeus -- have given a very different explanation. 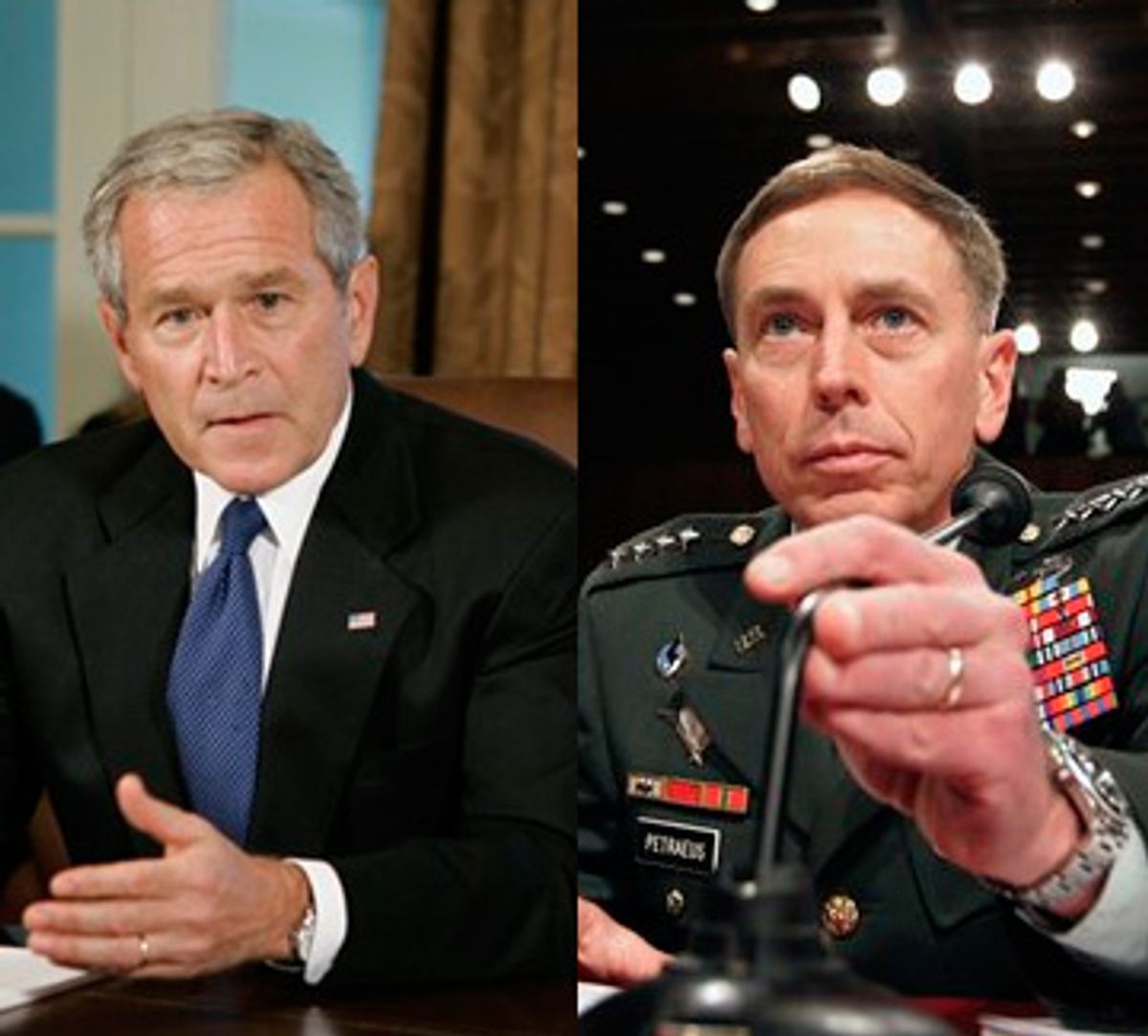 On Thursday night, President Bush will deliver a speech about the war in Iraq. Among the speech's major points will be an announcement that roughly 30,000 U.S. troops are coming home from Iraq. The first of those brigades will leave later this month, but the drawdown will reportedly begin in earnest in the spring of 2008.

According to a Thursday afternoon press release from the White House that contained excerpts from the speech, Bush will tell the nation:

"The premise of our strategy is that securing the Iraqi population is the foundation for all other progress ... The goal of the surge is to provide that security -- and to help prepare Iraqi forces to maintain it. As I will explain tonight, our success in meeting these objectives now allows us to begin bringing some of our troops home."

But that explanation doesn't jibe with the facts. No matter what the president or Gen. David Petraeus, the military point man of the surge, may now say about next spring's drawdown, it is not predicated on success. Bringing troops home is not a choice, but a fait accompli. It has been preordained since the beginning of the surge. In fact, the surge was always destined to end next spring because after that there will be no more troops with which to continue it, according to statements from Adm. Michael Mullen, the man Bush recently appointed as chairman of the military's Joint Chiefs of Staff, not to mention statements from Gen. Petraeus himself.

Many troops now in Iraq have already had their tours of duty extended to 15 months in order to participate in the surge. To continue the surge past next spring, the Pentagon would have to extend those tours even further. To do so would "break" the U.S. military, many experts have warned -- including Adm. Mullen. The administration has repeatedly indicated that those tours would not be extended.

Fred Kaplan, a reporter for Slate who once served as a foreign and defense policy advisor to former Rep. Les Aspin and has written extensively on the shortage of troops available for Iraq, said in an interview that the drawdown was destined to happen regardless of events on the ground in Iraq.

"The 15-month tours will be up," said Kaplan. "The Army was adamantly opposed to extending the tour beyond that [and] there has not been any further mobilization of the Reserves ... So, you know, there's no choice. They've got to come home without any replacement.

"If Bush and all decision-makers had suddenly gone comatose and things were just allowed to run their natural course, this is exactly what would have happened."

Larry Korb, a former assistant secretary of defense during the Reagan administration and former director of security studies at the Council of Foreign Relations who is now a senior fellow at the Center for American Progress, a liberal think tank, agrees.

"The reason that you've got to cut back is that the only way you've been able to get up to 160,000 given the fact that you also have close to 30,000 in Afghanistan is by extending the tours of people from 12 to 15 months," Korb says. "If you wanted to continue past next spring, next summer, you have to extend tours to 18 months or send people back [to Iraq] before they've had a year home ... [The administration has] said they won't do that."

Korb further points out that even during the wars in Vietnam and Korea, tours were not extended past 12 months; he believes the only way the surge could be continued without doing so, or without cutting soldiers' time back home, is to institute a draft.

Petraeus himself conceded that the surge had definite time limits long before he appeared on Capitol Hill to tout the surge's success earlier this week. A month and a half ago, on July 29, U.S. News' Paul Bedard reported that Petraeus "is telling surge troops that they will not be kept past their 15-month tours. That means the troop drawdown could begin in April, when the first troops in the surge will reach their 15th month on the ground. Officials say that all of the surge brigades reach their 15th month by August 2008."

Petraeus appeared the next day on ABC's "Good Morning America," where, in an interview with Diane Sawyer, he said, "We know that the surge has to come to an end ... General Odierno and I have -- are on the record telling our soldiers that we will not ask for any extension certainly beyond 15 months."

The next day, Adm. Mullen, then the nominee to become chairman of the Joint Chiefs of Staff, appeared before the Senate Armed Services Committee for hearings on his nomination. Mullen, whose nomination was approved by the Senate -- he will take his post as chairman of the JCS next month -- referenced the Petraeus interview and concurred with what Petraeus had said.

"General Petraeus said it yesterday in an interview," Mullen noted. "[T]here is a time element here."

Under questioning by Sen. Jack Reed, D-R.I., Mullen twice repeated the conclusion that the surge had to begin to end in April of 2008.

"You said ... you were going to do your utmost to maintain rotations no more than 12 to 15 months," Reed said to Mullen. "Effectively, that means, as you also suggest, by next April, regardless of the conditions on the ground, the surge will end, because we simply will not be able to put manpower on the ground unless we extend rotations.

"Is that a fair..." Reed continued, before Mullen interjected, according to a transcript of the hearing, "Yes, sir, that's fair."

Later in the hearing, Reed said to Mullen, "[T]his notion that we're going to have an unlimited opportunity to keep forces there at this level, that we're only going to take forces down based upon General Petraeus' suggestion that things are OK now is, I think, fully rebutted by the force structure. Is that an irrational..."