Bike activists face an uphill climb against Transportation Secretary Mary Peters, who claims bike paths are not transportation and are stealing tax money from bridges and roads. 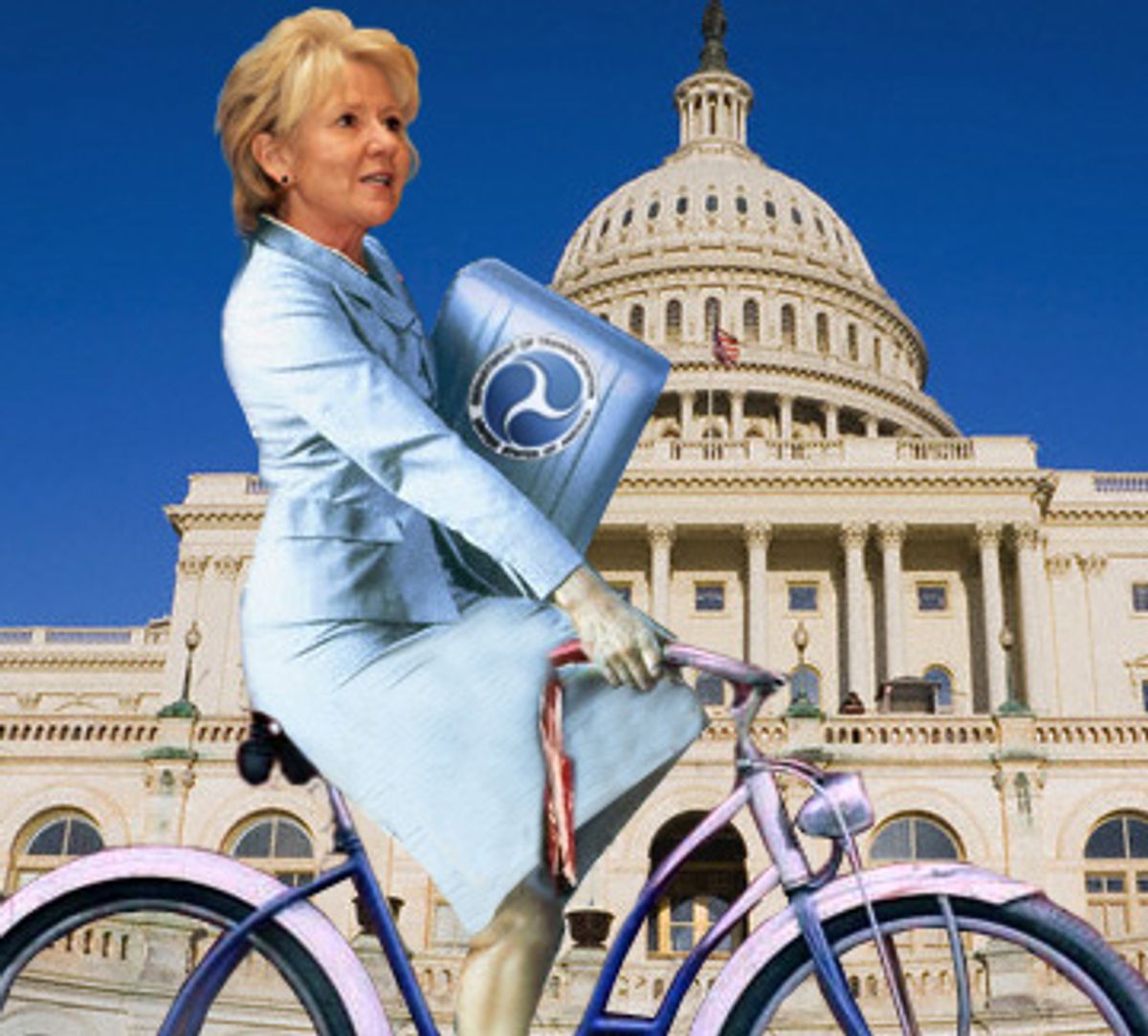 Imagine you're the federal official in the Bush administration charged with overseeing the nation's transportation infrastructure. A major bridge collapses on an interstate highway during rush hour, killing 13 people and injuring an additional 100. Whom to blame? How about the nation's bicyclists and pedestrians!

The Minneapolis bridge collapse on Aug. 1 led Secretary of Transportation Mary Peters to publicly reflect on federal transportation spending priorities and conclude that those greedy bicyclists and pedestrians, not to mention museumgoers and historic preservationists, hog too much of the billions of federal dollars raised by the gas tax, money that should go to pave highways and bridges. Better still, Peters, a 2006 Bush appointee, apparently doesn't see biking and walking paths as part of transportation infrastructure at all.

In an Aug. 15 appearance on PBS's "NewsHour With Jim Lehrer," Peters spoke against a proposal to raise gas taxes to shore up the nation's aging infrastructure. The real problem, the secretary argued, is that only 60 percent of the current money raised by gas taxes goes to highways and bridges. She conveniently neglected to mention that about 30 percent of the money goes to public transit. She then went on to blast congressional earmarks, which dedicate 10 percent of the gas tax to some 6,000 other projects around the country. "There are museums that are being built with that money, bike paths, trails, repairing lighthouses. Those are some of the kind of things that that money is being spent on, as opposed to our infrastructure," she said. The secretary added that projects like bike paths and trails "are really not transportation."

Peters' comments set off an eruption of blogging, e-mailing and letter-writing among bike riders and activists, incensed that no matter how many times they burn calories instead of fossil fuels with the words "One Less Car" or "We're Not Holding Up the Traffic, We Are the Traffic" plastered on their helmets, their pedal pushing is not taken seriously as a form of transportation by the honchos in Washington, D.C.

Bike paths are not infrastructure? "There are hundreds of thousands of people who ride to work, and millions who walk to work every day, and the idea [that] that isn't transportation is ludicrous," says Andy Clarke, executive director of the League of American Bicyclists, who has biked to work for almost 20 years on a path paid for with federal dollars. Clarke fired off an angry letter to Peters, and invited the 25,000 members of his organization around the country to do the same. "The guy in his Humvee taking his videos back to the video store isn't any more legitimate a trip than the guy on the Raleigh taking his videos back," says Andy Thornley, program director for the San Francisco Bicycle Coalition.

In fact, only about 1.5 percent of federal transportation dollars go to fund bike paths and walking trails. In the meantime, 10 percent of all U.S. trips to work, school and the store occur on bike or foot, and bicyclists and pedestrians account for about 12 percent of annual traffic fatalities, according to the Federal Highway Administration. "We represent a disproportionate share of the injuries, and we get a minuscule share of the funds," says Robert Raburn, executive director of the East Bay Bike Coalition in the San Francisco Bay Area, who calls the Peters' comments "outrageous." Plus, he notes, with problems like global warming, the obesity epidemic and energy independence, shouldn't the U.S. secretary of transportation be praising biking, not complaining about it?

What really drives cyclists around the bend is that while they're doing their part to burn less fossil fuel -- cue slogan: "No Iraqis Died to Fuel This Bike" -- they're getting grief for being expensive from a profligate administration. "War spending, tax cuts for the rich, and gas taxes are all big sources of funding. Bike spending is not," fumes Michael Bluejay, an Austin, Texas, bike activist, in an e-mail. "The few pennies we toss toward bike projects is not enough to fix our nation's bridges, not by a freaking long shot."

One of the many communities that benefit from federal dollars for bicyclists and pedestrians is the very one where the bridge collapsed. For the St. Paul, Minn., program Bike/Walk Twin Cities, administered by Transit for Livable Communities, $21.5 million of federal dough is being spent to create bike lanes, connect existing walking and biking trails with one another, and install signage to alert drivers of the presence of bicyclists and walkers. Despite the cold winters, Minneapolis is something of a biking Mecca, with 2.4 percent of all trips to work made by bike, significantly higher than the national average of 0.4 percent, according to Joan Pasiuk, program director of Bike/Walk Twin Cities.

It's hard to argue that walking paths and bike trails are robbing federal coffers when states can't even spend all the federal money they've received to repair bridges in the first place. In 2006, state departments of transportation sent back $1 billion in unspent bridge funds to the federal government, according to the Federal Highway Administration. "The fact that there is a billion dollars of bridge repair money sloshing around in the system not being spent suggests that it's not the fault of bike trails," says Clarke.

Congressional Democrats agree. "It's a red herring to point to bike paths and even imply that if we didn't build another bike path we'd have all the money we need to fix our highways and bridges," says Jim Berard, communications director for the House Committee on Transportation and Infrastructure. "You can't build very many bridges with the amount of money that you would save if you didn't build any bike paths."

So why is Peters suddenly taking on bikes and pedestrians? Her comments are especially odd since she sang the praises of bikes as transportation in a speech at the National Bike Summit in Washington, in March 2002. Has she simply forgotten the glory of two wheels? One theory: Peters is on a campaign to quash the idea of raising the gas tax, as she editorialized recently in the Washington Post. A key proponent of raising the gas tax to fund bridge restorations in the wake of the Minneapolis bridge collapse is Democratic Rep. Jim Oberstar of Minnesota, who has advocated for bike and pedestrian paths in his district. By putting a culture-war spin on the bridge collapse, Peters is hoping to run his gas tax proposal off the road.

Does Peters herself buy this theory? Does she really think that bike paths do not qualify as transportation infrastructure? Why does she say that things like bike paths steal money from bridge repairs when states have more than enough money to fix bridges? The secretary would not respond, but Jennifer Hing, a spokesperson for the Department of Transportation's Office of Public Affairs in the Office of the Secretary, would. She answered all the specific questions with one resoundingly uninformative e-mail: "The federal government should set high standards for and invest in the ongoing safety, reliability and interconnection of the nation's transportation network. State and local communities should have the flexibility to then set local transportation priorities."

For their part, cyclists have been weaving through political land mines for decades. In the perennial struggle to gain public support for bike paths, they remain philosophical. Says Thornley of the San Francisco Bicycle Coalition: "Before there were automobiles, and after there will be automobiles, there will be bicycles moving people around for transportation."