Jodie Foster pulls no punches as a latter-day Travis Bickle, but the film's not as brave as it thinks it is. 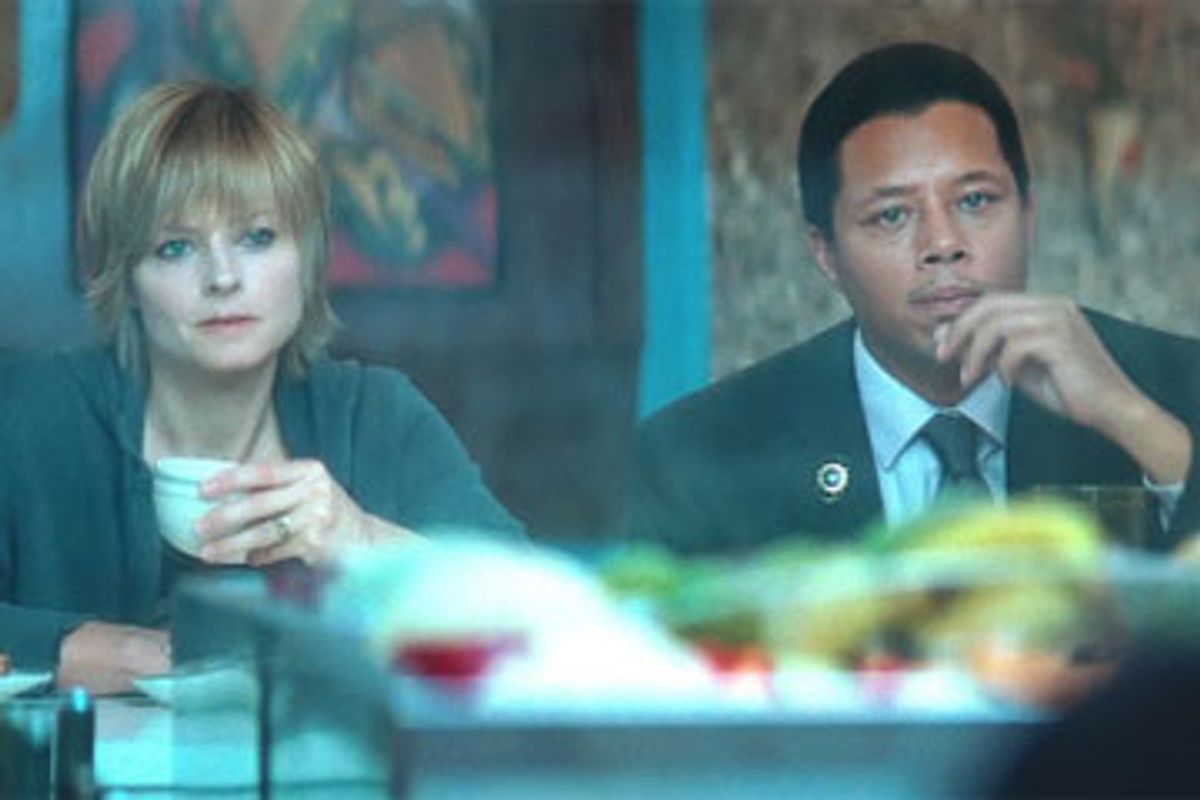 In Neil Jordan's "The Brave One," Jodie Foster plays Erica Bain, a radio-show host who captures the sounds of New York and weaves them into observant, seductive narratives that celebrate her love for the city, in all its cranky, wonderful glory. Then one day, she and her fiancé, David (Naveen Andrews), are brutally attacked in Central Park. She survives the attack, but David doesn't, and when she tries to put her life back together, she finds herself frozen with fear. The city she once loved has turned against her, and impulsively, she buys an illegal handgun, perhaps for the same reason that little boys often gravitate toward toy guns even when their parents do everything to keep them out of reach: Having a weapon gives her a feeling of power and control in an uncontrollable world.

Erica doesn't just use that gun for protection; she becomes a vigilante, coming face-to-face with her own capacity for violence as she takes the law into her own hands to protect the city's innocents from bullies. "The Brave One" is clearly intended as a meditation on the horrific deeds that decent human beings are capable of; it also dances nimbly around the question of whether vigilantism is ever justified, although it doesn't present any easy answers -- in fact, its ending pretty much opts out of the whole question.

So even though the "The Brave One" -- its screenplay is by Roderick Taylor and Bruce A. Taylor -- purports to raise some thorny questions, it isn't as deep as Jordan seems to think it is. The movie repeatedly tries to spell out its message in obvious dialogue, in lines like, "Anyone can be a killer." (At times, Foster could be playing a tweaked version of Travis Bickle in "Taxi Driver.") But mostly, the movie feels like little more than a standard-issue cop thriller. And although we may feel a great deal of sympathy for Erica herself -- largely because of the sincerity and subtle textures of Foster's performance -- it's not always easy to sympathize with her actions. That's probably supposed to be the point: Erica is committing deeds we think we'd never be capable of ourselves. Even so, most of the situations she finds herself in seem forced and unreal, concocted so the movie can give us big ideas to ponder.

But if "The Brave One" ends up being a somewhat confused picture, it nonetheless offers us some interesting, well-observed details. Erica eventually meets and cautiously befriends the detective, Sean Mercer (Terrence Howard), who's investigating the crimes she's become entangled with, and the scenes between these two characters are so nicely played that they keep us engaged: Howard, a casually elegant actor, plays Sean as a guy who's seen it all (and, in his personal life, been through it all) but who still has to keep a cool head in the face of the horrors around him. He makes a good counterpart to Foster's jittery Erica, who appears to be holding everything together but is really on the verge of falling apart. The scenes between the two actors feel alive and intimate, partly because they're relatively straightforward: We feel we're watching two alienated people make a connection, not a point, and the relative simplicity of their encounters is refreshing.

Foster's performance is grave and intense: In an early scene, when a duo of cops are quizzing her about the attack, she stares back at them through eyes that look to be about 100 years old. In another sequence, she returns to her apartment -- she's been hospitalized for several weeks, part of which was spent in a coma. (She even missed David's funeral service.) She faces the dried-up flowers on the table, the half-made bed, and we can see how these relics of her former life are chipping away at whatever is left of her spirit. It's a quietly devastating sequence.

Jordan -- who was born in Dublin -- also has a surprisingly strong grasp of what living in New York is like, and he translates it beautifully onto the screen. Erica and David have a cranky neighbor -- they joke about her surliness; it's a bond between them -- but, as is usually the case with people who annoy us deeply, there's more to her than we see at first. The movie understands the way New Yorkers sometimes look after one another even when they're pretending they couldn't care less. And the movie's violence -- particularly the attack sequence -- is difficult to watch, but deftly handled. There's a lot to admire in "The Brave One." It just doesn't cut as deeply as it needs to.