Could 2008 be the year that Democrats finally admit an old sweetheart is never coming back, and stop pandering to the white male voter? 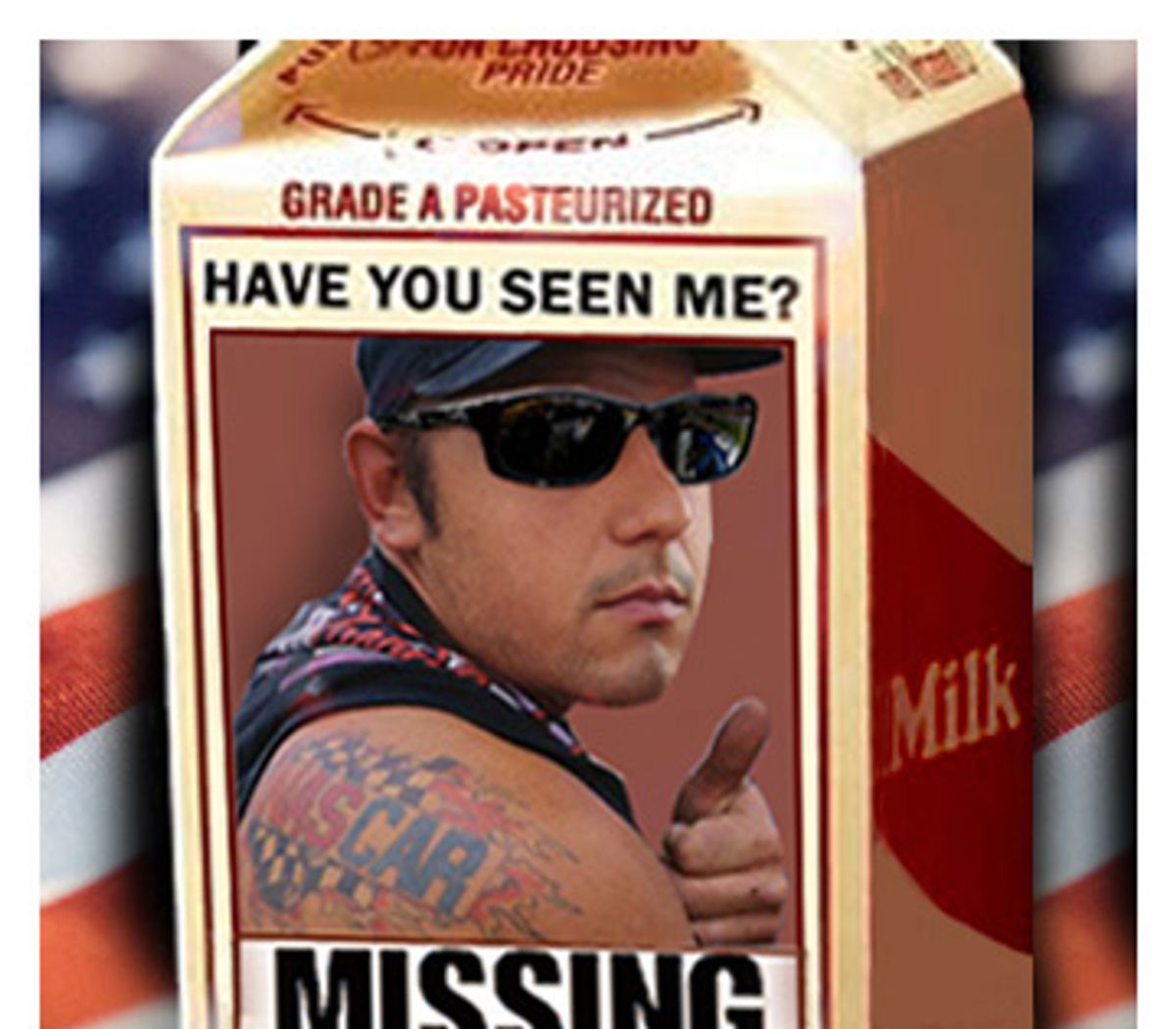 Those who have been closely following the politics of the Democratic primaries may have noticed that someone is missing -- and I'm not referring to Bob Shrum, the Rev. Al Sharpton or an as-yet-undiscovered "Gravel Girl."

I'm talking about the white male voter, or at least a certain long-coveted variety thereof. He is variously known as "NASCAR dad" -- that shirt-sleeved, straight-talkin', these-colors-don't-run fella who votes his cultural values above all else -- or "Bubba," as Steve Jarding and Dave "Mudcat" Saunders affectionately call him in their book, "Foxes in the Henhouse." Start looking on milk cartons for Bubba because he has vanished, and not a moment too soon: The Democratic obsession with the down-home, blue-collar, white male voter, that heartbreaker who crossed the aisle to the Republicans many decades ago, may finally be coming to a merciful end.

The simplest explanation for Bubba's absence to date is that none of the 2008 Democratic presidential contenders provides an obvious home for his vote. Despite accusations that Hillary Clinton is prone to dropping her "g's" when talking to rural or Southern audiences, it's difficult to imagine the former first lady making overt appeals to a group that regards her with something verging on rabid disgust. Barack Obama? The former Chicago street activist is not easily mistaken for a good ole boy. Ditto for Christopher Dodd, Mike Gravel, Dennis Kucinich and Bill Richardson.

But the underlying reason may be demographics. In 1952, according to calculations performed by Emory University political scientist Alan Abramowitz for Salon, white males were nearly half the American electorate. Thanks to the recent growth in the Latino population, however, the white male share is now dropping about a percentage point a year, accelerating a decline that began with the increased enfranchisement of African-Americans in the civil rights era. In next year's election, white males may account for fewer than one out of three voters. Bubba is no longer a kingmaker.

In the current primary season, only Delaware Sen. Joe Biden has bothered to make so much as a feint toward the Bubba vote, with an absurd analogy between his home state and the South. In January, when pressed by "Fox News Sunday" host Chris Wallace on how a "Northeastern liberal like Joe Biden" hoped to compete in South Carolina, the senator responded: "You don't know my state. My state was a slave state ... My state is anything [but] a Northeast liberal state." Biden's comment left Southern politics expert Merle Black scratching his head. "That's just really quite bizarre," the Emory professor told the Wilmington News Journal. "That's not how you appeal to Southern voters."

But the candidacy that most testifies to Bubba's declining stock is that of former North Carolina Sen. John Edwards.

At first blush, Edwards, the Southern populist nonpareil, seems ideally situated to corner the market on working-class, white male voters. But aside from his homegrown accent, Edwards displays none of the affectations or semiotics that might once have signaled his intent to woo them. There are no Lamar Alexander-style flannel shirts; there is no sponsorship, à la Florida Sen. Bob Graham four years ago, of a NASCAR racing team. Instead, Edwards -- whose father worked in a textile mill -- hammers the issue of economic justice largely, if not completely, without overt cultural appeals. If he were a character from Southern literature, the former trial lawyer would be Atticus Finch of "To Kill a Mockingbird," not Henry Drummond of "Inherit the Wind."

Tens of millions of white men still vote Democratic, of course, and not just Prius drivers, eggheads, grunge-band leaders or Warren Beatty's Hollywood buddies. Most notably, working-class white men who are current or retired union members cast their votes for Democrats, in the stubborn belief that only Democrats will protect and promote their economic interests. "The 2004 CNN exit poll data shows that [John] Kerry lost white males by 31 points if they weren't in a union, but won them by seven points if they were -- a 38-point difference," says Mike Podhorzer, deputy political director of the AFL-CIO. "It's no accident -- union members understand that their votes make a difference, for their wages, their healthcare and their pensions. If, as they say, 'there's something the matter with Kansas,' there's nothing the matter with union members."

In 2004, according to New York Times exit polls, Democrat Kerry won 38 percent of the total white male vote, confirming a familiar pattern. Kerry's share was basically the same that every Democratic presidential candidate has received since Michael Dukakis. In the four elections between 1988 and 2000, in fact, using New York Times exit poll results, the Democratic nominee won 36 percent, 37 percent, 38 percent and 36 percent, respectively, of votes cast by white men. Because white men cast between 33 and 36 percent of all votes in 2004, that means a mere 12 to 13 percentage points of Kerry's 48 percent nationally came from white men -- about one vote in four. Nevertheless, and despite running against an incumbent in the first post-Sept. 11 presidential election, Kerry still came within one state of winning the Electoral College. Four years earlier, Al Gore also came within one state of reaching the magical 270 electors, and actually won the popular vote nationally -- while, like Kerry, receiving only about one-fourth of his support from white men.

What about Super-Bubba himself, Bill Clinton? By siphoning off 22 percent of the white male vote in 1992, Ross Perot would appear to have prevented Clinton from breaking the Democrats' pattern. But more revealing is the fact that when in 1996 Perot's support among white men fell by half, to 11 percent, Clinton's support improved by a meager 1 percent. The truth is that Clinton was no more dependent on white male votes for his two wins than Gore and Kerry were penalized for garnering the same level of support from these voters in their two defeats.

Yet centrist Democrats continue to urge the party to find new ways to lure white male voters back into the fold. Bill Galston, former domestic policy advisor to Bill Clinton and one of Washington's sharpest analysts, is a proponent of a Democratic reinvestment in white male voters. "Today, white males form about 39 percent of the electorate," Galston wrote in Blueprint, the monthly magazine of the Democratic Leadership Council, in the summer following the 2000 election. "The Republican margin of 20 to 25 percentage points among white males thus translates into an edge of between 8 percent and 10 percent of the entire electorate. By comparison, African-Americans form 10 percent of the electorate, and the Democrats' 80-point margin in this group translates into an eight-percent edge in the electorate as a whole. Republican strength among white men more than offsets Democrats' dominance of the African-American vote."

That's one way to look at it. But Galston's own math reveals an obvious alternative view, namely, that Democrats are able to neutralize their white male voter problem with votes from African-Americans -- even though the latter group is only about one-third the size of the former. While Galston was right in 2000 about the "more than offsets" effect of white male votes relative to black votes, by 2004 the share of all votes cast by white men had shrunk by 3 percent while the share cast by African-American voters has increased by 2 percent; today, the black vote fully compensates for the Democrats' deficit among white men.

The real story, however, is that the white male share of the electorate continues to decline. In 1976, Jimmy Carter beat Gerald Ford while garnering what by today's standards would be an eye-popping 47 percent of the white male vote. But in 1976, according to Abramowitz's math, white non-Hispanic males were 39 percent of the American electorate. (Abramowitz's figures, based on numbers from American National Election Studies, are slightly lower than those produced by exit polling, which may oversample white males.) The white male share of the electorate, which had fallen seven percentage points between 1952 and 1976, then stayed roughly constant for 20 years, but after 1996 began dropping again. It fell to 36 percent in 2000 and 33.1 percent in 2004, and it is still falling.

The remainder of the electorate, meanwhile, is composed of white women, among whom Democrats are competitive, and other minority groups that lean Democratic. Kerry won Hispanics, Asian-Americans and Native Americans by margins of at least 20 points in 2004, and all are growing as a share of the total electorate.

Meanwhile, as Biden's blunder proves, there are risks to trying to make phony cultural connections with working-class white men, most notably perpetuating the perception of Democrats as a party that is uncomfortable in its skin. With few if any votes to be gained -- and plenty of votes to be lost for being inauthentic -- Democrats finally seem to realize that cultural contortionism in the pursuit of Bubba produces little more than smiles on the faces of Republican consultants like Ayres.