What happens to private contractors who kill Iraqis? Maybe nothing

Blackwater USA employees are accused of killing several civilians, but there might not be anyone with the authority to prosecute them. 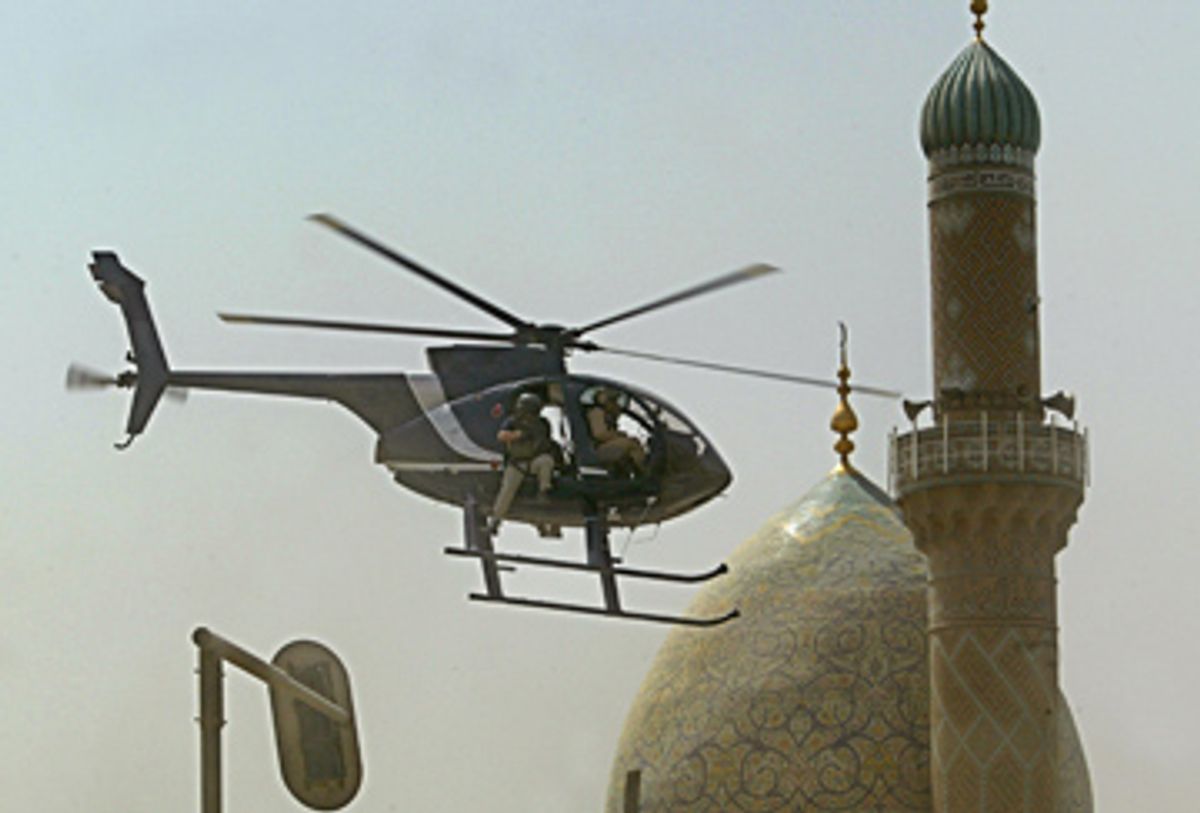 An incident this past weekend in which employees of Blackwater USA, a private security firm that has become controversial for its extensive role in the war in Iraq, allegedly opened fire on and killed several Iraqis seems to be the last straw for Iraqi tolerance of the company. Iraqi government officials have promised action, including but not limited to the suspension or outright revocation of the company's license to operate in Iraq.

But pulling Blackwater's license may be all the Iraqis can do. Should any Iraqis ever seek redress for the deaths of the civilians in a criminal court, they will be out of luck. Because of an order promulgated by the Coalition Provisional Authority, the now-defunct American occupation government, there appears to be almost no chance that the contractors involved would be, or could be, successfully prosecuted in any court in Iraq. CPA Order 17 says private contractors working for the U.S. or coalition governments in Iraq are not subject to Iraqi law. Should any attempt be made to prosecute Blackwater in the United States, meanwhile, it's not clear what law, if any, applies.

"Blackwater and all these other contractors are beyond the reach of the justice process in Iraq. They can not be held to account," says Scott Horton, who chairs the International Law Committee at the New York City Bar Association. "There is nothing [the Iraqi government] can do that gives them the right to punish someone for misbehaving or doing anything else."

L. Paul Bremer, then the head of the Coalition Provisional Authority, the initial occupation government of Iraq, issued CPA Order 17 in June 2004, the day before the CPA ceased to exist. "Contractors," it says, "shall not be subject to Iraqi laws or regulations in matters relating to the terms and conditions of their Contracts."

The Iraqi government has contested the continued application of this order, but because of restraints that inhibit the Iraqi government from changing or revoking CPA orders, Order 17 technically still has legal force in Iraq. Furthermore, as Peter W. Singer, an expert on private security contractors who is a senior fellow at the center-left Brookings Institute, points out, in order for the Iraqi government to prosecute those contractors, the U.S. government would have to accede to it. And that, Singer says, poses a whole new set of thorny questions.

"The question for the U.S. is whether it will hand over its citizens or contractors to an Iraqi court, particularly an Iraqi court that's going to try and make a political point out of this," Singer says. If the United States is not willing to do so because of concerns that the trial will be politically motivated, he adds, there's a new question at hand. "If we really say that openly, doesn't that defeat everything we heard in the Kabuki play last week with [General David] Petraeus and [U.S. Ambassador Ryan] Crocker, that everything was going great? What happens if we say, 'No, we don't think you can deal with this fairly in your justice system?'"

That leaves international and U.S. law. But international law is probably out. Even before the Bush administration, the United States had established a precedent of rejecting the jurisdiction of international courts. The United States is not, for example, a member of the International Criminal Court in the Hague. (In 2005, the government of Iraq announced its decision to join the court; it reversed that decision two weeks later.)

U.S. law, meanwhile, is hopelessly murky. More so than in any of America's previous conflicts, contractors are an integral part of the U.S. effort in Iraq, providing logistical support and performing essential functions that were once the province of the official military. There are currently at least 180,000 in Iraq, more than the total number of U.S. troops. But the introduction of private contractors into Iraq was not accompanied by a definitive legal construct specifying potential consequences for alleged criminal acts. Various members of Congress are now attempting to clarify the laws that might apply to contractors. In the meantime, experts who spoke with Salon say there's little clarity on what law applies to contractors like the ones involved in Sunday's incident, and the Bush administration has shown little desire to take action against contractor malfeasance.

In June of this year, the Congressional Research Service -- a nonpartisan research arm of Congress -- issued a report on private security contractors in Iraq that included a discussion of their legal status. The report's authors gave a bleak picture of prospects for prosecution under U.S. law, referring at one point to "the U.S. government's practical inability to discipline errant contract employees."

The problem is that no one seems quite sure what law, if any, would apply to security firm contractors, and any potential applications are untested and would be vigorously challenged. Uniformed military personnel are subject to the Uniform Code of Military Justice, and "persons serving with or accompanying an armed force in the field" are technically subject as well. But the application of the UCMJ to these contractors would undoubtedly be challenged on constitutional grounds, and even if it were to hold up in court, the CRS report noted a particular irony: At least one court has held that "a serviceman who had been discharged was no longer amenable to court-martial." In other words, Blackwater could protect its employees from the UCMJ simply by firing them.

Another potential avenue for prosecution is the Military Extraterritorial Jurisdiction Act of 2000, or MEJA, which applies to civilians. Originally written only to cover civilian employees of the Department of Defense and contractors working for the DOD, it was changed after the Abu Ghraib scandal, which involved contractors not working for DOD, to cover persons "employed by or accompanying the Armed Forces outside the United States." But even that definition might be too narrow to apply to the Blackwater employees in question. Those employees, State Department spokesman Sean McCormack confirmed in an interview with Salon, work for the State Department, not the DOD. "[They] report to our diplomatic security office in Baghdad."

Horton says he believes that "Blackwater is preparing to make the argument, if they ever get in the crosshairs of this, that they are there with a Department of State diplomatic contract and, therefore, MEJA doesn't apply."

Rep. David Price, D-N.C., is the sponsor of a law that attempts to deal with this loophole, the Transparency and Accountability in Military and Security Contracting Act of 2007.

"I just want to know whether it can and will be prosecuted if prosecution is warranted, and I don't think we have the clear legislative coverage of this that we should," Price said in an interview Monday. "If the contractors were under a DOD contract, that wouldn't be the question so much as whether the administration's doing its job pressing forward, but here you do have a real question about whether it has the authority in the first place."

Singer concurs. "There's a lot of stuff that could be done. It's just there's no easy answers," he says. "You could use them as a test case for UCMJ. You could hand them over to the Iraqis. President Bush says it's a functioning democracy. You could try to test out MEJA on them. You could investigate it and find out that actually it was a rightful shooting. There's lots of coulds, but there's no silver-bullet solution. We've painted ourselves in a corner."

Back in Baghdad, the Iraqis may not have the power to enforce the one action they've taken so far, the simple revocation of Blackwater's license. A spokesman for Iraq's Interior Ministry, Brig. Gen. Abdul Kareem Khalaf, told reporters Monday: "We have revoked Blackwater's license to operate in Iraq. As of now they are not allowed to operate anywhere in the Republic of Iraq. The investigation is ongoing, and all those responsible for Sunday's killing will be referred to Iraqi justice."

But it's not clear that Blackwater even has a license to revoke. Speculation abounded on Monday that it did not. On June 16, the Washington Post reported that "Blackwater USA ... [has] not applied, U.S. and Iraqi officials said. Blackwater said that it obtained a one-year license in 2005 but that shifting Iraqi government policy has impeded its attempts to renew."

Lawrence T. Peter, the director of the Private Security Company Association of Iraq, an industry trade group, told the Post on Monday that Blackwater did have a license. He seems to be contradicted by his own organization's Web site, however, which lists Blackwater as in the process of obtaining one. Salon contacted Peter to ask whether Blackwater was licensed. He did not answer the question, but a spokesman did forward a statement emphasizing that members of his trade group "pride themselves" on abiding by the "Rules for Use of Force" in effect.

By Monday afternoon, Iraqi officials seemed to be backing away from their earlier statements, making their pronouncements about Blackwater's license much less definitive. Time magazine reported that "a senior Iraqi official ... said that prime minister Maliki is expected to discuss the episode at a cabinet session scheduled for Tuesday and that, as far as the license being permanently revoked, 'it's not a done deal yet.'"