By someone who is not Edward Klein 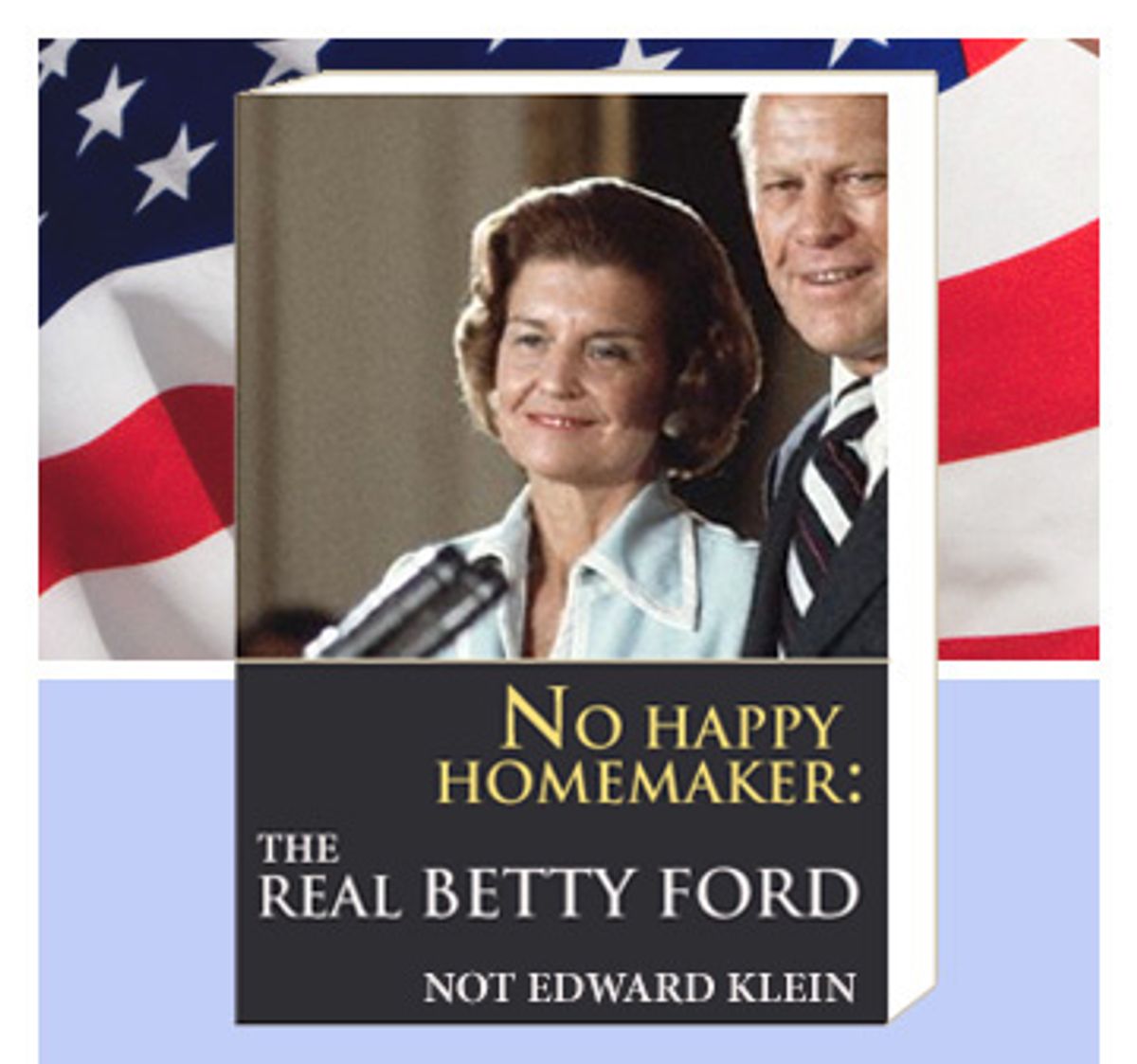 Edward Klein's new biography of CBS News anchor Katie Couric, "Katie: The Real Story," is the latest entry in a unique and controversial oeuvre. In a series of biographies, Klein has painted various famous females -- Hillary Clinton, Carolyn Bessette Kennedy and Jackie Kennedy -- matching shades of bitch. Klein's subjects often turn out to be grasping harpies who aren't above using their lady parts to beat the competition. The Klein approach to Understanding Important Women is encapsulated in the title of his 2005 biography of Clinton, "The Truth About Hillary: What She Knew, When She Knew It, and How Far She'll Go to Become President." In his newest profile, Katie Couric is sleeping her way to success -- and wrecking a home -- before Page 10. Through an anonymous source, Salon recently received the opening pages of Klein's next three books. You read them here first. -- ed.

Her mother had never liked Betty's husband Bill. But that had been, the new Mrs. Warren suspected, one of the reasons that she'd married him.

She'd only been back in Grand Rapids a short while before she'd seen Bill again -- Bill, who'd taken her to her first dance when she was 12, when she was gangly and boyish, years before she'd gone off to the glamorous brand-new women's college in Bennington, and then gone down to New York to dance with Martha Graham.

None of her time in the Gamma Delta Tau service sorority or the Junior League back in Michigan had prepared her in the slightest for the rough and tumble of New York City in 1938.

"She couldn't make it as a dancer," recalled a Bennington schoolmate who was clearly not a friend. "She was just a failure in the big city."

That was true. She had been just a big swan in a tiny pond back home.

She told herself she'd come back home to Grand Rapids as a promise to her domineering mother. Living with her mother again -- the woman who'd made her wear white gloves while shopping? Really she'd come back because she just couldn't cut the mustard.

Bill Warren had been her attempt to regroup, to start over. But now she would be a divorced failure, too.

Bill didn't treat her well -- it started nearly right after their marriage in April of 1942. He didn't have enough money. They'd even got married in her mother's home. But it wouldn't have looked right if she'd left him so soon, after only a couple of years of marriage. What would people say?

Plus he'd fallen into that coma.

So she waited another few years, nursing him, surely with resentment.

"I took a dollar in settlement and it was finished," Betty would write later, with what must have been her customary mercenary tone.

And so, with her age on her mind, she moved on fast. Right away, she slipped out for assignations with a Navy man named Jerry Ford. She met with him in "an out of the way bar," in August of 1947, a full month before she was even a divorced woman.

She knew right away that her long personal nightmare was over.

"She had to handle Jerry Ford absolutely right," recalled a friend of a cousin of the wife of the Episcopalian minister who conducted the wedding. "After all, she was 29 -- a divorced, desperate former dancer."

She got Ford, a former footballing lummox, to propose to her just a short while later, in February of 1948.

Ford had been born Leslie Lynch King Jr., something he hadn't known himself until he was an adult. Discovering the secret of his adoption had nearly shattered him -- and in this vulnerable state, he was the perfect choice, just waiting for a woman with a steely grip to arrive and bend him to her will.

This was, she saw, a man who could go all the way in his new career in politics. A guy's guy, a temperate man, and those two years on the USS Monterey? Perfect material for molding.

She spurred his workaholism on the campaign trail as a young politician -- he left their rehearsal dinner to go campaigning.

"He was even late for their wedding," recalled one apparently still-bitter attendee.

But the new Mrs. Ford didn't utter a word in protest. She knew he could go all the way -- maybe even to Congress. He just had to.

But even she, in almost desperately grasping dreams of power, could barely imagine that someday she would be anointed the first lady of the United States of America.

"Moyna McGill was a wild Irish woman," recalled a faded former starlet who asked not to be named because she couldn't remember any longer exactly whom she might offend. "She threw the best parties in Laurel Canyon."

And the expat English set, bored by the Californians, always showed up thirsty and full of gossip.

Belfast-born Moyna had adapted fast to her adopted homeland. It had been just a few years since the theater actress had fled London and the war and then sneaked into the U.S. from Canada. What's more, she learned to play the Hollywood game fast.

Likewise did her teenage daughter, Angela Lansbury. Glassy-eyed with wonder at the stars that orbited so close, she would do anything to join their celestial dance.

"Oh, she was a looker," the starlet said. "And hungry. She'd have done anything to swing in Hollywood -- and she certainly did."

The 19-year-old put herself before an older man at one of these parties of her mother's. He was witty and handsome -- but more importantly, he knew simply everyone, and how to get to know those he didn't yet.

Richard Cromwell, then 35, had worked with Bette Davis in "Jezebel." He was a master social climber who painted the likes of Joan Crawford and Greta Garbo and then sold them the paintings.

That wasn't his only source of income apart from his studio contract. He was also on the payroll for Lucky Strike cigarettes.

Richard also spent "private time" with Howard Hughes. And he had rented his house out to Cole Porter while he was off in World War II. He also partied with George Cukor.

So though he was clearly as homosexual as any man could be, and not far from twice her age, young, hungry Angela became his wife. Whether he was homosexual or not, she knew he could deliver all of Hollywood to her on a gleaming crystal platter.

"She was the Judy Garland to his Vincente Minnelli!" said a homosexual fan of "Murder She Wrote." "Except Angela and Richard only made it for a fraction of the scant years that Judy stuck it out."

Indeed. It only took nine months for her to get everything she wanted from Richard, and then she tossed him aside. The divorce was easy to get.

She had learned this lesson just a few years earlier, when her sister Isolde married Peter Ustinov, then a rising young actor.

Although perhaps she learned it from her mother.

After Angela's father died, when the girl was 9, her mother's "prospects were not good," as Angela would later recall. So her mother showed her daughters how it was done: She met a wealthy man who rented for them a large house in Hempstead.

Angela turned 14 in 1939, and there may have been blackouts back in London, but, thanks to her mother's scheming, a tutor still came to her house to teach history, English and French.

Angela claims she had never thought of acting. In junior school, she had put on the pants and played Bluebeard, and "brought down the house," as she immodestly recollected.

But though she never acted again in school, still she enrolled in the Webber Douglas School of Dramatic Art in London. She was unimaginative enough to perform a scene from "Romeo and Juliet" for her audition.

But that fateful day came when scheming mother and her young ones heard on the radio that Hitler had gone into Poland.

And so, unwilling to stay and help their country, Moyna McGill, having ditched the wealthy benefactor, picked up young Angela and her twin brothers and fled England for Montreal on the Duchess of Atholl in 1940.

That ship would be torpedoed and sunk by a submarine in 1942.

But young Angela could not be.

The adventuress-nun had just 10 short months to snare her man.

The novitiate Maria Kutschera had been hired for just that amount of time to tutor a schoolgirl recovering from scarlet fever. The girl's father was an Austrian former naval captain named Georg Ludwig Trapp.

"He was quite the catch -- only widowed four years, with a fine full mustache and such a lovely house!" recalled a nun from Maria's convent, who spoke on the condition of anonymity because she believed that Jesus would be angry with her.

And so Maria tutored her fingers to the bone. There were six other children in the house, and she alternately charmed and tortured them in service of her greater goal: a ticket out of that dreary old Roman Catholic convent.

In truth, she didn't much like the old submarine commander. "Half his life had died with the Navy," the opportunist nun would recall later. "Of the other half, most seemed to be buried with Agathe."

Agathe was his first wife, the mother of his seven sunny little children, and, most importantly, she'd been immensely wealthy.

Maria was, indeed, a stony woman, raised by a cruel uncle in Vienna. Years later, little Maria, the girl the nun had been hired to tutor, would recall that her soon-to-be stepmother "had a terrible temper ... And from one moment to the next, you didn't know what hit her. We were not used to this."

Despite these brutal flaws of character, she met her deadline. She and Commander Von Trapp were married the very next year, in November of 1927.

But her happy ending had a sad postscript. She bore him two children quickly -- and then, in 1935, the Austrian banks began to fail, taking with them all their money.

"She did what any one of us would do," said a former local Nazi official: "She put the children to work."

And so the tutor turned stepmother began a punishing schedule of teaching madrigals and rounds. The children sang until their voices were raw. Her steely discipline, forged in the undoubtedly Sapphic cruelty of the convent, allowed the family to win the top prize of the Salzburg Music Festival in 1936.

From there, it was just a hop and a skip to America. There, the children fled the Von Trapp Family Singers one by one, nearly as soon as they could.

Maria kept the group together using non-family members as long as she could -- using only her "iron will," as a U.S. government archivist would put it later.

After all, it was all she had.

Any resemblance between the people depicted in these passages and real individuals alive or dead is purely coincidental.

By someone who is not Edward Klein

MORE FROM someone who is not Edward Klein