A crash in Thailand raises questions about wind shear, aging planes and the safety of budget airlines. 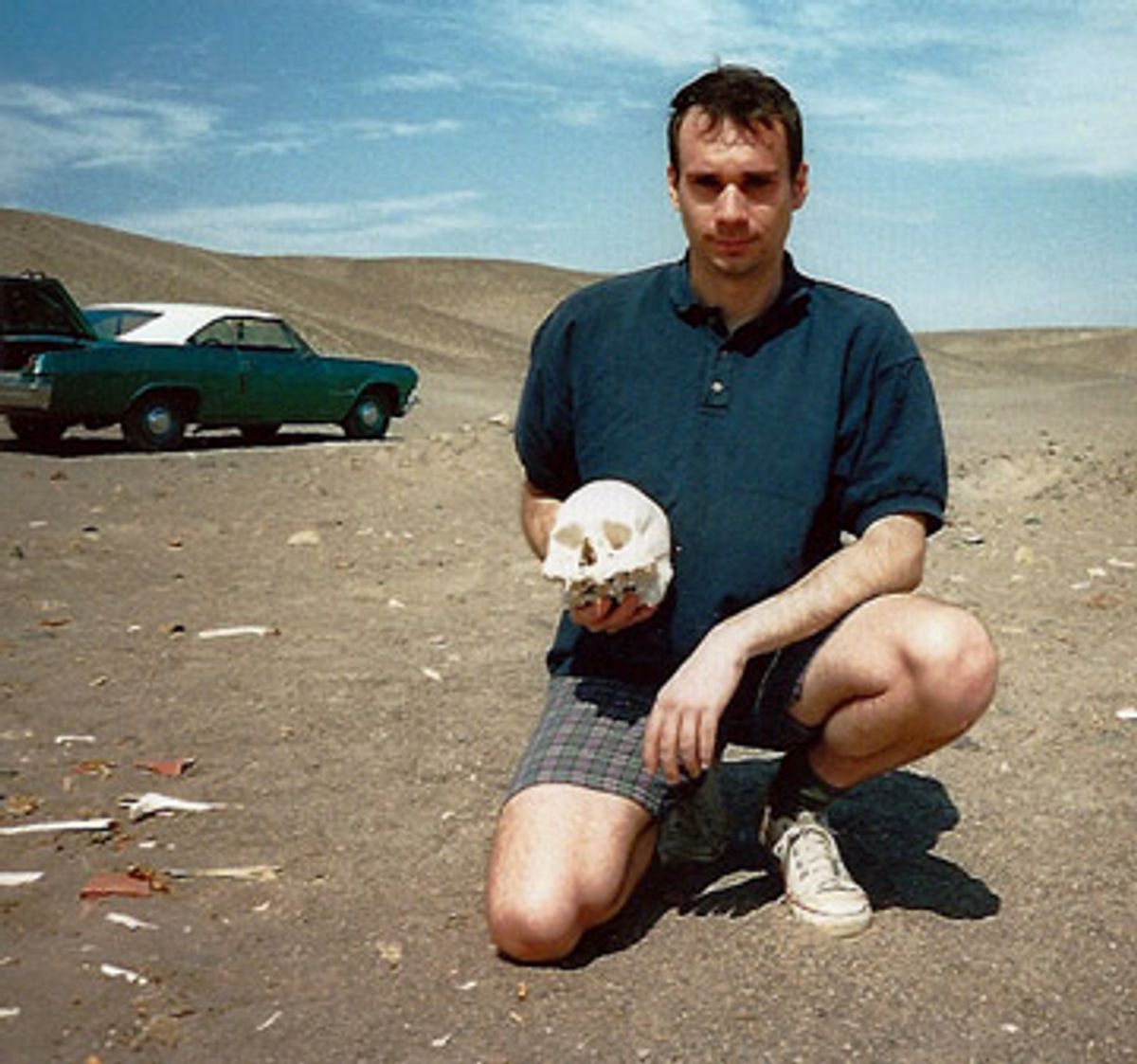 You'd have to call it ironic that two days after I published a column on ridiculous airline names, a One-Two-Go Airlines jetliner crashed on a Thai resort island. It would almost be funny, if not for the 89 people who lost their lives.

One What Who? Yeah, I'd never heard of it either. Turns out the company is a division of something called Orient Thai Airways, itself an oddly named entity. Orient Thai, a charter outfit, has been around since 1992. It operates a fleet of 10 Boeing 747s. One-Two-Go, its low-fares offshoot, started flying about four years ago.

Flight 262 crashed on Phuket, a popular tourist destination known for its idyllic beaches and high-end hotels. (The island was badly hit by the 2004 tsunami, and some of you might remember it as the setting for Spalding Gray's "Swimming to Cambodia.") The aircraft, a twin-engined McDonnell Douglas MD-82, was attempting to land during stormy weather after a short flight from Bangkok. Based on eyewitness accounts, including those of survivors, the plane was at or near the point of touchdown when it suddenly tried to climb again. Apparently out of control, it barreled off the side of the runway, plowed through a retaining wall, broke apart and caught fire. Eighty-nine of the 130 passengers and crew perished, including both pilots.

In this space a few weeks ago I described how the maneuver of converting a landing back into a climb is, in the vast majority of cases, perfectly routine. The transition can be abrupt and rough on the senses, but it's perfectly natural for an airplane. I have personally been at the controls for dozens of such maneuvers over the years, in airplanes large and small; they occur for any number of reasons, few of them imminently hazardous. In some instances the airplane will actually make contact with the runway before again lifting off. Even a full-on, unintentional bounce, though it doesn't happen often, is recoverable. Depending on the situation, the crew can opt to save the landing and bring the plane back down, or apply power and climb away. So long as parameters of airspeed and attitude (i.e., alignment and position) are maintained, safety is more or less assured.

But what happened at Phuket was not your typical go-around or bumpy touchdown. The plane encountered highly unstable conditions from which escape was either difficult or impossible. How it got there is the question.

Officials are citing wind shear as a possible reason. "Wind shear" is a frequently heard buzzword in the aftermath of air disasters, but not everybody understands what it means. Allow me to borrow from a previous column:

Wind shear is a sudden change in the velocity and/or direction of the wind. Garden-variety shears are very common and rarely harmful, but a particularly virulent form, called a microburst, can be dangerous. Microbursts are localized, downward-flowing columns of air, typically encountered at low altitudes -- even while still on the runway -- in and around powerful storms. As the air mass descends, it disperses outward in different directions. Planes are not "slammed to the ground," as you'll sometimes read, but can suffer dangerous loss of airspeed and lift if a headwind suddenly shears to a tailwind during takeoff or landing. During the 1970s and 1980s, microbursts were accountable for a trio of tragedies in the United States that helped usher in a new generation of wind-shear detection technology.

The worst wind shears are now relatively easy to avoid, but the technology is not foolproof and the judgment of pilots remains important. Reportedly, the pilots of One-Two-Go had been issued a wind-shear advisory by the Phuket control tower. Additionally, the MD-82 is equipped with an onboard wind-shear warning system. The plane crashed anyway. Why? Apparently the airport's on-site detectors were inoperative, leaving the controllers to provide a less precise caution based on simple wind readings. Did the crew knowingly continue into dangerous conditions, or had they made a sound decision, based on the available information, only to be victimized by a rogue downburst they may not have reasonably expected? Or was it something else entirely? Nobody knows for sure.

As the investigation goes on, the media will continue its condensing of the facts, not wasting valuable space with nuance or useful explanations. We will be told that wind shear "caused" the crash, or that stormy weather was likely "a factor." Indeed it likely was, but lousy weather alone doesn't bring down planes. Lousy judgment during lousy weather is the more precise culprit.

While we're at it, let's hit the newspapers and clarify a few other distortions.

In a dispatch from Audra Ang of the Associated Press, we heard Chaisak Angsuwan, director general of Thailand's Air Transport Authority, say that the jetliner "lost balance and crashed." Pardon me for getting all semantic, but airplanes do not "balance" in the air. So long as lift is sufficient, flight is a very stable thing, even in the roughest turbulence. If lift is not sufficient, a plane will stall. But it does not "lose balance."

The same article also included accounts of passengers kicking out windows to escape the burning fuselage. They may have tried, but I doubt they succeeded. Aircraft windows need to withstand the forces of pressurization, which can exceed a thousand pounds of force per pane. Unless those windows were already damaged, even a panicked person would have a mighty hard time generating enough strength to dislodge one.

Ang's piece finishes with a somewhat oblique indictment of One-Two-Go and its ill-fated MD-82: "Many budget airlines use older planes that have been leased or purchased after years of use by other airlines." Not surprisingly, the accident has touched off debate on the safety of upstart foreign carriers. Civil aviation is expanding rapidly around the globe, with a slew of airlines popping up across Asia. There is plenty worth discussing, but this "older planes" aspect is chiefly a red herring.

Ang's statement is accurate -- many budget airlines do use older, secondhand planes. But so do most of the world's largest and safest airlines. The MD-82 at Phuket, seen here about two weeks before the mishap, was manufactured in 1983. (The MD-80 series is a derivative of the '60s-era Douglas DC-9.) That's fairly old, but there are aircraft just as elderly, or considerably more so, in the fleets of United, American, Delta, Northwest, FedEx, UPS and numerous others. The myth that older airframes are inherently unsafe has been tackled in this column on several occasions. They are not.

Granted, they need quality care and attention in order to stay that way. That requires money, skilled workers and effective regulatory oversight -- distinct challenges for small-time budget carriers in second- and third-world countries. But crash records don't reveal any significant, airframe-related patterns among young foreign airlines. Consider the players in some of the most notorious accidents during the past few years: One-Two-Go, Lion Air, Adam Air, Flash Airlines, Kam Air, Gol, TAM, TANS, Mandala Airlines, Helios Airways, Western Caribbean Airways. The aircraft involved were a pretty even mix of newer and older.

Fleet age is only part of the equation. In the end, it's the intangibles that make the difference: dedication and commitment.

Unfortunately for the consumer, ciphering out which airlines best embody these traits is extremely difficult. Of those names listed above, most are, or were, minor carriers lacking established pedigrees, operating in second- or third-world countries. But none of those factors, alone or together, is necessarily a red flag. Trustworthy airlines come in all shapes and sizes. Some are new, others have been flying for decades. Some are big, others are tiny. The "budget" tag is no giveaway -- in the United States, cheapo Southwest is the only major to have never had a full-blown crash. And neither is geography. Among the prejudices we need to overcome is a presumption that airlines of the developing world are, by their very nature, risky -- a tendency that is both offensive and statistically unsound. Some of the most impressive records hail from the globe's poorest, remotest corners -- LAB of Bolivia, Air Jamaica, Mexicana, Tunisair.

Of course, many airlines are too young to have meaningful records, and so they are especially tough to judge. A truly effective audit would require delving deep into training policies, maintenance records and company culture -- an almost impossible task from afar.

When there's little else to go on, trust your instincts. Get a "feel" for an airline by checking out its Web site and surfing through the comments left on travel blogs. But if and when things get murky, you should probably give the airline the benefit of the doubt. To reiterate a point I've made in the past, there is virtually no such thing as a "dangerous" airline. Not in Thailand, not in Africa, not anywhere. That is by no means an excuse for shoddy oversight, subpar maintenance or the poor quality of training inevitably uncovered at some companies, but let it remind you that flying is, on the whole, exceptionally safe even at its worst. Some airlines will always be safer than others, but in practical terms, exploring minute degrees of difference gives us little useful data. One carrier suffers three crashes in a 10-year period; another, two crashes. Considering that individual carriers make tens of thousands of departures ever year, that's not telling us much. Should a single error, or a stroke of bad luck, determine which is "safer"?

I know, fearful fliers out there want more than that. They want something definite and unambiguous, along the lines of: Avoid all non-U.S. and European airlines that have been in business for under 10 years. But that would be neither fair nor accurate. There are no blanket statements that apply.

This is possibly in poor taste, but I imagine more than one of the doomed passengers on Phuket had taken a look at the One-Two-Go logo on his or her ticket and wondered, with a roll of the eyes, "What am I getting myself into?"

That's a reasonable question with a complicated answer.

Re: Fuel on the fire

As an engineer who makes a living cleaning up fuel spills, I have to point out the error in the Patrick Smith's use of the phrase "highly volatile jet fuel." Jet fuel, more specifically Jet-A, is 99 percent kerosene, which consists mostly of semivolatile petroleum hydrocarbon compounds. The term "volatility" refers to the speed at which a compound evaporates, not to explosiveness. Jet fuel is far less volatile than the gasoline you put in your car.

"Volatile" is one of those words we don't really stop to consider, but you're right. "Flammable," maybe, was the better choice of adjectives. What makes this gaffe annoying is that I specifically addressed the nonvolatility of jet fuel in a past column, and there's a segment in my book about it also. While I wouldn't recommend trying it, you can hold a lighted match directly above an open tank of Jet-A, and it will not ignite. Once the fuel atomizes, however, such as during a crash, or otherwise comes in direct contact with an ignition source, it obviously burns quite fiercely.