Bravo to Chris Matthews for speaking out against the Bush administration's policies of stifling free speech. 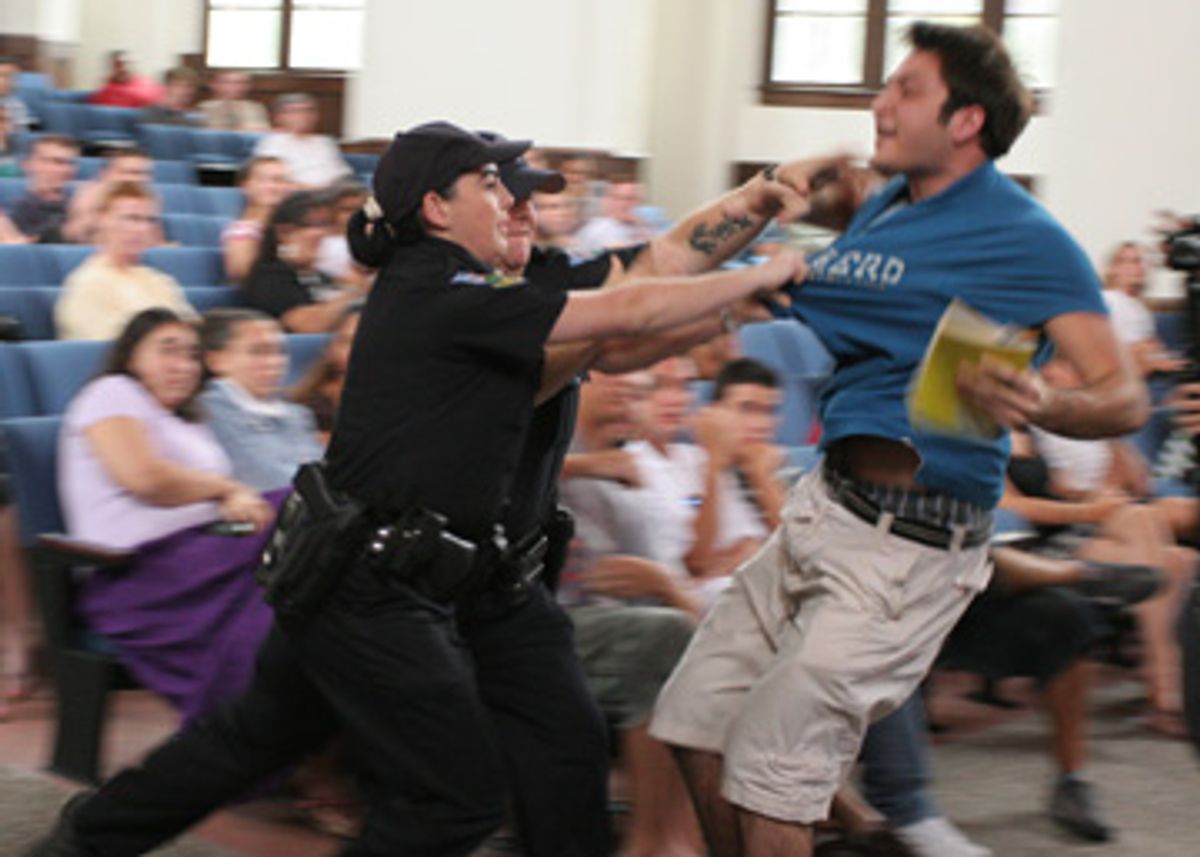 Defending Chris Matthews is not exactly a preoccupation of mine -- in fact, we've had our sharp disagreements from time to time -- but on Tuesday evening he spoke an important truth for which he is now under attack. Appalled by the Tasering of student Andrew Meyer during an appearance by Sen. John Kerry at the University of Florida, Matthews said on "Hardball" that he regards that incident as "an iconic moment" in the degradation of free speech during the Bush years.

As a guest on that segment, along with Medea Benjamin of Code Pink, who is regularly arrested for protesting at public events, I had to agree.

The predictable reaction of the right wing, which had largely treated the Florida incident as an excuse to bash the wholly innocent Kerry, was to denounce us for daring to broaden the discussion. "Matthews, Conason Blame Bush, Rove, Iraq, Fox for the Moonbat Taser Incident," blared Hot Air, a conservative blog. "Matthews Blames Iraq War for Tasered Student Incident," barked the Media Research Center. Rush Limbaugh fumingly described me as a deranged member of the "drive-by media" and went on to complain bitterly: "You have a liberal kid at a liberal college campus, listening to a liberal Democrat former presidential candidate and current senator. He raises hell, will not shut up. They Taser the guy, and liberals say, 'See what Bush has wrought?'"

Of course that is an exaggeration and distortion of the point made by Matthews, but then it is much easier to lampoon his argument than to answer it. Rather than blaming Bush for the overzealous cruelty of the Florida campus cops, he was addressing a subtler and more disturbing problem: the gradual diminishment of constitutional freedoms and, specifically, the freedom to assemble peaceably, to speak and to protest in a political environment dominated by war, terror and "security."

Even before 9/11 provided the pretext for a wide variety of incursions on liberty, the Bush White House pushed back as hard as possible against protest and abused the authority of the Secret Service. Corralling demonstrators into "First Amendment zones" that were often thousands of yards or even miles from the site of presidential visits began almost as soon as Bush was inaugurated. So did the ideological vetting of citizens who wanted to come hear the president speak, as a means to ensure that nobody could display or voice a dissenting message that might be viewed or heard by the president or his equally sensitive vice president. Anyone who tried to resist these obnoxious practices was threatened, detained or even arrested.

As Matthews noted on Tuesday evening, the Bush White House standardized those methods for squelching speech in a manual for presidential advance teams. "By the way, 80 percent of the country disagrees with him," Matthews quipped, "so you've got to have this manual handy." Then he quoted a telling section: "If demonstrators appear likely to cause only a political disruption, it is the advance person's responsibility to take appropriate action. Rally squads should be dispatched to surround and drown out demonstrators immediately."

That October 2002 manual -- obtained in heavily redacted form last June by the American Civil Liberties Union in the course of litigation against the Bush administration -- includes copious instructions for ensuring that dissension need never be seen nor heard. Its repetitive themes include "the best method for preventing demonstrators," "deterring potential protestors from attending events," and "designat[ing] a protest area ... preferably not in view of the event site or motorcade route." Potential protesters are to be ignored only "if it is determined that the media will not see or hear" them.

Unfortunately for the White House, such strategies are patently unconstitutional and violate several provisions of the Bill of Rights. It is unlawful to bar individuals from public events because they have the wrong bumper stickers on their cars, or wear the wrong T-shirts, or belong to the wrong organizations, or have written the wrong letters to the editor of their local newspaper, as the president's advance agents have repeatedly done over the past six years. The courts have spoken clearly on this issue, and the Bush administration has been forced to back down. Last month, the ACLU won a settlement of $80,000 for Jeffery and Nicole Rank, a Texas couple who had worn T-shirts critical of Bush to a July 4, 2004, event at which he spoke in West Virginia.

But in the meantime the Bush Republicans have inflicted a great deal of damage on the culture of democracy. Having written a book on the subject of creeping authoritarianism under the Bush regime, I am accustomed to accusations of paranoia or worse, so it was refreshing to hear Matthews speak out in defense of liberty against a president he has often praised. Perhaps now he should consider airing a segment or two on the ACLU lawsuits -- and let the right-wingers come on to explain why excluding and persecuting dissenters should not be considered un-American.