"The Assassination of Jesse James by the Coward Robert Ford" 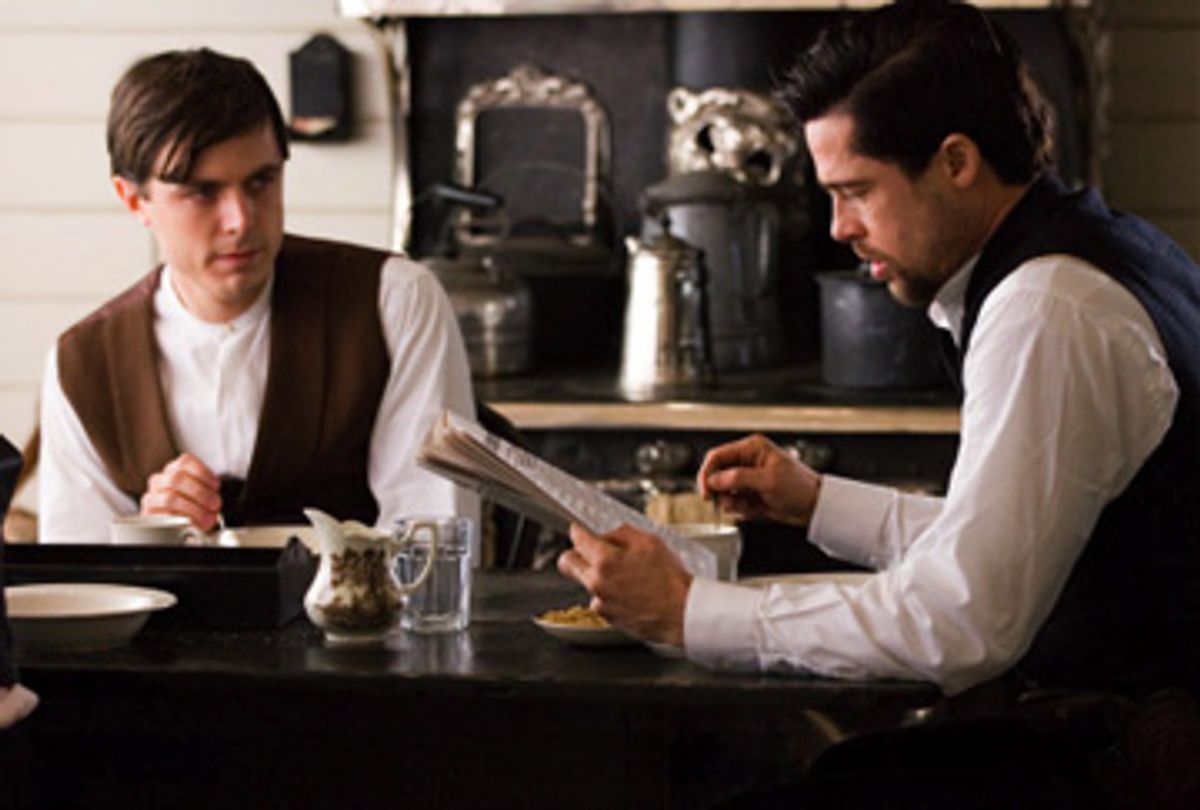 There's so much process here that there's barely a story: Director Andrew Dominik (who made the 2000 "Chopper") hasn't just turned Ron Hansen's novel into a movie; he's repurposed it as an ordeal. By the time Brad Pitt's Jesse James finally stands up and walks across the room to straighten that picture on the wall -- at which point Casey Affleck's Bob Ford puts a bullet in his back -- we've clocked hours' worth of rippling wheat fields. We've watched as a mosquito, having had the audacity to land on human skin, gets slapped dead; its plump, blood-filled carcass is then smeared between clumsy fingers. We've had time to savor the moment when one outlaw happens upon another bathing in a metal tub (again, in a wheat field -- why not?), and comments, "You got a big ole pecker fer such a little squirrel." Is that a Malick in your pocket, or are you just happy to see me?

"The Assassination of Jesse James" is so finicky it feels more like a doily than a western. Even the cinematography, by Roger Deakins, pretty enough in a polished-saddle-leather kind of way, feels flat and undistinguished. Dominik attempts to tell the story -- not all that clearly -- of the last days of Jesse James and his gang, a Missouri-based outfit that includes Charley Ford (Sam Rockwell), Bob's older brother; James' cousin, Wood Hite (Jeremy Renner); Dick Liddil (Paul Schneider); and, of course, Jesse's brother, Frank (played by Sam Shepard -- I sighed with relief when I saw him, figuring he might bring some class to the joint, but unfortunately, he drops out after just a few scenes). Ford, as played by Affleck, is clearly a weedy creep, but after he finally persuades James to take him along on a train robbery (the infamous Blue Cut job), he somehow worms his way into Jesse's affections, a lapse in judgment that will eventually cost Jesse his life.

Let's not even get into the movie's odd homoerotic supertext: the way Bob, who has worshiped Jesse since his youth, secretively keeps a box of Jesse James memorabilia under his bed, or the way, the day before he kills his idol, he creeps around Jesse's house, poking around his toilet articles, even slipping between his bedsheets and inhaling the aroma of "talcum and lavender" lingering there. Dominik is clearly looking for deep psychological motivations here. And everyone knows that screwed-up killers are pretty much always latent homosexuals, right?

Pitt, even though he's ostensibly the star of the movie, is barely a presence in it; it's as if he occasionally wanders in from his trailer to squint meaningfully or quizzically at one or another of his costars, only to retreat again. That leaves Affleck to pretty much carry the movie, which he attempts to do by mumbling through it. I suppose Affleck, with his watery, nowhere voice, those rabbity, pink-rimmed eyes, does give us a picture of Bob Ford as an essentially sad, inconsequential little guy. Early in the movie, he announces to Frank James, "I got qualities that don't come shinin' through right at the outset." He can say that again. Unfortunately, we're facing a whole movie's worth of watching that little light o' his shine. Affleck's articulation is so lousy that when he pleads with Frank to be taken on as the gang's "sidekick," I thought he said, "psychic" -- which might have made for a better movie, or at least more colorful costumes.

"The Assassination of Jesse James" never lets us forget that it's a serious literary adaptation. A narrator, his voice floating toward us from the great beyond, describes the action as we're seeing it, on the off-chance we're suffering from temporary blindness: Jesse hugs his cute little kids, and we hear of "the sting of his mustache against their cheeks." When Jesse's wife (played by Mary-Louise Parker, who has fewer lines than nearly anyone else in the movie but who also gives the best, most understated, performance) wipes her hands on her apron, we're told that she "wiped her pink hands on an apron" -- because, you know, we probably ascertained that she has hands, but we might not have noticed that they were pink. This disembodied voice (it belongs to Hugh Ross) presents us with other important facts: "Theirs was a wandering existence" and, my personal favorite, "He read auguries in the boiled intestines of chickens." (Come to think of it, why couldn't this have been a movie about psychics?) "The Assassination of Jesse James by the Coward Robert Ford" represents a breakthrough in the moviegoing experience. It may be the first time we've been asked to watch a book on tape.