As we crossed the Syrian border and saw the last of the Iraqi flags, the tears began. How can such a small distance separate life from death? 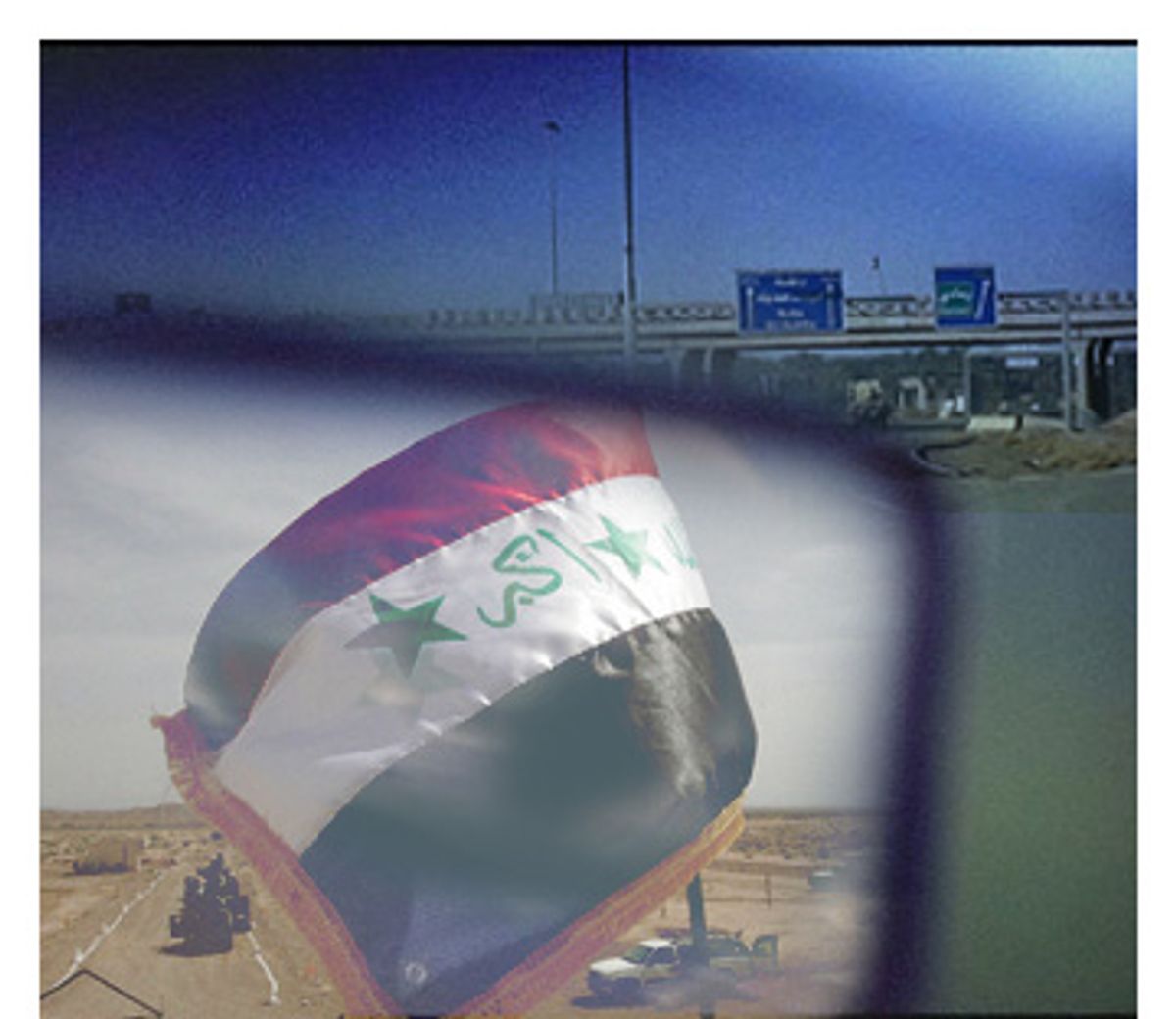 Two months ago, the suitcases were packed. My lone, large suitcase sat in my bedroom for nearly six weeks, so full of clothes and personal items that it took me, E. and our 6-year-old neighbor to zip it closed.

Packing that suitcase was one of the more difficult things I've had to do. It was Mission Impossible: Your mission, R., should you choose to accept it is to go through the items you've accumulated over nearly three decades and decide which ones you cannot do without. The difficulty of your mission, R., is that you must contain these items in a space totaling 1 m by 0.7 m by 0.4 m. This, of course, includes the clothes you will be wearing for the next months, as well as any personal memorabilia -- photos, diaries, stuffed animals, CDs and the like.

I packed and unpacked it four times. Each time I unpacked it, I swore I'd eliminate some of the items that were not absolutely necessary. Each time I packed it again, I would add more "stuff" than the time before. E. finally came in a month and a half later and insisted we zip up the bag so I wouldn't be tempted to update its contents constantly.

The decision that we would each take one suitcase was made by my father. He took one look at the box of assorted memories we were beginning to prepare and it was final: Four large identical suitcases were purchased -- one for each member of the family -- and a fifth smaller one was dug out of a closet for the documentation we'd collectively need: graduation certificates, personal identification papers, etc.

We waited ... and waited ... and waited. It was decided we would leave mid- to late June -- examinations would be over and as we were planning to leave with my aunt and her two children, that was the time considered most convenient for all involved. The day we finally appointed as THE DAY, we woke up to an explosion not 2 km away and a curfew. The trip was postponed a week. The night before we were scheduled to travel, the driver who owned the GMC that would take us to the border excused himself from the trip -- his brother had been killed in a shooting. Once again, it was postponed.

There was one point, during the final days of June, where I simply sat on my packed suitcase and cried. By early July, I was convinced we would never leave. I was sure the Iraqi border was as far away, for me, as the borders of Alaska. It had taken us well over two months to decide to leave by car instead of by plane. It had taken us yet another month to settle on Syria as opposed to Jordan. How long would it take us to reschedule leaving?

It happened almost overnight. My aunt called with the exciting news that one of her neighbors was going to leave for Syria in 48 hours because their son was being threatened and they wanted another family on the road with them in another car -- like gazelles in the jungle, it's safer to travel in groups. It was a flurry of activity for two days. We checked to make sure everything we could possibly need was prepared and packed. We arranged for a distant cousin of my mom's who was to stay in our house with his family to come the night before we left. (We can't leave the house empty because someone might take it.)

It was a tearful farewell as we left the house. One of my other aunts and an uncle came to say goodbye the morning of the trip. It was a solemn morning and I'd been preparing myself for the last two days not to cry. You won't cry, I kept saying, because you're coming back. You won't cry because it's just a little trip like the ones you used to take to Mosul or Basra before the war. In spite of my assurances to myself of a safe and happy return, I spent several hours before leaving with a huge lump lodged firmly in my throat. My eyes burned and my nose ran in spite of me. I told myself it was an allergy.

We didn't sleep the night before we had to leave because there seemed to be so many little things to do. It helped that there was no electricity at all -- the area generator wasn't working and "national electricity" was hopeless. There just wasn't time to sleep.

I knew then as I know now that these were all just items -- people are so much more important. Still, a house is like a museum in that it tells a certain history. You look at a cup or stuffed toy and a chapter of memories opens up before your very eyes. It suddenly hit me that I wanted to leave so much less than I thought I did.

Six a.m. finally came. The GMC waited outside while we gathered the necessities -- a thermos of hot tea, biscuits, juice, olives (olives?!) that my dad insisted we take with us in the car. My aunt and uncle watched us sorrowfully. There's no other word to describe it. It was the same look I got in my eyes when I watched other relatives and friends prepare to leave. It was a feeling of helplessness and hopelessness, tinged with anger. Why did the good people have to go?

I cried as we left -- in spite of promises not to. The aunt cried, the uncle cried. My parents tried to be stoic, but there were tears in their voices as they said their goodbyes. The worst part is saying goodbye and wondering if you're ever going to see these people again. My uncle tightened the shawl I'd thrown over my hair and advised me firmly to "keep it on until you get to the border." The aunt rushed out behind us as the car pulled out of the garage and dumped a bowl of water on the ground, which is a tradition -- it's to wish the travelers a safe return ... eventually.

The trip was long and uneventful, other than two checkpoints being run by masked men. They asked to see identification, took a cursory glance at the passports and asked where we were going. The same was done for the car behind us. Those checkpoints are terrifying, but I've learned that the best technique is to avoid eye contact, answer questions politely and pray under your breath. My mother and I had been careful not to wear any apparent jewelry, just in case, and we were both in long skirts and head scarves.

Syria is the only country, other than Jordan, that was allowing people in without a visa. The Jordanians are being horrible with refugees. Families risk being turned back at the Jordanian border, or denied entry at Amman Airport. It's too high a risk for most families.

We waited for hours, in spite of the fact that the driver we were with had "connections," which meant he'd been to Syria and back so many times, he knew all the right people to bribe for a safe passage through the border. I sat nervously at the border. The tears had stopped about an hour after we'd left Baghdad. Just seeing the dirty streets, the ruins of buildings and houses, the smoke-filled horizon -- all helped me realize how fortunate I was to have a chance for something safer.

By the time we were out of Baghdad, my heart was no longer aching as it had been while we were still leaving it. The cars around us on the border were making me nervous. I hated being in the middle of so many possibly explosive vehicles. A part of me wanted to study the faces of the people around me, mostly families, and the other part of me, the one that's been trained to stay out of trouble the last four years, told me to keep my eyes to myself -- it was almost over.

It was finally our turn. I sat stiffly in the car and waited as money passed hands; our passports were looked over and finally stamped. We were ushered along, and the driver smiled with satisfaction. "It's been an easy trip, Alhamdulillah," he said cheerfully.

As we crossed the border and saw the last of the Iraqi flags, the tears began again. The car was silent except for the prattling of the driver, who was telling us stories of escapades he had while crossing the border. I sneaked a look at my mother sitting beside me and her tears were flowing as well. There was simply nothing to say as we left Iraq. I wanted to sob, but I didn't want to seem like a baby. I didn't want the driver to think I was ungrateful for the chance to leave what had become a hellish place over the last four and a half years.

The Syrian border was almost equally packed, but the environment was more relaxed. People were getting out of their cars and stretching. Some of them recognized each other and waved or shared woeful stories or comments through the windows of the cars. Most importantly, we were all equal. Sunnis and Shias, Arabs and Kurds -- we were all equal in front of the Syrian border personnel.

The first minutes after passing the border were overwhelming. Overwhelming relief and overwhelming sadness. How is it that a stretch of only several kilometers and maybe 20 minutes so firmly segregates life from death?

How is it that a border no one can see or touch stands between car bombs, militias, death squads and ... peace, safety? It's difficult to believe -- even now. I sit here and write this and wonder why I can't hear the explosions.

I wonder at how the windows don't rattle as the planes pass overhead. I'm trying to rid myself of the expectation that armed people in black will break through the door and into our lives. I'm trying to let my eyes grow accustomed to streets free of roadblocks, Hummers and pictures of Muqtada al-Sadr and the rest ...

How is it that all of this lies a short car ride away?