Does a bigger Army mean another Iraq?

Every major presidential candidate, including the Democratic front-runners, wants a much bigger Army. But that means an Army expressly designed to fight another war like this one. 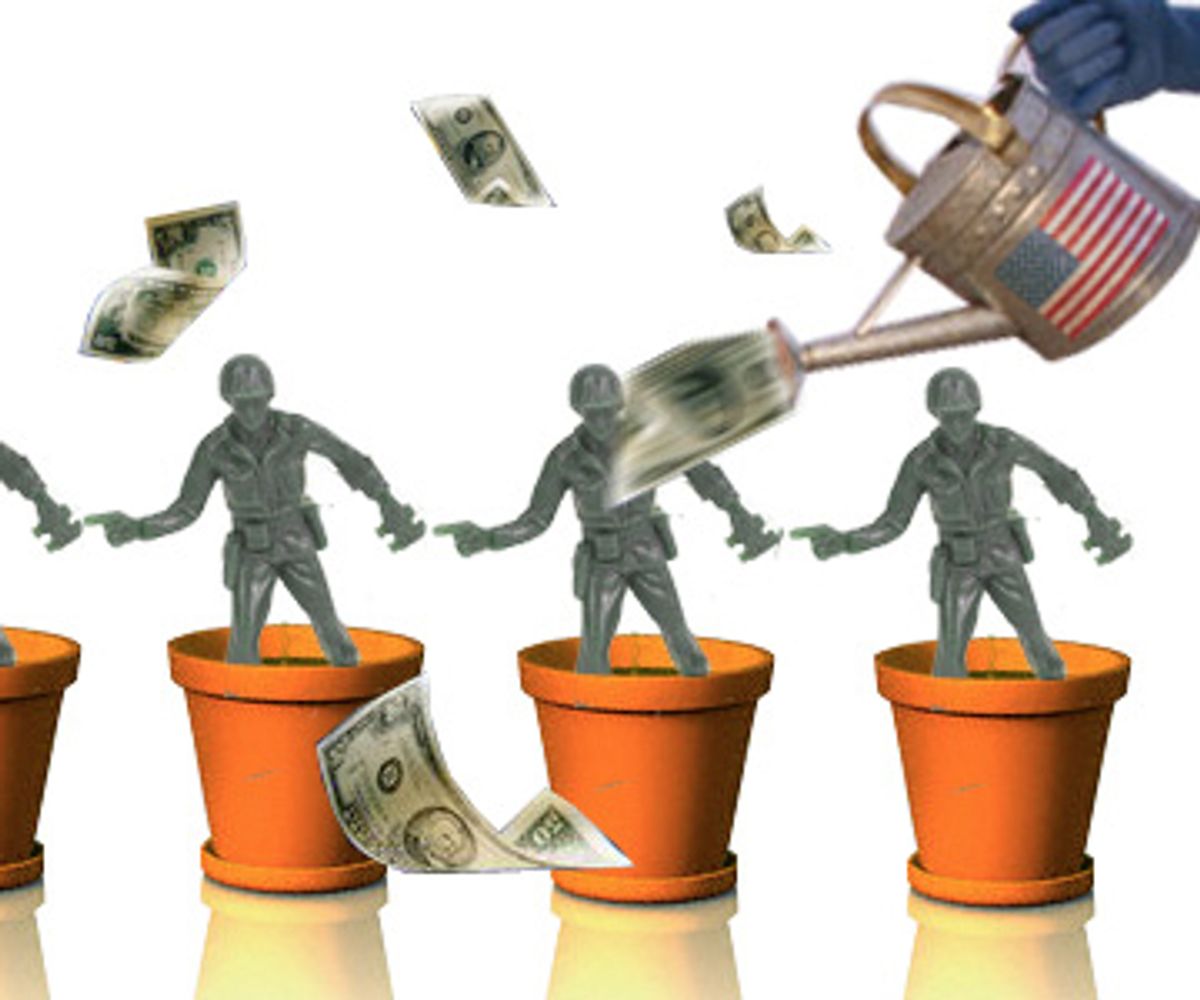 With the Army and Marine Corps stretched to a breaking point because of the wars in Iraq and Afghanistan, it has become a no-brainer for the major presidential candidates to call for the biggest increase in ground forces since the 1960s. All three Democratic front-runners are either on board or open to the idea, perhaps because for Democrats in particular, it's a risk-free way to look hawkish and burnish national security credentials. "[Democrats] don't want to look weak on defense," said Stephen Biddle, a senior fellow for defense policy at the Council on Foreign Relations. Calling for more troops "is an easy signal of your bellicosity and your willingness to be serious about defense policy."

The next president, therefore, is almost certainly going to be an advocate of adding tens of thousands of soldiers and Marines. But setting aside where these fresh recruits will come from, given current recruiting woes, adding troops will have serious consequences that may not be obvious more than 13 months before the general election. And the consequences may not please antiwar Democratic primary voters. Committing to an expanded Army and Marine Corps implies spending a great deal of additional money on the military. But it also means the presidential candidates are choosing sides in an internal Pentagon dispute -- and they are choosing the side that wants a military designed to fight another war just like the unpopular war the United States has been waging in Iraq since 2003.

Whoever the next president is, he or she will inherit a Pentagon divided. In large part, points of view diverge by service branch. The Air Force, for example, has what Biddle describes as a simple argument: "Never again." Air Force brass say Americans do not want to be bogged down in another Iraq. Meanwhile, explains Biddle, "the conventional Army thinks that the future is more Iraqs ... They are trying to figure out how they can build an Army that will do better in the next one," he explained.

But both sides of the debate agree on one thing. They feel they've been left hanging by the lame-duck Bush administration, and they are waiting for the next president to articulate a new national security strategy. "We need adult supervision," said one retired general who served in Iraq.

"The next president has some really hard decisions to make," said Dr. Conrad Crane, director of the U.S. Army Military History Institute. Crane also coauthored the Army's new counterinsurgency field manual with the commander in Iraq, Gen. David Petraeus. Military planning is about deciding on a strategy and then lining up the resources and training to get it done, whether that means more soldiers trained for counterinsurgency or more airplanes to bomb the enemy into submission. "If we really want to be a revolutionary power and export democracy around the world, then we need a pretty good-sized Army," explained Crane. "If we are just about maintaining stability, maybe we don't need as much.

"But that all ties into what is your national security strategy," he said. "What are you trying to do?"

When it comes to matching strategy and resources, many military experts agree that the Bush administration has a dismal record. In Iraq, the administration had a strategy of preemption, but for years remained ideologically hostile to the idea that vast numbers of troops would be needed to get the job done. President Bush did not call for a significant increase in the size of the Army till earlier this year.

Now military planners are divided over where to go next, but the 2008 candidates have effectively voted, whether they truly appreciate it or not, for the Army's point of view.

The strategy articulated by Petraeus, Nagl and Crane in the new counterinsurgency manual released late last year emphasizes the civilian population as the key to success -- protecting the population and turning support away from insurgents. That means troops. Lots of them. If followed to the letter, the counterinsurgency doctrine requires one counterinsurgent soldier for every 40 or 50 civilians -- or 150,000 soldiers in Baghdad alone. President Bush adopted a version of that strategy early this year for the so-called surge in Iraq, though without the full contingent of troops. "Securing the population requires boots on the ground, in most cases," noted Crane. "They don't have to be American boots. But they have to be somebody's boots."

That means a future Army with not just tens of thousands of additional soldiers, but perhaps hundreds of thousands of more troops for the active-duty Army, which had just over 510,000 soldiers as of this summer. "I served in 1991 in an all-volunteer active-duty Army of 750,000," Nagl said. "I believe that the threat environment we are in today is far more dangerous than it was in 1991." Nagl is also recommending the creation of a "permanent Army advisory corps" of at least 20,000, but perhaps as many as 60,000 new soldiers who specialize solely in standing up indigenous forces against insurgents around the world.

Bush has already called for an increase of 65,000 more soldiers and 27,000 more Marines over the next five years. The Congressional Budget Office this spring estimated that just fulfilling Bush's call for these additional 92,000 troops would cost $108 billion over the next six years.

But that, and more, might be necessary. In a world of fragile states and terrorist networks with global reach, the involvement of the United States in counterinsurgency operations might be inevitable, says Crane. "Is this going to matter after Iraq?" Crane asked about his counterinsurgency manual. "To be honest, I don't know. If you look at what happened to America after Vietnam, we basically threw away our files, ran away from it, and said, 'We are not going to fight this kind of war again.' I don't think our enemies are going to let us this time."

Nagl agrees that simply hoping to avoid another war like Iraq or Afghanistan could be dangerously naive. "The enemy gets a vote," he said flatly.

But so do the American people. Given the public sentiment on Iraq, some Pentagon officials say no president is about to embark on a similar mission anytime soon. According to this camp, Nagl and Crane are caught in the proverbial trap of planning to fight the previous war.

Maj. Gen. Charles Dunlap Jr., the Air Force deputy judge advocate general, says there are "limits to what the American people are willing to accept" in future wars. "I think we are nearing the max right now in Iraq in terms of what people will tolerate in an occupation scenario that requires a lot of U.S. soldiers on the ground getting killed and wounded, that costs $100 billion a year, and that no one is saying is going to succeed anytime soon," Dunlap said in a telephone interview. "I think this country has no stomach for anything that even smacks of another occupation like Iraq -- even if we should do it," he said.

It's not that Nagl and Crane are wrong, says Dunlap. He just worries that they're not realistic. "My fundamental disagreement with the Army's new counterinsurgency strategy is not that it can't work. If you applied it to Iraq, you would put 500,000 troops in there for ten years. That will work. What I am saying is that is not politically viable. And we need to be able to offer decision makers something different."

Rather than a massive police force of U.S. troops, Dunlap argues that counterinsurgencies would be best fought by smaller numbers of U.S. troops dedicated almost exclusively toward training indigenous forces to fight their own wars. Those units would be backed up by potent U.S. air power and other advanced technology where the United States maintains an edge. An example is U.S. counterinsurgency efforts in the Philippines, where U.S.-trained Philippine Army units are fighting Abu Sayyaf, a terrorist group, in the southern Philippines.

This might require only a relatively small increase in ground forces, including brigades that focus solely on training indigenous forces. "I think we need to have a counterinsurgency capability," Dunlap said. "But I think it needs to be one that is a small footprint, leverages technology, and is mostly about showing other people how to do it."

He argued that the Army counterinsurgency crowd is overemphasizing the tactical importance of the civilian population. "In our own revolution," said Dunlap, "two-thirds of the people either did not support the revolution or were ambivalent about it. The British had two-thirds and still lost."

There is also concern among some military experts that refashioning the military into a massive counterinsurgency force will be a problem if the United States is faced with a more conventional threat from a country like Russia or China. "I think traditional warfare is going to come right back and bite us," worried Biddle.

A cynical version of this entire debate is that the Army wants more soldiers and the Air Force is worried that will dry up funding for airplanes. "Sure, some of this may be simply parochial," Dunlap acknowledged. He noted that "more soldiers means more opportunity, more power, et cetera." But Biddle said that both camps "honestly believe that they are right and the other is wrong."

For now, judging from the positions of the 2008 candidates, the Army seems to be winning the debate. According to Biddle, however, time is not on the Army's side. "The Air Force is going to take it on the chin in the short term and probably win in the long term since what they are proposing is affordable and looks like it limits the cost and sacrifices of pursuing our interests."