Janet Malcolm's search for the real Gertrude Stein and Alice B. Toklas exposes some hard truths about the duo and biography itself. 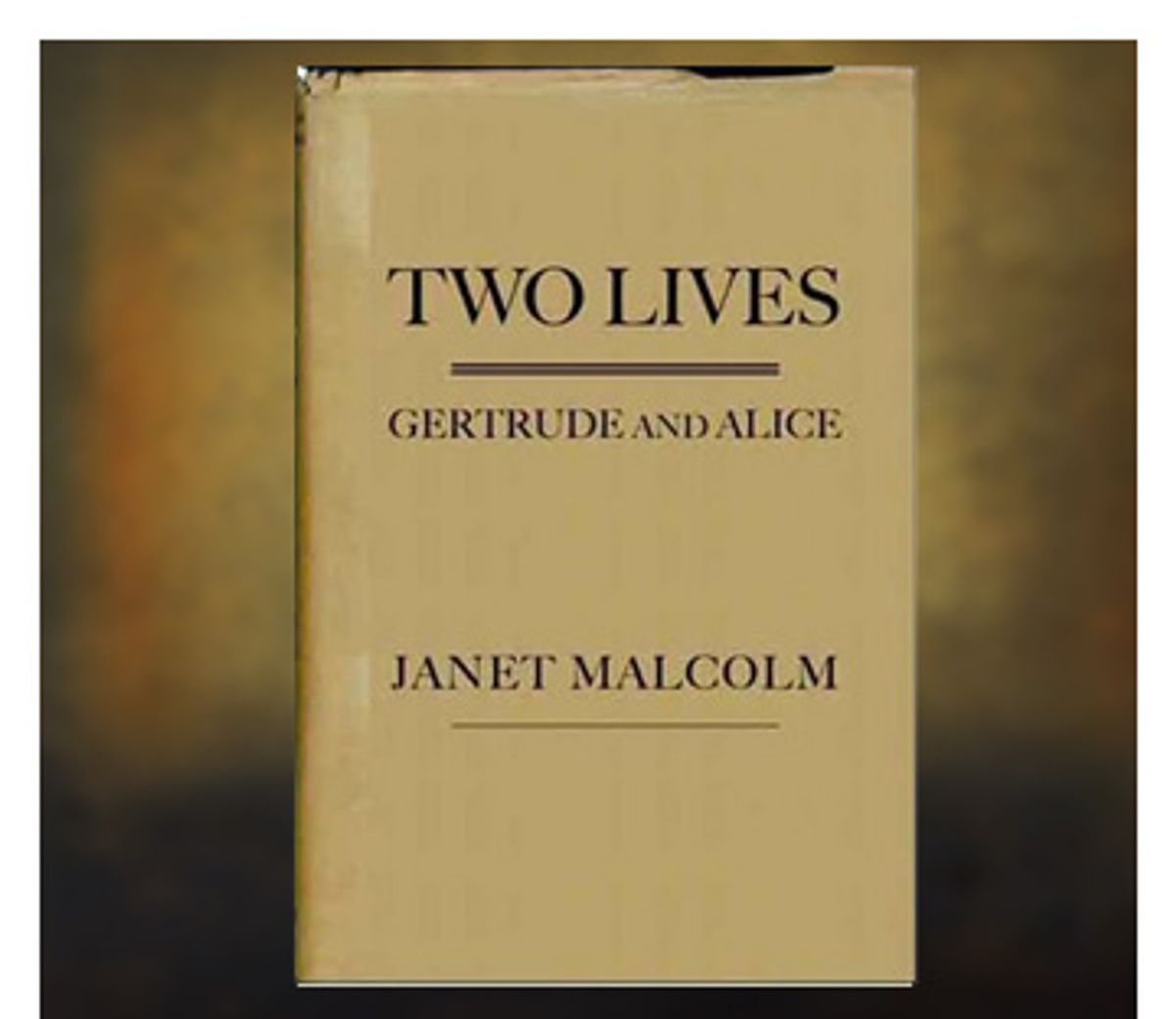 Gertrude Stein has a much deserved reputation as a great American writer whom no one reads. This is considerably different from being an obscure experimental filmmaker because, in the end, a difficult filmmaker will always have more fans than a difficult writer -- not because one is a greater or lesser art form, but simply because it takes less time to watch a difficult movie than it does to read a hard book. I have absolutely no evidence to this effect, but my gut tells me -- and it's a strong gut -- that there are probably more people who have sat through six hours of slow tracking shots across a desolate Hungarian farming collective in Bela Tarr's "Satantango" than have slogged through the 900 pages of Gertrude Stein's "Making of the Americans." Six hours? Six hours won't get you through Stein's first chapter.

To the extent that Stein is familiar to the reading public, it is as the voice behind "a rose is a rose is a rose"; as coiner of the term "Lost Generation"; as the host of a fabulous salon on the Rue de Fleurus where she hosted Picasso, among others; and as the fat Buddha with the giant Roman head who had a lifelong love affair with wiry, pursed-mouth Alice Toklas.

She cuts a striking figure. So it is that those who know Stein only by way of "The Autobiography of Alice B. Toklas," or even those who know absolutely nothing of her many poems, plays, vignettes, speeches and novels, will find Janet Malcolm's "Two Lives: Gertrude and Alice" hard to put down. The book combines three essays about Stein and Toklas that Malcolm published in the New Yorker in 2003, 2005 and 2006. (Some minor editing has been done, but there is no significant new material to be found in its pages.) Like the best New Yorker writing, which can make the average lay reader momentarily obsessed with the habits of bonobos, it requires no preparation.

The first section deals largely with how it was that Stein and Toklas, two Jews who almost never wrote about, spoke about or otherwise acknowledged their Jewishness, survived World War II while hidden in plain view in the French countryside. The somewhat distressing answer is that their political ignorance spared them from mental anguish and their friendship with a high-level Vichy collaborator, one Bernard Faÿ, spared their lives. It seems that Stein and Toklas were unaware of Faÿ's crimes; after he was sentenced to prison following the war, Toklas lobbied for his release (which proved a little awkward for some of her friends). Helping Malcolm to unravel the story of Stein and Toklas' relationship with Faÿ is a trio of Stein academics who warmly share their enthusiasm for her while taking pity on Malcolm for preferring the "audience"-friendly Stein to the "real" work.

In the second essay, Malcolm writes about "The Making of Americans," the humongous novel whose central project seems to be creating "truly a new way of writing a novel, a novel where the author withholds the characters from the reader." The book is a "text of magisterial disorder," a tug of war between characters that Stein cannot bring to life and a narrator "aware of the incommunicability of her maddeningly complex thoughts." Malcolm's visits with the Stein oracles yield the story of one mysterious scholar, Leon Katz, who famously interviewed Toklas for many hours in the 1950s about the making of "The Making of Americans" and unpublished notes Stein made during the drafting of the book. Katz's dissertation is a kind of "cult classic" in academia, and yet he has been remarkably slow to deliver (that is, publish) all the goods from the interview, which frustrates the Steinophiles to no end. Malcolm tries to meet him, and he cancels their meeting, afraid she will steal his narrative for her own.

The relationship between Toklas and Stein that emerges in "Two Lives" indicates that the two "did not set out on their walk through life quite as decisively and serenely as the legend has it." Katz confronts Toklas with unflattering notes Stein wrote about her when they first met; Malcolm highlights passages from Toklas' "What Is Remembered" that paper over a mysterious argument; a letter reveals the resentment Toklas carried against Stein because while Nazi looters ignored Stein's precious modern paintings, they ransacked the pretty things -- candlesticks, a petit-point footstool -- that this "wife of a willful genius" cherished.

In one of the book's most startling episodes, Ulla E. Dydo, one of Malcolm's posse of professors, shares the discovery she made while painstakingly comparing Stein's published texts to the manuscripts. In the book-length poem "Stanzas in Meditation," Dydo found that every instance of the word "may" or "May" had been crossed out, replaced with "can" or "day" or "today." The change was not an improvement -- on the contrary, it made the difficult work even more awkward and, at times, nonsensical -- and Dydo puzzled over why Stein would have made this revision.

In a dream, the answer came to her. Alice Toklas, according to "The Autobiography of Alice B. Toklas," had come across a "forgotten" Stein novel, presumably "Q.E.D.," which features May Bookstaver -- a stand-in for a woman that Stein had loved before she met Toklas. Toklas became enraged, jealous, paranoid. According to Dydo, there are no "mays" in "Stanzas" because Stein was forced to eradicate them.

"The manuscript tells a terrible story," another of the Stein scholars says to Malcolm. "The force with which these words are crossed out. The anger with which this was done. Some of the slashes go right through the paper."

Craig Seligman once argued in Salon that the criticism that plagues Malcolm and her analyses of journalism and biography misunderstands her work. "She wasn't attacking the biographer's art any more than she had earlier been attacking the journalist's," Seligman writes in reference to "The Silent Woman," Malcolm's book about Sylvia Plath and Ted Hughes. "What she was doing, in fact, was engaging in it."

This newest installment of what is very much an ongoing investigation into narrative -- how a story is built, how facts are marshaled and how "truth" is agreed on -- is likely to trouble readers who would rather not know certain facts about Stein and Toklas. But it powerfully demonstrates how their images have been built and passed down to us. And so while Toklas emerges from "Two Lives" as a pinched, unpleasant woman, at once enabler and destroyer of Stein's art, Malcolm puts it into context. "Confessions of not really liking Alice are a leitmotiv of the Stein/Toklas memoir literature." And yet, she continually emphasizes, it is impossible to know for certain what passed between the two. Biography is merely a tool, and like all tools, is limited.

In one instance, Malcolm learns from a source that Stein advised a friend to not adopt a Jewish orphan in 1943, effectively sentencing him to death. Yet when she digs a little deeper, she finds the incident actually occurred in 1944, four months before France's liberation. There was never any question of putting the child in harm's way, or of his leaving the household until it was safe. The source "had not realized that her laconic account could be read as a condemnation of Stein. She assumed that we knew what she knew."

"Almost everything we know we know incompletely at best," Malcolm continues. "And almost nothing we are told remains the same when retold." Malcolm conjures up the figures of Stein and Toklas in flashes, temporarily igniting the letters and texts she makes such good use of. The biographer's game is a kind of treasure hunt, and "Two Lives" lays bare its rules.