The war president "at peace" with himself

Bush's 2003 conversation with the Spanish prime minister shows his smug determination to invade Iraq at all costs. 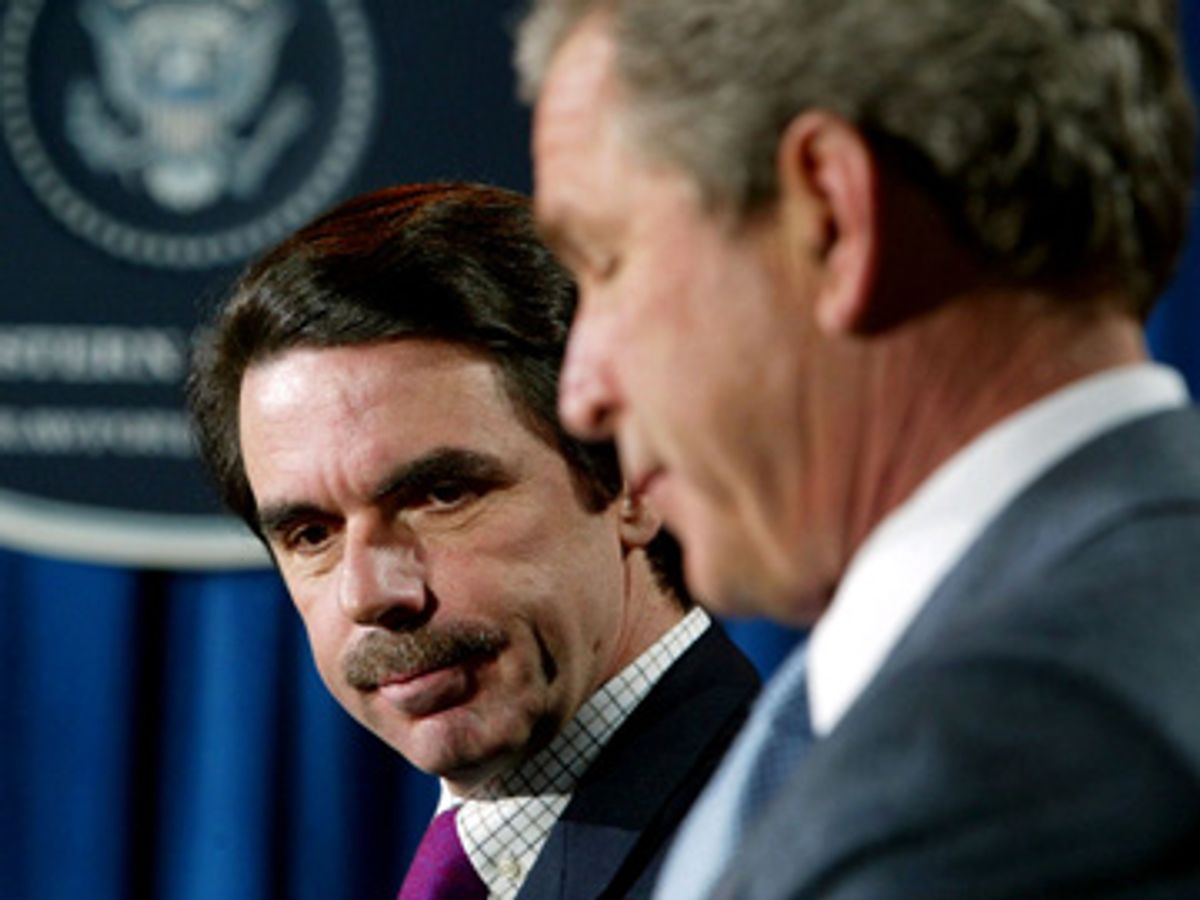 "The only thing that worries me is your optimism."

So remarked José María Aznar, then the prime minister of Spain, in a prescient moment during a February 2003 conversation with George W. Bush about the impending invasion of Iraq.

According to the transcript of that conversation published on Wednesday by the Spanish daily El Pais, Aznar implored Bush for "a little more patience" in building international consensus for action against Saddam Hussein and in seeking possible alternatives to war, in order to assuage the intense public opposition to American policy in Spain and throughout Europe.

The nervous Aznar asked repeatedly whether Saddam might perhaps be persuaded to leave Baghdad without military action -- eliciting a cryptic admission from Bush that it was indeed possible because the Egyptians were secretly discussing a possible deal with the Iraqi dictator that would allow him to depart with a billion dollars and "all the information he wants on weapons of mass destruction." Giving lip service to his own desire for a peaceful solution, Bush quipped that sending Saddam into exile would save "$50 billion," his administration's ridiculously low estimate for the war's cost (which will now exceed at least 20 times that amount), not to mention protect him from the agonizing responsibility for the deaths of American soldiers.

But Bush quickly waved away any such tantalizing possibility, along with all the rest of the concerns and proposals voiced by his staunchest ally next to British Prime Minister Tony Blair. Instead, he sternly warned that any foreign leader who continued to oppose him would be punished. Indeed, displaying his usual flair for diplomacy, he mocked the Spanish leader's worries about the growing rift between the United States and its traditional allies across the Atlantic. "The more the Europeans attack me," gloated the president, "the stronger I am in the United States."

The Bush-Aznar transcript is not as damning as the Downing Street memo that surfaced on the front page of the Sunday Times of London on May 1, 2005, which indicated that Bush had decided on war as early as July 2002, and suggested that American intelligence on Iraq's alleged weapons of mass destruction was being "fixed" to justify a preemptive invasion. Reportedly set down by Spain's ambassador to the United States during a weekend meeting at the president's home in Crawford, Texas, the transcript revolves around the Bush administration's frustrated effort to win approval for military action from the United Nations Security Council. It is yet another record of the illusions, the arrogance and the missed opportunities that characterized the administration's drive to war.

By now, of course, Bush's deceptive behavior during that period is familiar. Although officially open to a diplomatic resolution of the Iraq crisis -- such as a negotiated departure by Saddam -- it is clear from the transcript of his remarks to Aznar that peaceful alternatives received scant consideration. "We have to get rid of Saddam. There are two weeks left. In two weeks we'll be ready militarily," he told Aznar. "We'll be in Baghdad by the end of March."

That declaration seemed to trouble the Spaniard, who agreed that the time had come to end the standoff with Saddam but pleaded with Bush to seek "as much support as possible ... Have a little patience."

Yet Bush had very little patience with Aznar, let alone with the more recalcitrant leaders he encountered at the United Nations. Responding brusquely to the Spanish leader's plea for serious diplomatic effort, he apparently sought to transmit thuggish threats via Spain to other nations. According to Harper's correspondent Ken Silverstein's translation, Bush said: "Countries like Mexico, Chile, Angola, and Cameroon should know that what's at stake is the security of the United States ... [Chilean President Ricardo] Lagos should know that the Free Trade Accord with Chile is awaiting Senate confirmation and a negative attitude about this could put ratification in danger. Angola is receiving Millennium Account funds [to help alleviate poverty] and that could be jeopardized also if [the Angolan president] is not supportive."

Equally striking are the echoes of the "cakewalk" talk that pervaded White House propaganda in the weeks before the invasion. "We can win [the war] without much destruction," burbled Bush, attempting to reassure Aznar that the future would be bright. "We're planning for a post-Saddam Iraq and believe there is a strong base to build a better future. Iraq has a good bureaucracy and relatively robust civil society." Whatever Bush expected, the State Department's attempt to plan for Iraq's future would be discarded by Secretary of Defense Donald Rumsfeld; the former Iraqi government would be disbanded and its offices looted and burned; and of course Iraq's civil society would disintegrate into sectarian civil war.

If Aznar didn't anticipate those multiple disasters, at least he had the wit to urge caution, and to wonder aloud why Bush sounded so confident and sunny on the eve of massive bloodshed. (The Spanish people soon ratified his foreboding by dismissing his right-wing government in the next election.)

"I'm optimistic because I believe I'm right," replied the obtuse Bush. "I'm at peace with myself." That smug statement -- uttered by a man who had no idea what he was talking about and no interest in what anyone else believed -- could be the epitaph for his presidency.