HIV-positive since the '80s, I never expected to grow old -- and I really didn't expect to end up with a crooked penis. 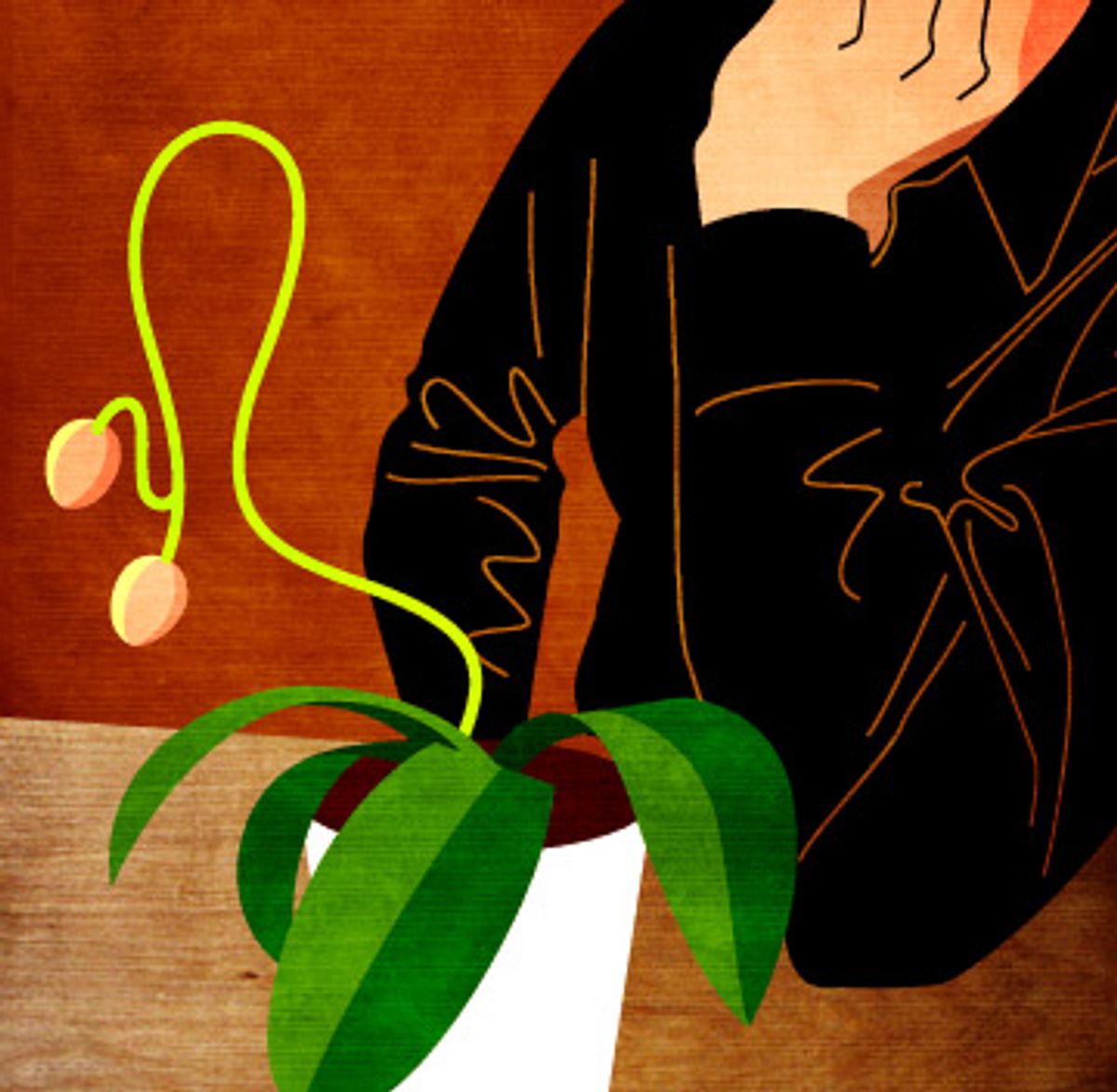 In 1968, when I was 15, my best friend and I swore to each other that we would never grow old. We even pricked our fingers and exchanged blood in the pact. True to his promise, Jon died at the age of 41.

Yet here I am, still. I jumped about 5 feet in the air the first time I stepped out of the shower, reached for the towel, and -- looking in the glass -- saw my 83-year-old father's body staring back at me: the same narrowed face, the same pigeon chest, the same skinny legs.

Aging is a bit more shocking to me than it might be to someone else, because I was never supposed to live this long. I've been HIV-positive since the AIDS epidemic "officially" began in 1981 -- although those of us who were first hit by it know that it started some time before then. In 1980, already, I was worried about what I'd read in the New York newspapers about "the gay cancer," which mystified everybody and seemed to have no origin or solution. I remember being alarmed because, in 1981, I burned my fingers on a cigarette, and the burn took forever to heal -- weeks and weeks, it seemed. From that time on, I haven't had a single day that wasn't lived at some level of trepidation, and, for many years, in a state of acute anxiety and fear.

Suddenly, in 1996 -- when my "clinical profile" was sinking swiftly to the grave -- medications came along that could, if taken properly, as prescribed, save your life, or at least prolong it. For all the relief I felt to be "saved," it was still a shock; after all, I had grown used to expecting an early death. Before the miracle of protease inhibitors and the "AIDS cocktail," I was on my way out. Then, in a split second, I was "Lazarus" (literally -- I was "Lazarus" columnist for Poz magazine).

I confess: I became an angry, agitated, irrational, bona fide, in-your-face, fuck-you, pain-in-the-ass agitator and activist (which I can still be -- watch out!). But mainly, now, I'm tired of it. All I notice are the skinny legs and the wasted muscles and a body that has aged beyond its years. Frankly, I think this is a bad joke, in poor taste. I think the least a person could do, after a quarter-century under the Sword of Damocles, is die, already. Only I don't want to die. I never did. If I flatter myself into thinking that my survival is due to stubbornness -- "piss and vinegar," as my father would say -- I still remember the others: Jon, of course, and so many of my friends. They didn't want to die, either, but they did. Forever young.

In the old days of "AIDS activism" we all compared the thing to a war -- not necessarily in the sense of two "sides" fighting each other, but in the sense of battling random, useless death. The Canadian novelist Timothy Findley wrote in his masterpiece, "The Wars," about an old lady who lived through the First World War. Looking back, she remembered the feeling of death all around her: "Every day another friend. And what I hate these days is the people who weren't there and they look back and say we became inured to it. Your heart froze over -- yes. But to say we got used to it! God -- that makes me so angry! No. Everything was sharp. Immediate. You met and you saw so clearly and cut so sharply into one another's lives. So there wasn't any rubbish."

Which still leaves me with the question, How did I get so old -- I, who was supposed to die with the rest, who never even imagined entering middle age? Indeed, when I was still living in New York, the therapist I had there -- who was himself HIV-positive and died not long after I left the city -- asked me if I thought I would live to see the age of 50. I said, truthfully, that I did not, not really understanding the question, as it seemed so far beyond possibility.

HIV-wise, I'm doing fine, superbly, these days -- "stunning results," no "detectable" viral load, "perfect CD4's," "wonderful percentages." My last lab report was so good that the doctors wrote me to say, "You are going to live for a long time yet, and have plenty more opportunities for misery!" I am, it appears, no different from anyone else. And, crazy as it sounds, this is very hard to accept when you've banked half your life on being a "special case." To find that you've wasted so much time worrying, and making excuses for yourself, when, in the end, you're just going to drop dead like anybody. If I ever get around to writing my memoir of the plague years, I'm going to have to title it "So, You're Not Going to Be a Tragic Hero, After All! Poor You!"

Now, after 11 years of "HAART" (Highly Active Anti-Retroviral Therapy), I find myself in the same position any man of my age would be -- "Monitor your cholesterol, don't smoke, don't drink. Eat right. Exercise. If you need help getting it up, we've got pills for that," and so on. OK, so I do suffer a few uncommon ailments: the nausea, for one thing, whenever I swallow the gallons of rarefied rat poison I need to take every morning. Then, too, there's a definite, proven "cognitive impairment" caused by both the virus and the pills. But could the same not be said about any person on chemotherapy? And if my body has aged and fallen apart to a large degree, it's because I never thought it would be worth it to "pump up" at a gymnasium. "Why?" I asked myself. "For whom?"

By the time I realized that it was for me, it was too late: The doctors had diagnosed me with gout. "Who am I?" I wailed to my doctors and friends, "Benjamin Franklin? Queen Anne?" The disease had such an antiquated sound, something that befell a stout, old historical character, not an HIV-positive literary biographer in the 21st century. Everybody laughed.

The gout business was irritating enough before my urologist added another ailment to the pile: Peyronie's disease. This news came in the wake of my first colonoscopy, which was a shock itself. I had gone to the urologist because my penis, when erect, had started to assume a scimitar curve, and other strange, contortionist shapes. ("It points north," as a friend of mine says: "You'll never get lost!")

The urologist looked at me with that doctor's expression that says gravely, "I'm afraid it's true," and, simultaneously, "Cheer up -- you have everything to live for!" As he explained, "You may have noticed that when you get an erection," he said, "it makes penetration difficult." I wanted to tell him that I wouldn't know, as it's been years since I've tried to "penetrate" anything or anyone, being HIV-positive. But I played along.

Peyronie's disease, the doctor then told me gently, is also called "partial penile disassembly." It is a condition of "uncertain cause," characterized by plaque, or a hard lump, or scar tissue, that forms in the penis and causes an abnormal curvature when the member is erect. Cases range from mild to severe. Peyronie's isn't "rare," exactly, but it's not "common" either. And it may or may not have anything to do with HIV or the medications.

"It afflicts men mainly in middle age," the urologist shrugged. "The sexual problems that result can disrupt a couple's physical and emotional relationship and lead to lowered self-esteem."

While I was stuck on the phrase "middle age," he carried on: "It's just the roll of the dice for middle-aged men. My guess is your penis has suffered some kind of trauma."

"Oh, Doc, you don't know," I answered, thinking of my whole checkered sexual history. "But the 'trauma' would have to have occurred some time ago, because my penis hasn't suffered anything in about three years."

Apparently there are only a few treatments for it, and my doctor tells me that none of them will work effectively for me. The first line of defense is massive doses of vitamin E, which the doctor can't, in good conscience, give at the levels he would normally prescribe, as vitamin E would contribute to "hepatic toxicity" (liver problems), brought on by the other pills I'm on. The second option is injections of some kind -- needles to the dick -- "which hurt like hell," the urologist said, "and they don't work, either." The third is penile implants, "but who wants a lead weight between his legs?" (I refrained from comedy here -- I knew all too well what he meant.) And the fourth, and most drastic, is surgery. "But I warn you," said the doctor, "you'll lose two or three inches. No more Peyronie's, but no penis, either."

In the meantime, the doctor gives me his own simple prescription: "I want you ejaculating all the time." It was a tempting thought, but I wondered how it was supposed to be accomplished, short of nights at the baths in the dark, since I have not voluntarily visited myself sexually on anyone in many years. Lamely, I stammered, "What is it about HIV infection you don't understand?"

Suddenly, the doctor became very calm: "Peter, all I'm saying is, if you want your weenie to look like something other than a compass or a pretzel, you'll do what I say. You can do the ejaculating on your own. But you must do it."

As I left the doctor's examining room, the receptionist addressed me. "He told you to jerk off a lot, didn't he?" she said, wincing.

So here I am, a middle-aged man with gout and a permanently crooked erection, commanded to jerk off (whether I want to or not). And yet I can't help thinking, Count your blessings, as your grandmother told you. Count your ejaculations, too, as Hemingway told you (he was afraid he might run out of them). And count me lucky to still be here under a bright sky in Vermont, when the wind in the trees is blowing in great, beautiful waves as summer turns to autumn, years after I pledged to Jon that we never would grow old.