This tale of filial love and family baggage is Wes Anderson's most heartfelt feature film yet. Its companion short, "Hotel Chevalier," is darn near perfect. 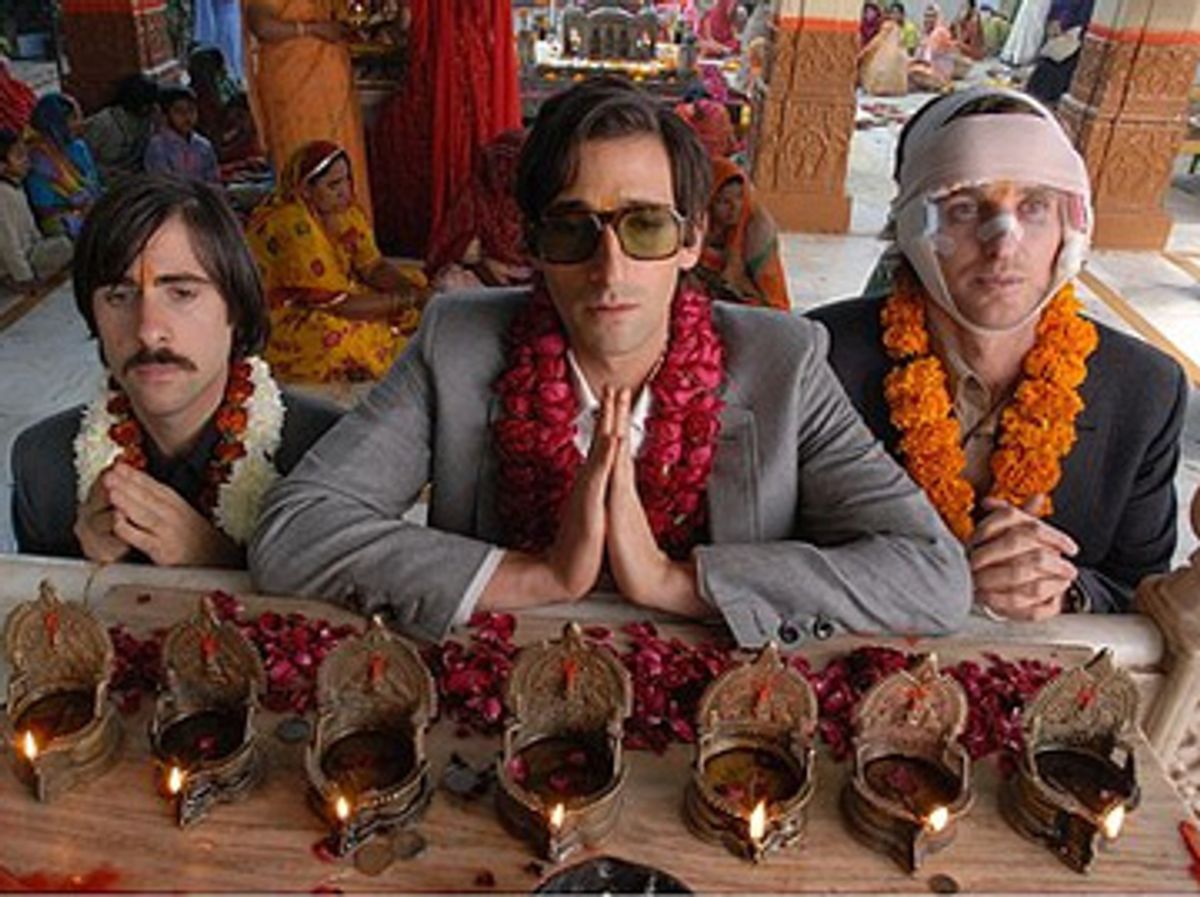 Wes Anderson's "The Darjeeling Limited" is a focused attempt to make a heartfelt director-to-audience connection: In an effort to regroup after their father's death, three brothers -- played by Owen Wilson, Adrien Brody and Jason Schwartzman -- board a train traveling through India. They swap drugs, ogle the pretty and, in the movie's eyes, "exotic" train attendant, and squabble. In Wes Andersonville, this is filial love, and although "The Darjeeling Limited" mostly suffers from the same jejune quaintness that Anderson's other movies do, at least it shows flashes of raw feeling. The picture is just naked enough that you want to wrap a blanket around it.

But not that naked. Anderson's movies -- the static, stilted "The Life Aquatic With Steve Zissou," the eccentric-family quirkfest "The Royal Tenenbaums" -- have always left me cold. I remain unmoved even by the aggressively fey charms of "Rushmore." "The Darjeeling Limited" -- which opens the New York Film Festival this evening, and opens elsewhere beginning tomorrow -- is the first of Anderson's movies that has elicited even the mildest scrap of affection from me: I feel warmly toward it, although I reserve the right to remain wary of its aging-hipster gimcrackery. It's as if Anderson, yesterday's next big thing, heard the homemade coffee-can drumbeat of new young DIY filmmakers like Andrew Bujalski and Joe Swanberg and realized that what the kids are into these days is shambling, sincere naturalism; his stock in trade, whimsical, deadpan irony, all meticulously orchestrated from the master control center of his brain, is starting to seem as outmoded as an old Mantovani record. Better inject some juice, and attempt at least an approximation of spontaneity, fast.

Maybe all artists do their best work when they're scared into it. "The Life Aquatic" met with a less-than-rapturous response even from many loyal Anderson admirers. And so to his credit, Anderson tries to push into new territory with "The Darjeeling Limited." Francis (Owen Wilson) has arranged a cross-country Indian train trip for himself and his two younger brothers, Peter (Adrien Brody) and Jack (Jason Schwartzman) -- although "arranged" might be too casual a word. He's planned the trip so carefully that he's even brought along a coordinator (played by Wally Wolodarsky) outfitted with a printer and a laminating machine: His job includes making plastic-coated cards for each day's itinerary, including visits to shrines and stops at local markets to purchase sundries like decorated leather slippers and pepper spray.

It turns out that Francis has suffered a terrible and unusual accident: His face is a map of bruises and bandages; a strip of gauze frames the oval of his face, Marley's Ghost-style. Peter and Jack feel sympathy and concern for him, but it's clear that his need to control and question their every movement drives them crazy. They rail at him; they roll their eyes at him; but eventually, a tragedy in the Indian countryside ends up bringing them all closer, and also leads to a reconciliation with their estranged mom (Anjelica Huston).

As the brothers gradually thaw their way out of the grief that's frozen them, and distanced them from one another, they're both endearing and wearying, in an upper-crusty Three Stooges kind of way: They clobber and pick at one another until they reach enlightenment. Schwartzman, formerly just an annoying actor, is finding ways to go deeper into characters that seem somewhat blank on the surface, and his timing just keeps getting better: He turns the intentionally awkward rhythms of the movie's dialogue into comically graceful, hippo-in-a-tutu pirouettes. Wilson, the controlling sad sack in this meandering little fable -- with his neuroses and his need for absolute, minute-by-minute orchestration, might his character be a stand-in for Anderson himself? -- turns an aggressively alienating character into one we can feel some kinship with. Or maybe it's just that his lazy drawl seduces us into liking him. Or it may be that it's simply impossible not to feel protective toward Owen Wilson right now, particularly since his character here shows the wounds and scars of what we can assume was a suicide attempt.

Brody, all Bambi eyelashes, gets a scene midway through the movie -- actually, it's mostly a single line -- that stops the whole enterprise cold and sends it in a wholly different direction. Brody, a reliably terrific actor, carries the moment with both gravity and ease. Anderson also knows how to use Brody's matchstick frame to great effect: Early in the movie he shows Peter running for the train in slow motion, his windmilling arms and legs suggesting the manic energy of a cartoon spider in a rush.

"The Darjeeling Limited" -- filmed on location in India -- is gorgeous to look at. Cinematographer Robert Yeoman doesn't just turn the lens on the countryside; somehow, he creates the illusion that the lens is actually drinking the landscape in. And the train itself, a quaint-looking, old-fashioned luxury affair, decked out in vivid cobalt blues and warm, sandy golds, is a pleasing little visual fillip in itself.

But in the end, "The Darjeeling Limited" only leaves you wondering what it all adds up to. The script is by Anderson, Schwartzman and Roman Coppola, and it does a better job than any other Anderson movie at wrangling with ideas about how the very things that drive us crazy about our families are also the things that bind us to them. When the movie slows down, and quiets down, it drifts momentarily into a landscape of real feeling. (As usual, Anderson does show a knack for using the right song in the right place -- in this case, it's the Rolling Stones' "Play With Fire," used as a backdrop for the movie's most resonant moment of reckoning.) But before long, Anderson is up to his old tricks again: His movies are more like Erector Set constructions than fluid narratives, and because it's easier to fill spaces with jokes and gags than with actual feeling, that's what he does.

Even when he's stretching toward warmth, as he is here, Anderson is still a maddeningly cool filmmaker. He's remote from his characters, which makes him remote from his movies. There's also a way in which he uses race as a novelty, suggesting an assertively white-kid view of the world. Jack flirts with that very pretty train attendant, Rita (played by Amara Karan), and eventually acts on his amorous impulses. But Rita isn't really a character here; she's treated as a pretty face who also happens to be a part of the local scenery. She's an outsider in the brothers' world -- but that doesn't mean she has to be an outsider in the movie.

The brothers' deepest connection appears to be a set of very expensive and quite wonderful matched luggage passed down from their late father, a passel of leather train cases and satchels each embossed with a design of monkeys, palm trees and gazelles. (These beautiful, lust-worthy props were created by Marc Jacobs for Louis Vuitton -- one of the advantages of being a filmmaker with friends in high places.)

But now that I've alluded to the idea of baggage, do we need a spoiler alert? Because you can bet Anderson isn't letting that luggage go to waste, metaphorically speaking.

"The Darjeeling Limited" has more heart than any other full-length Anderson movie. But I'm afraid it pales in comparison with the short, "Hotel Chevalier," that Anderson has made to be shown along with it. "Hotel Chevalier" is a sort of preface to "The Darjeeling Limited." Schwartzman, as Jack, is living in a hotel in Paris (out of a few of those fabulous suitcases), spending whatever money he's got (we can assume it's considerable) ordering up grilled-cheese sandwiches from room service. (He gamely asks the person who takes his order for the French word for "cheese.") A mysterious visitor comes to call, a pixie-vixen in the form of Natalie Portman. She and Jack clearly have a history together -- we don't know exactly what it is. There's awkwardness between them, but they do find their way into bed.

Somehow, the untold story of "Hotel Chevalier" is 10 times more interesting, and infinitely richer, than the one told outright in "The Darjeeling Limited." Short films are exceedingly difficult to pull off, but Anderson has made one that's very close to perfect. (It rivals even the craftsmanship and inventiveness of his terrific American Express commercial, which is a mini-masterpiece.) Maybe that's because, as a director, Anderson tends to be a maker of models, a builder of small things. The intimate scale of "Hotel Chevalier" suits him just fine, and perhaps the fact that the movie takes place in a luxe hotel room -- the most temporary but also the most comfortable of homes -- frees him as well. Maybe Anderson will always be a tourist in his own movies. But in "Hotel Chevalier," among the shortest of all his films, he unpacks his bags and stays a while. In this small movie, he finally finds a home away from home.