The sex scenes -- intense, affecting and emotionally raw -- are the best thing about this frustratingly limp movie. 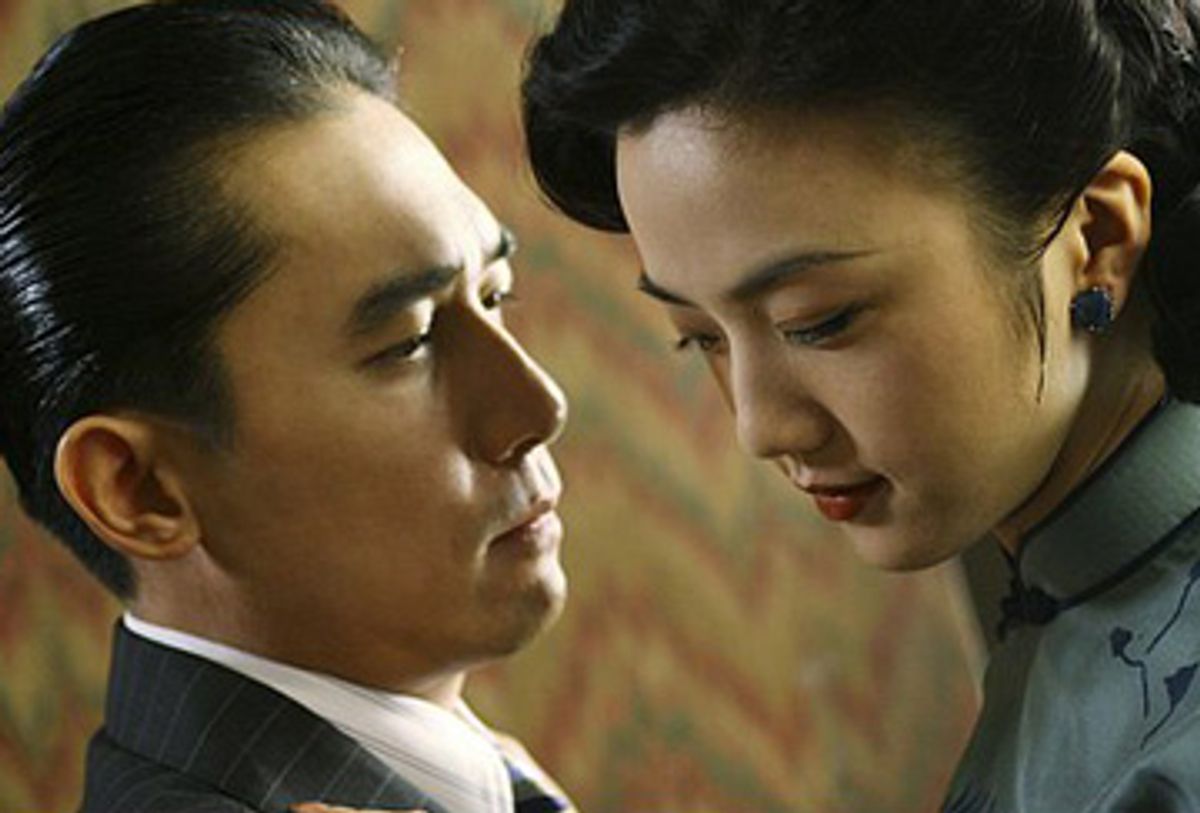 The Eileen Chang short story that's the basis for Ang Lee's "Lust, Caution" is as economical as a tightly wound ball of silk thread: Chang packs a lot of emotional yardage into a very small space as she examines, without ever conveniently demystifying, the complex relationship between a young spy in Japanese-occupied Shanghai and the dangerous government flunky she has been assigned to seduce.

There's no doubt Lee admires Chang's story; he quite possibly even loves it. But instead of doing the filmmakers' job of taking the source material and modestly adding a bit here and subtracting there, of focusing on certain pertinent details and reluctantly leaving others behind, Lee and screenwriters Wang Hui Ling and James Schamus have instead stretched Chang's admirably delicate story into a thin, underfed epic. "Lust, Caution" is one of the most frustrating pictures I've seen in a long time, because all its life is poured into the last third; most of what comes before is a long, deadly expository paragraph in which Lee declares his intention, in a snoozy stream of words and visuals, to make an old-style romantic melodrama set in a war-torn country. So why not just do it, already? Lee may believe he's seducing us, but all he's really doing is clearing his throat: He has confused foreplay with preamble.

"Lust, Caution" opens in Shanghai in 1942. A group of older women, and one young one, all of them dressed in clothes that suggest their suffering under the Japanese occupation is minimal, are gathered around a table for a game of mah-jongg. They complain about the impossibility of obtaining smuggled stockings; they admire one another's jewels and chatter away about the carat weight of this or that stone. The younger woman participates in the conversation, but to us, at least, she's clearly set apart from it. She's known to her friends at this table as Mrs. Mak, but her real name is Wong Chia Chi (played by a newcomer named Tang Wei).

Not long ago Wong was just a student, an idealistic girl who'd been recruited into a drama troupe formed to stir patriotism among the Chinese. And in the meandering, tiresome flashback that sucks the air out of the first two-thirds of "Lust, Caution," we get the whole story: We learn how the group's founder, fellow student Kuang Yu Min (Wang Leehom), hatches a plan to assassinate a powerful Japanese collaborator, Mr. Yee (Tony Leung). Wong, beautiful and innocent but clearly very intelligent, is chosen as the lure; she's a virgin, so one of her comrades clumsily initiates her into the world of sex, although it's obvious she figures out the real fine-tuning of what goes where on her own. Eventually, she ingratiates herself into the social circle of Mrs. Yee (Joan Chen) as a means of drawing the remote, businesslike Mr. Yee into an affair. The plan is that she'll earn his trust, giving the group its chance to off him.

The bones for a great movie are right there in the story, but Lee doesn't zero in on them. Instead, he spends more than half the movie rustling around in a cluttered drawer for them -- you can almost hear him muttering, "I know they're in here somewhere." Lee allows long gaps of silence to insinuate themselves unnecessarily between lines of dialogue. He lavishes a great deal of attention on several shots of Wong sitting in a cafe, dabbing perfume on her wrists: The detail is straight out of Chang's story, but there, it's fleet and concise; Lee stretches it out, crushing it by attempting to load it with importance.

"Lust, Caution" (shot by Rodrigo Prieto) at least has a suitably retro-dreamy look: This is a tasteful-looking picture, one that seems to have been buffed to a soft glow, like a piece of mellow vintage brass. And Lee couldn't have chosen more perfect actors for these roles. It's always a pleasure to watch Joan Chen. She doesn't have much to do here, but playing an aging, possessive beauty, she still manages to cast a quiet spell over the picture. Tang, with her fine features and always-questioning eyes, plays the seductress Wong with a deft balance of delicacy and toughness. She'd need to have both of those things in luxurious quantities to stand up to Leung. He is one of the finest actors in Asian cinema, and if nothing else, "Lust, Caution" may at least bring him a wider, more appreciative audience in the West.

Leung's performance is less moodily romantic than any of those he has given in his work with Wong Kar-Wai (including "Chunking Express" and "In the Mood for Love") -- but here, he pushes beyond romanticism into far more unsettling territory. His Mr. Yee is at first unreadable, like a distant danger signal at sea that we can't quite make out through the fog. But later in the movie, as Mr. Yee's relationship with Wong grows and deepens (sexually and otherwise), he gradually slips into focus. This may be the most unlikable character Leung has ever played -- he's such an appealing presence that you can't imagine any director asking him to convey the ruthlessness that this role demands. But Leung pulls off the nearly impossible, making us feel sympathy for a man driven largely by selfish impulses, a man whose cruelty is almost dissolved by love -- but not quite.

The love scenes in the last third of "Lust, Caution" are intense, affecting and beautifully filmed; they're also emotionally raw in a way that's surprising in a film that's otherwise so ponderous and inoffensive. One of the sex scenes essentially depicts a rape; later, the sex is consensual, and Lee shoots these scenes in a way that's unapologetically erotic, not just safe and "pretty." In these scenes, Mr. Yee and Wong play out a world of aggression in bed, perhaps directed not so much at each other as at the unruly, dangerous universe they're living in -- when they lash out and claw and bite, it's almost as if they're relieved to come into contact with real human skin, instead of just elusive, maddening air.

As much as I approve of gratuitous sex in the movies, I concede there's something rare and wonderful about sex scenes that actually illuminate the relationship between two characters, as those in "Lust, Caution" do. Those sequences have also earned "Lust, Caution" an NC-17 rating from the chuckleheads at the MPAA ratings board, and I think I understand why: The sex scenes are the strongest, most moving and most significant portions of Lee's movie, one place where his obsessive attention to detail actually serves him well instead of just clouding his judgment. Those scenes aren't so much explicit, or even sexy, as they are emotionally naked -- which, of course, is what the ratings board is really afraid of. I wish the rest of "Lust, Caution" were worthy of those scenes, and of the performances given by the actors. But I'm so glad that Lee didn't cut his movie for American release. (He did cut it for the Chinese authorities, and while I wish he hadn't capitulated, we all know those battles are harder to fight.) "Lust, Caution" is in so many ways a timid, overworked picture. But at least it has balls where they count.