Slick P.R. moves around the '08 Olympics can't hide the fact that China is still complicit in the Darfur genocide. 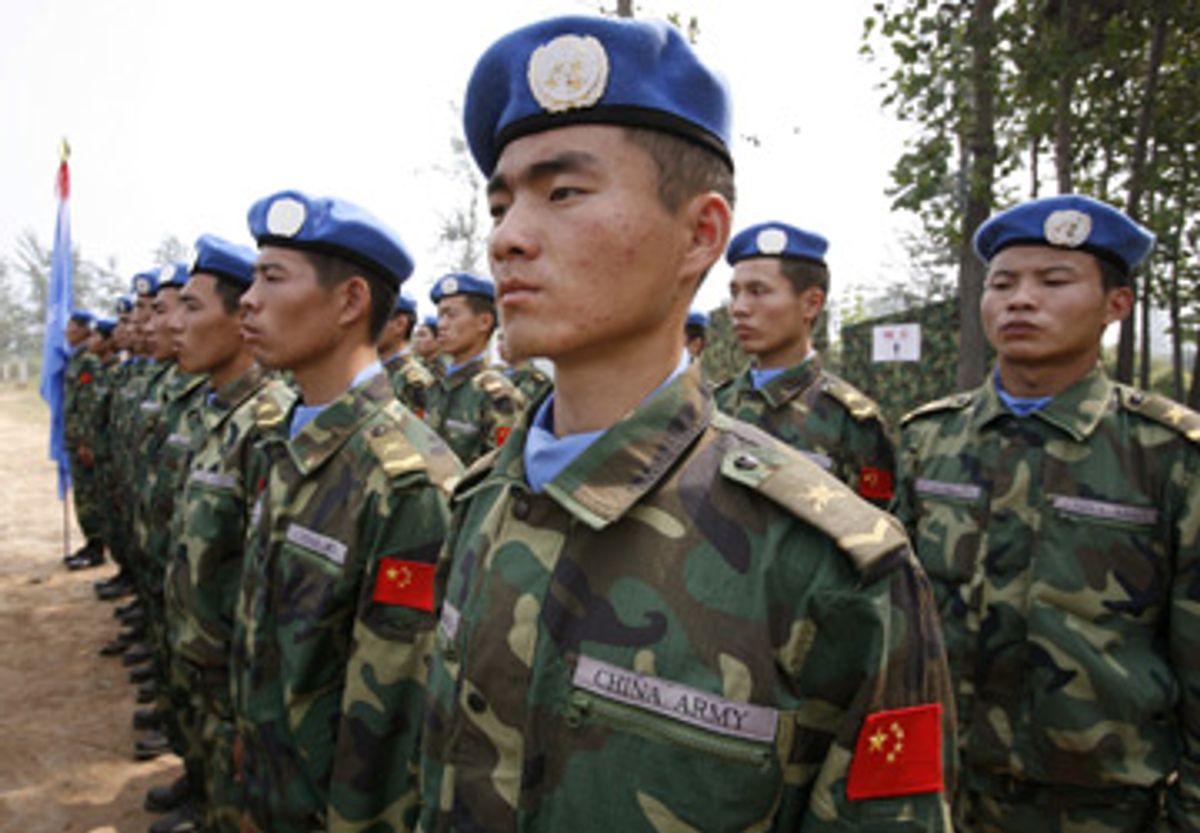 The Chinese government can be very persuasive when it wants to be. China persuaded the International Olympic Committee to award Beijing the 2008 Olympic Games -- marking the first time in more than 20 years that the Games will be held under an authoritarian government.

Now, China is attempting to persuade world leaders, the media and the public that Beijing has suddenly become a leader for peace in regard to Darfur. But there are many signs that China's recent efforts have been little more than a public relations campaign to spare the Olympic host from continued negative publicity about its complicity in the Darfur genocide.

For four long years, China was a major, if not the chief obstacle to international efforts to bring security to Darfur. Beijing blocked, vetoed or diluted resolutions at the U.N. Security Council that would have authorized a protection operation or sanctions on Khartoum for continued intransigence.

Suddenly this spring -- as China's role in Darfur was discussed publicly in light of the upcoming Olympics -- China took some new, high-profile steps to address Darfur. Beijing appointed a special envoy for the region. It announced that it would send 300 engineers to Darfur, and in a major turnaround China voted on July 31 for a U.N. resolution authorizing an African Union-United Nations "hybrid" force of up to 26,000 troops and police for Darfur.

Beijing insists -- in media interviews and in face-to-face meetings with Darfur advocates, including myself -- that its new and improved positions on Darfur have not come in response to pressure from activists pointing up the hypocrisy of simultaneously sponsoring a genocide in Africa and an Olympics at home. Beijing has said its position on Darfur is based on principle.

But if China's Darfur policy is indeed based on principle rather than public relations, there is far more it could do to help bring security to Darfur. It could begin by speaking honestly about the realities on the ground there. After a visit to Darfur in May, China's special envoy Liu Guijin said, "I didn't see a desperate scenario of people dying of hunger." Rather, Mr. Liu said the people of Darfur thanked him "for the Chinese government's help in building dams and providing water supply equipment."

Since then, in fact, the security situation in Darfur has gone from bad to worse. Humanitarian organizations are pulling out their personnel, and African Union forces were recently attacked and killed by a splinter group of rebels.

China could put a moratorium on oil ventures with Khartoum. Beijing contends that its purchase of oil from the regime in Khartoum -- more than $1 billion each year -- and its massive investment in infrastructure should be viewed as entirely separate from the violence and murder in Darfur. But it is oil revenues from China that continue to fuel the Sudanese regime's buying of planes and bombs, and its backing of hired killers, the Janjaweed.

China could suspend arms sales to the Sudanese regime, and demand that all other nations follow suit. Human rights reports document that weapons sold by China to Khartoum have been used against the innocent people of Darfur. This fact is all the more troubling given that by selling arms to the regime, China is recouping some of the money it spends in Khartoum buying oil.

China could publicly urge the regime to disarm the Janjaweed and cease aerial bombing campaigns. It could also criticize the Sudanese regime's harassment of the world's largest humanitarian operation -- and cry foul when humanitarian workers are ousted, as happened recently to the director of CARE in Sudan.

While China has widely touted its U.N. vote for the "hybrid" force, it has of course been silent about the central role Beijing's diplomats played in weakening the resolution -- by stripping provisions that would have applied sanctions and provided a mandate to disarm threatening combatants.

China was persuasive enough to convince the international committee that it is worthy of being an Olympic host. Now it must act like one, and live up to the grand slogan it has chosen for the '08 games -- "One World, One Dream" -- especially when the stakes are so much greater than athletes winning medals.

Jill Savitt is director of the Campaign Department at Human Rights First.