Philip Roth's aging alter ego returns to New York to confront his unrealizable lust and his fear that "reading/writing people" may be finished. 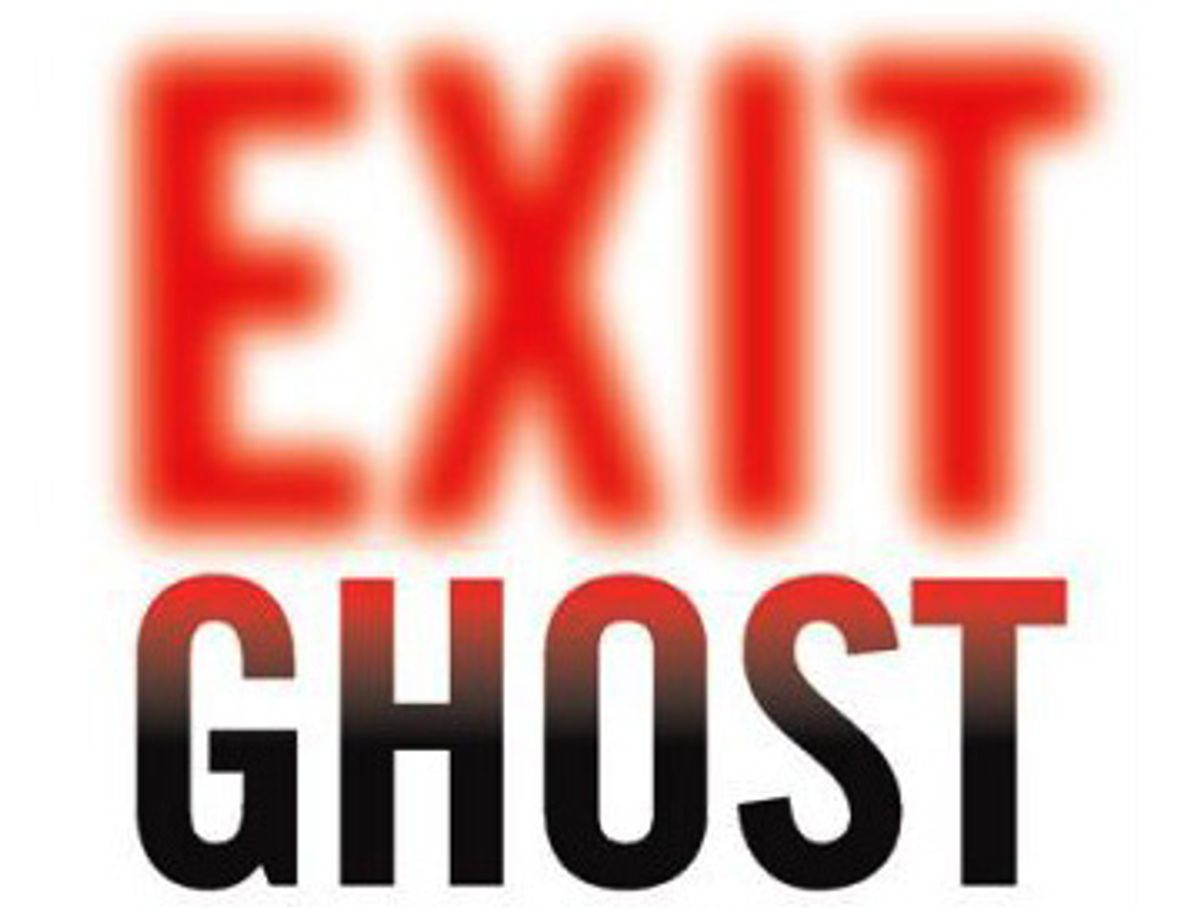 You don't look to Philip Roth for the sentimental, and "Exit Ghost" -- starting with its curt, dismissive title -- is not what you would call a five-hanky farewell to the author's celebrated character and alter ego, the novelist Nathan Zuckerman.

Reading the novel in a restaurant empty but for two young waitresses, I was almost embarrassed to be seen with it. Between the bleak title on the front (the word "exit" in red, as in a movie theater) and, especially, the photograph of the author on the back (steely eyes boring right through you, on through the human condition, and from there to parts unknown) -- well, it just seemed so old school.

Although Zuckerman played a peripheral role in the acclaimed trilogy of novels Roth turned out at the end of the last century -- "American Pastoral," "I Married a Communist" and "The Human Stain" -- he has not taken center stage since 1986's "The Counterlife." "Exit Ghost" suggests that time has not just taken its customary toll on Zuckerman -- it's taken a great big whack. It has also removed his cancerous prostate, rendering this most priapic of novelists (in "The Anatomy Lesson," he enjoyed no less than four mistresses) not only 100 percent impotent, but also incontinent. He wears absorbent padding in his underwear, and when he forgets to change it, he smells.

"I hadn't been in New York in eleven years," Zuckerman announces in the opening sentence of the novel, set during election week of 2004. "Other than for a surgery in Boston to remove a cancerous prostate, I'd hardly been off my rural mountain road in the Berkshires in those eleven years and, what's more, had rarely looked at a newspaper or listened to the news since 9/11, three years back." His pared-down existence, gradual accommodation to solitude, and his relationships with his few friends and neighbors are sparingly, but movingly, described. In some ways they are the best part of the book.

Yet Zuckerman is Manhattan-bound, to see a surgeon who holds out hope for a cure for his incontinence. The visit leads to two consequential encounters. The first is with Amy Bellette, the former mistress of his literary hero, E.I. Lonoff, both of whom appeared in Roth's initial Zuckerman novel, "The Ghost Writer" (1979). Lonoff is long dead and Amy, with whom the young Zuckerman was smitten, has brain cancer.

The second encounter comes after Zuckerman picks up a copy of the New York Review of Books and sees an ad in the back that might have been written expressly for him: A couple, both writers, want to exchange their comfortable Upper West Side apartment for an isolated house in the country. Seized by hope that the surgery will be successful (though he feels certain it won't be), and by a last-gasp bout of metropolitan nostalgia, Zuckerman calls the couple straightaway. Invited over, he falls instantly for the wife, Jamie Logan, a rich, sexy Texan in her early 30s who hails from Houston oil money, but is fiercely, at times hysterically, anti-Bush. (This is election week, remember.) It is her idea, not her husband Billy Davidoff's, to leave the city. "We're leaving," she says stiffly, "because I don't wish to be snuffed out in the name of Allah ... Bin Laden dreams only of evil, and he calls that evil 'New York.'"

Zuckerman is once more in the thick of political fever, has witnessed the return of his own impotent, unrealizable lust, is about to forge, through the ailing Amy Bellette, a renewed connection with the literary idol of his youth and is both rejuvenated and saddened by his own Rip Van Winkle fascination with what has become of New York in his 11-year absence. He focuses much of his attention on the emergence of cellphones, wondering "what had collapsed in people to make incessant talking into a telephone preferable to walking about under no one's surveillance, momentarily solitary, assimilating the streets through one's animal senses ... For me it made the streets appear comic and the people ridiculous. And yet it seemed like a real tragedy, too."

Roth's Zuckerman tirades have generally been characterized as curmudgeonly, but that seems unduly harsh. "Tired" might be a better word, in that he contributes no fresh insights. But then, as someone coming across cellphones almost for the first time, at least as used en masse, perhaps it's contextually appropriate that Zuckerman's thoughts on the matter -- the loss of interiority, the grotesque blurring of public and private behavior -- are the same as ours once were, until we chose to shelve them. Still, it's a shame he was unwilling or unable (failing literary powers being a prominent theme) to let fly with a truly coruscating satirical blast at what Time Out memorably called "New Dork City."

Unfortunately, there's a lot that's tired about the book. The depiction of liberal New York's grief following Bush's reelection is like reading a novelized Frank Rich column, and even Frank Rich fans have read enough of those. Worse, great chunks of the narrative are broken off so that Roth can engage in an imaginary dialogue (a kind of play-within-the-novel, with sharklike erotic purpose) between Zuckerman and his busty Texan muse. Divided into sections baldly marked "He" and "She," they do little to enliven Jamie the character -- except for her top-notch breasts, she always seems blurry -- and attest only to Zuckerman's fierce, undying inquisitiveness: seduction by interrogation.

Nonetheless, this is a novel by Philip Roth, and there are gems, as in his description of Richard Kliman, a friend of Jamie's who wants to write a biography of Lonoff, exposing his great "secret" -- a three-year incestuous relationship with his older sister. Zuckerman loathes Kliman, who is young, virile and ambitious -- everything Zuckerman once was -- and enviously describes him as "savage with health and armed to the teeth with time." The fact that you can see those teeth, time and armor in one, ready to chomp on rocks if need be, reminds you that Roth is still a great writer.

And what of "the writer"? If Zuckerman feels like a "ghost" preparing his exit, it is because he no longer feels relevant on either a personal or cultural level. Amy, who claims to be in communication with Lonoff in the afterlife, says she has received the following message from him: "Reading/writing people, we are finished, we are ghosts witnessing the end of the literary era." As usual in Roth, there's an alternative explanation: Since brain cancer has left Amy half-demented, that may just be her tumor talking. That Roth may not be as pessimistic about the literary future as Lonoff is also suggested by the fact that it's Jamie, the young, contemporary writer, who, one page from the end, comes closest to summarizing everything that has come before. Chastizing Zuckerman for "having lost all sense of proportion" and acceding to "unreasonable wishes" when he asks her to visit him in his hotel room, she nonetheless admits that behaving unreasonably "is what it is to be in life, isn't it? What it is to forge a life. You know your reason can reassert itself at any time -- and if it does, there goes life and the stability that is life."

It's a bleak diagnosis. We can only be ourselves by not being ourselves, oscillating endlessly between sense and folly, never fully at home in either, until death ends the argument.