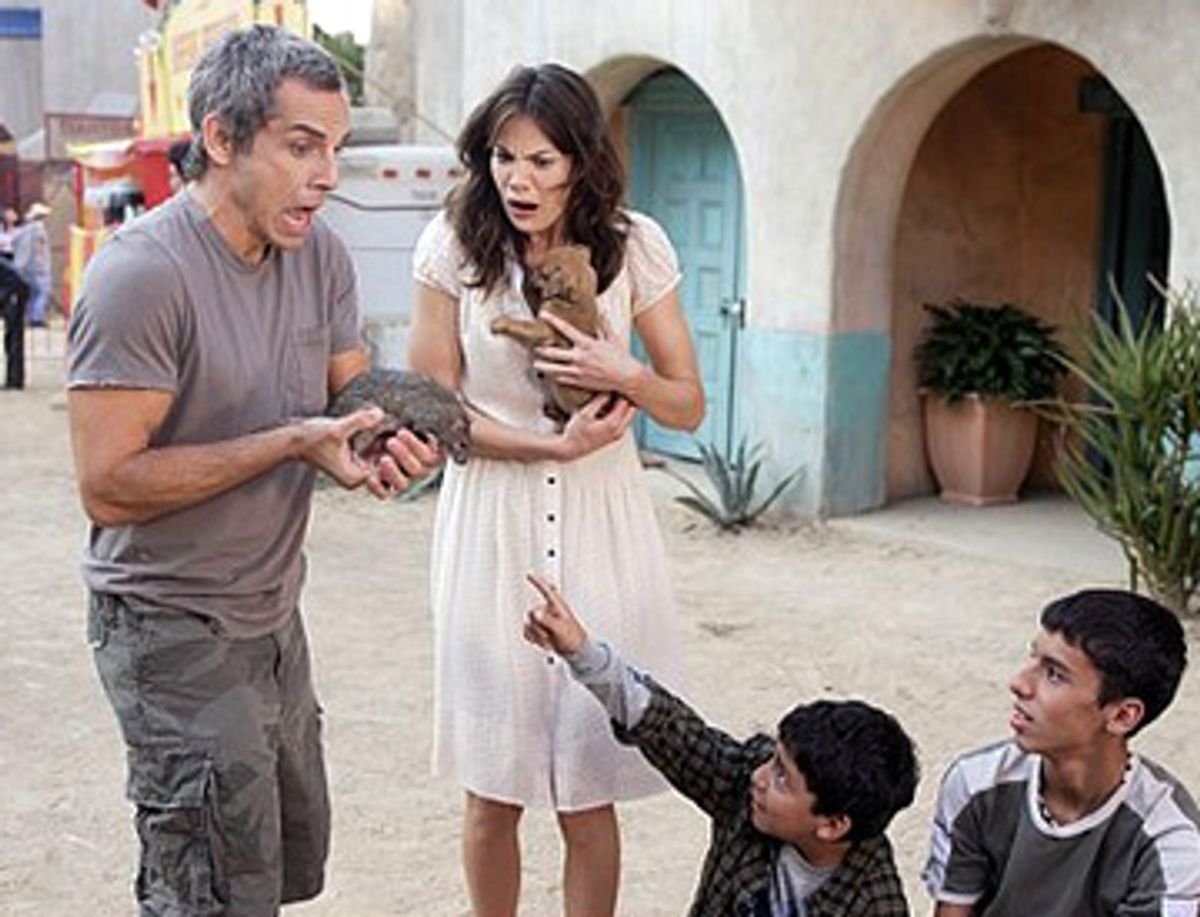 Peter and Bobby Farrelly's remake -- if you can even call it that -- of Elaine May and Neil Simon's "The Heartbreak Kid" marks the first time in my life I haven't laughed at Jerry Stiller. And around the 100th time I haven't laughed at his son, Ben. Stiller the younger plays Eddie Cantrow, a 40-ish guy who meets and rather hastily marries the woman of his dreams, a leggy blonde named Lila (Malin Akerman, who's nothing if not a good sport, considering the paces the Farrellys put her through here). His dad, Doc (the generally marvelous comic Jerry Stiller, uncharacteristically crass and forced here), approves: He's obsessed with how much action his son has been getting -- or, more accurately, not getting -- and has been gaining a bit too much mileage out of certain words used to describe one part of the female anatomy: It isn't funny the first time he says it, and less so the sixth.

But when Eddie and Lila head to Cabo for their honeymoon, Eddie discovers his bride isn't everything he'd hoped for: She sings, in a loud and annoying fashion, along with the radio. A former cokehead, she has a deviated septum, so liquids tend to spurt out of her nose in a wholly disgusting manner. She doesn't have a real job. Worst of all, from Eddie's point of view, she's an exceedingly flexible, aggressive tigress in bed, and all Eddie really wants is a nice, conventional 10 or 15 minutes spent in the psychological and physical security of the missionary position.

When Lila is temporarily bedridden with a terrible sunburn (she insisted on using mineral oil instead of sunblock! Grounds for divorce right there), Eddie ends up meeting Miranda (Michelle Monaghan), the real woman of his dreams. She's a lacrosse coach; that's great, because he owns a sporting-goods store. She smiles a lot and doesn't wear much makeup. She cavorts on the beach in a modest tankini instead of lying on a lounge chair clad in tiny triangles of leopard print. And you can just bet she'll be a totally nice, nonthreatening bedmate -- not like the saucy slut Eddie had the misfortune of marrying.

"The Heartbreak Kid" is one of those so-called remakes that stray so far from their source material that they practically enter another galaxy. The original, directed by Elaine May from a Neil Simon script (based on a short story by Bruce Jay Friedman), was a more bitter than sweet, and very funny, exploration of how the things we think we want aren't necessarily the things that will make us happy. Charles Grodin plays the mercurial groom as a putz with a passive-aggressive streak; the bride he tires of so quickly is Jeannie Berlin (May's daughter), a robust, well-meaning girl who earns our sympathy early on -- which doesn't mean we don't wince as we watch her tucking into an egg-salad sandwich, which she chews with her happy mouth wide open, flecks of egg clinging to her chin and lips. Cybill Shepherd is the dream girl; her surly, protective father, in a marvelous, sharply pointed performance, is Eddie Albert. The original "Heartbreak Kid," released in 1972, is one of those nearly perfect comedies that scare you a little even as they make you laugh; it cuts a bit too close to some uncomfortable truths.

This updated "Heartbreak Kid" borrows the basic premise of the original and little else. (The script is by Scot Armstrong, Leslie Dixon, Kevin Barnett and the Farrellys; the picture is a veritable Volkswagen stuffed with writers.) It would be bad enough if the picture was just unfunny; but it also has an unpleasant, mean-spirited sheen, with none of the Farrelly sweetness we got in pictures like "Shallow Hal" or "Stuck on You." The movie creaks and groans under a load of uncharitable jokes (including a supercheap fat-person gag), and operates in some weird retro fantasyland in which women who like sex are sleazy, while sunny gals who turn cartwheels on the beach and wrinkle their noses adorably are real wife material.

The delightfully crazy streak Monaghan has shown in pictures like "Kiss Kiss Bang Bang" has been muted here: She gives off a tepid elfin glow. Rob Corddry, as Eddie's best friend, and Danny McBride, as Miranda's protective, vaguely menacing cousin, have some funny bits; they resuscitate the movie temporarily whenever they're on-screen.

But Ben Stiller, the movie's star, pretty much sinks the whole enterprise. Stiller's character isn't supposed to be particularly likable. (Grodin's sure wasn't.) But if we're going to spend nearly two hours suffering through a character's neurotic agonies, we need to feel some stake in what happens to him. Stiller is a tense, mechanical actor; it seems to take him a great deal of effort to stretch his lips into a smile, and the result is a stressed-out grimace, the kind of thing you might see on a carelessly painted Day of the Dead figurine. His timing is sharp and precise, but his charmlessness stubs out any pleasure we might take in it. His Eddie doesn't deserve a nice girl like Miranda, or even a jobless ex-coke fiend and bad singer like Lila. The movie's final scene -- a bitter little joke at Eddie's expense -- comes close to acknowledging that. But by that time, we've already had too much time to wonder what on earth we've ever done to deserve him.