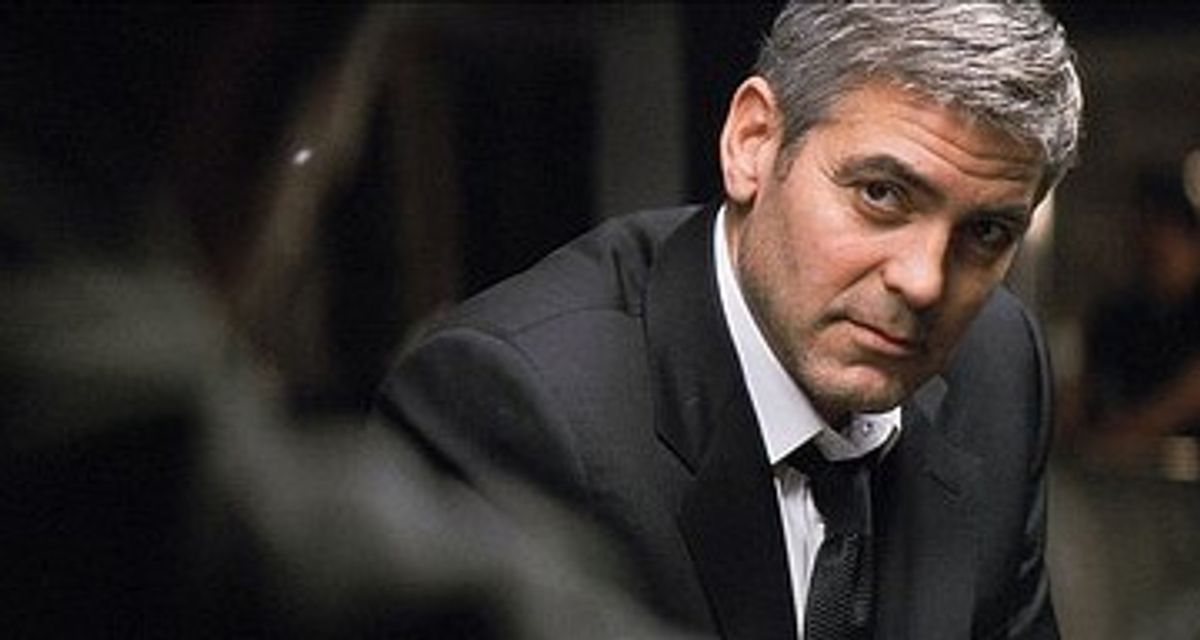 The muckraking social drama has a long, proud tradition in American movies, from "I Am a Fugitive From a Chain Gang" to "Norma Rae" to "Erin Brockovich." The pleasures of movies like these are simple and straightforward: When we know we're on the right side of the argument, it's deliciously gratifying to see the bad guys get it.

That's the essential appeal of Tony Gilroy's "Michael Clayton." Although Gilroy isn't new to filmmaking -- he wrote or co-wrote the scripts for all three Bourne films, "The Bourne Identity," "The Bourne Supremacy" and, most recently, "The Bourne Ultimatum" -- this is his directorial debut, and it's a confident, well-tailored piece of filmmaking. It's also conscientious to the point of being wearying: The plot hinges on an evil pesticide company (it bears the beautifully sinister name "U/North") whose executives have worked hard to hide the fact that their product is poisoning the farms where it's being used, as well as, of course, the families living on those farms. Tilda Swinton plays Karen Crowder, U/North's powerful in-house counsel, who will protect her company (and her career) at all costs. Tom Wilkinson is Arthur Edens, a senior litigating partner at Kenner, Bach & Ledeen, the fat-cat law firm that's representing U/North in a jillion-dollar class-action lawsuit.

After years of trying to protect a company he knows is in the wrong, Arthur has begun to crack up: He starts babbling and removing his clothes during a crucial meeting with the client. Luckily, the firm has in its employ a calm, cool "fixer" -- his name is Michael Clayton, and he's played by George Clooney -- to clean up just these sorts of messes. Michael is also Arthur's friend, and it pains him to see the guy unraveling, although he's shouldering his own share of personal troubles as well: He's deep in debt after trying to bankroll his brother's failed bar and restaurant; a sometime gambler, Michael has to fight the temptation of the tables when he needs to make quick dough; and even though we can see he's an essentially principled guy, it's beginning to dawn on him that the work he's been doing for a living may be something he's no longer able to live with.

Gilroy (who also wrote the script) shows a knack for certain kinds of dramatic flourishes. In one nicely staged scene, Michael, after a late-night meeting with one of the firm's clients (this well-heeled joker has just left the scene of an accident), drives down the kind of perfectly groomed suburban-slash-country road that you see only in places where rich people live. He stops the car and gets out: He's seen a group of horses standing on a ridge in the early-morning light, and he approaches them cautiously, with a sense of wonder and curiosity. They sniff and snuffle at him. Something is about to happen, but we don't know what. The scene has the proper amount of suspenseful gravity; its sense of dread hangs in the air like mist. (Director of photography Robert Elswit's camera practically captures it.)

But the picture is so honorable, so sincere, that it trundles along dutifully and rather dully. Most of the supporting performances are of the sort that get heavily praised for everything we can see the actors doing; the performers don't always pull off the far subtler achievement of building a character layer by layer. Swinton gives a meticulous performance that's all about meticulousness: Her Karen Crowder is the sort of slick, determined woman who strides into a life-or-death meeting looking as cool as a cuke, even though sweat is gushing from her armpits. (Though in this case, we get to see the sweat.) The performance is fine at first, but by the time we see Karen laying out her pantyhose on a hotel bed the night before a big meeting, smoothing them as if they were a sort of ceremonial garment, the ritualistic quality of her gestures has become a bit much. The same goes for Wilkinson, a good actor who gets stuck with the role of the normally staid professional who goes crackers after failing his moral obligation. It's not a terrible performance; it's just the sort of holy loony role ("I am Shiva, the god of death!") that no actor can survive.

The chief reason to see "Michael Clayton" -- aside from the exhilaration of the climactic payoff -- is Clooney's performance. Clooney is cast as the movie's conscience, and it's much harder for an actor to play a noble quality than a character. But Clooney pulls off the performance beautifully, perhaps partly because he's so casual about it. He doesn't come at the role as a matter of life-and-death import, which is what makes it so affecting and why it cuts so deep. As a performer, Clooney is a great listener first and foremost; he understands that the reaction must always come second. And so even though Clooney has plenty of lines in "Michael Clayton," the performance is built on the way his character takes in, and processes, information: We can see it all play out on his face, in the way he arches an eyebrow or betrays just a ghost of a frown.

Clooney has a face made for chiaroscuro, and Elswit and Gilroy seem to know it: He's often lit in high-contrast extremes of shadow and light, a visual metaphor for Michael's increasing discomfort with the equivocating and truth-mangling his job demands of him. This is one of the great performances of the year, an unflashy turn that comes to mean even more after the movie is over, a performance that makes you think about what you've just seen rather than instantly banish it. In a movie climate where big-studio releases churn ever more quickly through the theaters, the vitality of certain performers, like Clooney, becomes more important than ever. He may be the star of "Michael Clayton," but his performance is all about undercurrents. Instead of taking control of the movie in any overt way, he commands our attention by swimming just beneath its surface. He's a disappearing act with staying power.