"No Country for Old Men"

This adaptation of Cormac McCarthy's novel touches on brutal themes, but never really gets its hands dirty. 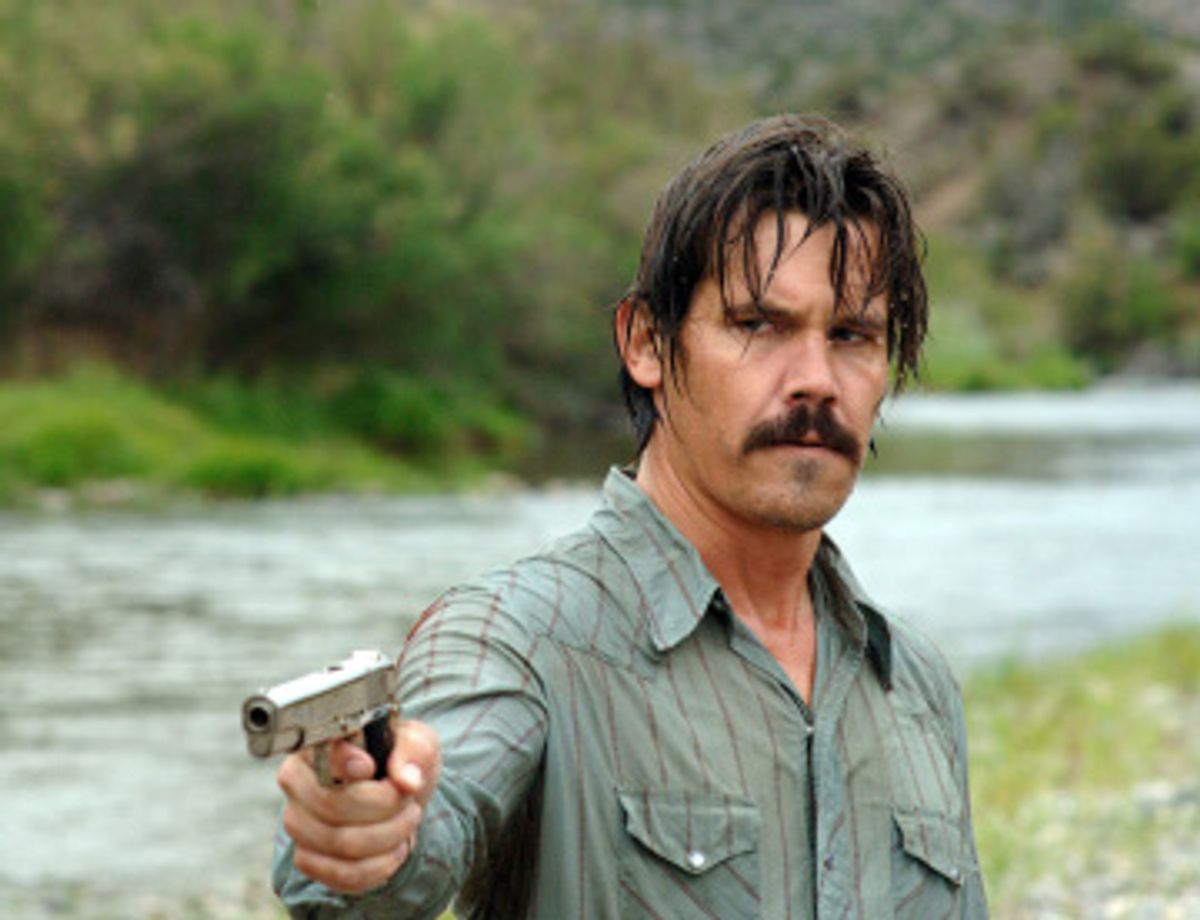 Ah, the American West. It ain't what it used to be. Instead of horses and stagecoaches, it's all trucks carrying loads of dope and money over the border; instead of old-timey dry-goods stores stocked with flour, calico and ribbons, it's all quick-stops selling soda and packages of peanuts; instead of bad guys in black hats, it's all bad guys in weird Dutch-boy haircuts. Still, there are men -- rough, timeworn men -- who uphold decency, who hang onto sturdy values of honor. And funnily enough, they almost always look like Tommy Lee Jones.

"No Country for Old Men," Joel and Ethan Coen's adapatation of Cormac McCarthy's novel is a parched meditation on this changed West, an oblique thriller in which an enigmatic bad guy (played by Javier Bardem) stalks rumpled, dusty-booted cowboy Llewelyn Moss (Josh Brolin), who has stumbled upon and made off with a suitcase full of cash that also contains a hidden transponder that alerts the villain to his every move. Bardem's character has an outlandishly made-up-sounding name, Anton Chigurh (Gesundheit!), but he stomps through the movie like a nameless ghost. He also wears one of the most absurd haircuts ever committed to film, a kind of Prince Valiant bob, minus the fringe. And he's a nasty piece of work, all right: He kills ruthlessly and thoughtlessly, loading bullets into people's heads seemingly just for kicks. Existentialist to the max, he tosses a coin to determine whether or not he'll spare the life of the owner of a small convenience store. Eventually, he gets ahold of a pressurized thingie used to stun and instantly kill cattle, and you can imagine how much taciturn glee -- this is not a smiley guy we're talking about here -- he gets out of popping the thing off on people's foreheads, zonking them into the sweet hereafter.

As he hoofs it after Llewelyn, a disillusioned sheriff, Ed Tom Bell, played by -- who else? -- Tommy Lee Jones, hoofs it after him. Against this backdrop of ruthless killings and overall creepiness, Sheriff Bell ponders the meaning of existence and other stuff, which would be pretty boring if not for the occasional distraction of human life being snuffed out by cattle-slaughter devices.

"No Country for Old Men" is designed, and shot (by the Coens' frequent collaborator, Roger Deakins), to seem poetic, enigmatic and -- in the Coen manner -- grimly funny. The story unfolds in a somber west Texas landscape, a place so bleak that, hot as it is, it somehow has the power to freeze men's souls. (It's worth noting that although the movie takes place vaguely in the modern day, it doesn't have a strictly contemporary setting -- there's a late-'70s vibe to it, and the transponder used to track the money is a somewhat quaint touch.) Early in the picture, when Llewelyn stumbles across a huddle of dead drug dealers in the desert, the camera fixates, more than once, on a dead dog lying in the sand: We've entered a world of heartlessness, and if you don't get that message in the first 10 minutes, don't worry, you'll have plenty of other chances to catch up. "No Country for Old Men" is a thriller, although the plot points often connect only tangentially. It's not supposed to add up in the end, and we're not supposed to read its plot twists and turns all that literally. This is really a movie about the hearts and lives of Men, capital M, a metaphor for the way the old signposts of masculinity -- those phallic wooden things you could always find here and there to tie your horse to for a spell -- have all but disappeared in today's world.

That's not necessarily a bad subject by itself; Sam Peckinpah certainly made some great pictures mining variations on it. But it doesn't work so well when it's filtered through the Coens' knowing, self-aware lens. The movie's violence isn't pulpy and visceral, the kind of thing that hits like a fist; it's brutal, and rather relentless, but there are still several layers of comfortable distance between it and us. At one point a character lifts his cowboy boot, daintily, so it won't be mussed by the pool of blood gathering at his feet.

That's a funny touch, but it also unwittingly calls the bluff of the movie around it. All of the men in "No Country" -- even the one who's very, very bad -- are touched in some way by the violence around them; the actors seem to understand that better than the filmmakers do. Brolin plays Llewelyn as a sun-toughened man of few words who's just pretty damn glad to have found a suitcase full of money; he clearly wants to use it to build a better life for his wife, Carla Jean (the Scottish actress Kelly McDonald, who's the most believable and sympathetic figure in the movie), although he knows damn well it didn't come from any "clean" place. Anton Chigurh obviously has his own schemes for determining whom he wants to kill, and why -- he's principled in a psychotic kind of way, understanding perhaps better than anyone else that every act has consequences. (Bardem gives a pretty creepy performance, but few actors could survive that haircut.) Sheriff Bell is a pained, careworn creature: Jones is always good (perhaps too good) at playing guys who are crusty on the outside but wounded on the inside. Woody Harrelson shows up, briefly, as a symbol of male bravado -- and you can guess where that gets him.

The Coens have often used cruel violence to make their points -- that's nothing new -- but putting that violence to work in the service of allegedly deep themes isn't the same as actually getting your hands dirty. "No Country for Old Men" feels less like a breathing, thinking movie than an exercise. That may be partly because it's an adaptation of a book by a contemporary author who's usually spoken of in hushed, respectful, hat-in-hand tones, as if he were a schoolmarm who'd finally brought some sense and order to a lawless town. I know people who adore McCarthy's prose, but I've always found it to be like particleboard artfully molded to look like warped and worn-down planks, less weatherbeaten than worked over. "No Country for Old Men" is what seems to pass these days for a successful adaptation: It's authentic in the same shop-class-project way.