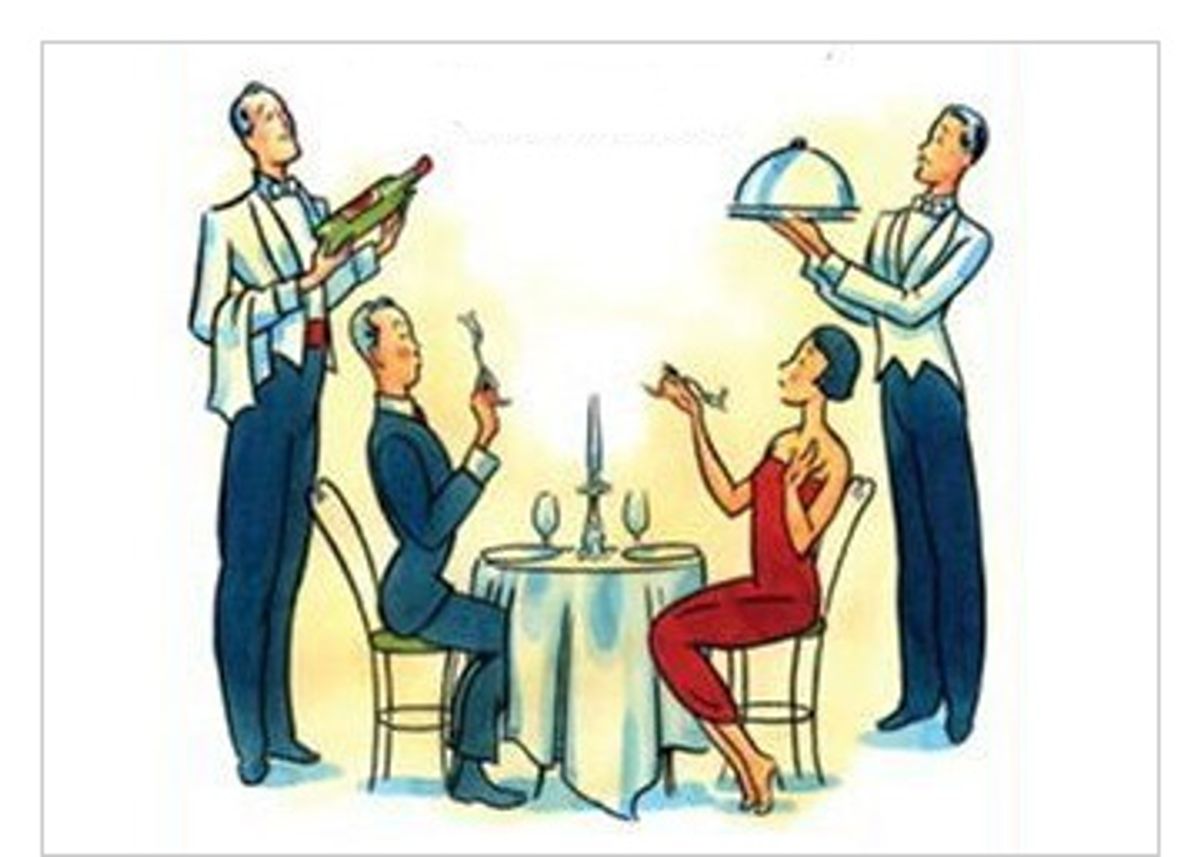 First there was Horace. Then there was Juvenal. Now there is David Kamp. Horace and Juvenal, as you may recall from your undergraduate days, each gave his name to a school of satire. Horatian satires were gentle pokes at the foibles of the day. (Think Garrison Keillor, only in a toga.) Juvenalian satires were caustic attacks on human mores. (Think Bill Hicks, but in Latin.) "Kampian satire" has not caught on as a phrase yet, but in his Snob's Dictionary series -- bluffers' guides to rock, film and now food -- David Kamp has developed a new form that can only be called aspirational satire.

Satire generally instructs by counter-example, presenting an exaggerated model of behavior in an unflattering light, and serving as a warning to readers who might be headed in that direction. Jonathan Swift's "A Modest Proposal," for example, lays out a scheme whereby poor Irish mothers might better their situation by raising babies for the English to eat. Theoretically, English landlords would read Swift's pamphlet, recognize their own cruel treatment of their Irish tenants, and by treating them better, move away from Swift's portrait of them.

Kamp's series nominally works this way; a rock snob might cringe in self-recognition on reading the entry for Brian Wilson and see a reflection of his own snobbish pronouncements on "Pet Sounds" as the greatest artistic accomplishment of the 20th century. At the same time, by providing aspiring snobs with the requisite vocabulary, the books also work to promote the same behavior they ridicule. For instance, a practicing food snob can pick up "The Food Snob's Dictionary" and recognize that it was bad manners to ask last weekend's brunch hosts if the bacon was Niman Ranch; an aspiring food snob can pick up the same book and learn that Niman Ranch is a name to reckon with in the world of meat.

Kamp's new "Food Snob's Dictionary" (coauthored by Marion Rosenfeld) appears at a moment when food snobbery is rampant. Adjectives like "artisanal" and "house-made" appear on menus, stoves can cost more than a year at Bennington, and diners gossip online about sous chefs as if they were rock stars. Kamp has a rich vein of material to mine. But as he uses the word, "snob" does not carry the negative connotation it has in real life -- it means something close to "connoisseur," even if it is the kind of connoisseurs whose refined tastes make them a burden to their less evolved friends.

By targeting two distinct kinds of readers -- those who read one of the Snob's Dictionaries to learn the information it contains, and those who read it to congratulate themselves that they already know it -- Kamp is following a trail blazed by his fellow Spy magazine alum Lisa Birnbach. Birnbach's 1980 "The Official Preppy Handbook" is the ur-document of aspirational satire. It purported to ridicule a way of life, but it also offered anxious teens from the hinterlands preparing for their first year at Colby or Vassar a guide to the Bermuda bags and Nantucket Reds they would need to blend in.

Kamp (also author of "The United States of Arugula") and Rosenfeld know the terrain of the food snob well enough to reach both kinds of readers. They write with knowledge and enthusiasm, but maintain the perspective that allows them to see the follies of the food world. Ruth Reichl, for instance, is a "Prodigiously maned gastro-sensualist and writer, known for a trilogy of memoirs ... that chart her Zelig-like journey through various food-mad locales ... as they experienced their signal moments in America's culinary coming of age. Though prone to onanistic, self-aggrandizing prose and batty flights of fancy -- wearing unnecessarily elaborate disguises while visiting restaurants, frequently invoking her dead mother as a speaking character in reviews -- Reichl has more than creditably served as editor of Gourmet since 1999."

These biographies are the most entertaining part of the book; the entry for Julia Child mentions that she was "a bawdy, fiercely liberal, whip-smart intellectual who partied harder than Anthony Bourdain." The more useful entries are for individual ingredients, and here, Kamp and Rosenfeld do some demystifying: cepe is "a cloying French synonym for porcini mushroom, used on menus to confuse diners who think porcinis are old news."

Beyond what is included in "The Food Snob's Dictionary," for real snobs a good deal of the fun of these books is seeing what is not in them. Cookbook author Elizabeth David, "who turned out two masterworks, 'Italian Food' (1954) and 'French Provincial Cooking' (1960), which though sometimes vague and imprecise in their recipes, neatly evoked a sun-dappled Southern European wonderland," gets an entry, but her more Anglo-centric counterpart, Jane Grigson, does not. For snobs keen to make their own fromage de tête, Grigson's out-of-print "The Art of Charcuterie" is the go-to reference. The less ambitious snob will make do with the recipe from snob darling Fergus Henderson's "The Whole Beast." Entry-level snobs will settle for the recipe in Ruhlman & Polcyn's "Charcuterie," which happens to be the most comprehensive and precise of these three books. Those snobs who celebrated when a university press began reissuing Grigson's cookbooks will be frosted by her absence, but pleased to have out-snobbed the snobs.

That is, they will be if food snobs can see themselves as such, for it is a label that many obvious snobs would disavow, claiming instead to be simply sensible and tasteful eaters. Is the true food snob someone who passes up the Wish-Bone dressing for the Newman's Own, or the person who disdains bottled dressing in favor of making his or her own vinaigrette -- or maybe the one who insists on using estate-bottled olive oil and house-made wine vinegar? Anyone who reads the Eat & Drink section in Salon, for instance, is likely to have some food snob symptoms, but it may be easier to recognize the snob pathology at work in different milieus, such as those covered by Kamp's rock and film dictionaries.

"The Rock Snob's Dictionary" was the first in the series, and it is here that Kamp and this book's co-author, Steven Daly, may have performed the most valuable public service for non-snobs. Compared to film and food snobs, the rock snob demographic skews younger and louder, and, as anyone who has tried to date a college radio DJ can attest, the arrogance of youth and the adulation of obscure musicians can be a lethal mix. It is not for nothing that Mark "Whatevs" Graham once characterized the denizens of Rock Snob stronghold Pitchfork Media as "indie grinches." This same intensity makes the rock snob easy to spot in the wild. If a date starts lecturing you on the vagaries of Lee "Scratch" Perry's discography, or expounds on the unheralded influence of Roky Erikson, you'll know right away what you are dealing with.

As for film snobs, they're happiest when they -- and everybody else -- are in the dark. Kamp and co-author Lawrence Levi know this, so "The Film Snob's Dictionary" trains an usher's flashlight on this shadowy sect, helpfully illuminating the differences between snob-approved Sidney Lumet ("Dog Day Afternoon") and crowd-pleasing Sydney Pollack ("Tootsie") along the way. To film snobs, "the new Cronenberg" is a film (because it has penises in it), not a movie, that must be judged against the rest of the "dystopian weird-out flicks" made by the "cheerfully depraved Canadian horror auteur."

This kind of name-dropping is the lingua franca of film snobs; see, for example the nearly Aspergerian pop-cultural patter that passes for dialogue in film snob hero/ex-video store clerk Quentin Tarantino's films. While most people couldn't pronounce "Apichatpong Weerasethakul," even if they knew who or what that was, film snobs knowingly refer to the Thai director as "Joe." Armed with "The Film Snob's Dictionary," the ambitious denizen of the multiplex can graduate to dissecting Wes Anderson's iTunes-only short, "Hotel Chevalier," and even patronize his tailor, Manhattan's Mr. Ned; the rest of us can respond accordingly when words like "diegesis" and "mise-en-scène" pop up in conversation.

If one snob can learn a lesson from the excesses of another, this series of books ("The Wine Snob's Dictionary" is in the works) may undo the very culture it seeks to celebrate/mock. By offering a witty and painless entrée into the recondite shibboleths of rock geeks, film nerds and don't-dare-call-them-foodies, Kamp has laid the groundwork for a nation of snobs. If this keeps up, will there be any philistines left for the rest of us to disdain?

Jonathan Beecher Field is an assistant professor of English literature at Clemson University. By day, he writes about print culture in colonial New England.

Amy Monaghan teaches at Clemson University and blogs pseudonymously about film. She saw Malick’s latest in December 2005, and once caught a screening of Antonioni’s Zabriskie Point with Andrew Bujalski at the Brattle Theatre.