This picture about Joy Division's Ian Curtis is one of the most beautiful movies ever made about rock 'n' roll. 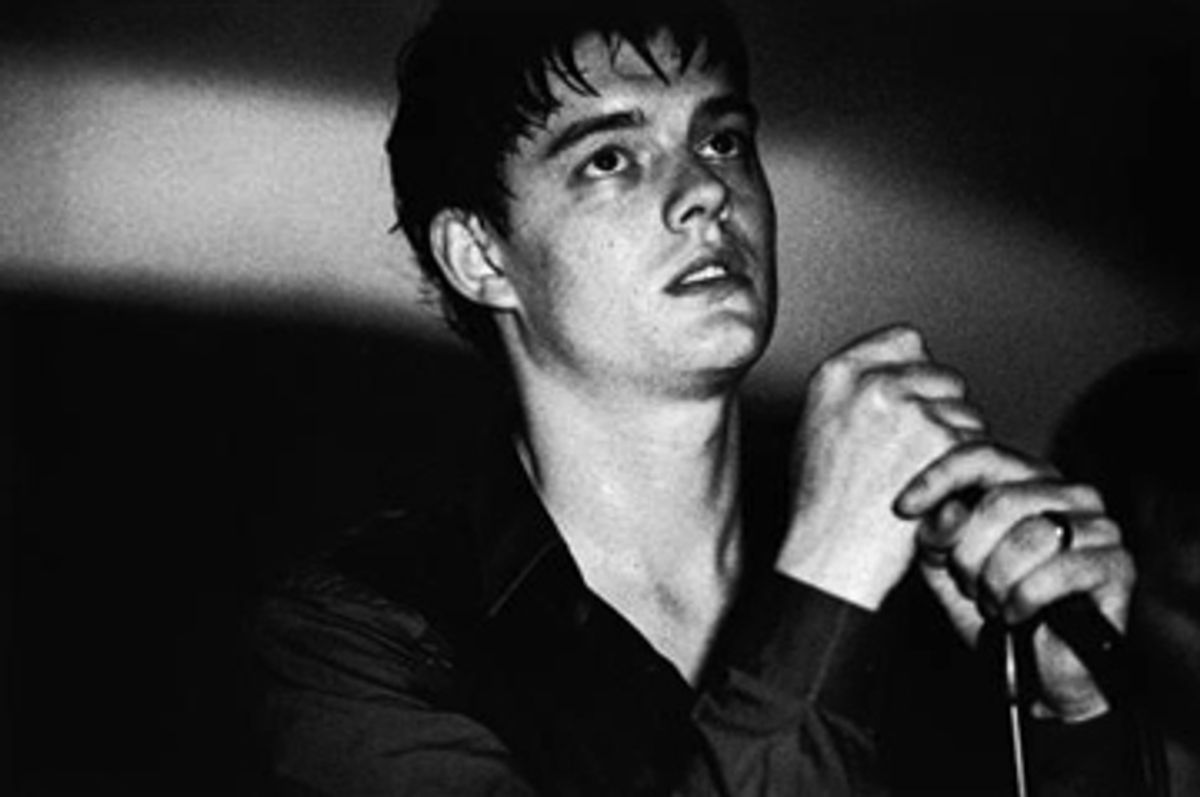 In the upstate New York city I grew up in, in the late 1970s, there was a radio station that played what it called "the music of your life." The fact that I can't for the life of me remember what kind of music this station played -- Old Patti Page songs? All Creedence, all the time? -- proves that whatever it was, it sure wasn't the music of my life. The format was surely designed for someone else: Woodstock types who, figuratively speaking, couldn't bear to shower off the mud; balding, ancient married geezers who liked to sit in the dark and think about the bobby-soxer who got away. The music of my life -- at that point, at first, it might have been Chic or Dr. Buzzard's Original Savannah Band; later, it would be the Clash or Elvis Costello -- was still being written. It was evolving, it was alive. When you're young, nostalgia is someone else's hang-up; it's like the futuristic moving sidewalks in "The Jetsons" -- it might show up in your lifetime, but you really can't picture it.

If you're over 30 -- or even if you're not -- you know what happens next: You can't hang onto youth, but you can hang onto music, and so, at least in some small way, most of us do. The trick is to guard against blind nostalgia, to open yourself to the possibility that the music you loved when you were 20 can still mean something when you're 45. Perhaps it can mean even more.

Anton Corbijn's "Control" tells the story of Ian Curtis, the lead singer of the revered Manchester post-punk band Joy Division. Joy Division -- its other members were Bernard Sumner, Peter Hook and Stephen Morris -- made only two albums before Curtis killed himself in 1980, on the eve of the band's first U.S. tour. Before Curtis' death, Joy Division was virtually unknown in the United States, even though their following in the U.K. had been growing steadily. By the time most people stateside started paying attention to them, Curtis was gone. But both his story and the band's music -- darkly glittering songs that sounded majestic rather than self-indulgently world-weary -- were compelling enough to earn Joy Division a passionate following. The fact that the band's surviving members had regrouped as a very different band, New Order, made the saga even more magnetic.

"Control" will certainly mean something to people who consider Joy Division part of the music of their lives. (I stand accused.) But the picture is so beautifully made, and so sensitive to its subject, that I hesitate to set it before my fellow late-baby-boomers as just a nostalgia trip: In addition to being one of the most beautiful movies ever made about rock 'n' roll, it also works, quite simply, as a story about a gifted and deeply troubled young guy who just couldn't hold it together. Sometimes the stories you think you've heard a million times before are merely universal.

The picture opens in Macclesfield, Manchester, in 1973: A skinny kid, all long limbs and concave angles, makes his way home through the town's modest streets full of working-class flats and houses. He's got an LP tucked under his arm (we'll later learn that it's Bowie's "Aladdin Sane"), the international symbol, as readable as the stark figural outlines used to mark men's and ladies' rooms, for teenage escapism, for the way pop music grants you the freedom to become, at least temporarily, someone else.

That kid is the young Ian Curtis -- he's played by a musician and actor named Sam Riley, in a marvelous debut performance -- and he does many of the things kids of his class and generation tended to do: He and his friends take whatever drugs they can get their hands on, generally cadged from the medicine cabinets of old-age pensioners. He meets and falls in love with a local girl -- actually, he steals her from his best friend -- a quiet but slyly intelligent young woman named Deborah (Samantha Morton, whose performance is heart-rending and raw). And after being inspired by a Sex Pistols show, he starts a band with his mates (played by Joe Anderson, James Anthony Pearson and Harry Treadaway). They call themselves Warsaw at first, but eventually change their name to Joy Division (a reference to the brothels in which Nazi soldiers were serviced by female concentration-camp prisoners). Meanwhile, Ian and Deborah have gotten married: He's 19; she's 18. One day he blurts out, "Let's have a baby!" and her response, after only the briefest pause, is "OK" -- a shorthand expression of the way the most momentous decisions in life can be made in the time it takes to unwrap a stick of gum.

"Control" isn't a movie about Joy Division, or even a cautionary tale about a rock 'n' roll casualty. Corbijn, who has directed numerous music videos and who, for some 30 years, has been one of the foremost rock 'n' roll portrait photographers, makes his feature debut with this picture, and although it at times has an almost fable-like quality, it's mostly just an intimate recounting of one particular human tragedy. (Read my interview with Corbijn here.)

"Control" is based on the memoirs of Deborah Curtis, Ian's widow. (She's also one of the movie's producers.) It's both a portrait of a person and a snapshot of a time. Curtis may have been an introspective and moody sort to begin with: An early scene shows him reciting Wordsworth to his clueless best pal, and to Deborah, who's suitably intrigued. But not long after the band started up, he was diagnosed with epilepsy, and the cocktail of drugs used to treat the ailment was unpredictable and only marginally effective. His new life as the most unlikely sort of rock star -- on-stage, he was jittery and charismatic, qualities that Riley captures perfectly here -- conflict with his life at home as a husband and father. He meets a sophisticated but sweet journalist named Annik (played by a lovely young actress named Alexandra Maria Lara), and the two tumble into a tender affair that rattles everything he'd always thought was safe and secure about his life.

"Control" nails the vibe of its era, but it also evokes a feature of rock 'n' roll that can't be confined to a specific time or place: The feeling of seeing a brash new band in a tiny club and feeling as if a whole new life is opening before you. (The actors perform the songs themselves, and while Joy Division purists may complain about that, the numbers have both energy and gravity, and they suit the movie perfectly.) Corbijn and cinematographer Martin Ruhe shot the picture in lustrous black-and-white.

I've heard people describe the look of the picture as "stark" and "gritty," but I can't see it: This is, by far, the most rapturously beautiful-looking picture I've seen all year. The images have an almost satiny texture. Corbijn's shots are always meticulously composed, as you'd expect from a filmmaker with a background as a portrait photographer, but even though they sometimes betray only the smallest traces of movement, they're always alive, never static. The look of the picture reminds me of the early Beatles photographs taken by Astrid Kirchherr: Corbijn picks up on everything that's innocent and open about these kids' faces (and they were, after all, just kids). The suggestion is that they were standing on the cusp of something massive and overwhelming -- that they'd been granted a wish that could either make or destroy them.

The Manchester music scene has been the subject of a previous picture, Michael Winterbottom's buoyant, expressive "24 Hour Party People." But "Control" is a very different movie -- perhaps less of an insiders' picture, one that music snobs may not like, but one that "real" people will easily respond to. I saw "Control" first at the Toronto Film Festival, and later at a screening in New York. After the New York screening, a woman who was perhaps 10 years older than I am (in other words, not someone you'd automatically put in the Joy Division demographic, if we care to delineate such a demographic at all) approached me. She had clearly loved the movie -- she'd stayed until the very last credit had rolled away -- and she wanted to know: What happened to the band after Curtis' death? Did they break up? Did they ever get to America?

I explained to her that the band had reformed under the name New Order, and that although Joy Division's trip to America had of course been canceled, New Order had played here many times. She told me she'd known nothing about Joy Division going into the movie, but that she recognized most of Curtis' literary references. (There's a shot in the movie of Curtis' bookshelf, laden with the likes of Burroughs, Ginsberg and J.G. Ballard.) This woman's response confirmed for me that Corbijn's movie isn't just for the faithful. Instead of painting a tiny, cramped picture intended only for the elite, it opens up one small corner of the world for everybody. "Control" is proof of the way the music of someone else's life can suddenly and magically become your own.