Rock photographer Anton Corbijn discusses his intimate, eloquent movie about Joy Division, "Control," and the band that inspired it. 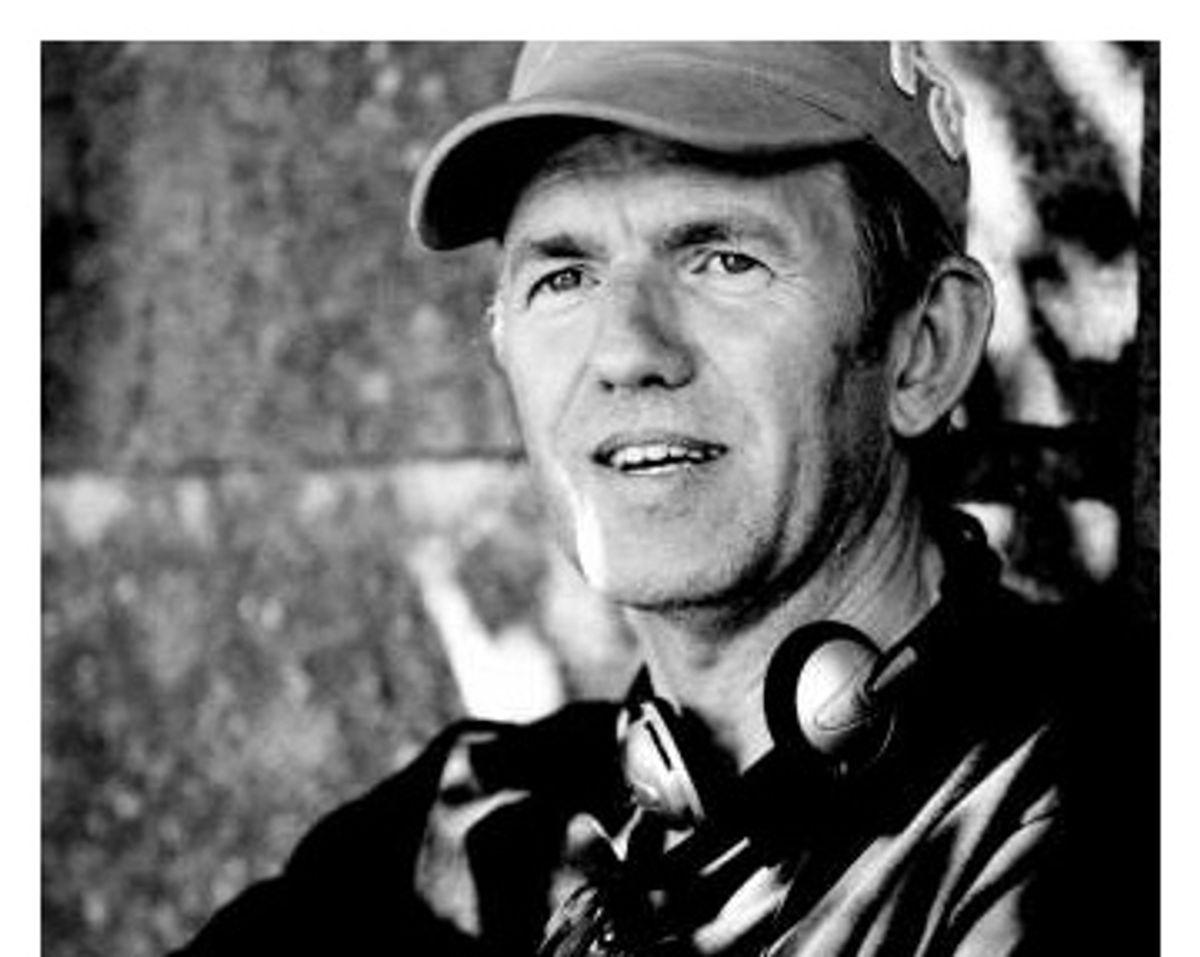 For more than 30 years, Anton Corbijn has been one of the premiere rock 'n' roll portraitists. You name the major rock star or band -- Kurt Cobain, U2, R.E.M., David Bowie -- and it's likely Corbijn has photographed them at one time or another. He has also directed numerous music videos for the likes of Nirvana, Johnny Cash and, most frequently, Depeche Mode. But he freely admits that the music of Joy Division -- the revered Manchester band formed in 1976 by Ian Curtis, Peter Hook, Bernard Sumner and Stephen Morris -- meant so much to him that it made him want to move from his native Holland to Great Britain.

Corbijn, 52, photographed Joy Division very early in his career, and his stark, eloquent black-and-white pictures are perhaps the best record we have of this deeply influential but short-lived band: Curtis committed suicide in 1980, the day before Joy Division was to set off on an American tour. (The remaining band members reformed as New Order.) Now Corbijn revisits the story of the band he's always loved in a feature film (his first) called "Control." (Read my review here.) I spoke with Corbijn recently in Toronto, where he talked about the awkwardness he felt upon first meeting the band he so idolized, his decision to shoot the movie in black-and-white, and how beautiful things can happen even when you're making a movie about tragedy.

I remember seeing "The Big Chill" when it came out and thinking, "I hate these old hippies! They act as if they invented music." But now that I'm middle-aged myself, I find I'm looking for movies or works that reflect my experience of the music that meant something to me. And your movie really does that. I wonder if you could talk about that. You were there, and you knew the guys in the band.

Their music was powerful enough for me to actually move [to another country]. When music affects you, you don't want something very cheap to represent [it] -- so I wanted the movie to have a depth to it.

As I was watching the movie, I kept thinking of those early Beatles photographs by Astrid Kirchherr. I think part of it is that they, like the movie, are in black-and-white, and the texture and the quality of the surface of the image are similar. And maybe it also has to do with the guys' haircuts. But there's also this sense of being there at the beginning of something new.

It may be easy to compare, because it's black-and-white, and it's England. You have the schoolboy kind of thing, with the ties, which was [something like] the early Beatles pictures, wasn't it? A very English thing -- boys have uniforms on at school. In Holland, you didn't have that. You only had the tie on on Sundays, for church. I guess maybe from a distance it looks very similar. But there was a good 13, 14, 15 years between them.

I've talked to people who thought Joy Division was the missing link between the Beatles and Nirvana, which is quite interesting.

It could be. Watching the movie, you realize that the space between the time the Beatles hit and when Joy Division appeared was really not that long.

No -- and it's the same amount of time between Joy Division and Nirvana.

How did you approach making a film about people you knew personally?

I knew [the guys in Joy Division], but I didn't know them very well. I think the impact that my photographs had suggested that we had a very strong and deep relationship. It was a deep relationship in the sense that I really loved the music. But I didn't really know the guys. We met for a photo shoot in London -- it was maybe 10 minutes -- did the pictures. They liked them, so I went to Manchester to do some more pictures, but I was basically observing that day while they were doing the "Love Will Tear Us Apart" video. We didn't go out together a lot or any of that stuff.

I actually have to go back to my pictures to look and get memories back from that period. But there's nothing [at the forefront of my memory] apart from meeting them for that first shoot in London. I remember that quite well, because I really wanted to shake their hands, which you do in Holland to say hello. They wouldn't shake my hand! And they did after I took the picture. I always remember that vividly, because they were kind of heroes, and I'd just moved to England.

I know the guys from New Order now much better, of course, than I did at the time.

As much as I love Joy Division, I find it difficult to listen to their music because the story is so sad. In the abstract, you think "Oh, this is very depressed music made by dour guys." But the movie is actually very funny in places, especially at the beginning. And you realize that the guys in Joy Division were just kids. I mean, we were all kids --

Yeah, they were very young boys. The movie doesn't try to make them into myths. It's very down-to-earth, really. It's very human. It's basically the story of a young boy finding his way, and getting lost, I guess.

How did you find Sam Riley, the actor who plays Ian Curtis in the film?

He was quite a find. We had open castings, and he came to one of them. He stood out for me, so I went to meet him. There was a beautiful freshness to him. He had a strong resemblance to Ian, but there was something about him in person as well that really I liked a lot and felt was very appropriate. It turned out to be an incredible blessing for the film.

A lot of times when people make movies set in these small English towns, they make them look either too picturesque, or they go out of their way -- the Ken Loach approach -- to make them very dreary, like the kind of place you can't wait to get away from. I'm not saying the way you've portrayed Macclesfield is unrealistic, or it makes it look 20 times better than it really does. But it does look quite beautiful, in its own way. Was that a conscious choice?

I didn't look at any references in that sense. It just came natural. What I told a few people, it looks like a '60s English kitchen drama. But I'd never seen any of those movies -- I didn't grow up with them at all. Martin [Ruhe], the D.P. [director of photography], is German, and I'm Dutch -- I think we're filming in a very English situation, but we're looking at it with European eyes. I think maybe that's what the look is.

And why did you shoot the film in black-and-white?

It just felt totally appropriate to the project. When you research Joy Division, everything's in black-and-white. Not just my own image of Joy Division, but everybody else's. The album sleeves are black-and-white. [The band] were not known for wearing orange, or yellow pinstripe trousers, or anything. Very much shades of gray. So I think it was totally right to document it that way.

You've directed a lot of videos, but this is your first fiction feature. And obviously, your background is as a photographer. What's it like to work with a D.P. on a project like this?

I've worked with many D.P.s, very well-known ones like John Mathieson or Harris Savides. With Martin, there was a really strong connection, how we looked at things. I've worked with him a few times on videos. He's a very conscientious guy, very open-minded. For the film, we worked it out in advance how we wanted to film it, without making a storyboard, but we knew every shot. But at the same time, we were still open to whoever came up with the best idea. His idea, my idea -- it didn't matter. Whatever was better for the film.

I could totally rely on him, and we had a very strong, solid theme during the making of the film. If it's your first film, it's really important to have a relationship with someone on the production that's really solid. It's tough -- you can easily get lost when you're making a film.

People think what happens is that I direct and Martin only looks through the camera, and we never communicate. Of course I see every shot that we make. It's not that you give that responsibility away. But you just know that Martin will make everything look fantastic.

In "Control," one of the characters you feel the most for is Ian Curtis' widow, Deborah, played by Samantha Morton. I know the movie is based on her book, and she's also one of the producers. But the picture is also very sympathetic to Curtis' mistress, Annik. She's not presented as a hussy or a home-wrecker.

No, she wasn't. They had a very honest love between them, a very significant love. I've read all the letters that Ian wrote to her. It was real, and she's not some dumb groupie hanging around or anything.

If Ian had fallen in love with another girl in Macclesfield, it would be one thing. But this was such a totally different kind of woman. [He had started] growing out of those Macclesfield surroundings. I tried to be neutral in the film. But, of course, the wife is the one you feel great sympathy for, because she's losing him.

But what's nice is that in the afterlife, the actors who play Ian and Annik, Sam and Alexandra [Maria Lara], have become a couple. For a year now. So it's beautiful.