Gore is rewarded for his epic efforts to focus attention on the perils of climate change. 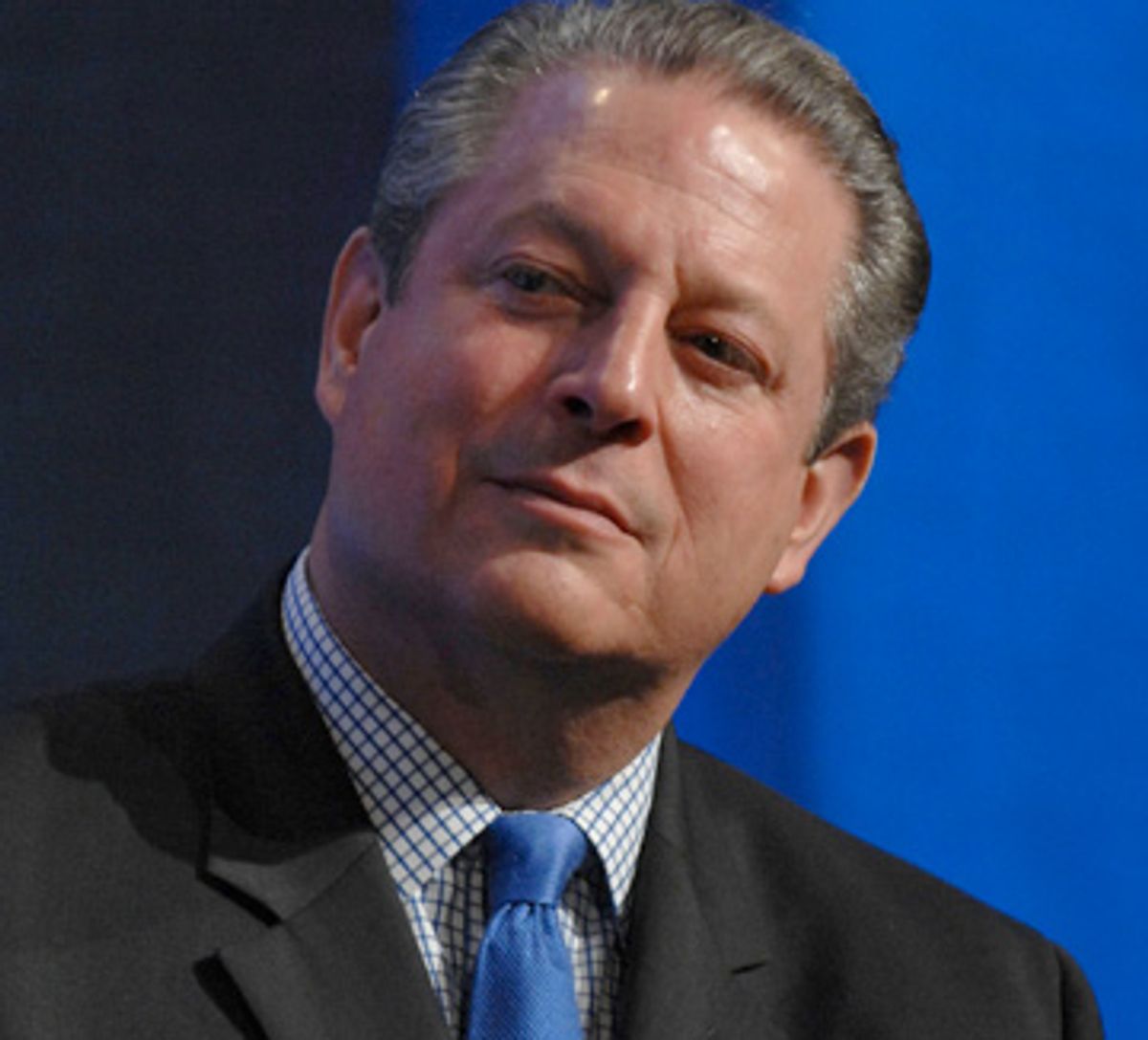 What's world peace got to do with global warming? Perhaps everything. Or it will if things don't change fast -- if, in 10 or 20 or 40 years devastating floods and droughts displace millions of refugees and spur nations and tribes to desperate bloodletting. At which point, no one will have the slightest doubt why members of the renowned Scandinavian foundation thought former U.S. Vice President Al Gore was an obvious choice for the 2007 Nobel Peace Prize. Gore is, quite simply, the indispensable player in the drama of mankind's encounter with the possibility of destroying the climatic balance within which our civilization emerged and developed.

As anyone who read the book or watched the documentary "An Inconvenient Truth" knows, Gore has been troubled by and fascinated with the science of climate change since his undergraduate days at Harvard, where he first encountered the theory that carbon emissions are slowly causing the planet to overheat. He began holding congressional hearings on the subject the moment he hit Washington in the early '70s and has not let up since -- perhaps because he understood instinctively that it was not a question of whether changing the atmosphere's chemical balance would disrupt climate, but when, and how fast.

He recognized, too, that the incredibly hard task of turning around the world's energy economy would become impossible if we waited for global warming to announce its presence, stage left, with alarum and hautboys as Shakespeare might have scripted.

So for years he accepted the thankless role of Cassandra, the Greek prophet no one would heed. But unlike Cassandra he did not sit by to watch fateful tragedy unfold. Once, when I was particularly frustrated by challenges I faced in my job at the Sierra Club, Gore heard me out and replied: "Never, ever give up." That would seem to be his motto, as reflected in the thousands of speeches he has delivered, the Live Earth concert he built from scratch, the naysaying he has endured, the movement he inspired.

What's all that have to do with peace? Look at Iraq, Darfur or the Israeli-Palestinian conflict -- bloody sites that have engendered three Nobel Peace prizes. Twenty-first century conflicts seldom feature stable governments colliding, but rather collapsing societies attacking themselves. These are much harder to solve with diplomacy or peacekeeping troops. Prevention is the key.

The Nobel Committee has recognized this in recent years, awarding its prize to such previously unlikely winners as Iranian feminist Shirin Abadi, and Muhammad Yunus, a pioneer of microfinance for the poor.

A quick list of trouble spots that climate chaos could ignite would include:

In 2004, the Nobel Peace Prize went to Kenyan environmentalist Wangari Maathai. She is not a general or president. She was founder of the grass-roots Green Belt Movement, which planted more than 30 million trees across the country, providing jobs, power and education to women in the process. In the Nobel committee's words upon awarding that prize: "Peace on earth depends on our ability to secure our living environment."

The committee apparently sees Gore in a similar light, as someone who has spent much of his career staving off conflicts by uniting strange bedfellows behind the common cause of protecting humanity's only home.

In the 20th century peace was something to be achieved after the horrifying bloodletting of world war began. In the 21st century, although the world faces a new era of turmoil, peace ultimately must be about identifying and resolving the sources of conflict before battles break out. That's why no one deserves the Nobel Peace Prize more than Al Gore.