Cate Blanchett is back as the browless Virgin Queen. But this semi-lavish sequel is a royal stiff. 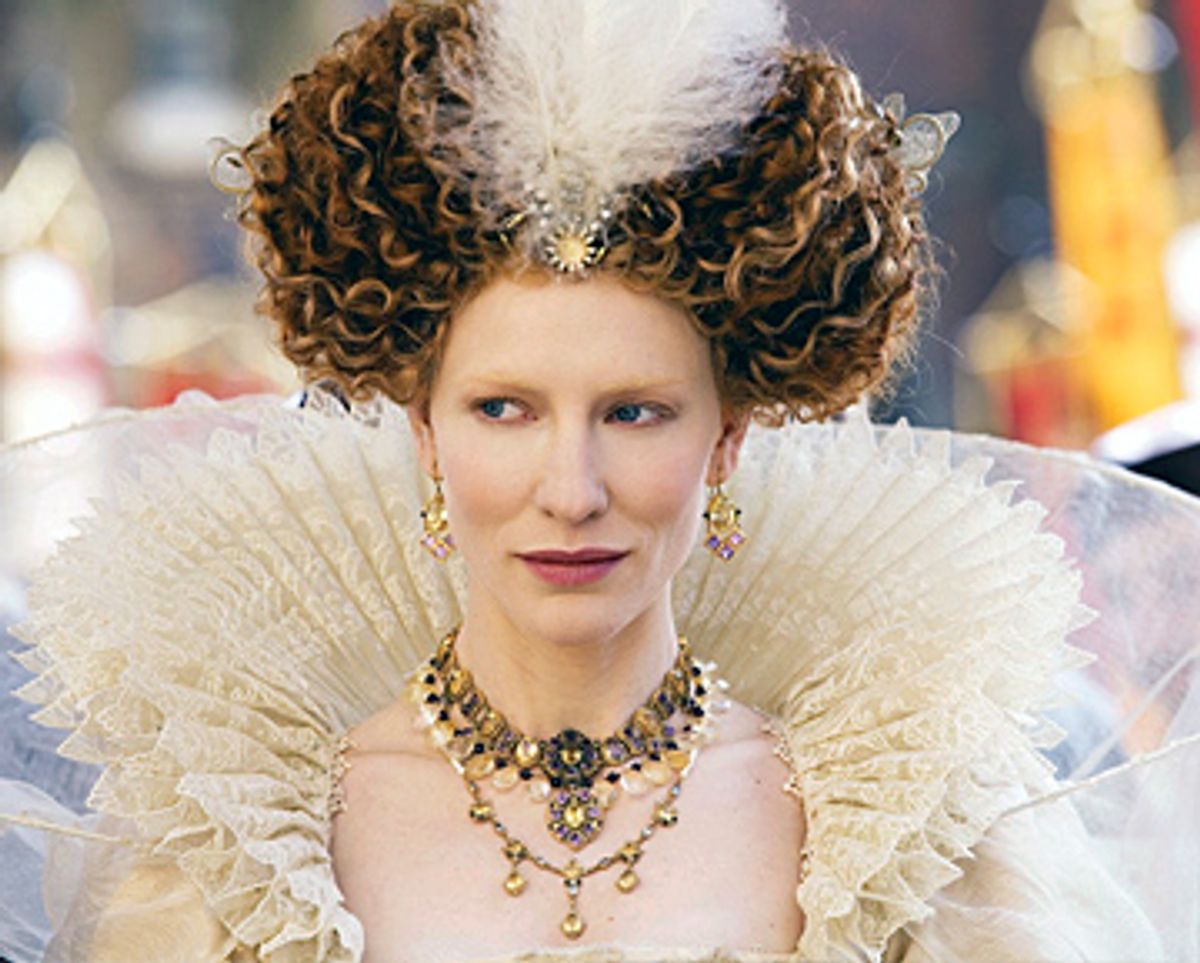 The year is 1585. King Philip II of Spain is one pissed-off potentate. His country is the most powerful in the world, but England won't bow down to it, and Philip, a devout Catholic and total kook, simply cannot abide its Protestant queen, the eyebrowless Elizabeth I. Elsewhere, in Scotland, the Catholic Mary Stuart, aka Queen of Scots, a possible heir to the English throne and the object of Elizabeth's mistrust, languishes in a sort-of prison. Meanwhile, in England, Elizabeth's advisors are trying to marry her off, presenting her with whole bunches of unsuitable suitors. She flirts with one of her cute ladies-in-waiting, but she also bats her virtually lashless eyes at a scruffy-hot explorer, Sir Walter Raleigh, who's just drifted in from the New World bearing a bundle of tobacco leaves, a product he swears is going to change everyone's lives -- to say nothing of the eventual boon for toothpaste with special whitening agents.

That's the basic setup of Shekhar Kapur's "Elizabeth: The Golden Age," the follow-up to his stately 1998 snoozer "Elizabeth," and while I'm sure more knowledgeable types will find many historical problems with the picture (its predecessor certainly outraged plenty of my friends), inaccuracy isn't the biggest issue here. It's simply that Kapur, once again, has taken a story with plenty of juice and bled it into something pale and limp.

"The Golden Age" is frustrating because Kapur does seem to have a taste for nutball pageantry -- he just won't let himself go all the way with it. The picture's early scenes are draped with a pall of somber serenity: We see Cate Blanchett as the Virgin Queen, bewigged and so heavily powdered we can barely make out her fine features. She has the stiff, glazed demeanor of a Royal Doulton figurine. But a few scenes later, Kapur and writers William Nicholson and Michael Hirst loosen up a bit, and her performance blossoms. She giggles and titters with her favorite lady-in-waiting, Bess (played by the luminous Abby Cornish) -- the two have a relationship that's semi-erotic and semiotic, a language of signals and half-smiles that's largely, though not wholly, innocent. But when the otherwise businesslike Elizabeth gets a gander at Clive Owen's Sir Walter Raleigh, who strides into her court in an ultra-manly distressed leather jerkin, all she can do is mime the repressed Elizabethan equivalent of "Hotcha!" Owen and Blanchett are unbreakable actors: They blast through even the crappiest movies without a cut or a bruise, and here, they parry and joust in a way that's both intelligent and blatantly sexy. Their scenes together may have nothing to do with history, but at least they're breathing.

Unfortunately, almost everything else around them is dead. Samantha Morton is wasted in the role of Mary Stuart; she has little to do but glower and pout. Jordi Mollà, as that barrel-of-fun King Philip, gets lines like, "What news of the Jesuit?" In Spanish, no less. Geoffrey Rush returns as Sir Francis Walsingham; he slinks through the picture, glaring with disapproval at nearly everyone, his chest bedecked with Flava Flav medallions. There are moments when the picture springs to life visually (the cinematographer is Remi Adefarasin, who also shot "Elizabeth"), particularly the scenes that take place in court: Flocks of ladies-in-waiting float by in their broad, silken gowns. Acrobats and entertainers flit here and there in golden costumes. But Kapur won't go all the way and just allow the thing to get totally crazy; he chickens out and stops at semi-crazy. Even the movie's modestly rousing battle sequence is just too little too late. "Elizabeth: The Golden Age" might have been a lavish, silly entertainment. In places it comes close, but no sheaf of tobacco.