To avoid war, Bush should engage in direct negotiations with Iran -- and restore America's commitment to its own disarmament. 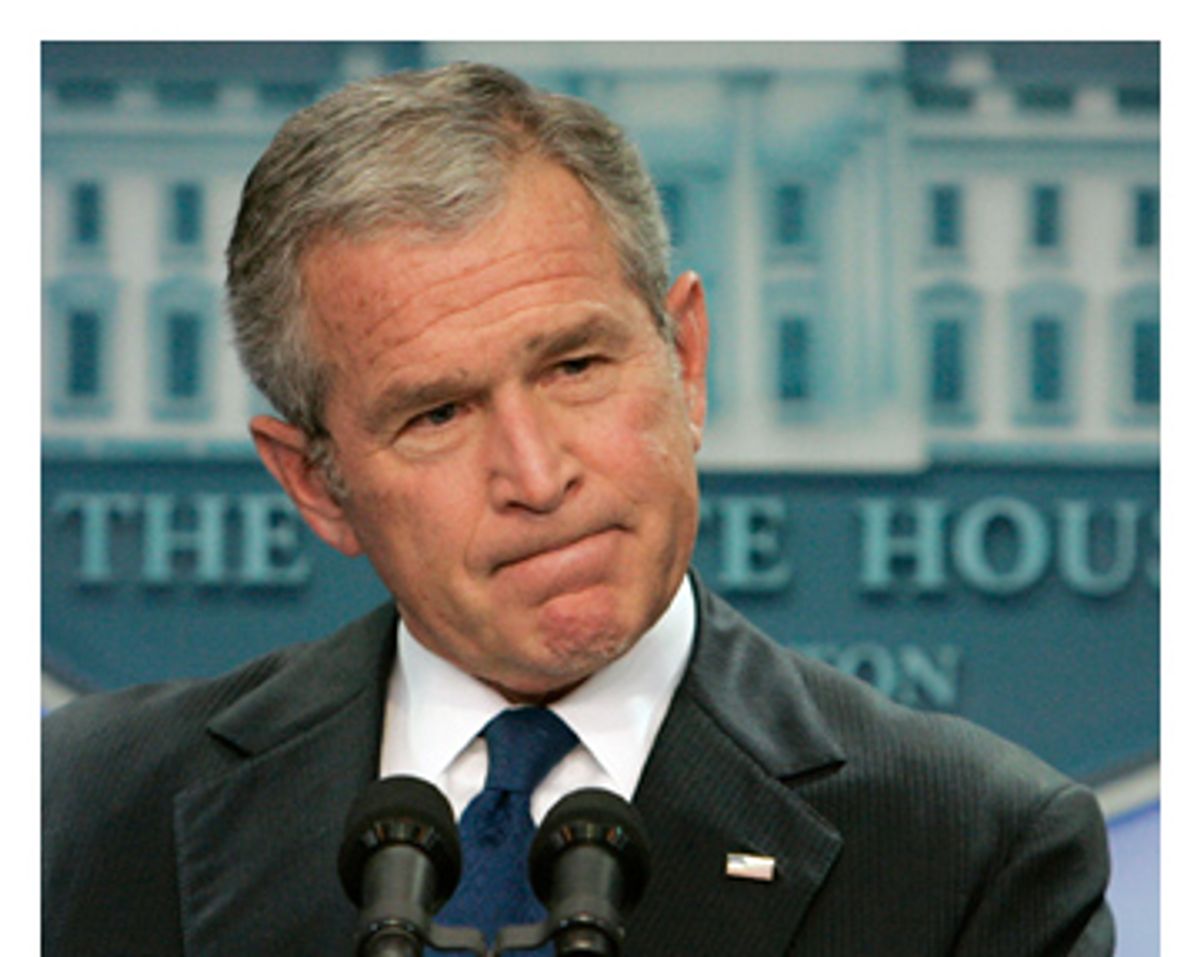 Trying to understand what is on George W. Bush's mind when he opens his mouth is often a fruitless exercise, but his latest statement concerning Iran, nuclear weapons and World War III was troubling as well as opaque. Just what did the president mean when he uttered those apocalyptic remarks on Wednesday?

"We've got a leader in Iran who has announced that he wants to destroy Israel," he blathered. "So I've told people that, if you're interested in avoiding World War III, it seems like you ought to be interested in preventing them from having the knowledge necessary to make a nuclear weapon."

Sorry, but the Iranian leadership and many other unsavory figures around the world cannot be prevented from "having the knowledge" needed to build a nuclear weapon, since, as Matthew Yglesias has noted, the scientific and engineering information is commonly available.

What the Iranians don't have yet is the industrial capacity to make enough weapons-grade enriched uranium for that purpose and then to transform that material into a bomb. What they do have, unfortunately, is the means to achieve that end eventually -- and thanks in part to the irresponsible policies of the Bush administration, they also have both a motive and an excuse.

It is true that Mahmoud Ahmadinejad's ugly speeches about the Jewish state and the Holocaust leave little doubt about his attitudes. Moreover, there is no question that the Islamic Republic rejects Israel's legitimacy and has sought to undermine the Middle East peace process through every means at its disposal, including terrorism.

Yet despite the American media's constant repetition of Ahmadinejad's rhetorical attacks, the destruction of Israel is almost certainly not the real reason that Tehran's theocrats want to develop nuclear reactors that could someday be used for sinister purposes. Neither the Iranian president nor the mullahs who actually control the Islamic Republic can possibly imagine that their state would survive for long if they launched a first strike against Israel -- or even looked as if they were preparing to do so.

Within Iran, the debate over nuclear development centers on ensuring the security of the regime against external enemies, notably including the United States, that are suspected of plotting its destruction.

No doubt that perception, which only strengthens the regime's hard-liners, was reinforced by Bush's explanation of his Iran policy during that Wednesday press conference. "The whole strategy is that, you know, at some point in time leaders or responsible folks inside of Iran may get tired of isolation and say, 'This isn't worth it,' and to me it's worth the effort to keep the pressure on this government," said the president. "My intent is to continue to rally the world, to send a focused signal to the Iranian government that we will continue to work to isolate you in the hopes that at some point somebody else shows up and says it's not worth the isolation."

Let us leave aside for a moment the Bush administration's abject failure in rallying the world for any purpose, let alone regime change or even nuclear sanity in Iran. Six years of neoconservative "toughness" has done nothing to discourage the Iranian regime, and instead has encouraged a harder line by the mullahs -- who have enjoyed a vast improvement in their regional power because of the U.S. invasion and occupation of Iraq. But the problems with Bush's approach go even deeper, because he has consistently provided the Iranians with excuses to do precisely what we and our allies want to stop them from doing.

Even before 9/11, the president and his policymakers set out to undermine the nuclear nonproliferation treaty (NPT), the same treaty whose strictures they cite in seeking to impose sanctions (or worse) on Iran. What almost nobody in the United States ever mentions -- but the Iranians and other hostile regimes know very well -- is that the Bush administration blatantly violates the NPT every day. The treaty's sixth article says in plain terms that the United States and other signatories that possess nuclear weapons are obligated to disarmament, in exchange for all the other signatories agreeing not to develop those weapons in the future.

The Bush administration's strategic doctrine rejects the obligations of the NPT and urges the construction of a new and more powerful nuclear arsenal, including "tactical" weapons that could be used against regional adversaries such as ... Iran. Moreover, the administration seeks to provide nuclear assistance to India, a nuclear state that never signed the NPT, which is also a treaty violation. And then there's Israel, another nonsignatory nation, whose stockpile of hundreds of nuclear weapons is simply not a subject that American diplomats are willing to discuss.

All these large and small hypocrisies undermine our moral case against Iran's nuclear program, especially when there is still no proof that the Iranians have a bomb-making program at this stage -- and when our own intelligence estimates suggest that any such capacity is probably still eight to 10 years away. The flaws in the American argument against Iran are amplified by Bush's continuing rejection of direct negotiations.

None of this means that we shouldn't try to stop Iran and other hostile states from acquiring nuclear weapons, which would indeed destabilize the region and, like those in Pakistan and elsewhere, make the world a more dangerous place. But if the world somehow evades World War III or war with Iran until the day Bush and his belligerent Vice President Dick Cheney leave office, we can only hope that their successors abandon the policies that have failed -- and replace them with initiatives that just might make us safer.

What would we do if we were interested in "avoiding World War III"? We could start by engaging Iran in direct negotiations to bring the regime into the global and regional system, so that hard-liners like Ahmadinejad will have fewer excuses for pursuing their nuclear mania. And we might at last abandon the neoconservative fantasies of nuclear dominance, by restoring the American commitment to eventual nuclear disarmament as the only path away from worldwide proliferation.