In his directorial debut, Ben Affleck proves he can evoke a place, better even than Clint Eastwood can. But is that enough? 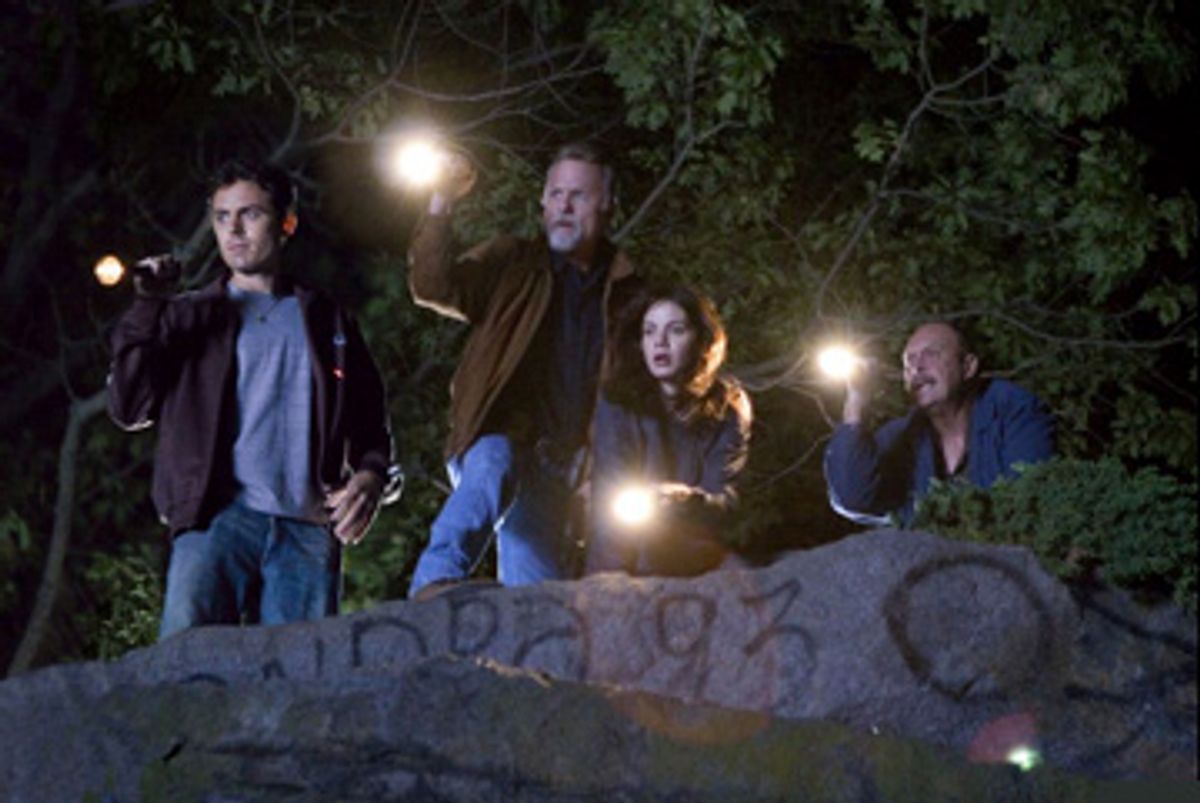 "Gone Baby Gone" is Ben Affleck's directorial debut, and it's based on a detective thriller by another Boston native, Dennis Lehane. If you've never lived in the Boston area or spent any significant time there, the clannishness of certain neighborhoods -- in Dorchester, South Boston or Charlestown, for instance -- can seem like an exaggerated construct when you see it portrayed in the movies. But that clannishness, that closeness within communities and between families, is real, as is the immediate suspicion of anyone who doesn't look, talk and act like everyone else in the neighborhood. In "Gone Baby Gone" Affleck captures that stubborn insiderishness, the idea that if you come from "outside," you can't really know a place.

Casey Affleck, who plays private detective Patrick Kenzie, opens the movie with an expository voice-over: "I've lived on this block my whole life. Most of these people have." The camera scans the faces of these people -- teenage girls with tough-looking, black-rimmed eyes; guys who will never be convinced the backward-baseball-cap has become passé -- as a way of giving us a sense of the continuity of life in these places, from block to block, from year to year, from decade to decade.

But even though communities have definite characters, a filmmaker can't stop at capturing the flavor of a street, or of a block. Ben Affleck is smart about setting the scene -- he's even better at it than Clint Eastwood was in another Lehane adaptation, "Mystic River." But he's less adept at defining individual personalities, at making us care about the characters who deserve our sympathy -- or, maybe more important, the ones who don't. And "Gone Baby Gone" -- a mystery about an abducted girl and the way she becomes a pawn in a world of negligent mothers, drug dealers, child molesters and even the officials whose job is to protect her -- is a story that demands that.

Kenzie is a private investigator who works with his girlfriend, Angie Gennaro (Michelle Monaghan), to solve missing-persons cases. When a 4-year-old neighborhood child, Amanda McCready, goes missing, the girl's anxious aunt and uncle (played by Amy Madigan and Titus Welliver) approach them to help find her. Amanda's mother, Helene (Amy Ryan), is a coked-out tough cookie; it's hard to read how broken up she is about her missing daughter. Luckily, there are plenty of people around who appear to care more, including police detective Remy Bressant (Ed Harris), whose exquisitely manicured beard suggests near-manic attention to detail, and police captain Jack Doyle (Morgan Freeman), who has a somewhat personal stake in the case: His own daughter was abducted and killed years ago, and he sees himself as an advocate for missing children.

In "Gone Baby Gone," people do the wrong thing for the right reasons, and Kenzie finds himself caught in the conflict, certain only that he wants to do the right things for the right reasons -- a certainty that isn't always possible in life. The picture ends on an unsettling, unresolved note. The problem is, you walk away wondering why certain characters take action in a way they think is right, and then just step back lazily and allow the obvious terrible things -- the things the rest of us can see coming -- to happen. I believe this is supposed to be what passes for "moral complexity," but it doesn't quite wash.

Affleck is admittedly dealing with some difficult subjects here, namely, the sexual abuse of children. That's among the hardest things to address in a movie, and although Affleck tries to handle one particular incident with discretion and sensitivity, he may still push the visuals just a bit too far. Even so, it's clear he's approached the material with thought and care. (He and Aaron Stockard wrote the screenplay.) Cinematographer John Toll gives the picture an aura of dread and unease; tension hangs in the atmosphere as if it had an actual molecular structure. Even Casey Affleck, an actor whom I don't think has much presence (and who needs enunciation lessons, badly), is reasonably believable here: Because Kenzie looks so young, the people around him don't believe he has any authority or weight, and Affleck gives the character the right amount of prickly, sullen defiance. Michelle Monaghan, a charming and flinty young actress, doesn't get much to do here: The camera mostly looks to her to catch a reaction, although she's good enough that she makes even the subtlest facial response seem active rather than passive.

As a director, Ben Affleck may turn out to be quite good with actors: I get the sense he knows just how much latitude and how much guidance he needs to give them. But he may need to work harder at shaping material, and at making his characters emerge as rounded, believable people. In trying to capture the flavor of certain Boston neighborhoods, it's all too easy to swerve into caricature. While it's true that sometimes real people edge alarmingly close to caricature, you want to populate your movie with people, not signposts: In "Gone Baby Gone," we've got the drug-running, negligent mom with stringy hair and bad grammar; the mom's best friend, with equally stringy hair, who says "vidjual" when she means "vigil." It's not that people like that don't exist. And sometimes, as much as we want to believe there's substance beneath a surface, that's not always the case. Still, "Gone Baby Gone" is a little too comfortable with its stereotypes. Sometimes, you want to believe people can surprise you -- even if the ultimate, sorry answer is that they can't.