Cocktail fanatic Jeff Berry talks about mixing the perfect zombie, the allure of tiny umbrellas and other secrets of the tiki bar. 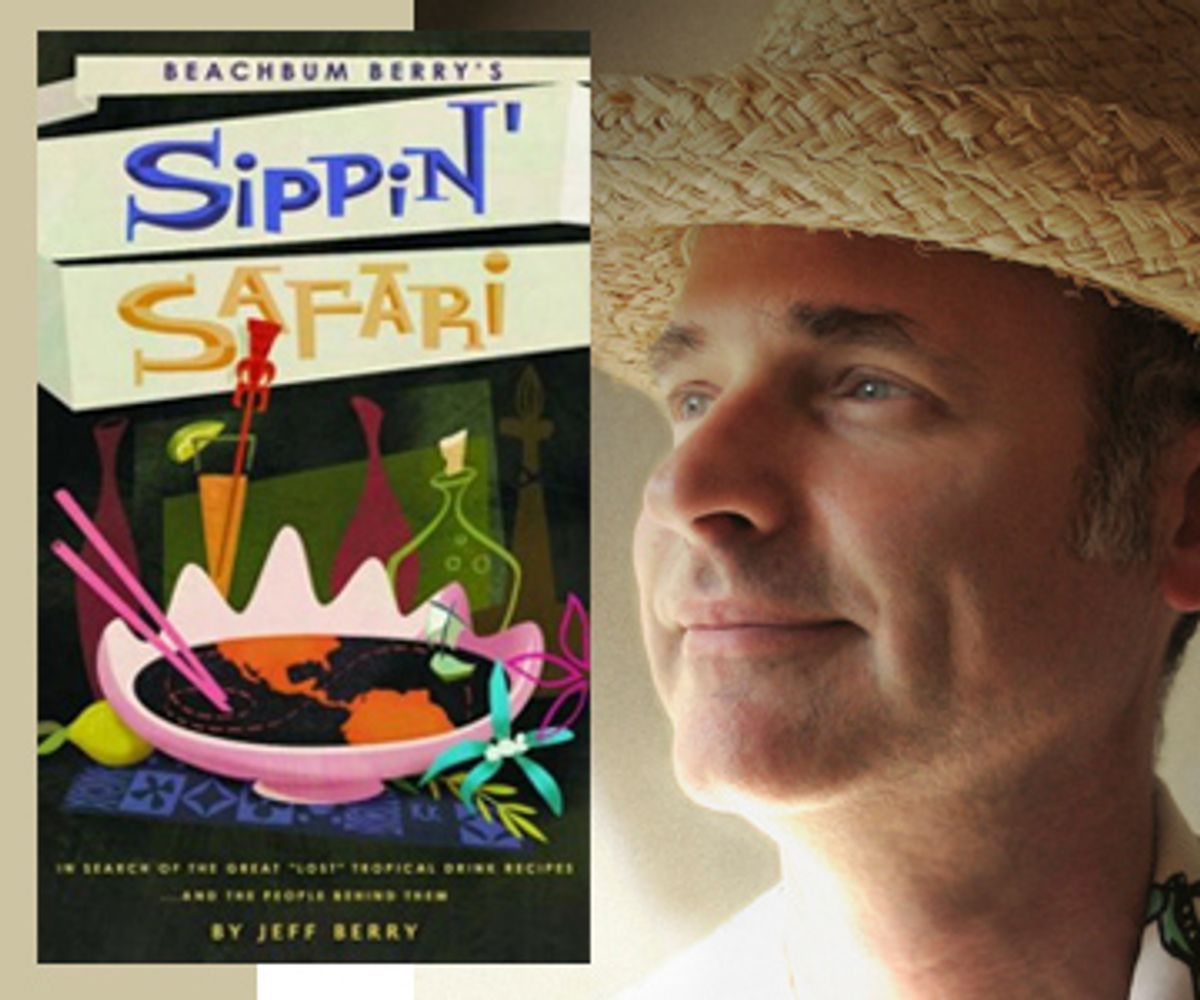 For many years, so-called tiki drinks were the punch line of the cocktail world. The quasi-Polynesian tropical concoctions served in the kitschy mugs and adorned with paper parasols couldn't get any respect in a world of elegant martinis and stately manhattans. Not anymore.

In recent years, as the cocktail revolution has gathered steam, mixologists and drink historians have taken the time to reexamine the zombie, the mai tai and their brethren. What they discovered was a lost universe of finely honed drinks boasting complex flavors and requiring as much skill to execute as any libation in the bartender's lexicon. Leading the charge has been Jeff Berry, aka Beachbum Berry, a former screenwriter-turned-cocktail expert who has gone to great lengths to uncover the lost recipes and bar histories of one of the defining drinking trends of the mid-20th century.

In his most recent book, "Sippin' Safari," Berry relates the origins of a bygone rum-soaked world, including the lives and adventures of its pivotal figures and cocktail creators, such as Donn Beach (aka Ernest Raymond Beaumont-Gantt), founder of the once phenomenally popular Don the Beachcomber chain, and Trader Vic (aka Victor Jules Bergeron). Berry talked to Salon about his life as a South Seas alcohol archaeologist.

You explain the phenomenon of umbrellas in drinks in "Surfin' Safari." Hawaiian bartender Harry K. Yee used them instead of sugar cane sticks, because they were easier to clean up. Do you approve of them as garnishes, or do you find them silly?

Here's my thing. I'm trying to be an evangelist for these lost drinks that were actually worthy, that could actually hold their own against all the other alcoholic inventions in this country. Then, someone has a visual image in their mind and says, "Are you talking about those drinks that come in those mugs with the umbrella?" It kind of works against me.

As much as I love tiki mugs -- and I have a whole collection -- I don't serve drinks in them. I want to see the drink in a glass. It's a legitimate drink in the same way a manhattan is. I want to see a zombie in a nice, tall, frosted glass where I can see the color of the drink.

How did you develop an interest in tiki drinks?

I grew up in the San Fernando Valley in the late '60s and there were a ton of these places. My parents liked Chinese food so they would go to this place, Ah Fong. It had opened in the early '60s as the Bora Bora Room, but whoever opened it spent so much money on decor that they went broke soon after they opened. There was this guy named Benson Fong, who was a Chinese restaurant magnate back then; he would move his Cantonese crew into Polynesian places if they couldn't recoup their costs, and rename them Ah Fong.

Anyway, as a 10-year-old I'd walk in the door and it was just completely all-encompassing and enveloping, this Hollywood-art-directed Polynesian theme. It was amazing to my young eyes. You just wanted to live there. And these people around me were drinking these exotic drinks. When I got old enough to drink, I sought these places out. And of course they had all disappeared at that point.

Yes, most of the tiki palaces are gone now, aren't they?

In L.A., there were so many of them for so long that a few have survived. I couldn't afford to go to any of them when I got out of school. Trader Vic's Beverly Hills location lasted right up until this year. Don the Beachcomber, the original, was there; it lasted until 1984. I lived around the corner from it at one point, but I couldn't afford to go until their last year, when they were advertising an all-you-can-eat lunch for $4.95. I finally got to go in and see that celebrity chopstick case.

Why do you think there isn't a major tiki bar in New York, which is supposed to be the cocktail capital of the U.S.?

Doing all my research, I found out that that cliché about New York thinking the tiki trend was tacky, and being above it all -- that's not true. New York had a ton of these places. It had the Hawaii Tai on Broadway, the Luau 400, which was very expensive, and they had a Trader Vic's in the Plaza Hotel, which Donald Trump famously got rid of when he bought the hotel. I think New York just burns through trends faster than other places.

The most famous tiki drink is probably the zombie. But my chances of going into a bar and getting an authentic zombie are pretty slim, aren't they?

Slim to none. The problem with the zombie is nobody knew how to make it. Donn Beach was a victim of his own success in keeping it a secret. Everybody says, "Oh, the zombie, that's an awful drink. It's just eight different kinds of rum. It's just a gimmicky, crappy drink." And the reason for that is because people were guessing. They were all just trying to guess what was in this thing, because Donn wouldn't publish the recipe. The reason we know that Trader Vic's mai tai is a good drink is because, despite the fact that there were a million awful mai tais out there, he printed the recipe himself.

Most tiki drinks have a rum base. What do you think of the theory that rum's place in the drink world today has been supplanted by vodka? So many popular fruity drinks are now built on top of vodka.

Yes. Not only that, but the rum market has been trying to become vodka for so long, that vodka has not only supplanted rum, but it's changed rum into becoming blander. It's "Bacardi: The mixable one." Rum really did have its day, though, from the 1930s, when the Don the Beachcomber thing got going, all the way into the late '70s, because even after the tiki bars died, there was still the piña colada and the frozen daiquiri. Cruise ship drinks, I guess you could call them.

You sought some of the tiki master bartenders who worked at the classic bars to get their stories. I bet they were surprised that anyone cared about their experiences.

Yeah, they were. For most of them, it was just a job and when the Polynesian thing dried up they just moved on to something else. Very few of them had a sense that this was anything else than just a way to make a living.

When I was writing the first books, it was incredibly difficult to get any information out of them. Their whole life was based on not giving these recipes out to anyone. They wouldn't give recipes out to anyone. I'd ask, "What's in this?" and they'd say, "Fruit juice." None of these guys had made one of these drinks in 40 years, but they would not part with the recipes.

Over the course of the years, you pried the secrets out of them.

It gets easier with every book.

You've said that there are only three places in the United States where you can still drink Don's original concoctions.

The Tiki-Ti in Los Angeles -- you can still get Don the Beachcomber drinks there. You have to know what drinks were served at Don's in order to pick one off the menu. A rum barrel or a panang or a montego bay.

The Mai Kai is in Fort Lauderdale. And the reason you can get Don's drinks there is the owners of the Mai Kai, when they built it in 1956, they poached a bartender from the Don the Beachcomber in Chicago specifically so they could get Don's recipes. They just tweaked the names of the drinks a little bit. The Navy grog became the yeoman's grog, like that.

The third place is a new place. I have not actually been there yet, but I've met Martin Cate, the guy who runs it. It's called Forbidden Island [Tiki Lounge] and it's in Alameda, which is in the San Francisco Bay Area. They're real Don drinks -- which he got from my books mostly.

Robert Simonson writes about theater for the New York Times, the New York Sun, Time Out New York and Playbill.com, where he is senior correspondent.