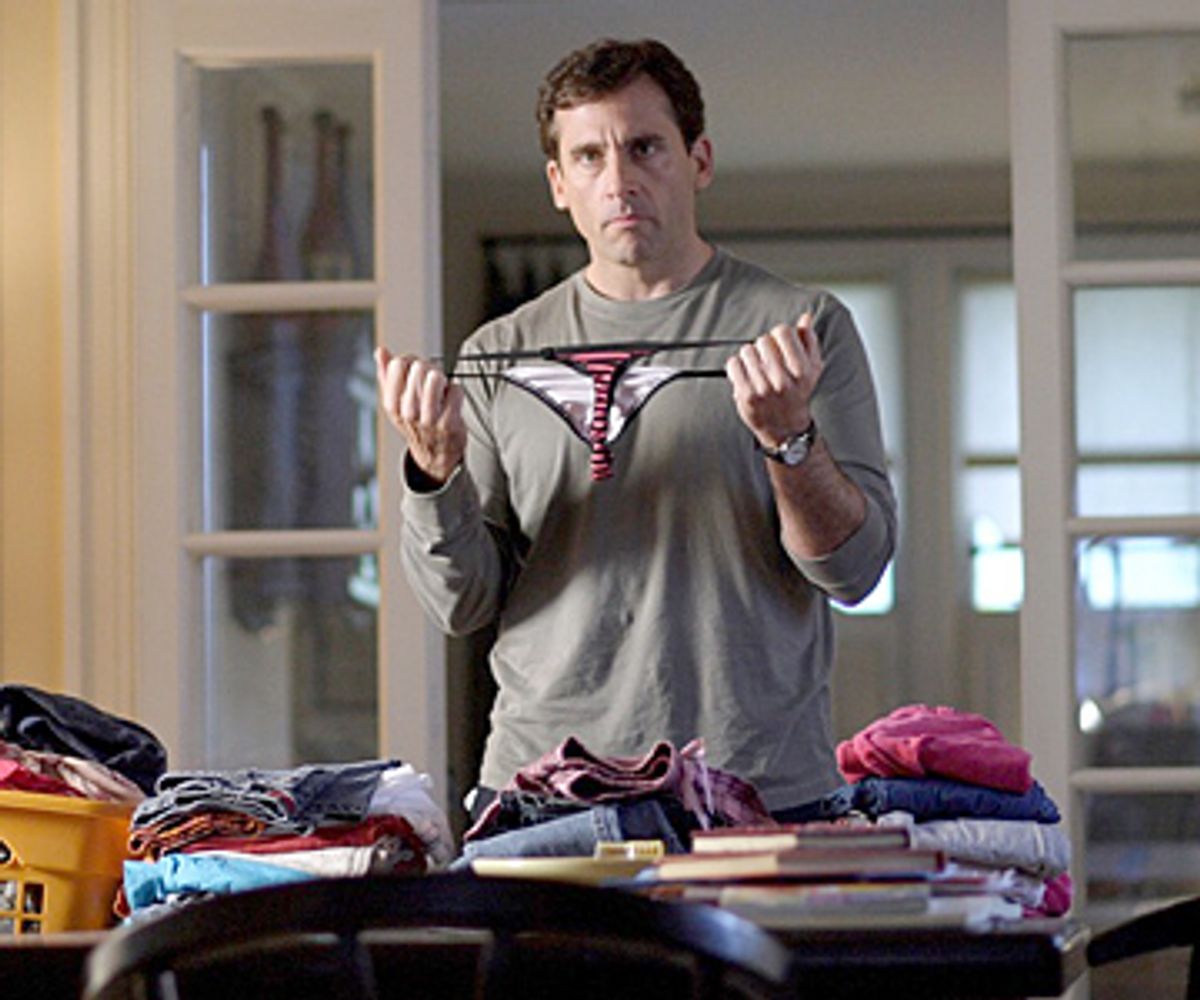 Whenever a contemporary comedy attempts to deal with how hard it is to be the parent of a teenage girl, you know a thong scene is inevitable: That moment when Mom or Dad finds the offending miniature triangular scrap in the laundry basket and holds it aloft with dismay and disbelief, thus cuing the audience to chortle with rueful recognition and sympathy. That scene comes early in Peter Hedges' "Dan in Real Life," in which Steve Carell plays Dan Burns, a newspaper advice columinist and widower who's raising three daughters alone -- so early that I feared it was a harbinger of more exhausted, threadbare parenting gags to come. But now I just think Hedges -- who also, with Pierce Gardner, wrote the movie's script -- wanted to get the thong thing over with early on, because "Dan in Real Life" is only partly a movie about parenting. It's perhaps more accurately a story about the necessity of actually living a life even as you're caring for your offspring, an argument for a kind of healthy selfishness.

"Dan in Real Life" is in many ways an old-fashioned comedy, a picture that exists well outside the more modern Judd Apatow model: There's nothing raunchy about it, and although it attempts to deal with some of the anxieties and frustrations of how we live today, it does so gently, in a way that swims easily with the mainstream, instead of cutting diagonally across. It doesn't have the weird, bright energy -- or the off-the-frayed-cuff profundity -- of the Apatow comedies "The 40 Year Old Virgin" (which made Carell something of a star) or "Knocked Up."

There's nothing groundbreaking about "Dan in Real Life" -- it's a picture that could have been made 10 or 20 years ago -- and yet its easygoing, affable nature is exactly what makes it pleasurable. There are gags (beginning with that thong) that simper, deflate and fizzle; the soundtrack features a cover of Elvis Costello's "Human Hands" that turns this lovely song from a wistful plea into an alarmingly jaunty front-porch ditty; and Dane Cook appears in a fearsomely large supporting role. In other words, there are plenty of things not to like about it. But Hedges -- who wrote the novel on which "What's Eating Gilbert Grape" was based, and also directed the bittersweet, unsentimental indie comedy "Pieces of April" -- rarely hammers anything too hard. The jokes or setups that don't work simply sail by, and the picture's lead actors -- Carell and Juliette Binoche -- carry the film lightly on their shoulders, like a well-balanced canoe. "Dan in Real Life" is a crowd-pleasing comedy that resists the urge to ingratiate itself with the audience; it's hopeful and modest, rather than calculating, in its desire to entertain.

"Dan in Real Life" opens with Dan assembling his trio of girls -- consisting of Jane (Alison Pill), the eldest, who's already thinking about college; Cara (Brittany Robertson), the middle daughter, who's thinking only about boys, and one in particular; and Lilly (Marleen Lawston), who's of kindergarten age and is suitably adorable without being unbearable -- and hauling them from their home in New Jersey to a big family reunion in Rhode Island. Presiding over the giant clan are a mom and dad played by Dianne Wiest and John Mahoney; they welcome their brood, which includes numerous spouses and sprouts, to the family summer home, one of those ramshackle-elegant turn-of-the-century New England beachfront houses that look cozy and unassuming even if you need to be a Saudi prince to afford one.

The family makes much of the fact that, several years after his wife's death, Dan is still single; the complicated weekend sleeping arrangements mean that he has to sleep on a narrow cot in the laundry room. (It's referred to, with deadpan gloominess, as "the special room.") In the morning, Dan's parents, eager to get him out of the house because he's being something of a pill, send him into town on an errand. There he meets someone -- her name is Marie, and she's played by Binoche -- who is, he's sure, the woman of his dreams. The two share coffee and a muffin; he tells her his life story. The only hitch is that, as he later finds, she's the girlfriend of his brother, Mitch (Cook), the kind of guy who goes through women like, to borrow a line from Ernie Kovacs, a dog goes through Jell-O -- except this time, Mitch believes it's really love.

What's an advice columnist, one who's also trying to prevent one of his own daughters from falling in love too hard and too fast, to do? "Dan in Real Life" doesn't pretend to be able to answer that question too patly, which is part of its charm. At one point middle daughter Cara, prevented from seeing the boyfriend she's smitten with, screams at Dan, "You're a murderer of love!" Her tone is comically bloodcurdling, but if Dan doesn't murder love, he sure as hell doesn't know how to work it, either.

Then again, who does? The fun of "Dan in Real Life" comes from watching Carell and Binoche execute their delicate, confused minuet. After the dreadful Noah's Ark fable "Evan Almighty," I'd begun to fear that Carell was already scuttling his career trajectory by making all the wrong choices. Being heartwarming -- as he was, or attempted to be, in "Evan Almighty" -- doesn't become Carell. When Judd Apatow was making "The 40 Year Old Virgin," a Universal executive, after watching some of the dailies, remarked that Carell looked like a serial killer, and he does, a little: The gleam in his eye is sometimes soft, sometimes manic, and sometimes, brilliantly, a little of both.

Carell is sometimes a bit too heartwarming even here. But his sweetness is tempered with jagged flashes of frustration and anger; it's delightful to watch him misbehave, like a petulant child, at the family dinner table. And his scenes with Binoche have a quiet, companionable, erotic energy. She's wonderful here, a lively, goofy, utterly believable presence. Binoche is one of those actresses who both look "their age" (whatever that actually is) and who appear not to have aged in 20 years: She merely continues to look like herself, and to watch her in a role like this, where she can just cut loose and be funny, is both comforting and exhilarating. Over the years Binoche -- inarguably a wonderful actress -- has become a one-woman advertisement for the more dour, punishing qualities of European art cinema. For years, I felt I'd forgotten what her smile looked like. But here, she's lively and open and vividly human, an adult woman who isn't afraid to be girlish as well. (What good is being a woman if you've lost touch completely with the girl inside?)

The big thing in "Dan in Real Life" that rings false, and loudly so, is how any character played by the frighteningly uncharismatic faux-comedian Dane Cook could land a girlfriend like this in the first place. But somehow, Hedges gives Cook enough of the right ingredients to work with, and I found myself feeling just a sliver of sympathy for his character, a statement that scares me even as I write it -- it's like saying that even the Antichrist has a few good points.

Then again, that's part of what movies are supposed to do for us: to make sure the windows haven't been painted shut, that they continue to open out. Cook's Mitch is perpetually semi-shaven, as if he were desperately trying to grow a personality: At least he's trying. That's emblematic of the generosity in "Dan in Real Life." I doubt Dane Cook will ever be one of my favorite actors. But he's edged his way up from the very bottom of the pack, if only by a whisker.