In a bid for the black church vote, the candidate is about to tour South Carolina with antigay gospel singer Donnie McClurkin at his side. He doesn't need to. 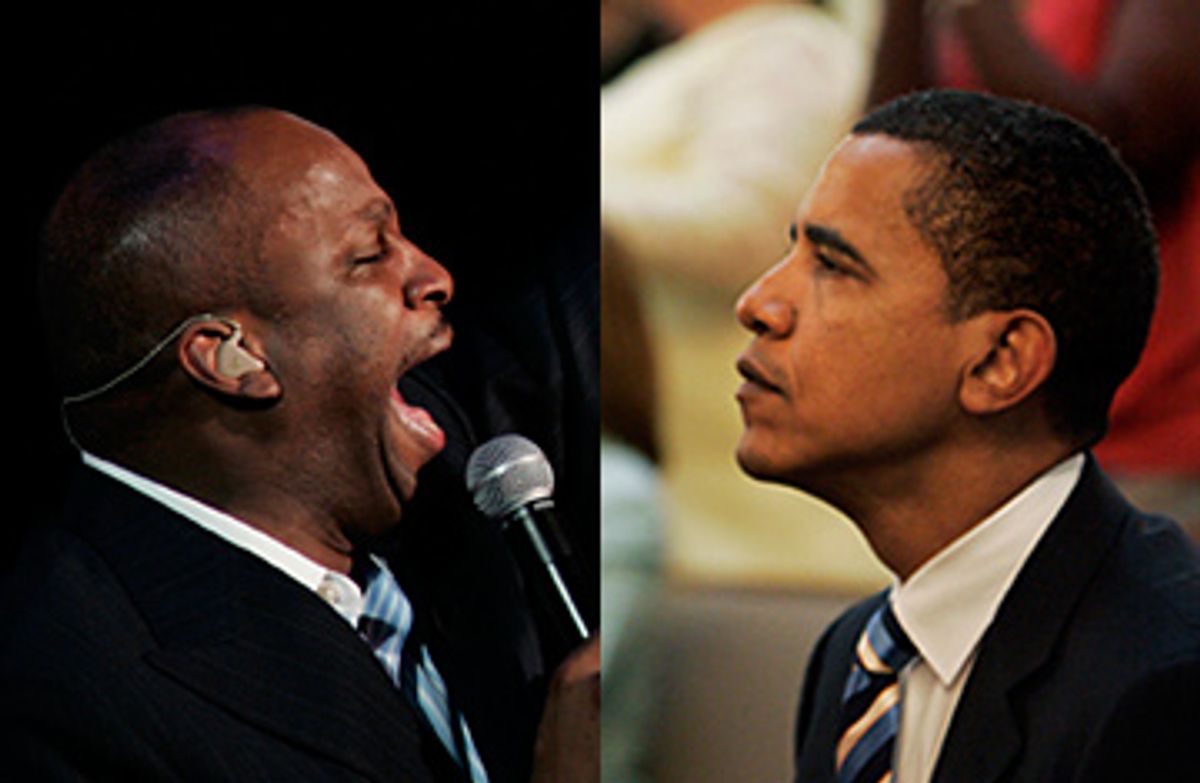 Sen. Barack Obama's decision to tour South Carolina with gospel entertainer Donnie McClurkin, a self-proclaimed "former homosexual" who believes it is his mission to turn gays straight, suggests that Obama can't live without the support of the homophobic contingent of the black community and the black church in particular. But African-American politicians have already proved that black support is not contingent on homophobia. Few people remember that in 2004, the only presidential candidate besides Dennis Kucinich to support gay marriage was the Rev. Al Sharpton -- both a mainstream black leader and a minister. Sharpton, Jesse Jackson and Obama have all spoken out in favor of gay rights and against black homophobia. So does including McClurkin on his "Embrace the Change" tour signal a retreat on Obama's part? Can tacking on an appearance by the openly gay Rev. Andy Sidden make up for McClurkin? (And wouldn't you love to be backstage on this tour?)

It may be that the realpolitik of the black church operates more subtly than the Obama campaign has yet understood. There has always been a certain degree of "give" between sacred and secular black culture. The overly serious demagogues are almost always cut down to size by larger-than-life fictional counterparts. For every Rev. Willie Wilson, the homophobic Washington, D.C., minister who claimed that lesbianism was "about to take over" the black community, there's a Sherman Hemsley playing hothead Deacon Ernest Frye on the sitcom "Amen," with black viewers laughing along. For every Donnie McClurkin, there's a pop-culture hero like Tyler Perry's drag matriarch Madea. The media tends to use the black church as a barometer of community standards, but I think in real life, black people compartmentalize more than they get credit for, the way many Irish Catholics balance their deep faith with their deep irony. Preachers may denounce gays on Sunday, but on Saturday night, a certain percentage of the congregation rented "Madea's Family Reunion," or danced and drank all night listening to R. Kelly's "Trapped in the Closet." Black culture can accommodate everything from the Winans and McClurkin to Richard Pryor and Prince, who gets away with bawdy liberalism, gender-bending and old-time religion, too.

Black American churchgoers may absorb homophobic rhetoric, and preachers may promote fear and misunderstanding, like Wilson, who claimed of lesbianism, "It ain't real." (As if he would know.) But the more general message of the black church seems to be that one should love the sinner and not the sin, and that Jesus can change homosexuals. These mandates may be misguided, but they are thankfully nonviolent, thanks to the legacy of Dr. King. Moreover, few black evangelicals here pounce on the issue with as much intolerance and vitriol as the religious in Nigeria or Jamaica, for example, where the church promotes violence against gays and homo homicide is even celebrated in the campaign songs of political parties. The ersatz black Jerry Falwells and Jesse Helmses, like Wilson, Chicago's Bishop Eddie Long and Los Angeles' Bishop Noel Jones, don't represent mainstream black thought the way those who touched the hem of MLK's garment, like Jesse Jackson, do.

Note that the backlash at Sidden's inclusion has not come from black church organizations so much as gay groups criticizing Obama for retaining McClurkin. McClurkin, for his part, hasn't even pulled out in response, though Obama has virtually done somersaults to justify McClurkin's inclusion. On Thursday, as the tour began, Obama supporters from the African-American religious community and LGBT campaign leaders collaborated on a letter to the public that attempted to clarify their candidate's decision to keep McClurkin onboard, stating, "We believe that the only way for these two sides to find common ground is to do so together."

Obama's gay advocates obviously support him regardless of this fumble. But his gay critics are right to ask why he thinks getting homosexuals to sit at the same table with antigay and allegedly "ex-gay" Christians represents some kind of balance. Had McClurkin been a Holocaust denier, my money says Obama would be "embracing a change" in his tour's entertainment lineup, lickety-split.

It shouldn't surprise anyone that Obama is playing to both sides -- that seems to be what he's best at. He means well, but you know what they say about the highways in hell. However, adding Sidden to the mix without giving McClurkin the shaft was enough of an afterthought to incense the gay community without fixing the problem. Did Obama overestimate the depth of the black community's homophobia and unintentionally solidify the stereotype about him -- that he's the white man's black candidate? Well, if Sharpton refuses to pander to the homophobic faction of the black church, why should anybody else?